Projection versus reality: Experts say Britain could fall well short of Prof Vallance’s warning of 50,000 Covid cases by October if it follows trajectory of France and Spain

Scientists have questioned whether the UK is likely to see 50,000 new infections a day by next month as projected by the Government’s chief scientific adviser.

Sir Patrick Vallance yesterday said he believed the epidemic was doubling every seven days, which would lead to 200 deaths a day by mid-November.

The chief scientific adviser stressed that there were a lot of unknowns behind those projections.

He said: ‘If, and that’s quite a big if, but if that continues unabated, and this grows, doubling every seven days… if that continued you would end up with something like 50,000 cases in the middle of October per day.’

Sir Patrick explained that the UK’s rise in cases was closely following the trends in France and Spain and pointed to a graph to illustrate this.

However, if the UK were to continue to follow the trends in these two countries, then cases would be at 10,000 a day by next month.

Sir Patrick Vallance yesterday said he believed the epidemic was doubling every seven days, which would lead to 200 deaths a day by mid-November. But figures throw into doubt some of his calculations

And if they were to jump to 50,000 a day by next month then they would be off the scale compared with France and Spain, rather than following them.

Another point of contention concerns the virus’s growth rate, the rate at which cases are increasing.

The UK’s current growth rate is somewhere between 2 and 7 per cent, according to Government figures last Friday.

But if the virus cases were doubling every day, the growth rate would be just over 10 per cent. It could be that officials expect the growth rate to increase – as it has been over the past few weeks – but this was not explained at yesterday’s briefing.

Scientists also pointed out that restrictions imposed in recent weeks, including the ‘rule of six’ and local lockdowns, would bring down the infection rate. Professor Paul Hunter, a professor in medicine at Norwich Medical School at the University of East Anglia, said: ‘What they presented is the very worst possible case, given the state of the epidemic at the moment.

‘I think it is pretty implausible we will be seeing 50,000 cases a day by the middle of October. It’s important to bear in mind that they were not making a prediction, they were presenting an illustration of what would happen if cases continued to double, which they almost certainly will not.’

He said the growth of an outbreak tends to decline as it moves towards the peak, adding: ‘It would not surprise me if we end up following the trajectory of France and Spain over the next few weeks – it’s entirely plausible we would be seeing 10,000 cases a day by the middle of October.’

Dr Michael Head, a senior research fellow in global health at the University of Southampton, said the 50,000-a-day figure was a ‘worst case scenario’.

He added: ‘We are very unlikely to see cases at that level because interventions will be rolled out that restrict the spread of the virus, such as regional lockdowns.’

Professor Whitty (right, with Vallance on the left) appealed to the public’s selflessness in adhering to the rules and not just assuming they could ‘take their own risks’

Nigel Marriott, an independent statistician, claimed that although the cases were doubling in parts of the North they were actually falling in some regions in the South.

He added: ‘This regional disparity makes the national picture hard to interpret and it suggests that the goal should be to halt the northern wave as fast as possible before it has a chance to spread to the South.’

The decision was taken by the nation’s four chief medical officers, who urged the public to follow basic hygiene and social distancing practices to avoid ‘significant excess deaths’.

Health Secretary Matt Hancock said: ‘This country now faces a tipping point in its response and it is vital everybody plays their part now to stop the spread of the virus and protect lives.’ It followed a rare televised address by Sir Patrick and Professor Chris Whitty, the chief medical officer for England.

Professor Whitty appealed to the public’s selflessness in adhering to the rules and not just assuming they could ‘take their own risks’.

He said: ‘The problem with a pandemic or an infection such as this is that if I as an individual increase my risk, I increase the risk to everyone around me and everyone who’s a contact of theirs.

‘Sooner or later the chain will lead to people who are vulnerable or elderly or have a long-term problem with Covid.’ Despite the gloomy tone of the briefing, Sir Patrick said there was a chance a vaccine could be available by the end of the year.

Boris Johnson hits reverse: PM will order pubs and restaurants to close at 10pm, tell workers ‘stay HOME if you can’ and demand police crack down hard on rule breakers in TV speech TODAY

By Jason Groves, Political Editor for the Daily Mail and Jack Wright for MailOnline

Boris Johnson will unveil a major crackdown on normal life today in a bid to halt a second wave of coronavirus.

He will drop his ‘back to work’ drive, announce restrictions on socialising and impose a 10pm curfew on bars and restaurants from Thursday.

Pubs and other venues will be allowed to serve seated customers only and drinkers will be banned from gathering in crowds. Chief medical officer Chris Whitty said yesterday it was crucial to break ‘unnecessary links between households’.

Northern Ireland last night announced a ban on families visiting other households and there was speculation England could follow suit.

Health Secretary Matt Hancock warned Covid transmission ‘tends to be in social settings, people coming around to your house, or you going out and socialising’. 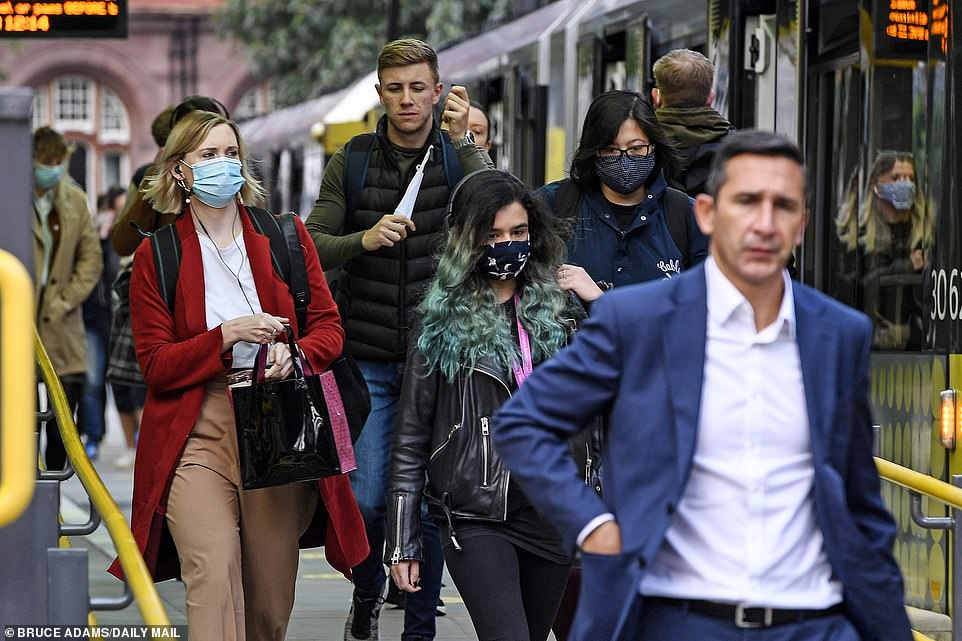 In July, Mr Johnson urged staff to ‘go back to work if you can’ in a bid to prevent city centres becoming ghost towns. But a source told the Mail that employees will be advised to ‘work from home if you can’ during the coming weeks (pictured, commuters getting into work in Manchester’s main tram stop at St Peter’s Square)

The limit on guests at weddings may also be slashed from the current limit of 30. A senior Government source last night acknowledged the Prime Minister’s ‘back to work’ drive would be paused after scientific advisers warned that workplace transmission was a concern.

In July, Mr Johnson urged staff to ‘go back to work if you can’ in a bid to prevent city centres becoming ghost towns.

But a source told the Mail that employees will be advised to ‘work from home if you can’ during the coming weeks.

The Prime Minister was reportedly set to shut down the entire hospitality sector after the Health Secretary and the Government’s scientists began pushing hard for more draconian measures, according to The Times. It is understood that the Cabinet’s economic hawks pulled him back from the brink.

The restrictions have divided the Cabinet, with Chancellor Rishi Sunak and Business Secretary Alok Sharma both warning about the potential impact on the economy. But a senior Government source insisted all ministers accepted the move was needed to bring the R-rate, which measures how fast the disease is spreading, back under control.

‘The aim is to cause maximum damage to the R and minimal damage to the economy,’ the source said. ‘Unless we act now, there will be greater economic damage later on.’

Businesses and schools will be allowed to stay open, with Government sources insisting the measures do not amount to a second lockdown. In other developments: 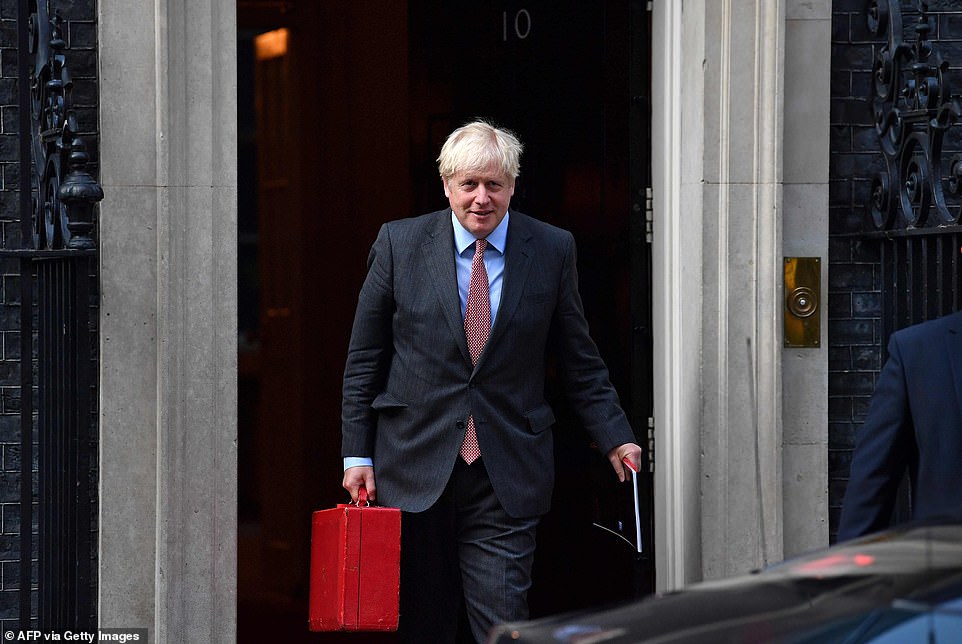 Boris Johnson will unveil a major crackdown on normal life today in a bid to halt a second wave of coronavirus. He will drop his ‘back to work’ drive, announce restrictions on socialising and impose a 10pm curfew on bars and restaurants from Thursday

A No 10 spokesman said: ‘No one underestimates the challenges the new measures will pose to many individuals and businesses. We know this won’t be easy, but we must take further action to control the resurgence in cases of the virus and protect the NHS.’

The measures announced today will be accompanied by a new push on enforcement, including more fines for individuals and on-the-spot closures for venues that fail to follow the rules.

The final package will be signed off by the Cabinet this morning and coordinated with leaders from Scotland, Wales and Northern Ireland at a meeting of the Government’s emergency committee Cobra.

The Prime Minister will unveil details of the restrictions to parliament at lunchtime before making an address to the nation at 8pm this evening.

He will urge the public to follow the ‘rule of six’, and carry on with basic measures like hand washing – or risk an even tougher lockdown in the coming weeks. Mr Hancock last night said the UK was at a ‘tipping point’ where failure to follow the rules could lead to the virus running out of control.

In a gloomy televised briefing yesterday, Mr Whitty said restrictions may have to last for six months to help the NHS cope through the winter.

The Government’s chief scientific adviser, Sir Patrick Vallance, told the briefing without action, Covid cases could hit 50,000 a day by the middle of next month, with deaths hitting 200 a day by November. 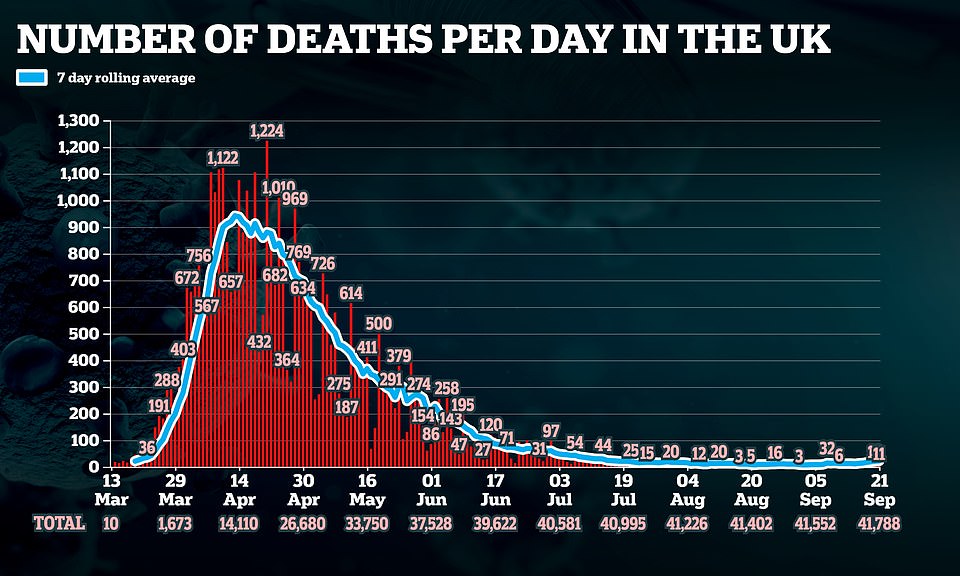 Neither of the leading scientists took media questions about their presentation, which critics said was misleading. Mr Johnson will also duck media scrutiny when he makes his televised address tonight.

The warning came amid Tory unease about the prospect of further restrictions and ‘authoritarianism’. Sir Edward Leigh warned the Government was becoming ‘increasingly incompetent’.

Sir Graham Brady, chairman of the 1922 Committee of Tory backbenchers, accused Mr Johnson of ‘ruling by decree’ and treating the public ‘like children’. One Cabinet minister told the Mail that the Prime Minister also has grave reservations about imposing new restrictions on an economy struggling to recover from lockdown.

The source said: ‘My impression is that the last thing Boris wants to do is get sucked back into another lockdown, but he is finding it very hard to resist the message from the scientists.’

The Prime Minister is understood to have found it hard to resist the demands of the Health Secretary and the Government’s scientists as panic about rising cases of coronavirus set in within official circles.

Mr Johnson was reportedly talked out of shutting the entire hospitality sector down by Chancellor Sunak and Business Secretary Sharma, who feared that drifting into a second national lockdown would devastate UK plc, according to The Times. 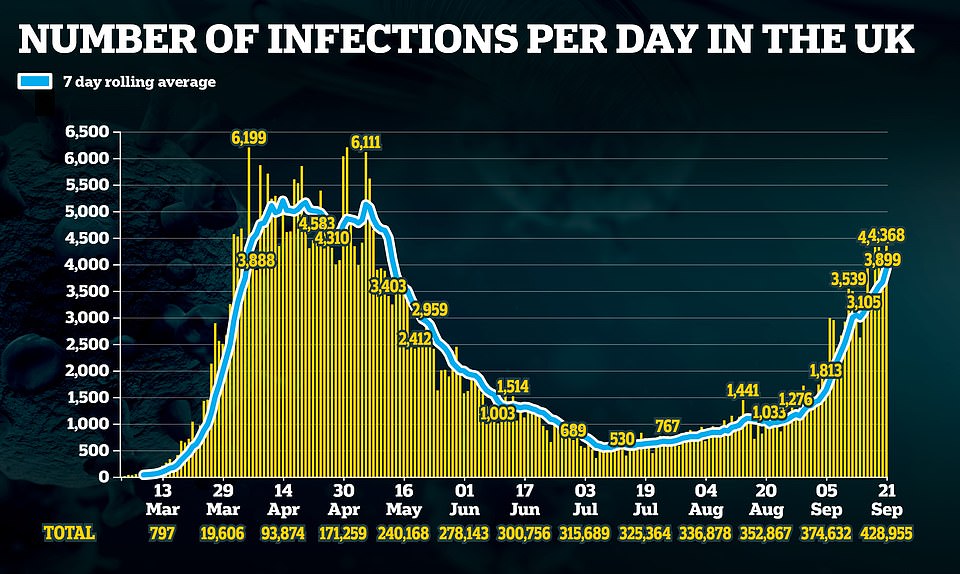