Michie suggests the mouth and nose-covering measures introduced to tackle the coronavirus pandemic should be retained to help suppress other viruses and boost public health. 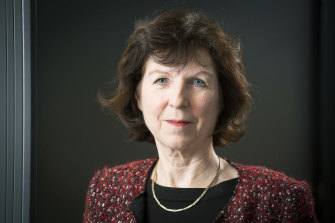 Professor Susan Michie from the Scientific Advisory Group for Emergencies which advises the British government on coronavirus.Credit:AP/File

The University College London academic, who sits on the Scientific Advisory Group for Emergencies (SAGE) that advises ministers in the US, said that alongside vaccines, test and tracing, and border controls, “people’s behaviour” was a key factor towards controlling the pandemic.

“That is the behaviour of social distancing, of when you’re indoors, making sure there’s good ventilation or if it’s not, wearing face masks, of hands and surface hygiene. We will need to keep this going in the long term and that will be good not only for COVID, but also to reduce others diseases,” Michie, told Britain’s Channel 5.

Interrupted by a follow-up questions about how long she thought the measures should continue, the professor of health psychology said: “I think forever, to some extent.” 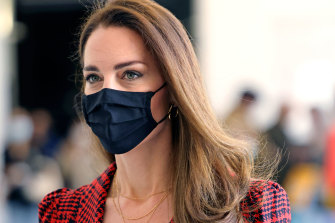 Catherine, Duchess of Cambridge wears a facemask during a visit in London last month.Credit:Getty Images

Later asked whether she thought the proposal was realistic, she said: “I think there’s lots of different behaviours we’ve changed in our lives. We now routinely wear seat belts, we didn’t use to.

“We now routinely pick up dog poo in the parks, we didn’t use to. When people see that there is a threat and there is something they can do to reduce that… [to] themselves, their loved ones and their communities, what we see now over this last year is people do that.”

Last year the US Centres for Disease Control issued guidance for widespread mask wearing affirming cloth face coverings were “a critical tool in the fight against COVID-19 that could reduce the spread of the disease, particularly when used universally within communities”. It said there was “increasing evidence that cloth face coverings help prevent people who have COVID-19 from spreading the virus to others”. 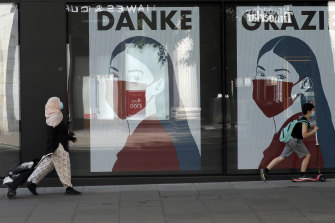 It revised the guidance last month saying Americans were no longer required to wear masks either indoors or outdoors if they had been fully vaccinated – except for rare circumstances such as being on a bus or a plane.

In Australia, only Victoria is currently mandating the use of face maskss. They need to be worn indoors and outdoors – the rule was extended after four new positive COVID cases were announced on Thursday. In NSW commuters are encouraged to wear masks on public transport but it is not mandatory.

Michie suggested that in future, people would check they had a face mask on them when they left the house in the same way they made a conscious effort to remember their phone and keys.

“It’s not going to be a huge big deal, the kind of changes we’re talking about,” she said.

Her intervention came as British campaigners demanded the government allow MPs a vote on any extension to COVID regulations beyond June 21.

Pressure is rising on Prime Minister Boris Johnson ahead of Monday, when he is due to announce whether all remaining regulations will be scrapped seven days later, as he originally.

A delay of two weeks is under consideration by ministers, amid a surge in infections fuelled by the spread of the Delta strain, first identified in India.

Legislation underpinning the rules that demand that face maskss be worn on public transport in Britain are due to expire on June 20, but could be rolled over by ministers with retrospective parliamentary approval for the move sought later.

Madeleine Stone, legal and policy officer at civil liberties campaign organisation Big Brother Watch, said: “Oversight has been completely lacking over the past 18 months. These are massive decisions of huge consequence. They need to be voted on in Parliament.”