A tiny painting long rejected as a ‘fake’ Rembrandt and consigned to a museum basement for 30 years will go back on display at an Oxford gallery after its oak panel was dated to the same tree used in his workshop in 1630.

The approximately 6in by 5in Head of a Bearded Man (c. 1630), a study in oils, was bequeathed to the Ashmolean Museum in Oxford by British art dealer Percy Moore Turner in 1951 and entered the collection as an early Rembrandt.

It was dismissed by the Amsterdam-based Rembrandt Research Project, the world’s top authority on the Dutch artist, in 1982 as a phoney rip-off painted in Rembrandt’s style by an imitator in the late 17th century – long after the master’s death.

The Project said in its report at the time that the brushwork was ‘too free’ and ‘moreover chaotic’ to be attributed to Rembrandt or a member of his inner circle.

Curators then consigned Head of a Bearded Man, which shows a elderly balding man in melancholy contemplation, to the Ashmolean’s basement for three decades. 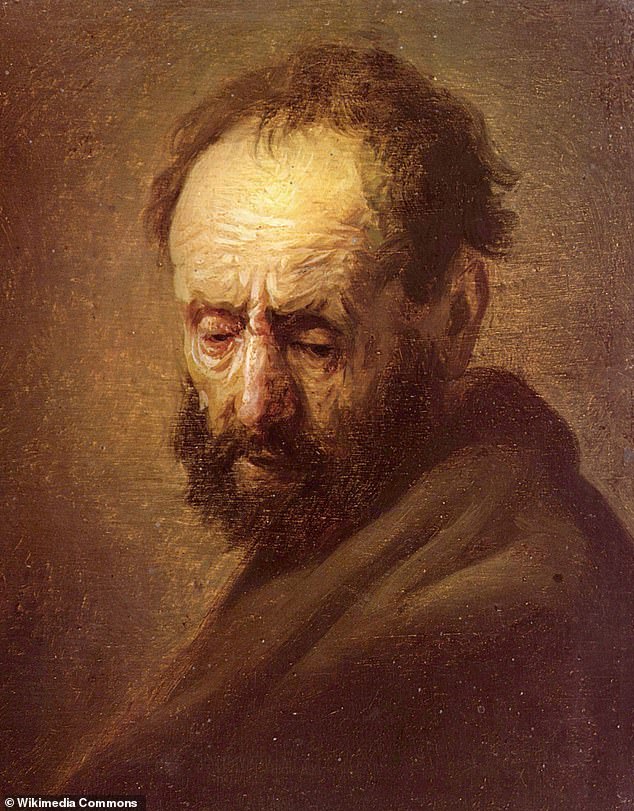 Head of a Bearded Man (c. 1630) was bequeathed to the Ashmolean Museum in Oxford by British art dealer Percy Moore Turner in 1951 and entered the collection as an early Rembrandt 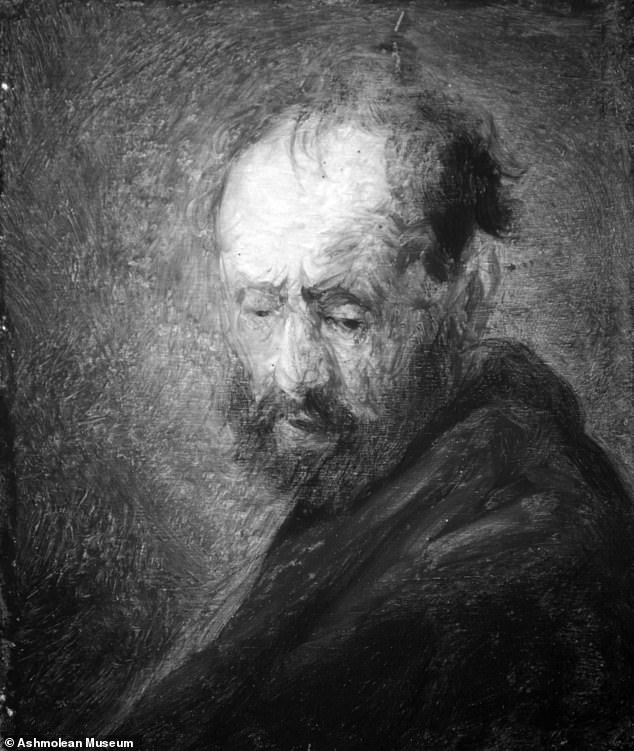 Museum curators re-examined the artwork with  dendrochronologist Professor Peter Klein, who established that the wood panel on which it is painted comes from the same tree used for two paintings by Rembrandt and Jan Lievens when the artists were working in Leiden

But ahead of the museum’s Young Rembrandt exhibition, curator An Van Camp and conservators Jevon Thistlewood and Morwenna Blewett brought it out of the stores to re-examine it with the help of Professor Peter Klein, a dendrochronologist.

Prof Klein established that the wood panel on which it is painted comes from the same tree felled in the Baltic region used for two paintings by friends and collaborators Rembrandt and Jan Lievens when the artists were working in Leiden.

Tree rings revealed that it was felled between 1618 and 1628 and that the seasoned wood would have ready for use two years later.

The Ashmolean has now incorporated the painting into its Young Rembrandt exhibition, which looks at Rembrandt’s first decade at work from 1624-34, confident in the knowledge that it came from Rembrandt’s workshop.

The postcard-sized artwork will be on view to the public until November 1, after which it will undergo further study and conservation in the Ashmolean’s labs to determine whether there is evidence of Rembrandt’s own hand in the painting. 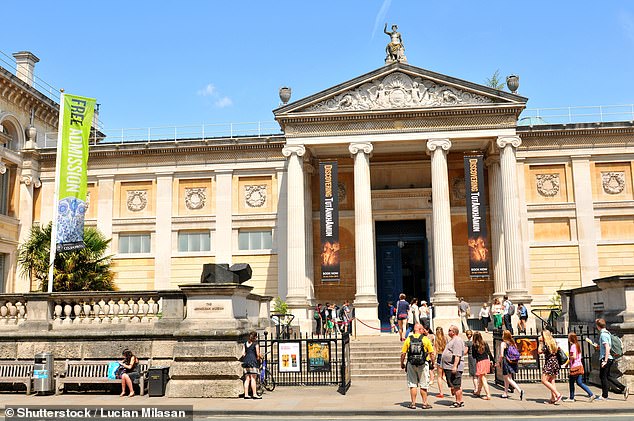 The Ashmolean in Oxford (pictured) has now incorporated the painting into its Young Rembrandt exhibition, which looks at Rembrandt’s first decade at work from 1624-34, confident in the knowledge that it came from Rembrandt’s workshop 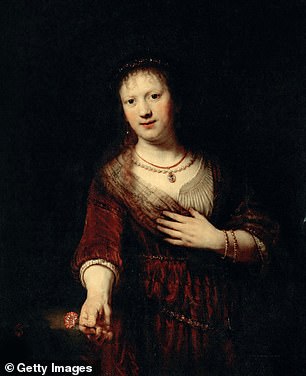 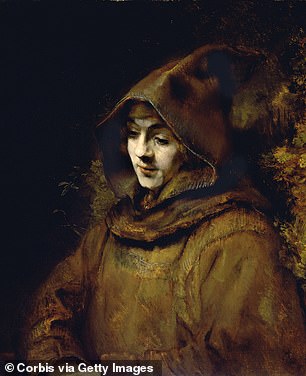 Ms Van Camp joined the museum in 2015, and became aware of the small painting that ‘no one wanted to talk about because it was this fake Rembrandt’.

Speaking to The Guardian, she revealed that she’d always doubted the painting was a fake, and jumped at the opportunity to re-examine the art for the exhibit.

‘It is what Rembrandt does,’ she said. ‘He does these tiny head studies of old men with forlorn, melancholic, pensive looks.

The museum’s curator of northern European art said that Rembrandt already had pupils and assistants in 1630, despite being only in his early twenties.

She told The Times that Heard of a Bearded Man would have an ‘honoured place’ in the Ashmolean’s walls as a product of Rembrandt’s workshop – even if the painting cannot be officially attributed to the Dutch artist. 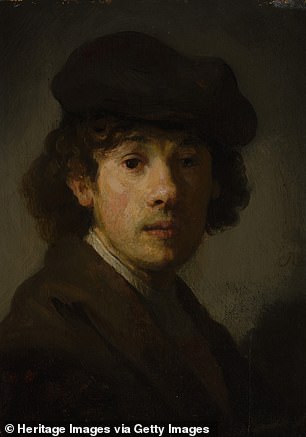 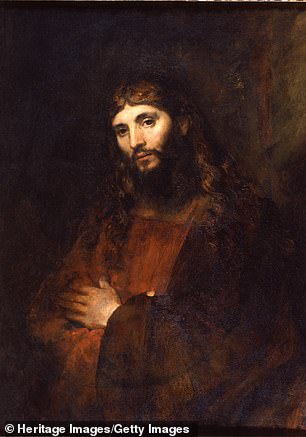 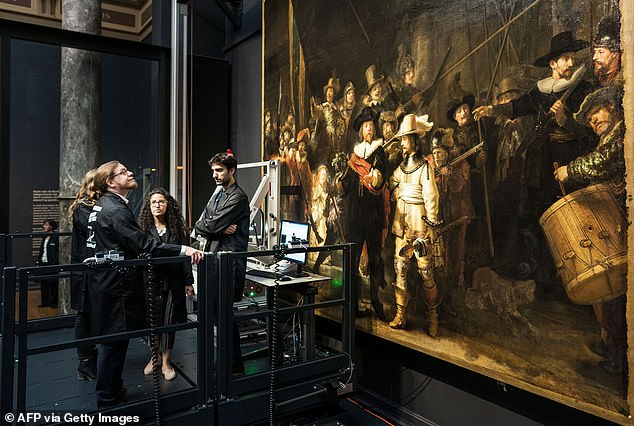 Restorers look at Rembrandt’s masterpiece ‘The Night Watch’ (1642) in Amsterdam’s famed Rijksmuseum on July 8, 2019. The last major restoration work was carried out 40 years ago

‘It is incredibly exciting to find out that a previously unidentified painting can be placed in the workshop of one of the most famous artists of all times,’ she said.

‘I am delighted to have the chance to show the panel in our exhibition where it can be seen alongside other works painted in Rembrandt’s workshop at the same time.’

She added: ‘Rubens, at the end of a painting completed by an assistant, would do a few re-touchings on the face or in the eye and he would sell it as a Rubens, so I like to imagine it’s a bit like that with Rembrandt’s workshop.’

The painting in the Ashmolean is the best quality of several depictions of the same subject. Another is in the Museum of Fine Arts in Houston, Texas.

Prof Klein said: ‘The Ashmolean’s Head of a Bearded Man was painted on a panel which came from an oak tree in the Baltic region, felled between 1618 and 1628, and used in two known works by Rembrandt and Lievens. Allowing a minimum of two years for the seasoning of the wood, we can firmly date the portrait to 1620-30.’

Mr Thistlewood said: ‘When the exhibition closes we will begin the process of restoring the painting and we can’t wait to see what we find.

‘Examination of this small painting suggests that prior to the earliest known photograph (published in 1936), touches of paint were added by an unknown hand which have considerably disrupted the subtle illusion of depth and movement.’

The Ashmolean’s exhibition first opened to the public in February but closed in March as a result of the coronavirus lockdown.

‘One of the great prophets of civilization’: The life and works of Dutch master Rembrandt (1606-69) 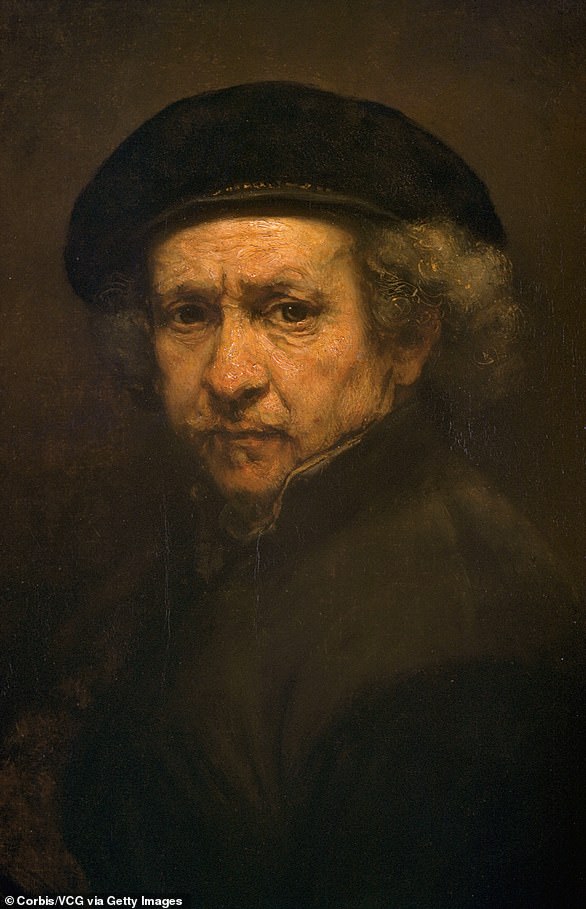 Rembrandt Harmenszoon van Rijn (July 15, 1606 – October 4, 1669) is generally considered one of the greatest visual artists in the history of art and the most important in Dutch art history.

His works depict a range of style and subject matter, from portraits and self-portraits to landscapes, genre scenes, allegorical and historical scenes, and biblical and mythological themes as well as animal studies.

He was described by Kenneth Clark as ‘one of the great prophets of civilization’ because of his empathy for the human condition.

After he achieved youthful success as a portrait painter, Rembrandt’s later years were marked by personal tragedy and financial hardships.