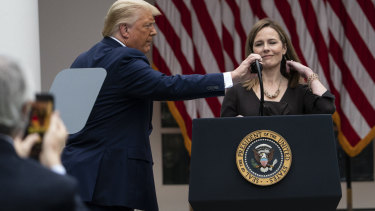 President Donald Trump adjusts the microphone as he announces Judge Amy Coney Barrett as his nominee to the Supreme Court.Credit:AP

She has seven children, including two adopted from Haiti.

Barrett was born and raised in New Orleans as the oldest of seven children. Now, the Indiana resident has seven children of her own, including two that she and her husband Jesse adopted from Haiti. The youngest of her five biological children has Down syndrome.

Barrett spoke proudly about being a working mother at a Senate judiciary committee hearing in 2017. John Peter, her adopted son, became part of the family at the age of three after the devastating Haiti earthquake of 2010, while Vivian was adopted at the age of 14 months, but was so ill that doctors were unsure she would be able to walk or speak.

“Today Vivian is a track star,” Barrett told the hearing, “and I assure you she has no trouble talking.”

But in a sign of how ugly her confirmation process is likely to be, Barrett’s family has already come under scrutiny, with former Democrat staffer Dana Houle writing on Twitter: “I would love to know which adoption agency Amy Coney Barrett & her husband used to adopt the two children they brought here from Haiti… Some adoptions from Haiti were legit. Many were sketchy as hell."

Not surprisingly, Republicans were incensed, with Missouri senator Josh Hawley, a GOP rising star, accusing the Democrats of “raw bigotry and hate”.

She belongs to a charismatic Christian group called People of Praise.

Barrett became a darling of religious conservatives during her confirmation hearings to sit on the Seventh Circuit, when Democrat senator Dianne Feinstein observed: “You have a long history of believing that your religious beliefs should prevail… The dogma lives loudly within you.”

But while her Catholicism is well known, Barrett’s connection to a small Christian group called the People of Praise – which suggests that men are the “heads” of their community – has raised some eyebrows. 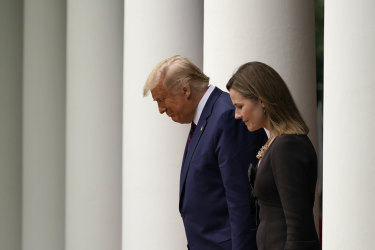 President Donald Trump walks with Judge Amy Coney Barrett to a news conference to announce Barrett as his nominee to the Supreme Court.Credit:AP

According to its website, the group was founded in 1971 in South Bend, Indiana, and has about 1700 members in 22 cities across the US, Canada and the Caribbean.

Members make a “covenant commitment”, which is a “lifelong promise of love and service to fellow community members” and must contribute 5 per cent of their gross income to the group.

“Community members agree to serve one another wholeheartedly, no matter the type of need: spiritual, material or financial,” the group says.

Barrett was not grilled about her links to People of Praise in her previous Senate hearings. However, given the high-stakes confirmation ahead, her affiliation to the group could end up being a heated topic of discussion this time around.

She’s eminently qualified for the job.

At the age of 48, Barrett will be the youngest justice on the Supreme Court, and will also be the first mother of school-aged children to ever serve on its bench.

Her record is impressive: graduating with honours from Rhodes College in Tennessee; graduating with the highest distinction from Notre Dame Law School; joining the faculty in 2002; working as a federal court judge for the past three years. 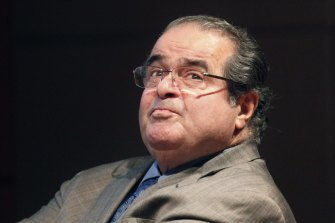 Two decades ago, Barrett also clerked for Justice Antonin Scalia, the arch-conservative who became one of Ruth Bader Ginsburg’s closest and most unlikely friends on the bench.

Scalia died in 2017, and in a move now exposed for its blatant hypocrisy, Senate Majority Leader Mitch McConnell refused to allow Barack Obama to nominate judge Merrick Garland as his replacement because it was too close to November’s election.

Barrett was reportedly Scalia’s favourite clerk, and has followed in his footsteps as a textualist judge: someone who interprets the law based on its plain meaning at the time in which it was written.

Trump was said to have been particularly impressed with Barrett last year when he was considering who should replace Supreme Court Justice Anthony Kennedy. Brett Kavanaugh ended up getting the gig, but according to Axios, the President told confidants at the time: "I'm saving her for Ginsburg."

With Barrett on the bench, the right will have at least five out of nine votes, or six if you add Chief Justice John Roberts, who is also a conservative but is not always guaranteed to vote with his bloc.

What is less clear, however, is how exactly the new Supreme Court justice might approach any push to wind back the law. In 2016, for instance, Barrett suggested that while the right to an abortion under Roe v Wade was unlikely to change in the future, it could come down to how states restrict access. 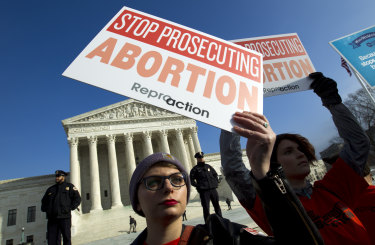 Abortion rights activists protest at the US Supreme Court during the March for Life in Washington. Credit:AP

“I think the question of whether people can get very late-term abortions, you know, how many restrictions can be put on clinics, I think that would change,” she said, during a talk at Jacksonsville University.

“The fundamental element, that the woman has a right to choose abortion, will probably stand” she said at the time. “The controversy right now is about funding. It’s a question of whether abortions will be publicly or privately funded.”

She's no stranger to contentious elections.

Two decades ago, Barrett was an associate at law firm Baker Botts where she worked on another fiercely contested litigation following the 2000 election between George Bush and Al Gore.

The November 7 poll of that year was quite a ride: TV networks first called the key state of Florida for Gore, then for Bush, before all sides accepted the results were too close to call.

That’s when the Supreme Court stepped in.

In the end, the court determined Bush had won Florida’s electoral college votes – a decision that, in turn, handed him enough votes to win the election.

According to Senate files, Barrett worked for the Republicans on the Bush v Gore case, providing “research and briefing assistance”.

This year, she may end up at the centre of another battle over the outcome of a bitterly contested result, prompting calls from Democrats and ethics groups she recuse herself from the process.

“The only way that the American people can be sure that President Trump is not using this nomination in an autocratic and nakedly political bid to secure his re-election is for Judge Barrett to make clear that she will not participate in any cases concerning the upcoming election," said the Citizens for Responsibility and Ethics in Washington this week.

Our weekly newsletter will deliver expert analysis of the race to the White House from our US correspondent Matthew Knott. Sign up for the Herald‘s newsletter here, The Age‘s here, Brisbane Times‘ here and WAtoday‘s here.

Related posts:
TV and Movies
Coronation Street spoilers: Craig Tinker ‘killed’ as he’s left for dead in armed robbery
Family quoted £25,000 for garden cabin create their own for just £5,700
Spoilers: Terrible cancer news revealed for Vanessa in Emmerdale?
EastEnders star Natalie Cassidy fears losing her dad after he fell ill
Recent Posts
This website uses cookies to improve your user experience and to provide you with advertisements that are relevant to your interests. By continuing to browse the site you are agreeing to our use of cookies.Ok