France will start offering Covid-19 vaccines to all youths aged between 12 and 18 starting on June 15, President Emmanuel Macron said on Wednesday.

During a visit to the village of Saint-Cirq-Lapopie in southern France, Macron also noted that 50 percent of French adults have now received at least one Covid vaccine jab, calling it ‘truly a turning point’ in the country’s inoculation drive.

Vaccine supplies have increased sharply recently, prompting French officials to open up appointments to all adults earlier this week, several weeks ahead of schedule.

Macron also announced that the lifting of mandatory mask wearing in France will be done gradually and on a regional basis. 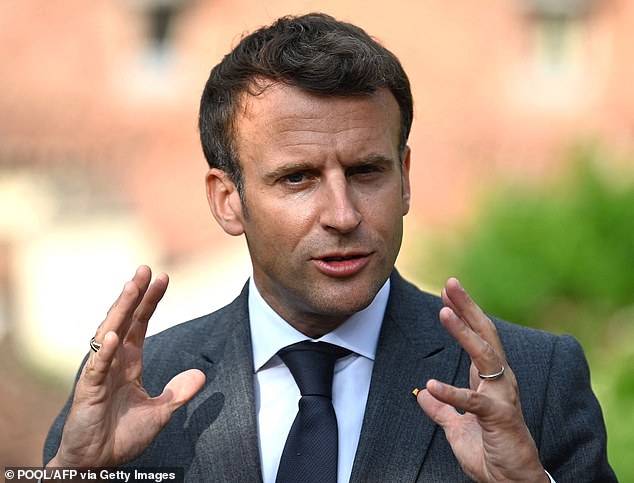 France will start offering Covid-19 vaccines to all youths aged between 12 and 18 starting on June 15, President Emmanuel Macron (pictured) said on Wednesday

The decision to vaccinate teens comes as several countries debate whether doses should be reserved first for adults who are more vulnerable to the virus, or start inoculating youths in a bid to protect more of the population sooner.

But Macron urged people to remain ‘extremely careful and vigilant,’ and said wearing face masks outdoors would still be required in several regions for the time being.

The 43-year-old president, who himself contracted Covid last December, announced Monday that he and his wife had also received the jab.

Earlier on Wednesday, government spokesperson Gabriel Attal said despite the country’s increasingly successful vaccine rollout, it would be unwise to accelerate the process of re-opening due to ‘warning signs’ in the south west of France.

‘If the overall level of virus circulation is comparable to that of early last autumn, warning signs are emerging in some areas,’ Attal said during a meeting of the Ministers’ Council.

‘In Nouvelle Aquitaine, we are seeing sometimes significant increases in the circulation of the virus, with a reproduction rate that has risen above 1, which means that the epidemic is gaining ground again,’ he said, a week ahead of the next phase of re-opening that is due in the country.

Calling on the people of France not to lower their guard, Attal added that ‘the indicators are green at the national level. This is good news which shows that the first step in lifting the restriction measures has been successful.’ 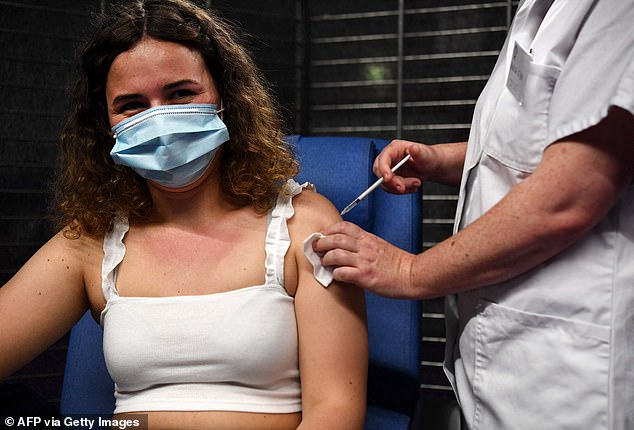 Pictured: A woman receives a dose of the Pfizer-BioNtech Covid-19 vaccine at a vaccination centre, in Garlan, western France, on May 31, 2021 after France opened vaccines up to all adults on Monday

The news comes just days after France opened up Covid-19 vaccines to all adults in the country on Monday amid fears of another deadly wave of the virus in Europe.

By doing so, France is offering vaccines to more age groups than many of its European neighbours, including both Britain and Germany.

As of May 31, France has given at least one Covid-vaccine dose to 25.8 million people, or 38.19 percent of its 67 million population, with initially high levels of vaccine hesitancy in the country apparently beginning to subside.

The start of 2021 saw vaccine chaos in France and other European nations, first related to a row with supplier AstraZeneca, and second over whether the AstraZeneca vaccine was safe for certain age groups.

Until March 2021, the AstraZeneca vaccine was only approved for use for under-65s in France over fears of blood clots, but this restriction was later lifted as it was approved for those over the age of 65 as well.

Before Monday, people over the age of 50, workers in professions that are particularly exposed to the virus, and younger adults with underlying health conditions, had been given priority go receive the jab.

But as France recovers from a devastating third wave of the virus, Macron is eager to accelerate the country’s vaccination coverage to slow the spread of new variants that could lead to further disaster to both public health and the economy.

France has registered over 5.7 million cases of the virus, which has resulted in over 109,000 Covid-related deaths.

Four coronavirus vaccines have been approved in France so far, including Pfizer-BioNTech, Moderna, Oxford-AstraZenece and the Johnson & Johnson jab.

The Pfizer vaccine has made up the vast majority of the vaccinations administered in the country so far, with the AztraZeneca making up the second most doses given. 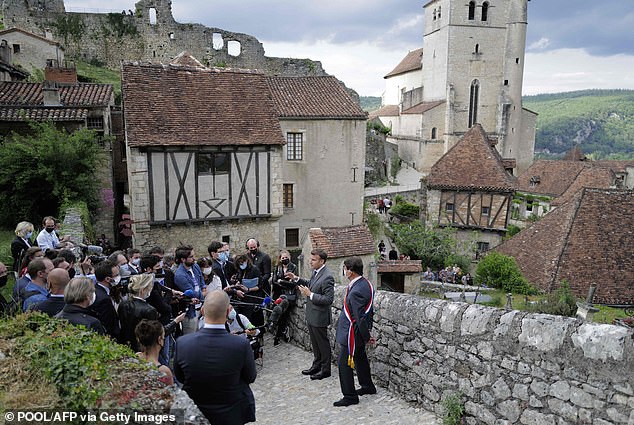 Pictured: French President Emmanuel Macron (L) and mayor Gerard Miquel give a press conference during a visit in Saint-Cirq-Lapopie, near Cahors, southwestern France, on June 2 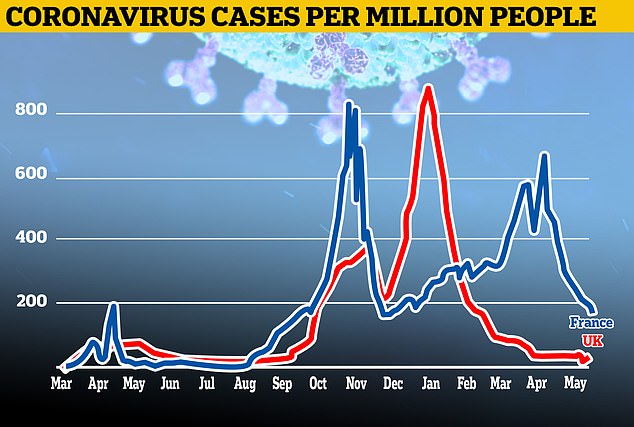 Pictured: A graph showing how the coronavirus cases per million people compare in the UK and France from March 2020 to May 2021

The country is emerging from its third nationwide lockdown, with restaurants and cafes now allowed to serve clients outside, and indoor dining scheduled to start June 9.

Pressure on hospitals has eased, with the number of Covid patients in intensive care falling steadily in recent weeks, with 2,825 serious cases as of Tuesday, down from around 6,000 in April.

Macron was in Saint-Cirq-Lapopie to launch a nationwide tour ahead of next year’s presidential election, as well as regional elections set for later this month.