The neurological disorder causes the wild animals to show overly friendly behaviour and to seem entirely comfortable around people.

According to the California Department of Fish and Wildlife, four cubs have displayed the symptoms over the last year. 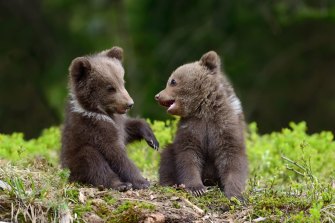 California’s wildlife has diagnosed neurological diseases in bear cubs that have been friendly to humans.

Their behaviour, which includes a subtle tilt of their heads, has confounded vets and biologists.

Videos of one young black bear became prominent on social media after it approached people at the Northstar ski resort.

The bear stepped onto a snowboarder’s board while he filmed and posted the encounter on Instagram. 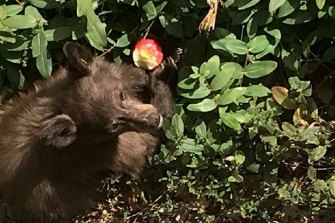 The neurologically impaired Pollock Pines black bear eats an apple in a residential backyard.Credit:California Department of Fish and Wildlife

It sat on a back yard patio, picking up an apple and eating it in front of them. Local residents said they had become attached to it.

The department spokesman said: “Physically and mentally, the bear just didn’t seem quite right, walking oddly, dull and not responsive like a normal bear should be.”

It was taken to a laboratory where veterinarians could observe the animal.

They found it had intermittent head tremors and a tilted head, indicating neurological abnormalities.

The bear was also only one quarter of the weight of an average black bear of its age.

It was eventually euthanised and a post-mortem examination was carried out.

Scientists found encephalitis, an inflammation of the brain usually caused by a virus, the fourth such recent case in the area.

Young black bears with the condition were previously identified in neighbouring Nevada.

The Nevada Department of Wildlife said there had been a growing number of encounters in the forested Tahoe Basin area, between bears displaying neurological abnormalities and humans.

Vets and biologists from the two states’ wildlife agencies met this month to assess the problem.

They have discovered five new viruses while examining the affected bears, but don’t know if any of those was responsible.

California’s black bear population has tripled over the last four decades, and is now up to 40,000.

Bears have become less inhibited around people and wandering into gardens and homes looking for food has become more common.

Their proximity to humans has also raised fears of a virus jumping species.

However, Jamie Sherman, a University of California veterinarian, told the Sacramento Bee newspaper: “The viruses that they detected in these bears were not ones particularly known to affect humans.”

Related posts:
TV and Movies
David Beckham shows off his incredible abs in holiday snap with Cruz, 16, Romeo, 18, and Brooklyn, 22
'The Pioneer Woman': The 1 Thing Ree Drummond Worries About 'More Than Anything' — and It's Not Her Cooking Show
Daisy Lowe shocked by brutal attack on her dog as a thug kicked her beloved terrier leaving him with a broken leg
Superhero Bits: Live-Action 'Powerpuff Girls' Set Photos, 'Into the Spider-Verse' Sequel Rumor Debunked & More
Recent Posts