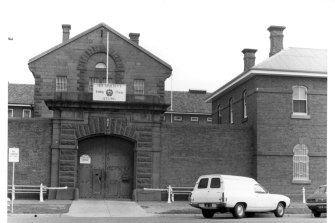 Detectives think six men may have originally intended to escape, but two “chickened out” at the last moment.

To ensure the two would not raise the alarm their companions tied them up and hit one on the head with an in bar. It was one of the most daring mass escapes in the 120-year history of the prison.

Detectives and prison officers believe weeks of research and planning went into the escape.

Two of the escapers were serving long sentences for rape. All four are described by police as dangerous.

They made their escape from the gaol’s machine room where they were making jeans and curtains.

At 2.40p.m. the men removed the louvre windows, and sawed through a vertical iron bar.

This is when the men are thought to have argued about some facet of the escape.

During the next three minutes the four men slid 20 metres down a make-shift denim rope, ran unseen across a courtyard which is closed at weekends to prisoners, scaled wooden trestles propped against the inside of the outer wall, and then dropped 8 metres into the street.

A passerby spotted them as they dropped on the pavement and ran along Swanston Street. He telephoned police.

He is heavily tattooed on his arms and legs, is of medium build and has a skin-head-type haircut.

Johnson was serving 12 years for rape, robbery and larceny, and breach of parole.

He has a scar on his left chest and has a crew-cut hairstyle.

McKinley, who is heavily tattooed, was serving two years for breach of parole and burglary.

Rodaughan was serving 18 months for burglary, theft of a motor car and unlawful possession.

He has several tattoos including a winged skull, a snake and wolf’s head, a panther and a mermaid. The word “HATE” is tattooed on his right fingers.