Gavin Williamson has hit back at claims he was on holiday as the A-Level results fiasco unfolded in the UK, saying he was only in Scarborough to visit his relatives.

The under-fire Education Secretary added that he has also cancelled his family’s holiday to remain in the country and deal with problems caused by algorithms downgrading student results.

Mr Williamson was in the northern seaside town for a week from August 2, and returned just days before the A-level results came out on August 13.

It is also understood that he cancelled a key meeting with the department while he was in North Yorkshire.

‘I cancelled our family holiday abroad this year to focus on the challenges COVID-19 created for the education sector,’ he said in a tweet.

‘Over the summer, I went to see family in Scarborough for the first time since lockdown, and while there I was in constant communication with the Department.’

It comes as one of Mr Williamson’s Education Ministers was heavily criticised for enjoying a holiday in the French Alps while teenagers in Britain went ‘through hell’ over their exam grades. 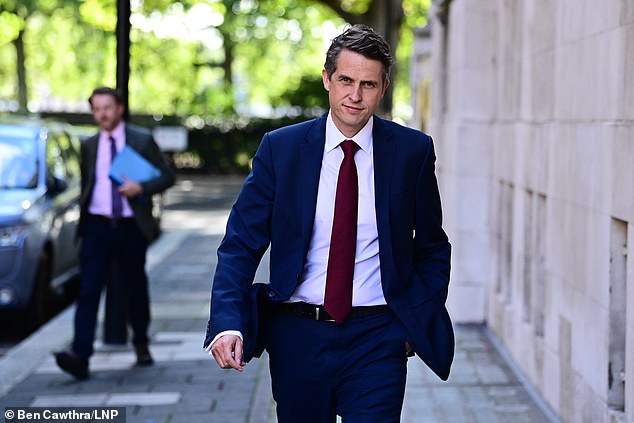 Gavin Williamson has hit back at claims he was on holiday as the A-Level results fiasco unfolded in the UK, saying he was visiting relatives in Scarborough instead

The Mail on Sunday revealed that as students worried over their futures, Gillian Keegan enjoyed hiking trips, mountain biking and dips in a mountain lake – and boasted about them on Instagram.

Astonishingly, beleaguered Mr Williamson found time to ‘like’ several of her posts.

Mrs Keegan is Minister for Apprenticeships and Skills at the Department for Education and, crucially, is jointly responsible for post-16 education strategy.

But as the exam fiasco reached its climax, she decided to remain in France – even as quarantine restrictions came into effect that would require her to self-isolate for 14 days on her eventual return to the UK.

On August 15, two days after the A-level results in England were released, she wrote on social media: ‘We will have to make the most of it [our holiday] as we will be #quarantined for 14 days when we get back’. The post was accompanied by an emoji of a woman shrugging. 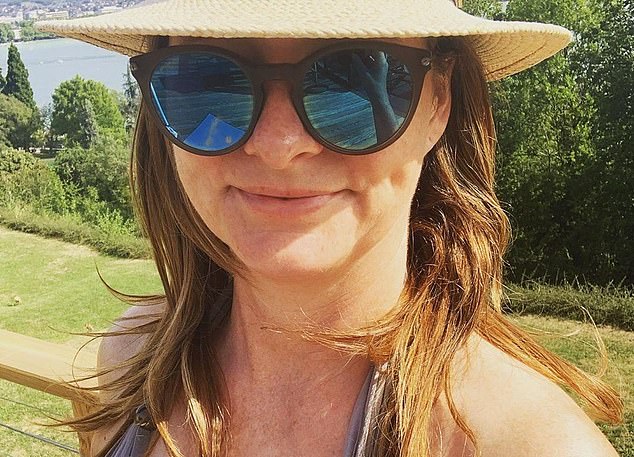 The Mail on Sunday can reveal that as students worried over their futures, Gillian Keegan enjoyed hiking trips, mountain biking and dips in a mountain lake – and boasted about them on Instagram. This picture was posted on A-level results day

Despite posting a new message and picture yesterday announcing that she was ‘back to Blighty’, Mrs Keegan did not respond to this newspaper’s requests for comment about her getaway.

However, she now faces the prospect of being unable to attend the Commons in person when it resumes on September 1 because she may still be in quarantine.

Supporters sprang to Mrs Keegan’s defence, saying she had not hidden the fact she was away and that fellow Minister Michelle Donelan, who shares duties for post-16 education strategy, had been on duty. They stressed that Mrs Keegan, a self-professed ‘proud Scouser’ who is MP for Chichester, had done some work while she was away.

‘She wasn’t just sitting with her feet up all the time,’ one said.

But Labour last night described her conduct as ‘beyond belief – even for this gaffe-prone Government’. 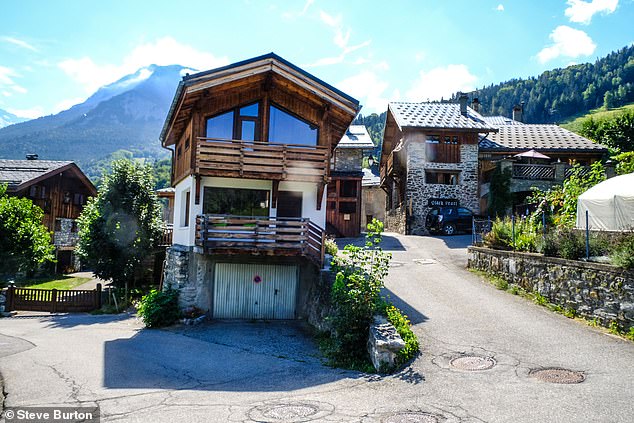 Rural chalet in the French Alps where Mrs Keegan spent her holiday. Mrs Keegan is Minister for Apprenticeships and Skills at the Department for Education and, crucially, is jointly responsible for post-16 education strategy

Labour MP Neil Coyle said: ‘Gavin Williamson’s incompetence truly knows no bounds. Young people who have been put through hell over the last few weeks will be disgusted to learn that one of the Ministers involved in this mess has been living it up on holiday in France.

‘But instead of Mr Williamson recognising he needed all hands on deck as this exam disaster loomed, he not only let her swan off on holiday, he even liked her holiday snaps.’

Mr Williamson’s response to the exam crisis has been met with a mixture of ridicule and anger as thousands of teenagers were left devastated when their predicted grades were downgraded, jeopardising their university places, before Ministers were forced into a humiliating U-turn.

Boris Johnson is understood to have rejected Mr Williamson’s offer to resign but the Education Secretary’s decision to allow one of his junior Ministers to be on holiday as crisis deepened raised fresh questions over his judgment.

Mrs Keegan, 52, announced on Instagram on August 6 that she was staying in Courchevel, an Alpine resort popular with the rich and famous. Posting a series of photographs over the following days, she spoke of ‘good vibes’ and even celebrated her rest and relaxation on the very day that A-level results were released. 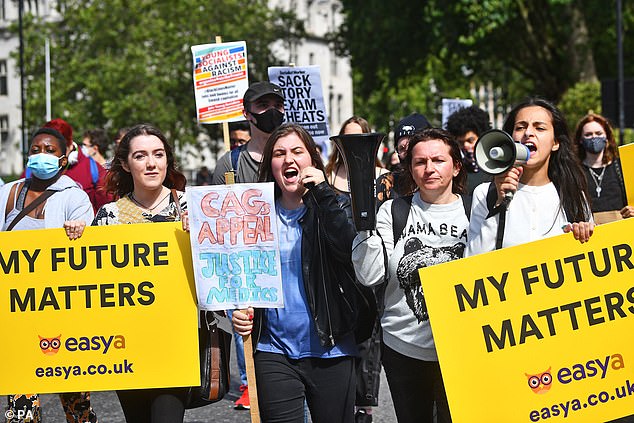 Mr Williamson’s response to the exam crisis has been met with a mixture of ridicule and anger as thousands of teenagers were left devastated when their predicted grades were downgraded, jeopardising their university places, before Ministers were forced into a humiliating U-turn. Students are pictured on a march to the Department of Education on Saturday

Mr Williamson ‘liked’ several of her posts including one on August 6 captioned: ‘Made it to our happy place for a few days #hiking #biking #wildswimming and whatever adventures we can find to clear the mind.’ But back home, the media was warning of an impending schools crisis following the earlier fiasco over exam grades in Scotland.

As the UK became awash with dire reports that schools were bringing in lawyers to stop results being dramatically reduced, Mrs Keegan posted a picture of a dip in a lake at Le Praz. It was captioned: ‘Another wonderful day.’

Two days later, beside a picture of sun-kissed mountain, she wrote: ‘Wonderful view from our balcony… #goodvibes.’

On August 11, just 48 hours before the A-level crisis peaked, she was enjoying ‘another wonderful day #hiking in the mountains’. Again, Mr Williamson found time to ‘like’ the photograph.

Finally, as A-level results day arrived in England on August 13, Mrs Keegan’s horizon did darken but only because of news that British holidaymakers in France would shortly face two weeks of quarantine when they returned to the UK because of soaring French infection rates. Her post contained an eye-rolling emoji to indicate her frustration, but her photograph depicted smiles and sunglasses

Mrs Keegan decided not to try to get back before the quarantine deadline, apparently with Mr Williamson’s blessing. On August 15, he ‘liked’ her message from the Alps where, with glass in hand, she declared: ‘We will have to make the most of it as we will be #quarantined for 14 days when we get back.’

The Mail on Sunday reported the next day how one distraught A-level student told Schools Minister Nick Gibb: ‘You’ve ruined my life.’ But Mrs Keegan simply acknowledged that she would have to quarantine on her return with her husband, writing: ‘Good job we like each other’ – another message liked by Mr Williamson

Finally, on Tuesday last week, amid mounting expectation that her boss would now lose his job, the Skills Minister posted about her pizza in Courchevel. Some may now be recommending humble pie.

Another wonderful day in the Alps, shame about the disaster at home 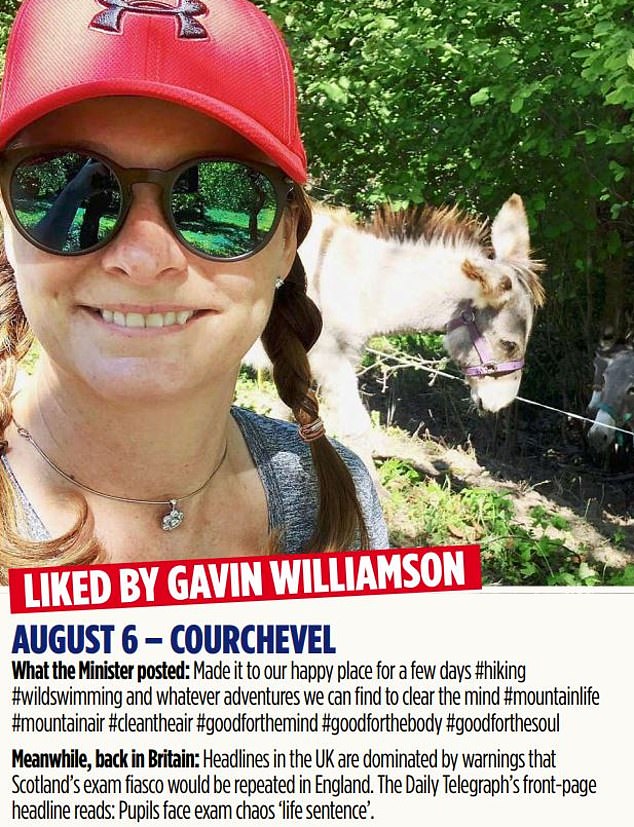 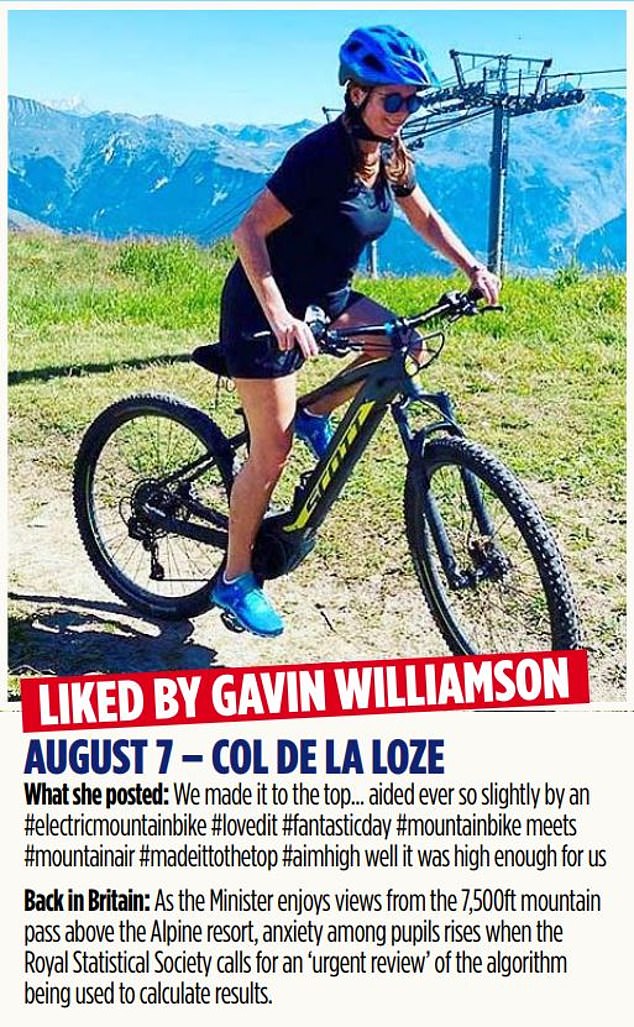 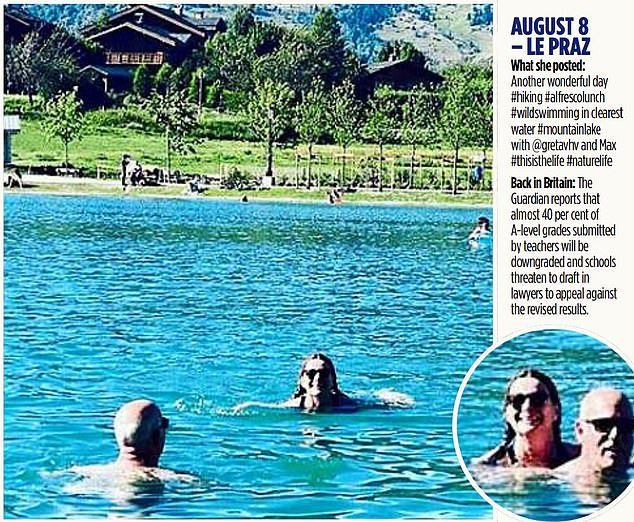 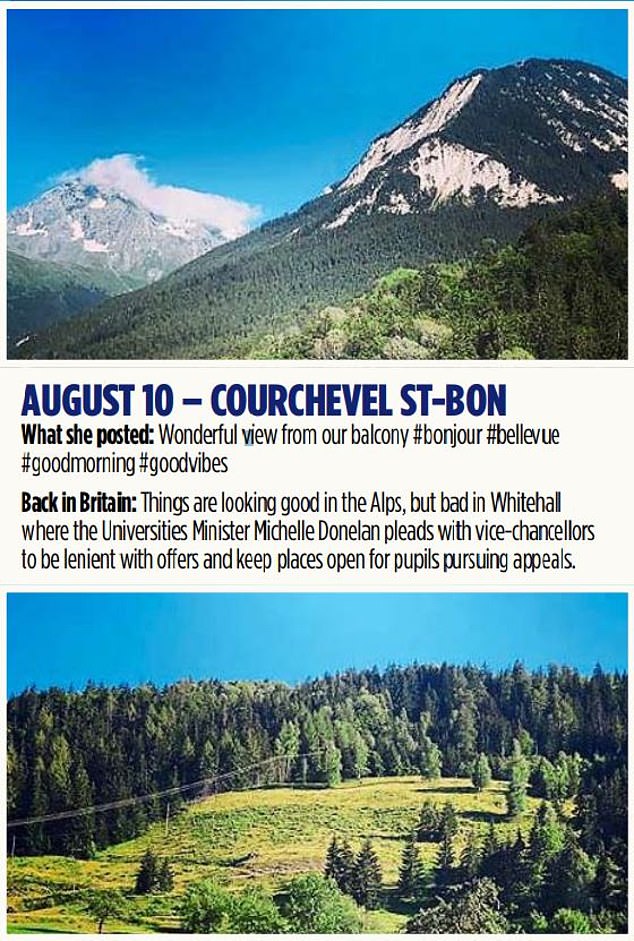 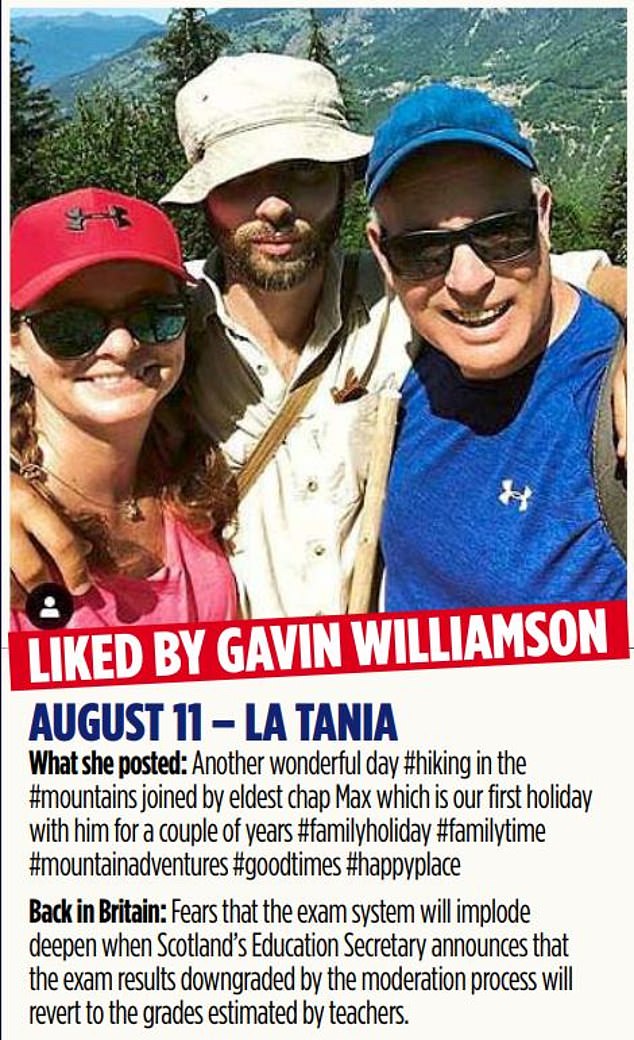 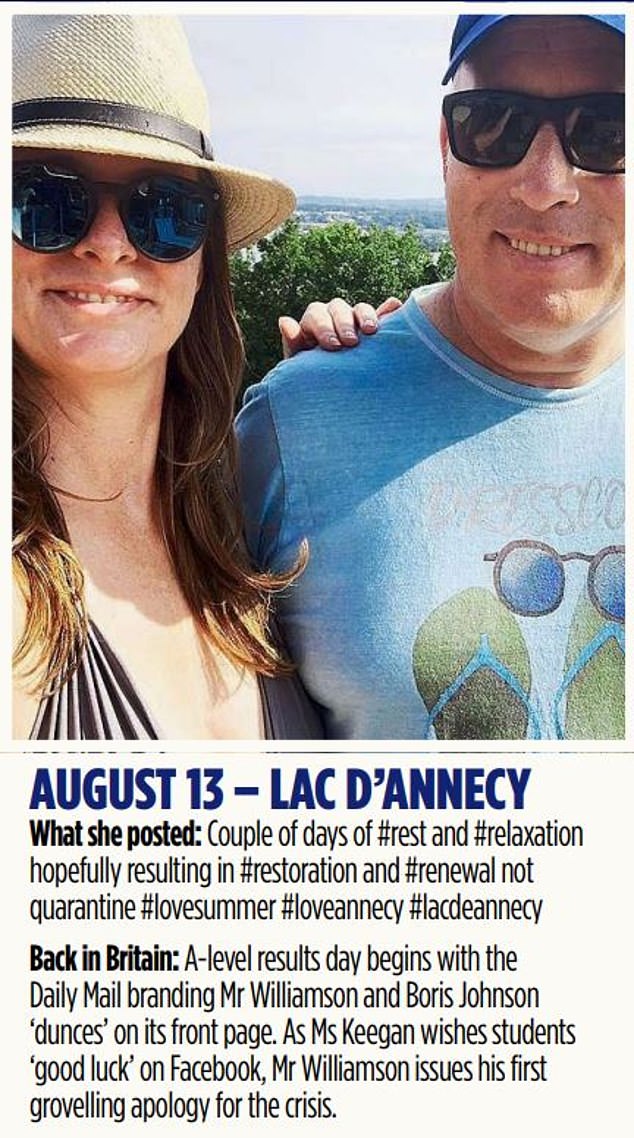 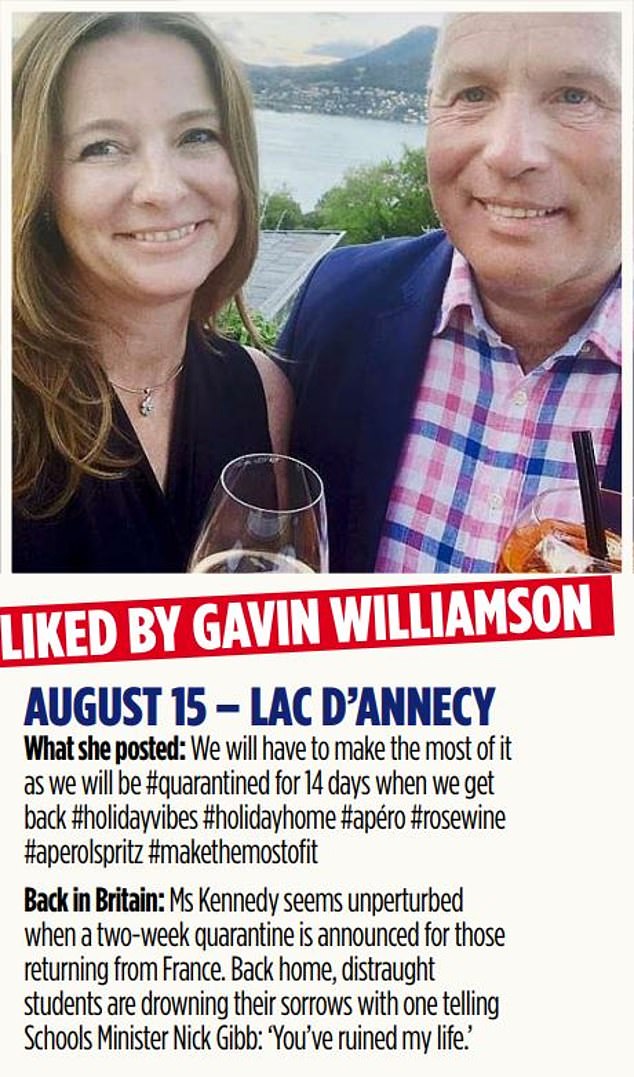 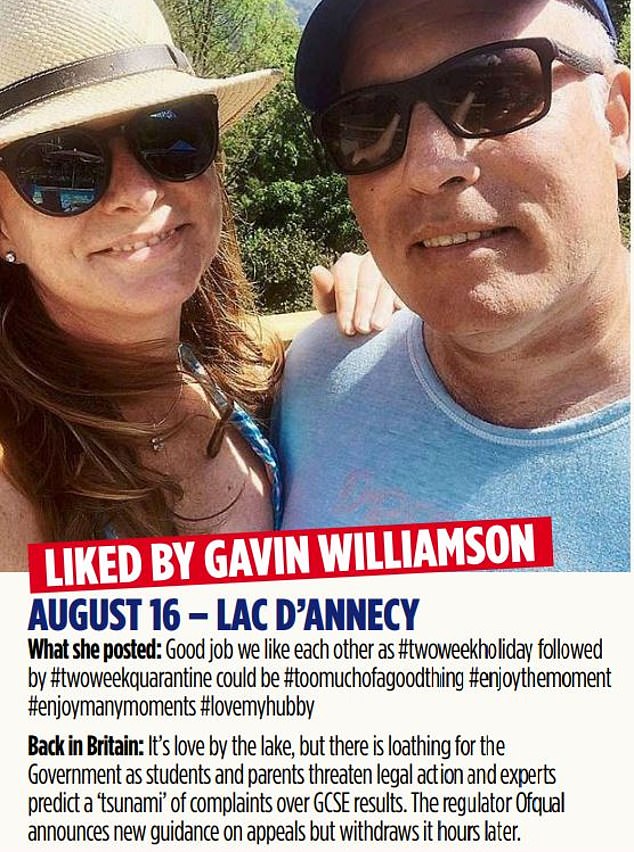 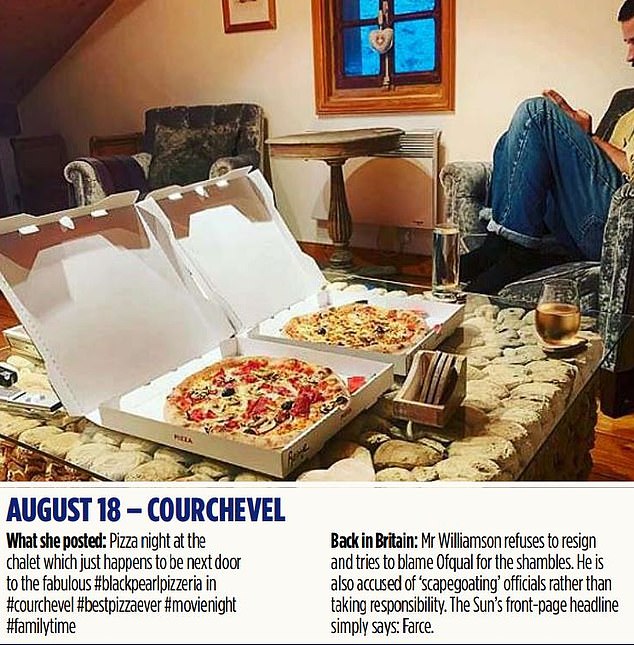 By Glen Owen for the Mail on Sunday

Gavin Williamson last night faced fresh pressure over his handling of the A-levels crisis after it emerged he took a seaside holiday in the run-up to the fiasco.

The Mail on Sunday understands the Education Secretary took a break in Scarborough for a week from August 2, returning just days before the A-level results came out on August 13.

An algorithm used by the exams regulator Ofqual resulted in an astonishing 40 per cent of grades being downgraded from teachers’ predictions, meaning thousands of devastated students were turned down by their first-choice universities.

It is also understood that Mr Williamson cancelled a key meeting while he was in North Yorkshire. 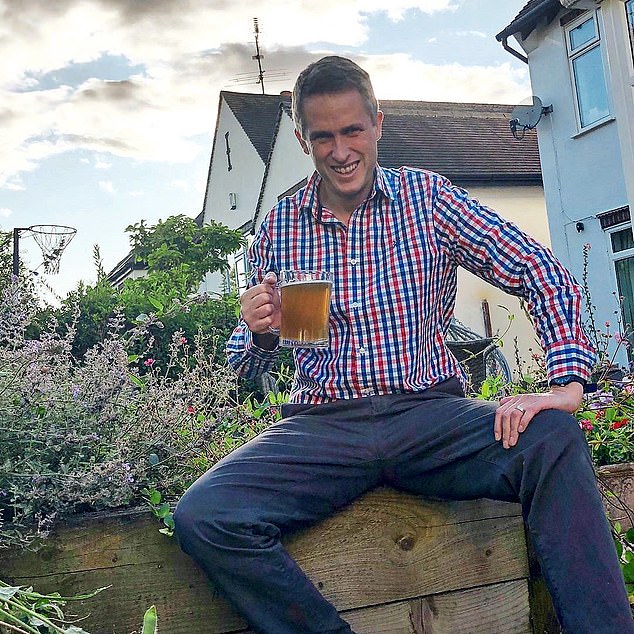 Mr Williamson is fighting to keep his place in the Cabinet after initially insisting the algorithm was ‘robust’, and there would be ‘no U-turn, no changes’ – before performing a humiliating U-turn in the face of growing protests from students.

Sir Jon Coles, a former director-general for schools at the Department for Education, added to the pressure by saying he warned Mr Williamson directly in early July that the algorithm could give hundreds of thousands of students inaccurate results.

Last night, a spokesman for Mr Williamson said the trip to Scarborough did not count as a holiday because he was ‘working every day’.

The spokesman said: ‘It was the only chance for him to go to see his mum and dad, who he had not been able to visit during lockdown. It wasn’t a holiday as he was working every day and continuing to hold meetings remotely.

‘In addition, he cancelled a foreign holiday to ensure that he could be in the country when the results came out.’

The revelation came as protesters gathered outside the Department For Education yesterday, chanting ‘Get Gav Gone’ and ‘We are the future’.

Protest organiser Glen Morgan-Shaw said: ‘We are going to call them out on the fact they are doing everything to protect themselves when they should be protecting the people.’

Following the U-turn, the Government has asked universities to prioritise students from disadvantaged backgrounds for admission ‘where possible’.

Downing Street sources say they are not going to give into calls for Mr Williamson’s sacking because they ‘back their people’. Mr Williamson played a key role in the campaign to elect Mr Johnson as Tory leader.