The United States has angered Germany and France after allegedly seizing millions of masks set to be shipped to the European nations amid the coronavirus crisis.

On Friday, German officials hit out at America for ‘intercepting’ 200,000 masks they had ordered from a 3M factory in China.

As 3M is an American-owned company, the US was able to ‘confiscate’ the shipment of special FFP2 and FFP3 masks which were on their way to healthcare workers battling the COVID-19 outbreak in Berlin.

‘You don’t treat your transatlantic partners like that,’ he is further quoted as saying in The Financial Times.

Geisel called on Germany’s government to ‘press the US to stick to international rules’, while Berlin’s mayor accused President Trump of ‘lacking solidarity’ following the seizure of the shipment.

President Trump is desperately trying to secure masks and other personal protective equipment for Americans as the nation’s emergency stockpile depletes. 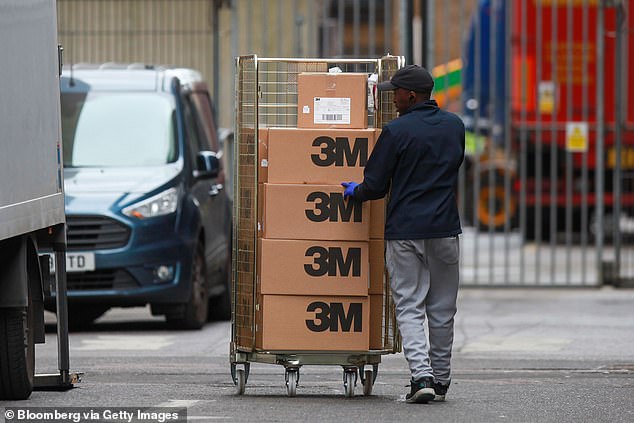 The United States has angered Germany and France b allegedly seizing millions of masks which were set to be shipped to the European nations amid the coronavirus crisis. erman officials hit out at America for ‘intercepting’ 200,000 masks they had ordered from a 3M factory in China. Stock image 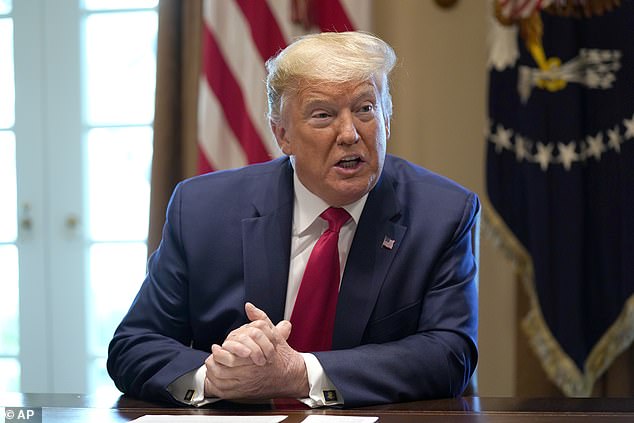 Berlin officials called on Germany’s government to ‘press the US to stick to international rules’, and accused President Trump of ‘lacking solidarity’ following seizure of the shipment

On Thursday, the Commander-in-chief ordered 3M to manufacture more masks for Americans as the coronavirus infection rate in the US soared above 258,000. More than 6,600 have died.

Meanwhile, Germany has clocked 90,964 cases and 1,234 deaths as of Friday afternoon.

The United States has also earned the ire of France, where 64,338 people have tested positive to COVID-19, and 6,507 have died.

On Thursday, US buyers paid three times the going rate to secure a shipment of face masks from China that were due to be dispatched to France, two French officials claim. The US has denied the allegation.

Paying cash to divert the air cargo to the US, the buyers are said to have commandeered the shipment of masks as they sat on a plane at Shanghai airport ready for take off.

The order of several million masks had been due to arrive in part to the Grand Est region in north west France, an area where intensive care facilities are already struggling to cope with the volume of coronavirus patients.

Jean Rottner, a doctor and president of the GrandEst regional council, told RTL radio that the US buyers had turned up on the tarmac offering cash. 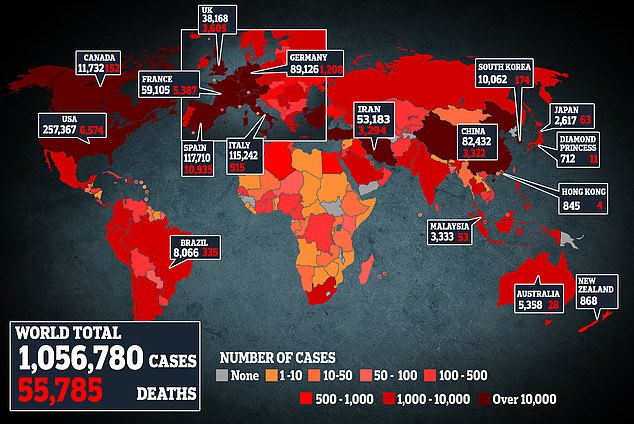 More than one million people across the world have tested positive to COVID-19, with more than a quarter of cases occurring in the United States 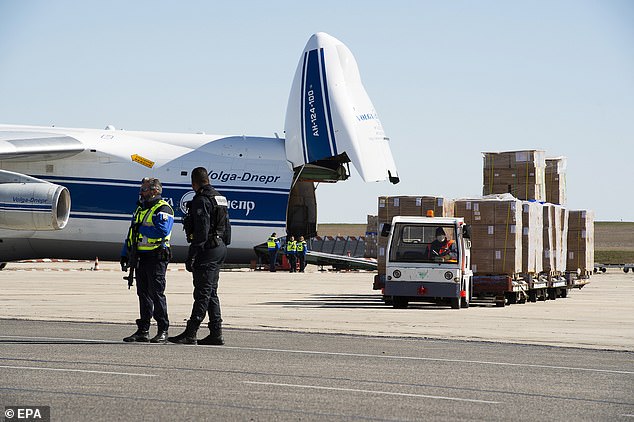 Boxes being unloaded from an Antonov 124 aircraft transporting 10 million face masks ordered by France from China at the Paris-Vatry Airport in Bussy-Lettree, eastern France, 30 March

He said: ‘On the tarmac, they arrive, get the cash out … so we really have to fight.’

The leader of the Ile-de-France region, which includes Paris, also accused unidentified Americans of swooping in with cash at the last minute to secure shipments already promised to French buyers.

Valerie Pecresse, the chief of France’s most populous region, said: ‘We lost an order to the Americans who outbid us on a shipment that we had lined up.’

Pecresse claimed that while France pays on delivery for such supplies – crucial in the global fight against the pandemic –  ‘Americans pay cash’ without bothering to see the goods. 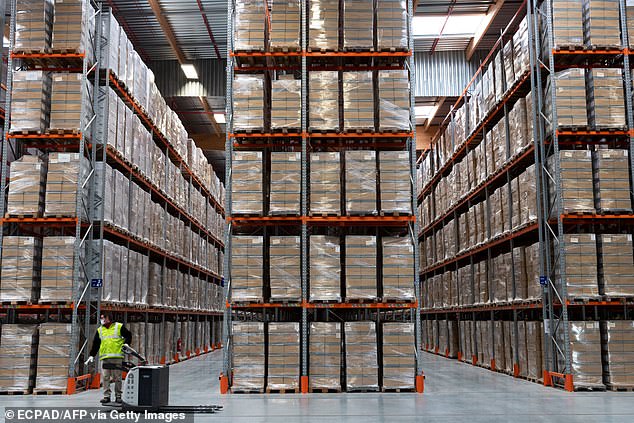 A worker next to cargo unloaded from a different plane carrying 10 million face masks ordered by France from China, at the Paris-Vatry Airport in Bussy-Lettree, eastern France, 30 March

They ‘are just looking to do business on the back of the whole world’s distress,’ she told LCI television.

France has ordered 1 billion face masks due to be delivered within the next 14 weeks and has deployed an air-bridge flight with China to deliver them amid the ongoing covid-19 pandemic.

A senior US official on Thursday rejected allegations from French politicians that Americans had accroached the French shipment during the coronavirus crisis, calling the stories ‘completely false.’

In Washington, a senior administration official told AFP ‘the United States government has not purchased any masks intended for delivery from China to France.’

‘Reports to the contrary are completely false,’ said the official, asking not to be named.

Canadian Prime Minister Justin Trudeau on Thursday asked officials to look into similar claims that masks were being diverted from his country, calling such reports ‘concerning.’ 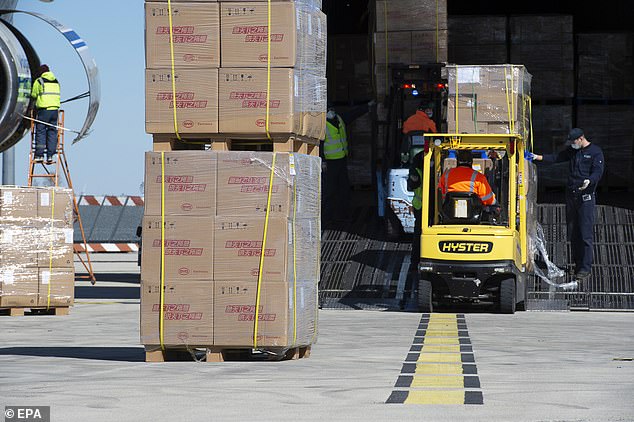 ‘We need to make sure that equipment that is destined for Canada gets to and stays in Canada, and I’ve asked ministers to follow up on these particular reports,’ he told a press conference.

Ottawa has recognized that its stockpiles of protective medical equipment are not enough to meet demand, as it looks to care for a surge of infected patients and slow the spread of the virus.