Germany suffers worst daily spike in coronavirus cases since May with 1,226 new infections as health minister warns alcohol-fuelled parties are partly to blame for the rise

The seven-day average of new cases is now above 900, having been as low as 350 a month ago.

Angela Merkel’s health minister said today there were outbreaks happening in almost all of Germany and warned that every new case was making track-and-trace procedures harder.

He added that the rise was partly being driven by parties and family gatherings – warning that the virus can spread quickly ‘when there’s alcohol involved’. 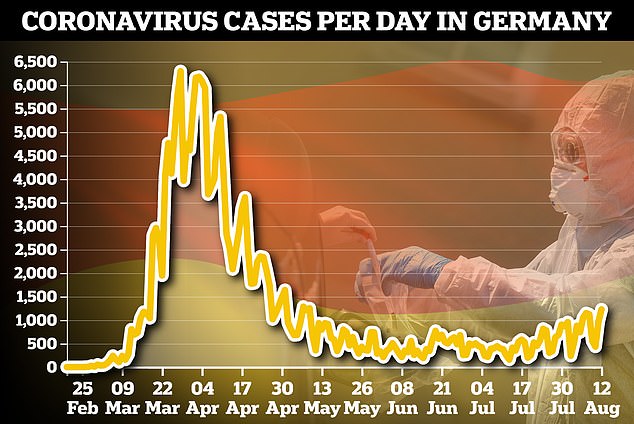 Germany today suffered its worst daily spike in coronavirus cases since May 9 as 1,226 new infections were added to the tally 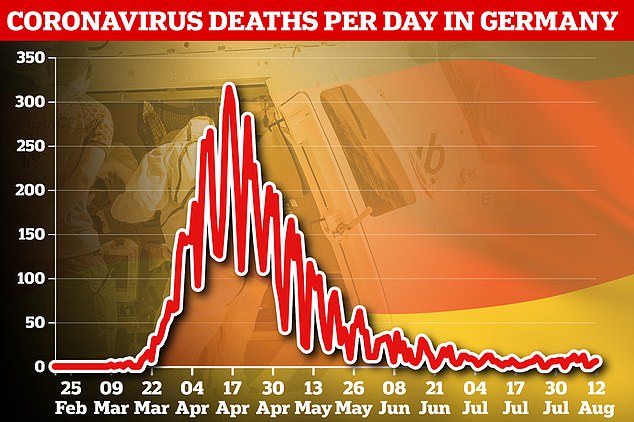 Having not seen 1,000 cases in a day from for nearly three months, Germany has now crossed that threshold four times in the last week.

Germany’s R rate has been above the 1.0 threshold for most of the last month, although it fell to 0.97 in the latest update on Tuesday.

Health officials say the ongoing rise is ‘very concerning’ and have linked it to travellers returning from summer holidays elsewhere in Europe.

Germany yesterday extended its travel warning for Spain to cover Madrid and the Basque country, having previously curtailed travel to Catalonia and nearby areas.

While cases have been rising in Germany for several weeks, the daily death toll has mostly remained in single figures.

Six new deaths in the last 24 hours brought the death toll from 9,201 to 9,207 today, still substantially lower than in Britain, Spain, France or Italy.

Health minister Jens Spahn told German radio today that there were smaller and larger outbreaks happening in most of the country, in contrast to previous spikes which were confined to particular neighbourhoods or factories.

Only 46 districts have not recorded a case in the last week, down from 120 a month ago when cases were at their lowest.

‘This obviously – if we don’t all watch out now – can lead to a certain dynamic’ and the reemergence of the pandemic,’ Spahn said.

He said: ‘When there’s alcohol involved, when a festive event turns into a party, it can go very, very quickly.’

‘A further worsening of the situation must be avoided. This will only succeed if the entire population continues to be committed to decreasing transmission,’ it says. 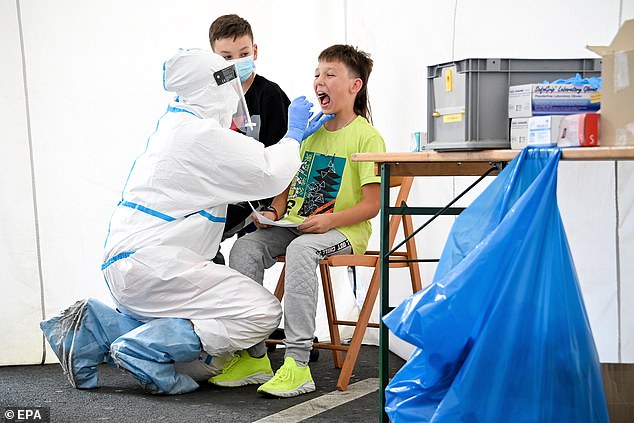 The rising numbers in Germany come amid fears of a second wave across Europe, with France and Spain also seeing alarming increases in infections.

France’s seven-day average is now at 1,691 new cases per day, the highest level since April and up from just over 500 in mid-July.

Prime minister Jean Castex warned that the public was becoming careless and said that the ‘rebound in the epidemic’ could become ‘hard to control’.

The increase has led to fears that France will be the next country to be struck off Britain’s list of approved countries for travel.

Spain has already been cut off and cases have continued to mount since then, with the seven-day average now at 3,357 cases per day compared to 480 a month ago.

Spahn said he was ‘very sceptical’ about Putin’s announcement, saying the jab had not been ‘sufficiently tested’.

Russia has made the vaccine race a matter of national prestige and has named the product ‘Sputnik V’ after the former Soviet space satellites.

‘It’s not about being first somehow – it’s about having an effective, tested and therefore safe vaccine,’ Spahn told Deutschlandfunk radio.

‘I would be pleased if we had an initial, good vaccine but based on everything we know – and that’s the fundamental problem, namely that the Russians aren’t telling us much – this has not been sufficiently tested.’ 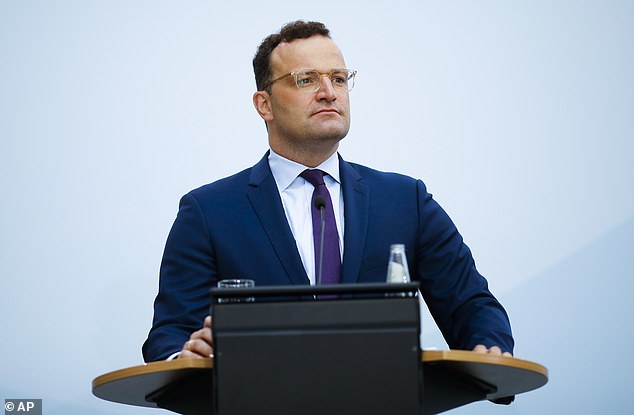 Spahn added: ‘In order to have trust in such a vaccine, I think it is very, very important, even during a pandemic, to properly do studies, the relevant tests and especially to make them public.

‘The problem is that we know very little about it as the Russian authorities are not being very transparent.’

Government officials have said it will be administered to medical personnel, and then to teachers, on a voluntary basis in the coming weeks.

Mass roll-out in Russia is being lined up for October and officials claim that 20 countries have already ordered a billion doses of the vaccine.

While experts have not dismissed the possibility that ‘Sputnik V’ is effective, scientists say there is ‘little detail’ on the vaccine and warn that it is ‘not possible to know’ whether it works without proper data.

Prof Francois Balloux, a biologist at University College London, slammed Putin’s move as ‘reckless and foolish’ and said that ‘vaccination with an improperly tested vaccine is unethical’.

‘Any problem with the Russian vaccination campaign would be disastrous both through its negative effects on health, but also because it would further set back the acceptance of vaccines in the population,’ he warned.