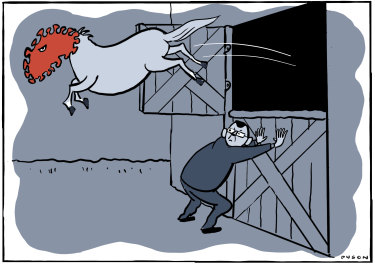 To submit a letter to The Age, email [email protected] Please include your home address and telephone number.

Government needs to use a dose of common sense

My husband flew to Sydney and back on Thursday. He had the required permits for travelling each way. On arrival in Sydney, he was required to join a queue and present his permit to authorities before he was allowed to exit the airport.

On arrival in Melbourne, a number of “authority” figures (uniforms, lanyards) simply waved passengers through the airport. One yelled out to a passenger “Got a permit, mate?“, who replied “yes”. Then, with much arm waving and “you’re right”, everyone was hurried along. Not a single permit was checked. Can Dan Andrews and his government please go back to basics of common sense and steer Victoria (in particular, Melbourne) out of the mess which is continually being thrown in our faces.
Felicity Browne, Kooyong

Excuse me, Premier, but what is your plan?

As a life-long Labor person, it pains me to say that the state government does not seems to have a COVID-19 strategy. Rather, the only tactic to be deployed is a snap lockdown whenever a breakout occurs. This is not sustainable.
James Young, Mount Eliza

Our only option is to isolate quarantine staff

We should require hotel quarantine workers to also self-isolate during their employment and compensate them accordingly – ideally with both them and returned travellers in an isolated, regional facility rather than hotels in our biggest cities.

Many Australians are more than happy to be fly in-fly out workers to remote mines or oil rigs for weeks or months at a time in exchange for a six-figure pay cheque. There would be no shortage of workers willing to do the same for managed quarantine, thus providing them with a windfall and the rest of the country with an extra layer of protection. Or we could just keep doing a rollercoaster of lockdowns for another year.
Mitchell Edgeworth, St Kilda

Why are rural areas being unfairly punished?

Thankfully, other states are now recognising the difference between greater Melbourne and regional Victoria. Unfortunately, Daniel Andrews does not. Out here in the Wimmera, we have been COVID-free for a year yet we have to endure lockdowns, restrictions and masks – all because international travellers are allowed into the country and quarantine is being mismanaged.
Peter Knight, St Arnaud

The importance of nurses in quarantine hotels

Nebulisers may have been banned for use outside of negative pressure rooms in Victorian hospitals (The Age, 12/2) but the reality is that many people use them at home for asthma, emphysema and other lung disorders. Why aren’t nurses being used in hotel quarantine? They would have picked up the extreme risk of a nebuliser in a COVID environment immediately.
Mary Keating, Flemington

Welcome, come in, no checks are needed

I have just returned from Newcastle in New South Wales. Upon our arrival at Newcastle airport, we were met by a number of personnel directing us into an area for screening. The staff were most efficient, we had to sanitise our hands, our temperatures were checked and we were asked the usual questions about our health. We handed over our permit to enter NSW. All good and off we went.
Upon our arrival back in Melbourne, we did not need to sanitise our hands or have a medical check, nor were we asked to show our permit to enter Victoria. Does our state need to follow NSW’s excellent standard?
Helen Clapham, Wonga Park

Travellers flying in: What could go wrong?

Just keep those infections flying in. Obviously, there is nothing more important than air travel. And keep building bigger airports. I mean business as usual must be just around the corner.
Peter Berenyi, Howes Creek

Why have our federal authorities not been able to obtain an early, small delivery of the Pfizer vaccine when the application to sell it in Australia was being evaluated by the Therapeutic Goods Administration?

It only had to be a few thousand doses that could have been administered, immediately after approval was given, to border and quarantine staff who had contact with returning travellers. It would have been worthwhile even if a large premium had been paid. Given that nearly all the risk of an outbreak lies with returning travellers, this was an opportunity missed. We are paying for it now.
Michael Wade, Wantirna

To allow the Australian Open to go ahead while locking down millions of Victorians clearly demonstrates that the first priorities of the Andrews government do not lie with the people of this state.
Christine Graunas, Highton

Lockdown again. But why will Daniel Andrews let the Australian Open go ahead but not our Mornington Peninsula Bowls division 5 match? Does that mean we are a more dangerous group of people than the prima donna tennis players? Or simply that the Premier makes heaps of money out of the tennis but nothing from us?
Ken Wall, Mount Martha

A poet for Australia

Duncan Fine asks “Where is Australia’s Amanda Gorman?” (Opinion, 12/2). Try reading Ellen van Neerven, a young, non-binary Aboriginal poet. Try their collection Throat or poems like Vinegar or the one called Chips. Your world will change. And in our podcast, Between the Leaves, produced by the Victorian Women’s Trust, you can hear this extraordinary poet read them.
Hermina Burns, Rosanna

Duncan Fine’s reference to white, mainly male poets of a bygone era seems out of touch with poetry in Australia today. We can respect the poets of the past, but we have more powerful, modern day poets from First Nations to more recent migrants, female and male. We are not brought up in Australian education to embrace poetry as a beautiful and powerful tool for expressing words.

Perhaps Fine and others could start with the poems of the late Oodgeroo Noonuccal (Kath Walker), including Aboriginal Charter of Rights. Although it may never have been read as flamboyantly and strongly as Amanda Gorman read hers, it could bring an audience to a hushed silence. Guwayu-For All Times: A Collection of First Nations Poems is another excellent volume, as is Kindred by Kirli Saunders.

Let us embrace poetry (of any form and style) and teach our children to love how words can be placed so enticingly in this written form. There are Amanda Gormans in Australia, but until we give them a platform for their words of wisdom and beauty, they will remain silently in the background.
Linda Hibbs, Ringwood East

Shell has reported that “total oil production peaked in 2019” and is now likely to gradually decline (The Age, 12/2). BHP intends to reduce oil production by 40per cent by 2030. One of Australia’s last oil refinery plants is closing (The Age, 11/2).

Major automakers worldwide are investing in the electric vehicle future. Yet this major transition is barely acknowledged by our governments. Bold policies that support EV infrastructure and uptake are becoming urgent if we are to fully grasp these economic opportunities. Not to mention cleaner air for our children and reduced emissions.
Judy Schrever, Sandy Point

An end to toxic dumps

It is early days, but may I be so bold as to suggest a community facility, or some public space, on the retired refinery site in Altona. The easy thing to do would be to convert the site for some other toxic industry to move in. Instead let us take the opportunity to improve the liveability of Altona, not condemn us to being the permanent toxic dumping ground of the west.
Kristen Doell, Altona

Energy Minister Angus Taylor says Australia is “dead against” climate tariffs being proposed by Britain and the European Union (The Age, 12/2). They are simply a mechanism to offset the effects of “dumping” by nations that fail to include all costs in determining their sell prices.

Many of us remember the “dirty industries” that once lined our rivers. The attraction was the use of those waterways for free waste disposal. Thankfully those practices were ended and industry was forced to bear the costs of resultant environmental safeguards. The same rules must now apply to industries that are freely emitting greenhouse gases to the detriment of our future.
Barry Jones, Wonga Park

We are the greatest

David Hickey (Letters, 11/2) suggests that use of the word “we” instead of “I” makes one sound less egocentric. “We are going to make America great again”. “We are going to build a wall”. “We won the election”. I think I see what he means.
Ian Kerr, Camberwell

The right to a fair trial

The notion that the outcome of Donald Trump’s second impeachment trial has already been determined by party membership rather than examining the evidence and listening to the prosecution and defence arguments makes a mockery of the rule of law. And suggests that the American form of democracy is not free, but governed by fear. I cannot help but wonder about the legal opinion of that firm believer in the American constitution, Supreme Court associate justice Amy Coney Barrett.
Anne Rutland, Brunswick West

The state opposition may describe Labor’s Victorian Commission for Gambling and Liquor Regulation as a “lap dog” for Crown Casino (The Age, 11/2), but it was under the Coalition’s leadership that Crown was spared future loss of income. Should any government have the temerity to actually regulate by introducing gambling limits, pre-loaded cards etc, there is always the gambling lobby to wage war for this insidious “job creating” industry.
Peter Angelovski, Hoppers Crossing

Close the casino down

We understand that the ruling that Crown is not a suitable applicant to run the Sydney casino was based, in large measure, on the money laundering and other failings at the casino in Melbourne. Why then is Crown still allowed to operate here?
Marion and Noel Lodge, Lilydale

I really feel for the sensitive people whose safety is threatened by a talk from a feminist they disagree with. Readings regrets it invited Julie Bindel to speak at one of its stores in 2018 (The Age, 11/2). Obviously we feminists are a threatening lot and we come armed with words, not guns, so the poor, wee woke folk have to be protected from our ideas by cancelling us.
Sue Leigh, Moonee Ponds

Why is it OK for a public official to be persecuted by large yellow and black ads in The Age? The regular attacks on James Shipton and ASIC by Clive Palmer create an atmosphere of fear and intimidation against public servants doing their jobs, when those jobs apparently threaten people like Palmer. Why is The Age party to bullying? Palmer is looking after his money, The Age is looking after its revenue. Readers have to put up with this distasteful display.
Laurie Bebbington, South Yarra 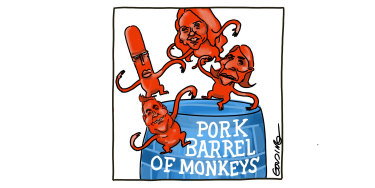 I see that Dutton has been caught “doing a Bridget”.
Edward Lithgow, Maryborough

A whiff of an election and the Liberals revert to their modus operandi. Enabling greed while ignoring need.
Pete Sands, Monbulk

When will Andrews show leadership and close Victoria to overseas arrivals? They’ve had a year to return.
Nick Shea, Richmond

Melburnians don’t deserve to be locked down again due to the lack of care in hotel quarantine.
Brooke Martin, McCrae

Dan and Tennis ($$) Australia, look what you’ve done. Thousands of us told you so.
Doug Perry, Mount Martha

It’s good to see, from television shots, that Tennis Australia is managing social distancing so well (not).
|Damian Meade, Leopold

Board members of publicly-listed companies have a greater responsibility to the community than to their shareholders.
Greg Malcher, Hepburn Springs

It’s the casino Catch 22: anyone who wants to own or run one definitely isn’t a fit and proper person.
Shane Bonetti, Heathmont

The Age’s editor, Gay Alcorn, writes an exclusive newsletter for subscribers on the week’s most important stories and issues. Sign up here to receive it every Friday.