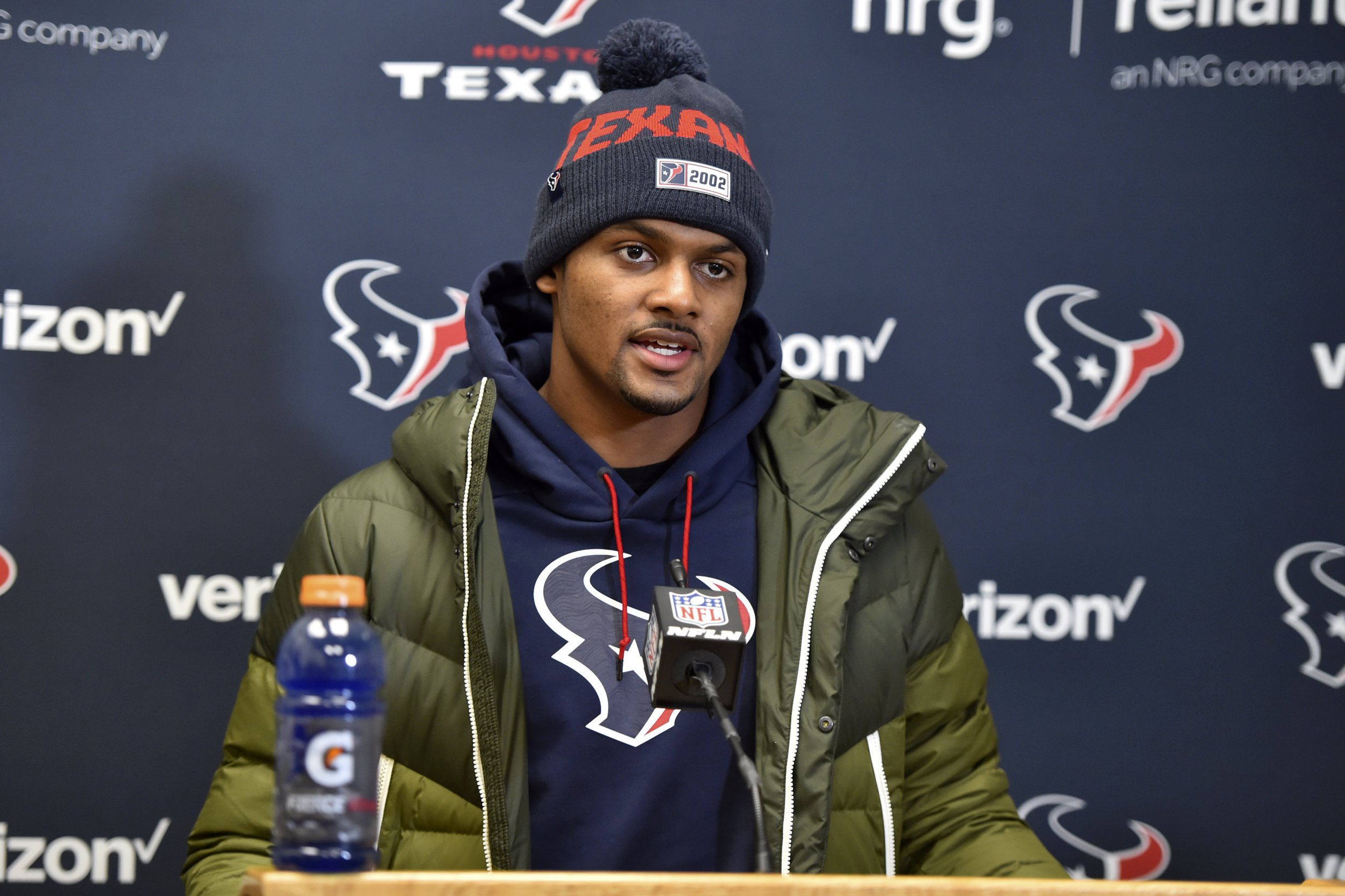 Attorney Tony Buzbee revealed on Friday that he has been hired by a total of nine women to bring misconduct and sexual assault suits against Watson and is currently speaking with "several others".

One of the accusers claims Watson forced her to perform oral sex on him during an encounter in December 2020. At least two others say he exposed himself to them during massage sessions.

Calling each of the women's allegations "similar", Buzbee has so far filed seven suits against Watson and "will file the remaining ones in due course," TMZ reported.

Buzbee also praised his clients, calling them "brave women who are willing to come forward and be heard."

After the first of the allegations emerged earlier this week, Watson shared a statement to Twitter, denying the claims and insisting he has "never treated any woman with anything other than the utmost respect."

"As a result of a social media post by a publicity-seeking plaintiff's lawyer, I recently became aware of a lawsuit that has apparently been filed against me," Watson wrote on March 16.

"I have not yet seen the complaint, but I know this: I have never treated any woman with anything other than the utmost respect."

He continued: "The plaintiff's lawyer claims that this isn't about money, but before filing the suit he made a baseless six-figure settlement demand, which I quickly rejected.

"Unlike him, this isn't about money for me – it's about clearing my name and I look forward to doing that." 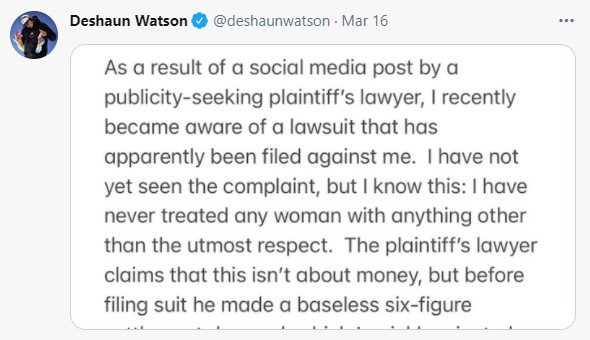 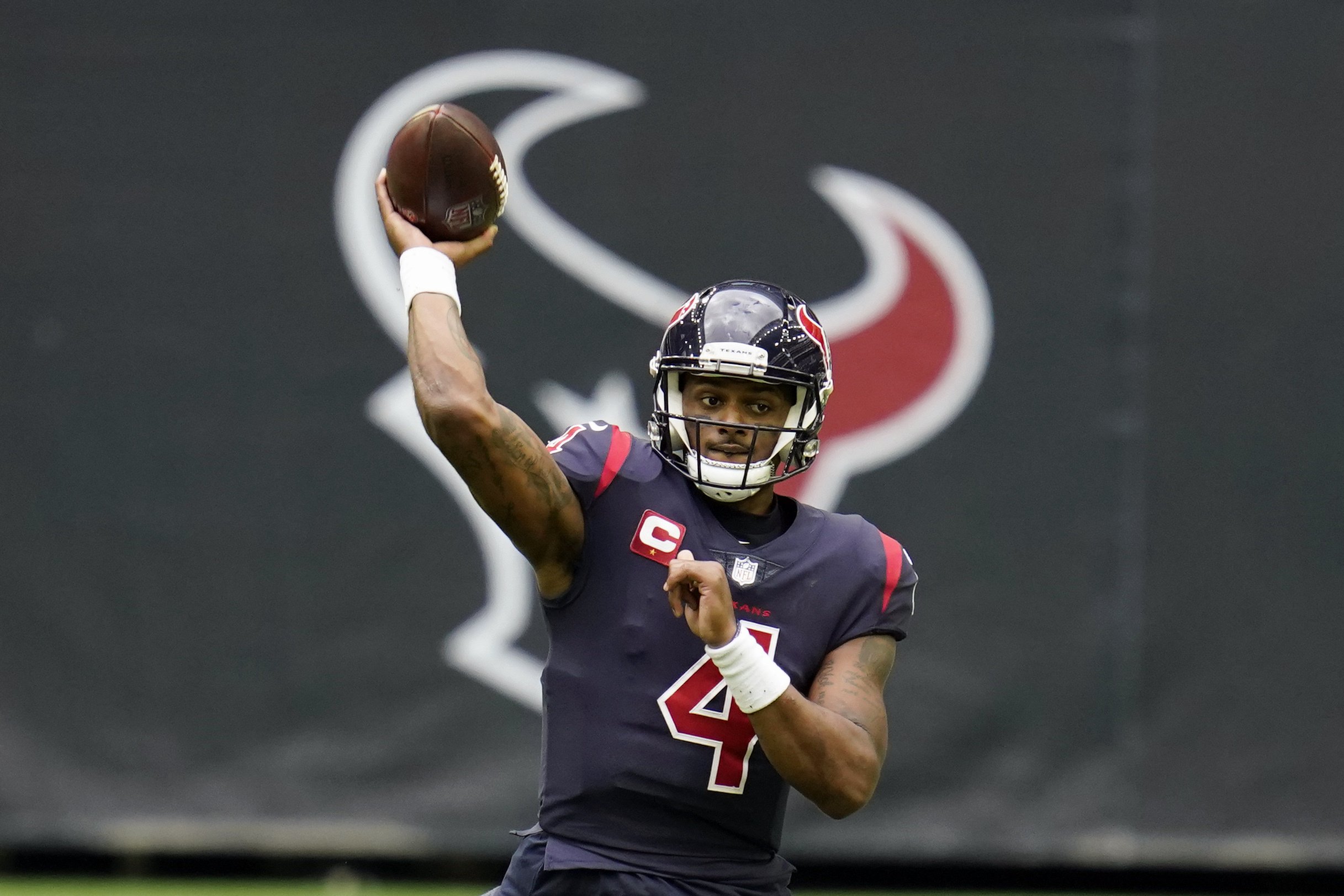 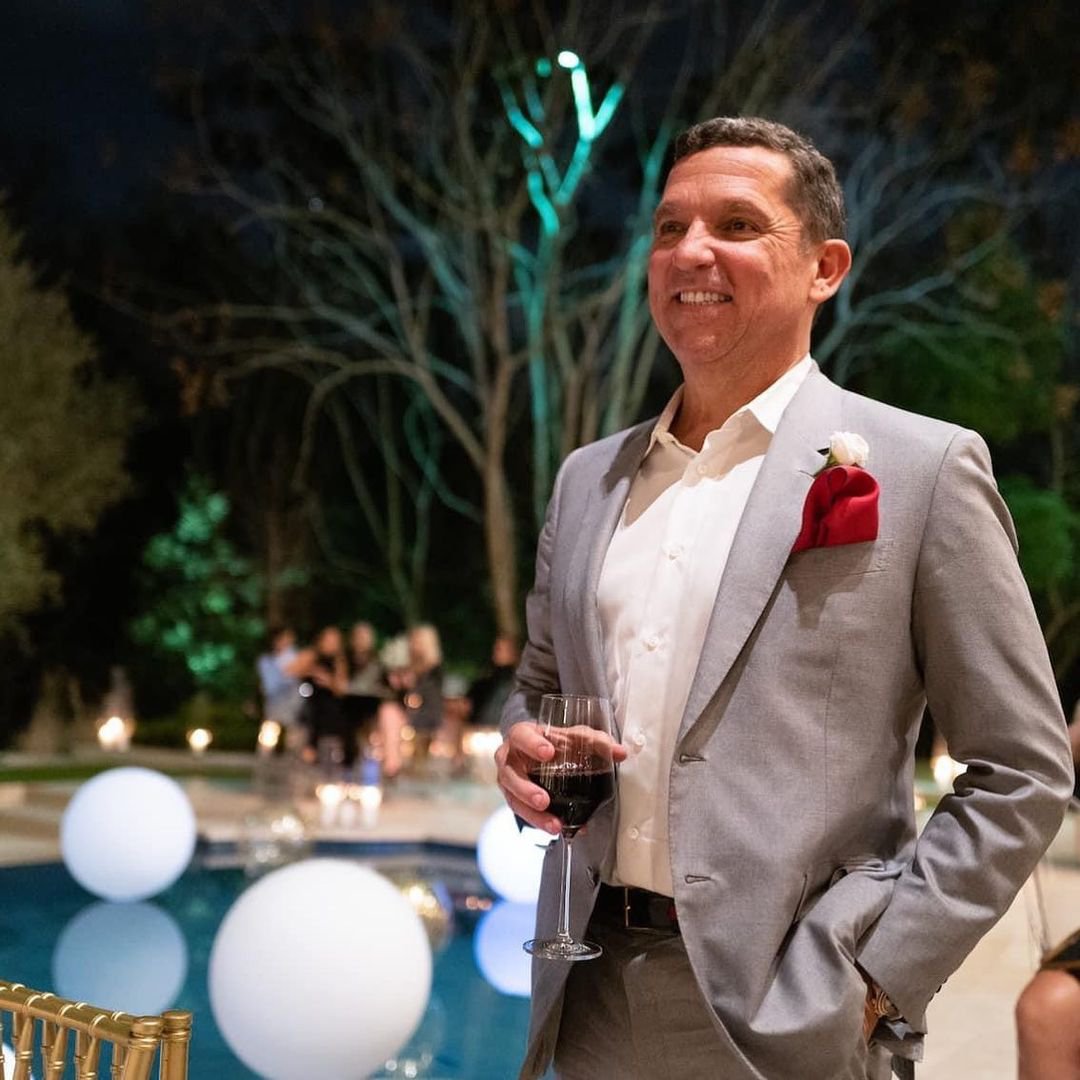 Buzbee is set to address the media in Houston on Friday afternoon, where he says he will provide more information about the seven lawsuits, in addition to providing multiple text exchanges and messages relative to the claims.

He posted two alleged screenshots of conversations to Instagram on Thursday evening.

In the exchange, an account appearing to belong to Watson writes: "I'm more of a Swedish [massage] guy. Are you working tomorrow … Are you comfortable with the glute area."

In a second screenshot, a text pertained to have been sent by Watson to one of his accusers reads: "Sorry about you feeling uncomfortable. Never were the intentions. [Let me know] if you want to work in the future. My apologies." 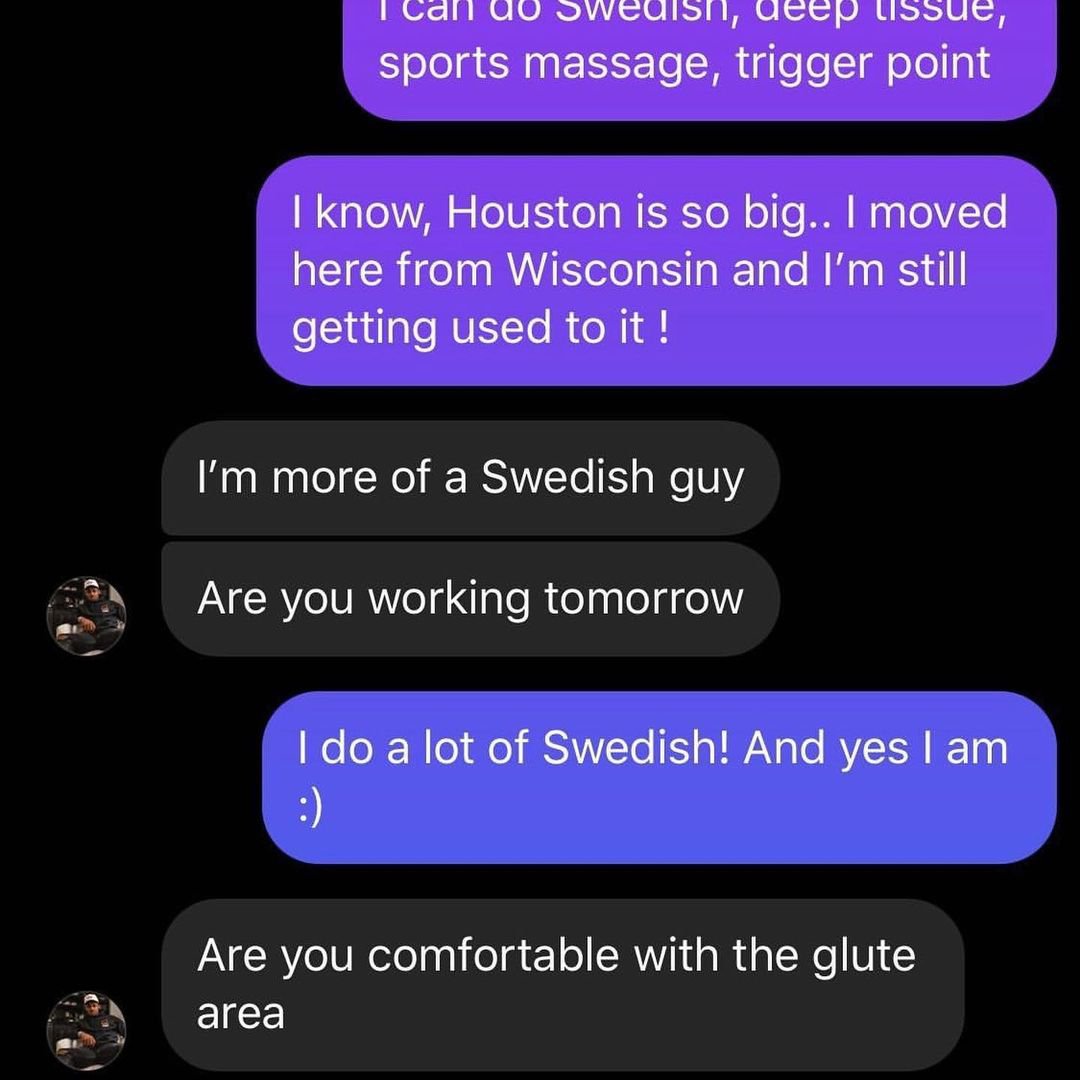 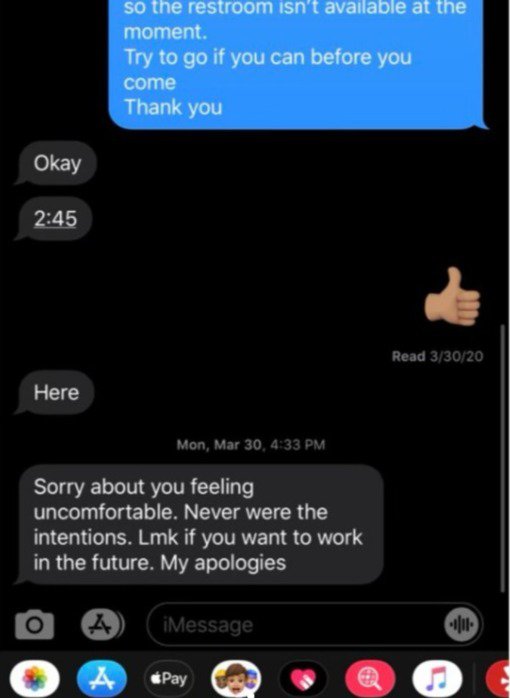 NFL spokesman Brian McCarthy told ESPN on Thursday said "the matter is under review" of the league's personal conduct policy.

The Texans said they would stay in close contact with the NFL during the league's investigation.

All seven of the cases so far paint a pattern of sexual assault against a massage therapist.

Six of the suits detail alleged one-time encounters with Watson, while one woman claims she was sexually assaulted by the quarterback multiple times.

In that lawsuit, the accuser claims she was booked as a masseuse for Watson through a spa where the licensed esthetician worked.

The other six claim Watson first inquired about their massage services through direct messages on Instagram.

One of the allegations stems from a December 28 incident, when the therapist claims to have given Watson a massage in a Houston office building.

The newly-engaged masseuse, who had just graduated from chiropractic school, claims Watson told her to focus massaging his "inner thighs" and "inner glutes".

She claims he "got more aggressive" and repeatedly told her to "move her hands down to his pubic area", the suit outlines.

"Plaintiff felt intimidated and threatened. She was afraid of what someone like Watson could do if she did not submit to his demands," the suit says. 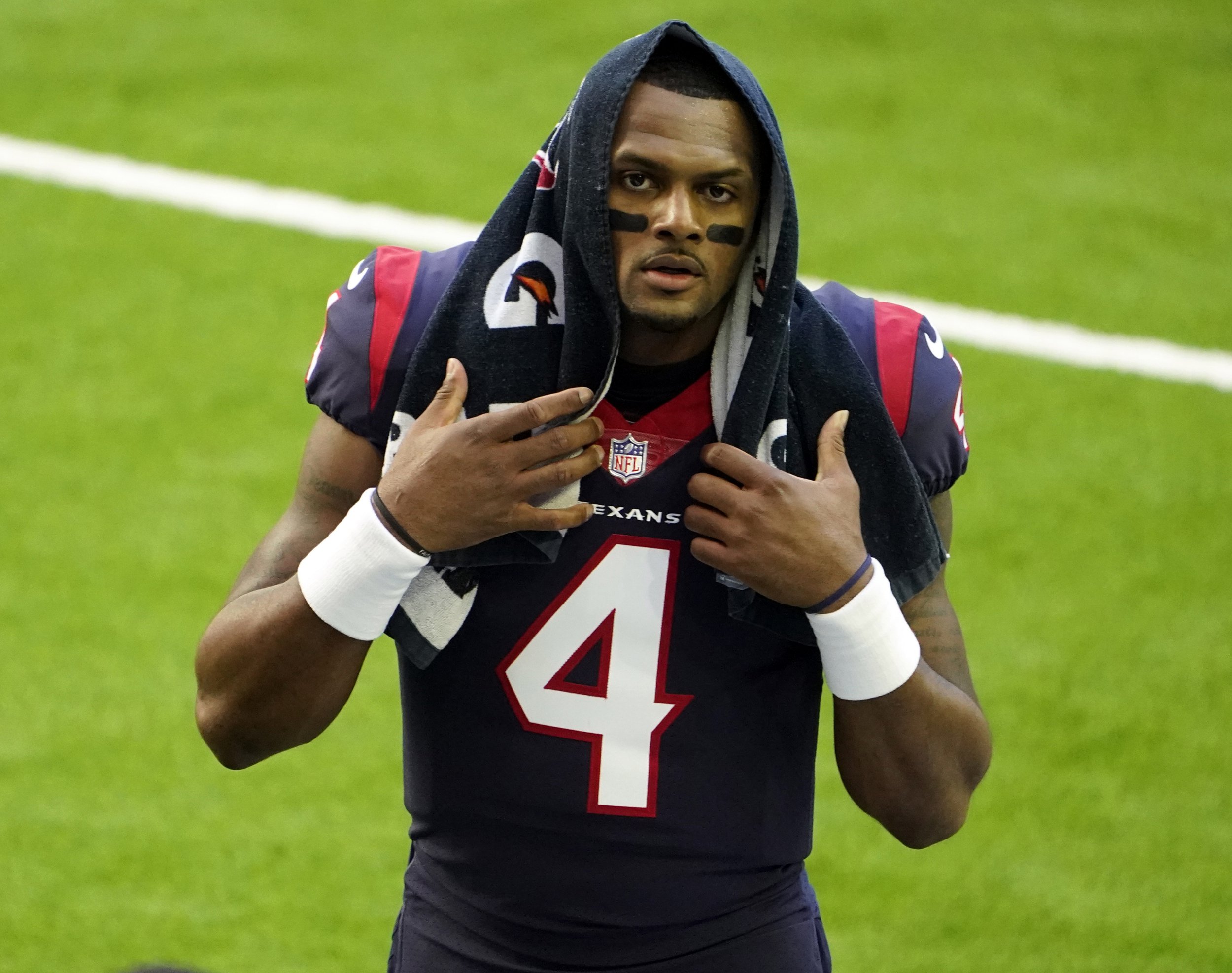 Buzbee added that the young woman "wishes she could have been more courageous and would have ended the massage. But she felt helpless in the moment" and "was under Watson's control."

Two of the other accusers claim Watson exposed himself in massage sessions, also in Houston, on March 30 and August 28 of last year.

In the August incident, Watson is said to have "flipped over on his back, with his penis completely exposed."

That accuser, who says Watson flew her out from Atlanta to Texas, claims the football star refused to cover himself with a towel, prompting her to prematurely end the massage and call an Uber to take her to the airport.

The March 30 session, meanwhile, is said to have taken place at the plaintiff's home.

The woman claims she broke down in tears when Watson "exposed himself" and touched her hand "with the tip of his erect penis."

As she was crying, the woman claims Watson told her: "I know you have a career and a reputation and I know you would hate for someone to mess with yours just like I don't want anyone messing with mine."

In two of the suits, Buzbee wrote that "Watson's behavior is part of a disturbing pattern of preying on vulnerable women."

Watson has not yet responded the latest civil suits filed against him.

In a statement issued the same day, the Houston Texans said they were aware of the matter and wanted to known more about the allegations.

"The NFL informed us [Thursday] that they will conduct an investigation into the allegations made in the civil lawsuits filed against Deshaun Watson.

"We will stay in close contact with the league as they do. We continue to take this and all matters involving anyone within the Houston Texans organization seriously. We do not anticipate making any additional statements until the NFL's investigation concludes."

Watson has played four seasons for the Texans. In September last year he signed a four-year contract extension valued at $156,000,000.