Make mine a small one! How one locked-down landlady has recreated her pub as a doll’s house… in pint-sized detail

After a winter of lockdown we’ve all been dreaming of the pub. But one landlady has taken her passion a step further by recreating hers as a pint-sized doll’s house.

Amy Sayers, 35, has spent more than 300 hours — up to eight hours a day — on the project to keep her busy after her pub, The Swan in Addingham, near Ilkley, West Yorkshire, was forced to shut due to Covid.

Her 1:12 scale ‘micro-pub’ used real materials from her boozer — including fabric from the underside of a bench and an off-cut of the real bar floor — is decorated using the same paint. 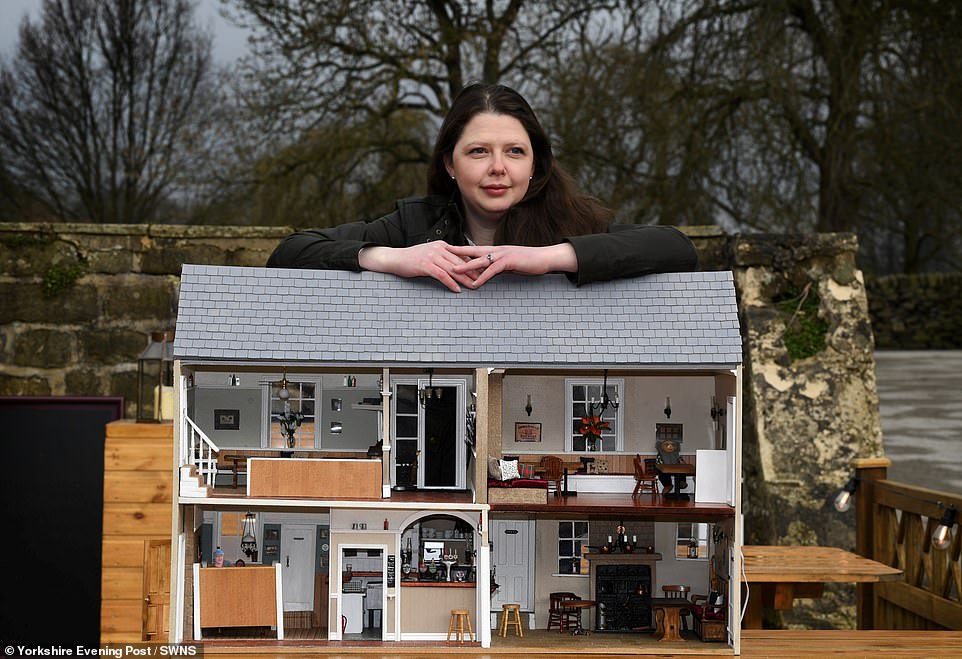 Amy Sayers, 35, has spent more than 300 hours recreating her shuttered pub in minute detail as a pint-sized doll’s house 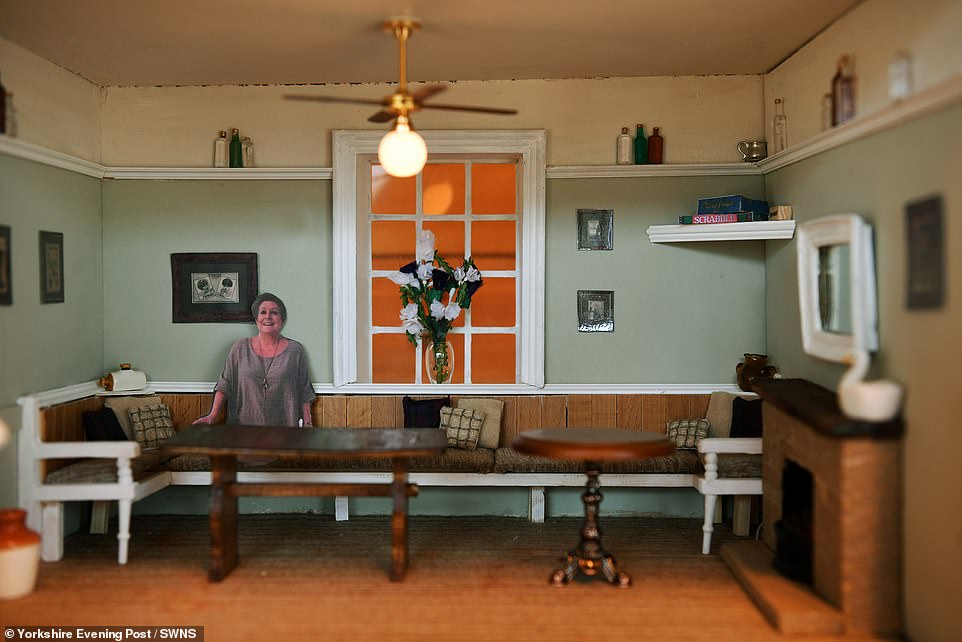 Her 1:12 scale ‘micro-pub’ used real materials from her boozer — including fabric from the underside of a bench and an off-cut of the real bar floor — is decorated using the same paint 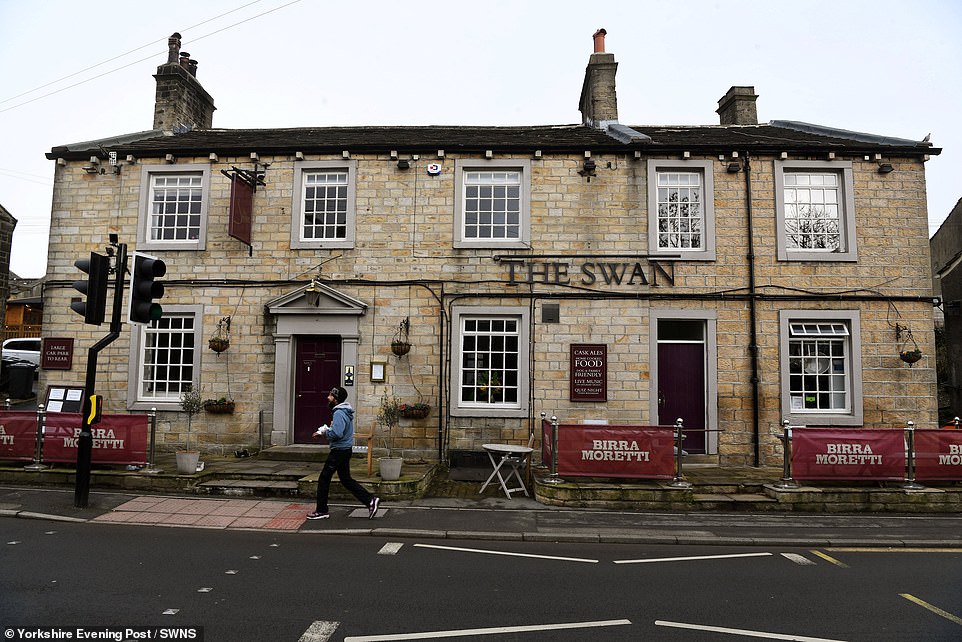 Amy’s pub, The Swan (pictured) in Addingham, near Ilkley, West Yorkshire, was forced to shut due to Covid. Once reopened, the pub will house the tiny model 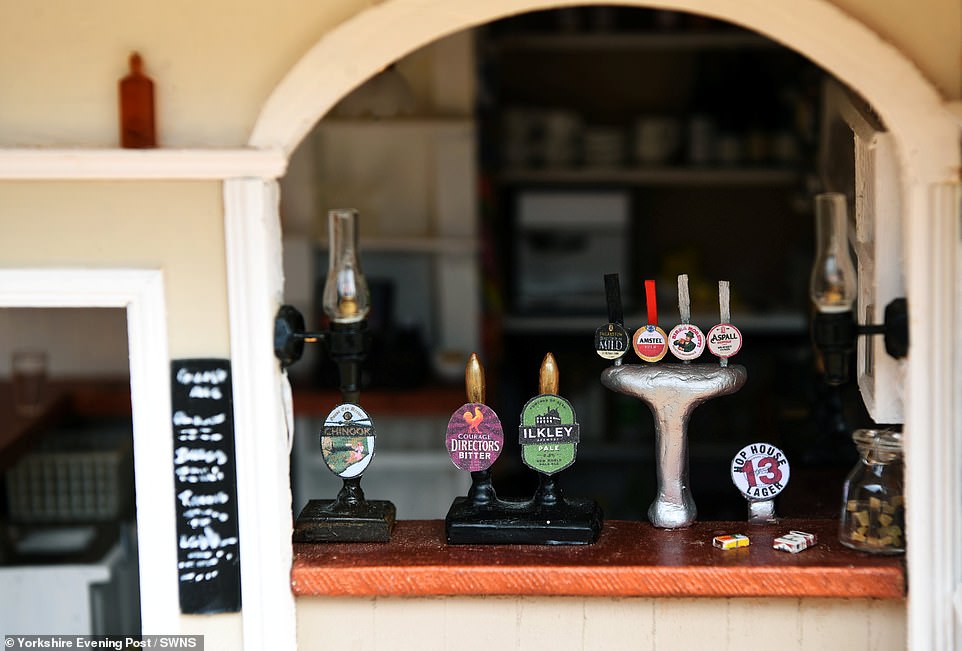 The tiny house features both doll and cardboard cut-out models of regulars, beer pumps made from matchsticks and even a tiny newspaper rack.

Amy, who has run the pub for five years, says: ‘I needed to keep my mind busy. The novelty of lockdown had worn off by this point.

‘About six to eight hours of my day have been taken working on it — in between home-schooling. 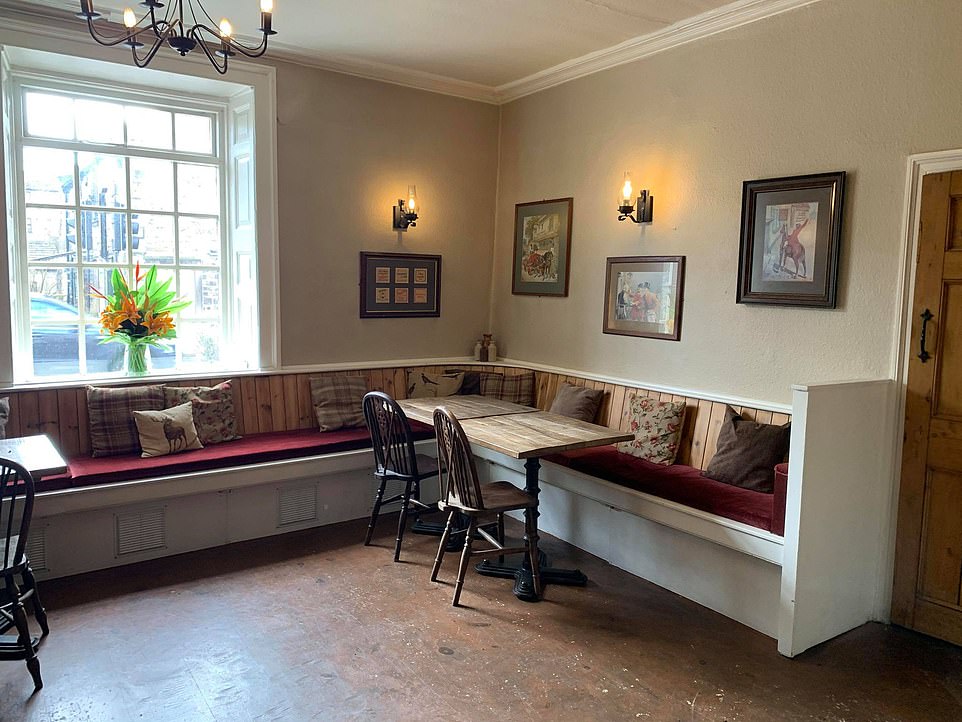 Amy considered everything from the colours of flowers in the window, to the cushions in the real pub (pictured) when making her model 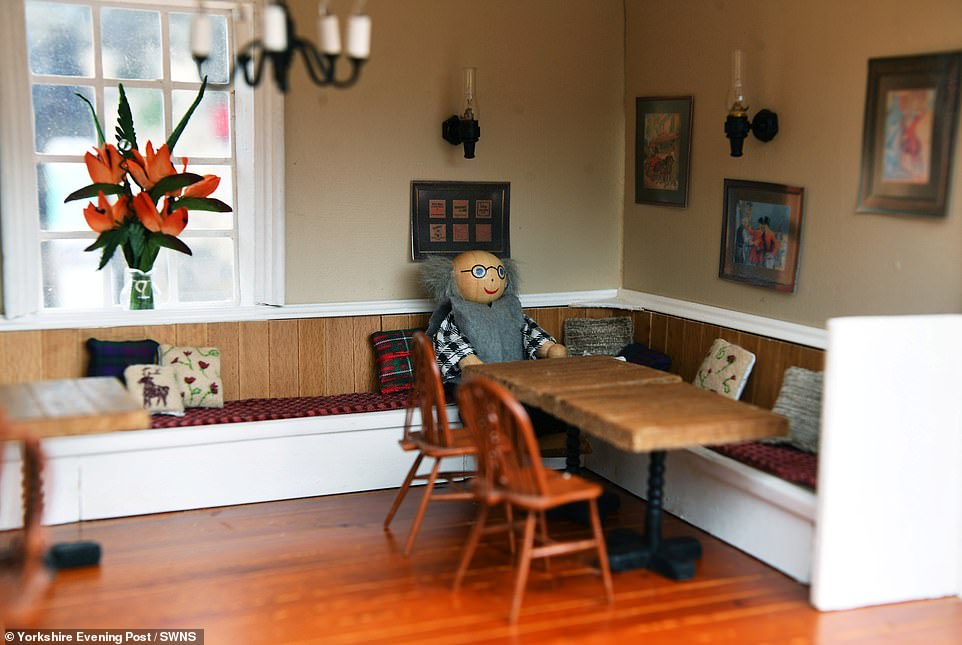 ‘It needs some more tables and guttering adding but it is pretty much finished. I am so happy with it.’

Amy tried to make everything from scratch but turned to independent retailers from online marketplace Etsy for some items, such as an intricate version of the pub’s cash till.

She adds: ‘The reaction has been amazing since I put it on social media.

‘I will put it inside the pub when we can have people back in again, so many have asked to see it . . . I have loved working on it.’ 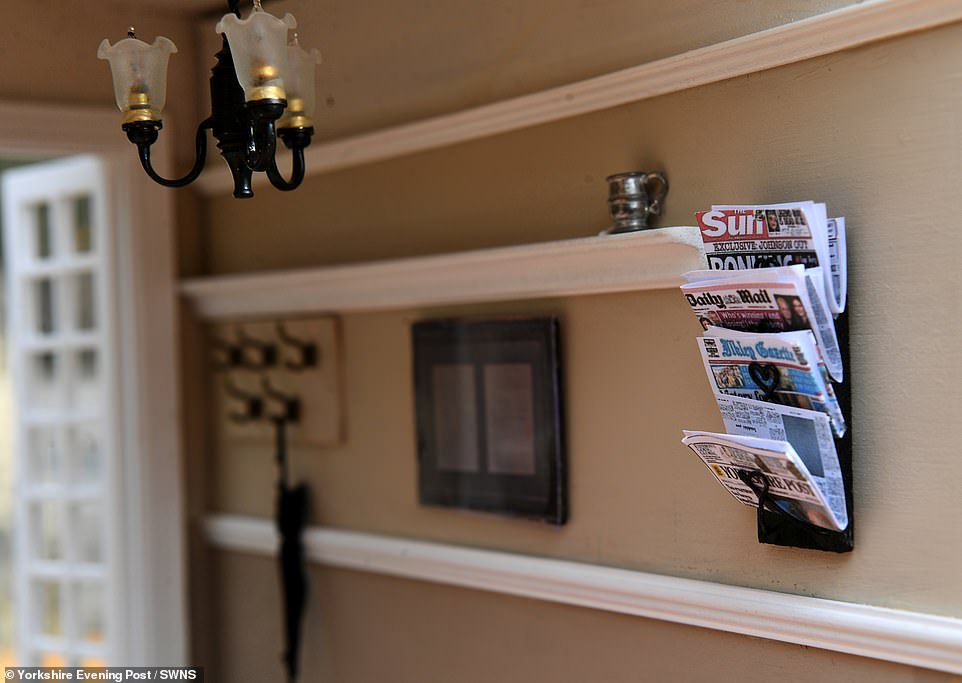 Amy captured even the small details of her pub, including the newspaper rack featuring local and national titles 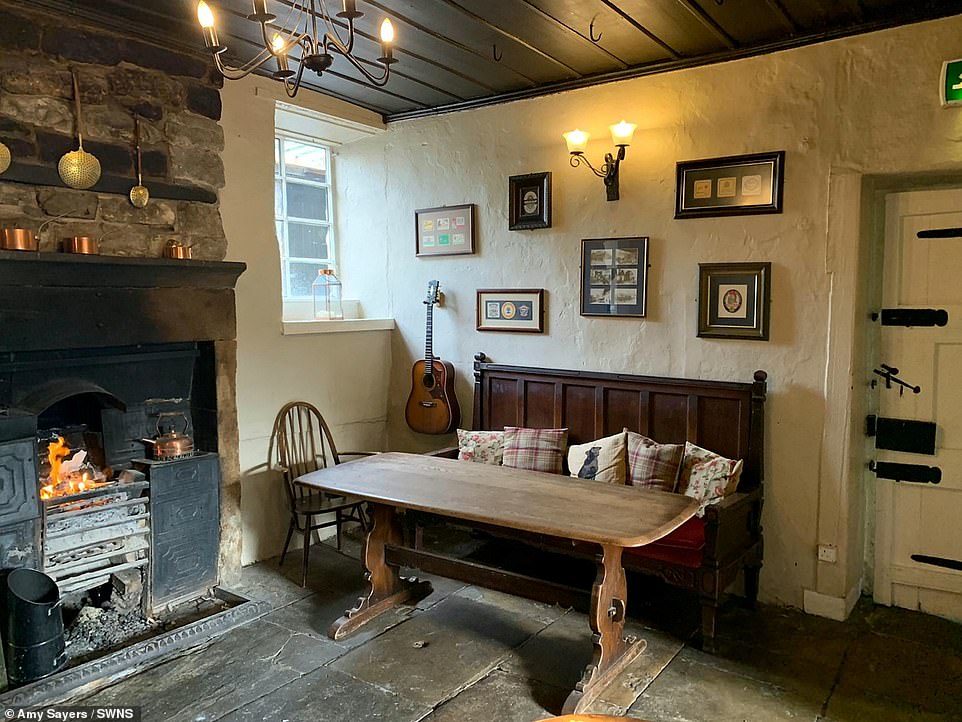 Amy recreated her real pub (pictured) in meticulous detail, including all the pictures and other wall hangings 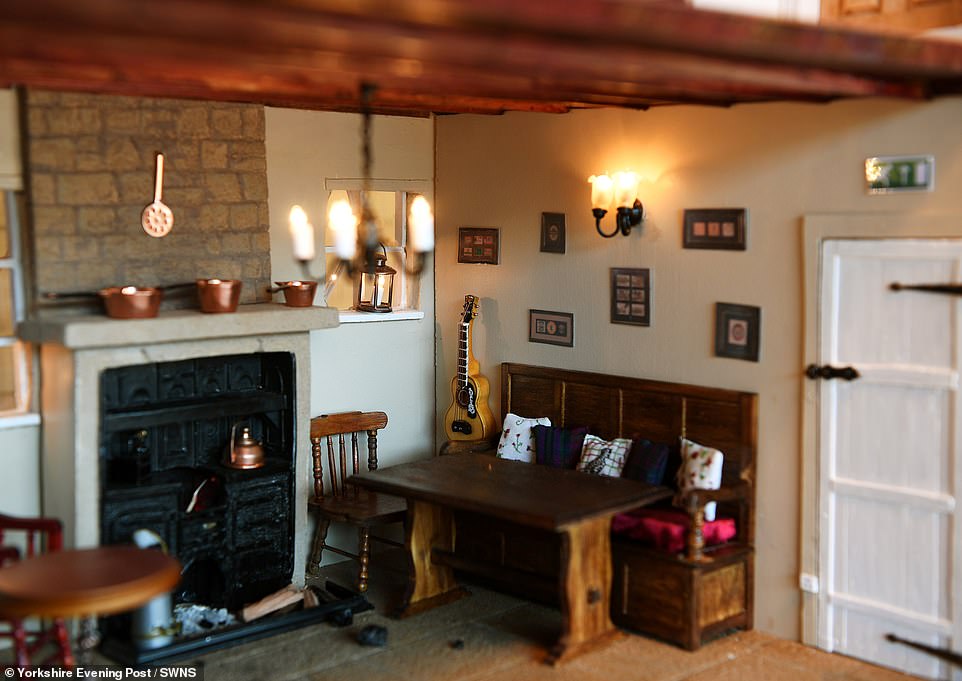