It was almost 20 years ago but Indigenous leader William Brim, then in his thirties, still has a very clear recollection of the Duke of Edinburgh asking the infamous spear question of his father.

It was on a visit in March 2002 to the Tjapukai Aboriginal Park when Prince Philip turned to Ivan Brim, in his sixties representing the Buluwai elders, and asked what was to become known as ‘the spears gaffe’ reported around the world. 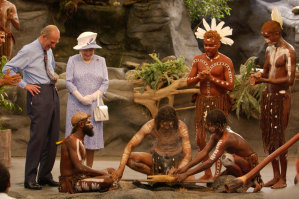 Ivan Brim died three years ago, and his son William, also a Buluwai elder from Kuranda north of Cairns, said he was saddened to learn of the death of Prince Philip on Friday night.

He said the incident happened at the park where people could experience Indigenous culture. The Queen and the Duke visited as part of their Royal tour.

“On the way in, they were greeted by our staff and also elders from the Buluwai, Yirraguy people and the Djabugay people. He [Prince Philip] noticed that there were different tribal groups there, so he asked my father if we still threw spears at our neighbours. 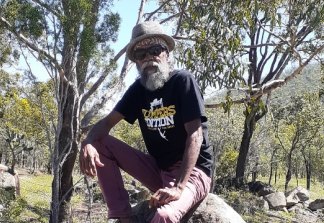 William Brim an Indigenous leader whose father Ivan Brim was asked by Prince Philip in 2002  ‘do you still throw spears’.Credit:Katreena Darcy

“Then that drove the media into a bit of frenzy, wanting to know what was going on, what was said and what made them laugh. My response was it was nothing, just two old fellas having a joke. When I got home the British media got on to me. That’s when I called the Duke a little naive for not really understanding our culture and what we have been through.

“Dad took it lightly but, my God, I just didn’t think he should have been saying things like that. I thought he should learn a little bit more about our culture.” 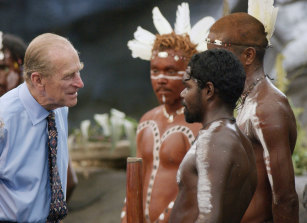 The Duke of Edinburgh talks to Aboriginal performers after watching a culture show at Tjapukai Aboriginal Culture Park, Cairns, 2002.Credit:Getty

The Duke of Edinburgh had already established a reputation for the occasional faux-pas. The Herald reported at the time that, over the years, he had offended a range of nationalities and ethnic groups.

In 1986, he described Beijing as ghastly and told British students in the city: “If you stay here much longer, you’ll all be slitty-eyed.” In 1995, he asked a Scottish driving instructor how he kept his students off the booze long enough to pass the test.

And in 1981, during a recession in Britain, he said: “Everybody was saying we must have more leisure. Now they are complaining they are unemployed.” He also reportedly asked a student who walked the Kokoda Track in Papua New Guinea: “You managed not to get eaten then?”