‘If rape is inevitable, lie down and enjoy it!’ Indian politician sparks outcry with sex attack comment during state assembly – as other lawmakers laugh

An Indian politician has sparked outrage after joking about rape in parliament.

Ramesh Kumar, former parliamentary speaker-turned congressional leader from southern Karnataka state, made the remark during a debate on Thursday.

He made the jibe as current speaker Vishweshwar Kageri struggled to control a debate on farmer’s rights, saying he was temped to sit back and let the row rage.

‘There is a saying: When rape is inevitable, lie down and enjoy it,’ Mr Kumar replied to laugher from Mr Kageri and elsewhere in the house. 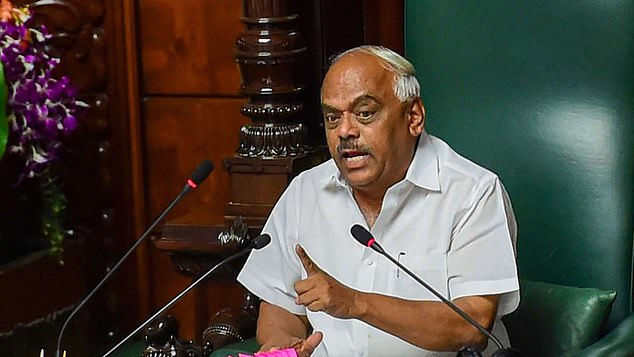 Ramesh Kumar sparked outrage when he joked during a parliamentary debate in India that: ‘When rape is inevitable, lie back and enjoy it’ (file image)

But the remark also sparked outrage among female members of the house, who accused Mr Kumar of belittling an issue that continues to plague India.

Poornima Srinivas, of the ruling BJP, shot back: ‘When we came to the assembly, we looked up to Ramesh Kumar for his parliamentary acumen.

‘But it looks like he has no respect for women.’

Roopakala M, another lawmaker, added: ‘A woman who faces sexual assault suffers trauma all her life. It is wrong to use this as an analogy for something else.’

Mr Kumar has since apologised for the remark on Twitter, describing it as ‘indifferent and negligent’.

‘My intention was not trivialise or make light of the heinous crime, but [to make] an off the cuff remark! I will choose my words carefully henceforth,’ he said.

But he declined to make an on-camera apology while attending parliament on Friday and has refused to address the issue since.

Mr Kageri, who also faced ire for laughing at the ‘joke’, refused to allow further debate on the issue during Friday’s session.

‘We all respect women and we strive to ensure that the respect for the woman is not diluted,’ he said.

‘I don’t think there is need to raise the issue and create a controversy.’

It is not the first time that Mr Kumar has got into trouble for making a joke in which he compared parliamentary process to rape.

In 2019, he made a similar jibe after fending off corruption allegations.

‘I got raped once. But like every rape victim, I am being made to feel like I was raped multiple times,’ he said.

India is known for having an endemic issue around sexual violence, particularly rape, which gained prominence after the horrific 2012 Delhi gang rape on board a bus during which a female student was killed.

Despite pledged by politicians and police chiefs to take offences more seriously, the conviction rate for reported rapes in India remains below 30 per cent and has done for at least the last decade.

India also has a particular problem with sexual violence against minors, with around a fifth of victims in any given year being under the age of 18.