Atlanta, Georgia: Natasha and Shailaja Singh are used to feeling outnumbered as Joe Biden fans in Suwanee, an Atlanta suburb where supporters of President Donald Trump are in the majority.

So when the mother and daughter heard that Biden was holding a drive-in rally in southern Atlanta on Wednesday (AEDT) just a week out from the election they hopped in their car and hit the freeway.

"We've already voted but we wanted to show our support in any way possible," Natasha said. "I wanted to get a sense that we could win this."

The Biden rally was invitation-only and the Singhs didn’t have a ticket. So they parked their car outside the fenced-off amphitheatre where Biden was scheduled to appear. The scene they encountered wasn’t exactly the Democratic jamboree they had imagined. 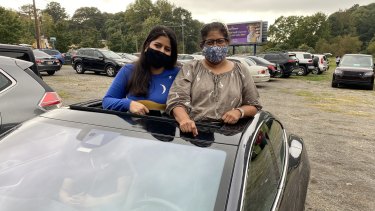 Biden supporters Natasha and Shailaja Singh at a Biden rally in AtlantaCredit:Matthew Knott

A large group of flag-waving Trump supporters had shown up as well, outnumbering the Biden supporters gathered outside the rally. The pro-Trump contingent was louder too: several of them were using megaphones to spread their message.

"If you don't like this country, you can leave," a Trump supporting man shouted into a loud-hailer. "We will never let socialism into this country. We are free."

Locals passing through the mostly-black neighbourhood were alarmed to see so many Trump supporters had shown up in their area. "This is ridiculous," a black woman shouted out. "The n—– should be out here reppin' their block."

It’s not surprising that more Biden supporters hadn’t come. The Biden campaign doesn’t promote campaign events like this to the general public; in fact, it can take some skilled online sleuthing to figure out exactly where they’re happening. Those invited to attend the drive-in Atlanta rally all had some connection to the local Democratic Party. Media access, like almost all of Biden's events, was restricted to a small number of campaign reporters.

The polls show Biden and Trump neck-and-neck in Georgia, a state that has only voted for a Democratic presidential candidate once in the past 40 years. Democrats hope that Biden's visit, on top of significant advertising spending, could turn the state blue.

Earlier in the day, Biden delivered a speech at Warm Springs, a town in Georgia where Franklin D. Roosevelt lived while he was president. Only a few dozen invited guests were in the crowd, all arranged according to strict social distancing protocols. When Biden strode out to appear, it was to a polite smattering of applause.

It’s a dramatic contrast to the Trump campaign, which is holding boisterous in-person rallies in battleground states across the country. Mask-wearing is not required and the crowds are packed in tightly together. At his rallies, Trump regularly mocks Biden for the much smaller crowds at his events and the comparative lack of enthusiasm on display.

"A Trump rally is an all-day excursion," Trump supporter John Ricketson said while standing outside the Biden event. "Biden's people don't have the same fervour." 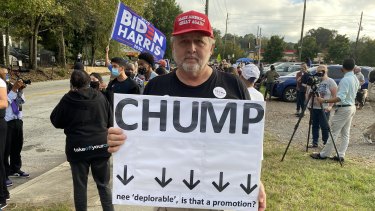 "I think Joe Biden is showing us the way things should be done," Natasha Singh said. "Trump is setting the wrong example."

Standing outside the rally with a Biden sign, supporter Leslie Wolfe agrees. She says that most Americans have become used to a lack of big gatherings in the age of COVID-19. Many high schools, for example, have held drive-in graduation ceremonies this year.

"Biden has his constituents’ best interests at heart," Wolfe said. "To pretend that life is normal and everything is fine is to have your head in the sand."

More concerning for Democrats has been Biden's noticeably light campaign schedule. While Trump has been holding up to three rallies a day to energise his supporters, Biden has had several recent days without any public events at all. He's only been to the battleground state of Arizona once this year. If Biden loses the election, his lack of campaign activity will undoubtedly be cited as a reason for his defeat.

On Tuesday (AEST) Biden held a quick last-minute press conference in Chester, Pennsylvania, a short drive from his home in Delaware. The event is widely believed to have been scheduled to avoid an unfortunate contrast with Trump, who was holding three rallies in Pennsylvania that day.

The benefit of holding campaign events – even with restricted crowd sizes – is the free media coverage they generate. A Biden visit to a city like Atlanta will almost certainly score him front page treatment on the local newspaper and prominent coverage on the local television news. Cable television networks will also usually broadcast his speeches in their entirety.

The Biden campaign knows it needs to up the tempo. Biden is scheduled to travel to Michigan, Wisconsin and Iowa later this week and he has said he will visit to the pivotal states of Florida and Pennsylvania again before election day. But the campaign is holding firm against large, Trump-style campaign rallies.

"I don't like the idea of all this distance but it's necessary," Biden said at a recent drive-in rally in Pennsylvania. "I appreciate you being safe. What we don't want to do is become superspreaders."

Our weekly newsletter delivers expert analysis of the race to the White House from our US correspondent Matthew Knott. Sign up for the Herald‘s newsletter here, The Age‘s here, Brisbane Times‘ here and WAtoday‘s here.