Some hadn’t been able to sleep, others had visible goosebumps and there was no mistaking the joy on their faces as thousands of footy fans returned to the MCG for the AFL season-opening clash between the Tigers and the Blues on Thursday evening.

For Tiger cheer squad member Paul Webb, the return to the ’G was so momentous that he couldn’t sleep the night before, his workday dragging ahead of the prospect of returning to an MCG teeming with life and ready for footy. 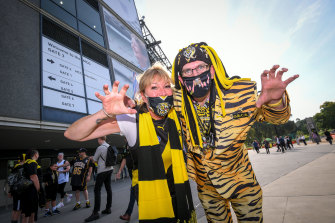 “I hope my boss doesn’t read this,” Paul said. “It’s beyond exciting, I couldn’t sleep at all last night. It means everything to be back here.

“To be back with the Tiger Army, they are like family.”

“It’s my favourite place in the world; I just got goosebumps just being here,” said friend Sue Eggens, sticking out her arm as proof.

Excitement on Thursday afternoon was palpable as MCG football was revived after 537 days of lying dormant due to coronavirus.

The event was sold out as fans rushed to watch the season-opening clash between the Tigers and Blues. 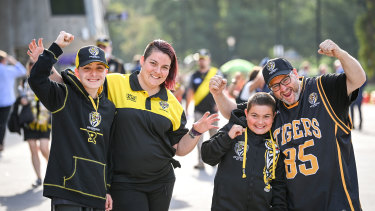 Shanon and Danielle Willett with their children Blake and Harley.Credit:Eddie Jim

For Shanon and Danielle Willett, being at the ’G to watch Dustin Martin with their children Blake and Harley means the world.

“It’s unreal mate. We can watch it on TV but it’s not the same,” Shanon said, struggling to find the words to capture his elation.

“To come and watch Dusty do his magic,” he says. He gestures at Harley: “this one, he usually has his hair cut like Dusty.”

For many, the MCG is Melbourne’s heart. People poured off trams, trains, roads and footpaths, feeding an expected 50,000 fans into the city’s great football stronghold. 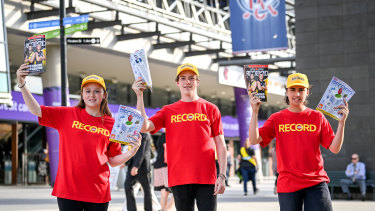 Sunbury’s Jake Hobden, who has sold the AFL Record magazine for almost four years, said he was relieved to return.

“It was upsetting last year with COVID going on, but I’m so glad to be back,” he said. “The MCG means everything to me. It’s the home of footy.”

The sounds have returned to the ground too. Record sellers spruik, Tiger fans rev each other up, a busker covers Adele, sirens ring out, two friends debate the best way to dislodge a footy stuck in a tree. 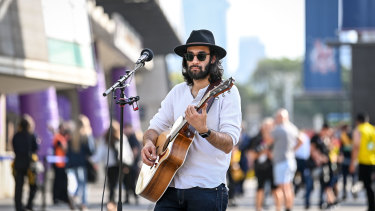 Musician Mukul Jiwnani came to Australia from India just before the pandemic started. With no time to see games before they were cancelled, tonight’s match was the first he’s ever attended.

“I didn’t expect this many people,” he said. “People seem more excited than they have been for a while.”

As he strummed a Coldplay cover, telling bystanders “they were all yellow”, he could have been talking about the sea of Richmond fans, which far outnumbered the Carlton crowd.

Perhaps the only difference was the repeated warnings to fans that they can’t move between different areas once they’ve entered the ground. With strict quotas in place, fans were told they had to abide by the rules.

The AFLW has been played in front of crowds since round one kicked off in January, mainly at suburban grounds around the city.

Keep up to date with the best AFL coverage in the country. Sign up to receive our newsletter twice-weekly during footy season.