Reason Party upper house MP Fiona Patten has told The Age that the curfew should go.

“If there are no health benefits to the curfew, then it should be lifted. Victorians need to see progress, we need to know that our sacrifices are having an effect. 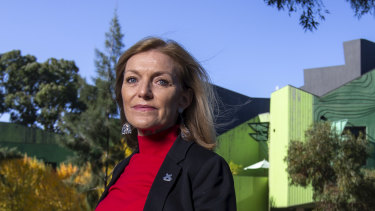 "People need to feel we are moving from stage four to like a stage 3.7 and so on as we go through this process. If we can’t travel more than five kilometres and all businesses are shut, what is the problem with someone walking the dog or having a jog in the evening?”

Her stance on the curfew means the Labor government is unlikely to have the numbers to win votes in the chamber next week when the Coalition ramps up pressure on the contentious lockdown restrictions.

Premier Daniel Andrews defended the restrictions on Thursday following revelations that neither Victoria Police nor Chief Health Officer Brett Sutton asked for Melburnians to be confined to their homes between 8pm and 5am.

As the controversy raged, lawyers and industry groups representing the night-time economy said the curfew had impinged on people’s rights, inflicted financial pain on the retail sector and led to shoppers congregating in larger numbers during the daytime.

However, a Roy Morgan poll released on Thursday found that 70 per cent of 2325 Victorians surveyed approved of the way Mr Andrews was handling his job as Premier and 63 per cent said the curfew should remain.

More than half the participants said Melbourne residents should now be able to visit immediate family members and 46 per cent said the five-kilometre travel limit should be lifted. More than three-quarters said the government should compensate all small businesses forced to close due to lockdown restrictions.

The curfew will be a major focus of the upcoming sitting week in state Parliament, although the Legislative Council will not have the power to rescind it.

But a planned Coalition move to force the government to provide all the advice behind the policy looks likely to have enough crossbench support to overcome any Labor objections.

In a separate move, Ms Patten and Andy Meddick, another crossbench MP whose support was vital in the emergency powers vote, want the government to release next Tuesday all advice underpinning the stage four lockdown.

Mr Meddick said he was broadly supportive of the curfew but it had not been explained properly to the public.

The Greens' acting leader, Ellen Sandell, said they too wanted to debate lockdown issues such as the single-person bubble restrictions.

Police Chief Commissioner Shane Patton said on Thursday that he was never consulted about the curfew, contradicting the Premier's claim that police told the government it would help them enforce restrictions.

''I was never consulted,'' Mr Patton told 3AW radio. “We had never asked for a curfew."

Mr Patton said the first Victoria Police knew about it was on August 2 when its policy department received a copy of the guidelines "a couple of hours" before the curfew was due to start.

As the Chief Health Officer said earlier this week that the curfew was not his idea either, Mr Andrews was asked in his daily press conference to reveal exactly who wanted the city shut down at night.

"Decisions are made by groups of people," the Premier said. "I can't necessarily pinpoint for you the exact individual and the exact moment that it was suggested that we put a curfew on."

He also said the curfew only prevented Melburnians from jogging at night and shopping "if the supermarket were open".

Mr Andrews said he might extend the curfew beyond October 26 if the infection numbers weren't low enough: “The plan talks about the [26th of October]. It may go beyond that. We will look at the data, we'll look at where we're at, we'll look at how close we are to achieving the very low case numbers that are essential to opening the place up. It's no more complex than that."

The curfew has riled some lawyers. Australian Lawyers’ Alliance spokesman Greg Barns described it as “a very dramatic incursion on the right to freedom of movement”.

Mr Barns said it was valid for governments to restrict people’s movement during a pandemic, but Victoria had “reached for the most extreme measures”.

“You perversely encourage disrespect because the longer it goes, people feel a sense of grievance about it and perceive it as wrong,” he said.

Jeff Rogut, the chief executive of the Australasian Association of Convenience Stores, said the curfew had decimated trade in many of its already struggling stores, particularly those in Melbourne’s CBD.

“We absolutely disagree with the curfew, particularly now that it has come out that it wasn't done for health reasons … or requested by police,” Mr Rogut said.

He said while most stores closed during curfew hours, a handful had remained open to serve permitted workers needing petrol and late-night snacks.

Mark McKenzie, chief executive of the Australasian Convenience and Petroleum Marketers Association said the curfew had led to a concentration of customers in petrol stations during daytime hours.

“We [used to] get a lot of traffic to our sites in the shoulder period of 8am to 11pm. That's all now being pushed into that prior period. We're sort of scratching our heads and saying, ‘How does this make sense from a health perspective?’ ”

State Opposition Leader Michael O’Brien repeated his calls for the curfew to be scrapped.

“Today we heard the Premier basically admit that the curfew was all his idea … he has gone rogue when it comes to the curfew.”

“How about you actually target the rule breakers and deal with them, instead of locking everybody down?"

Federal Health Minister Greg Hunt urged Mr Andrews to consider removing the curfew because it had not been recommended by Professor Sutton.

“We would like to see all and as many of the restrictions lifted as soon as the medical conditions allow. If there’s no medical basis for something then obviously that’s then something entirely within the remit of the Victorian government to address,” said Mr Hunt, who earlier this week pressured the state government to release more information about its modelling.

“And we’d encourage them to consider that in the coming days”.