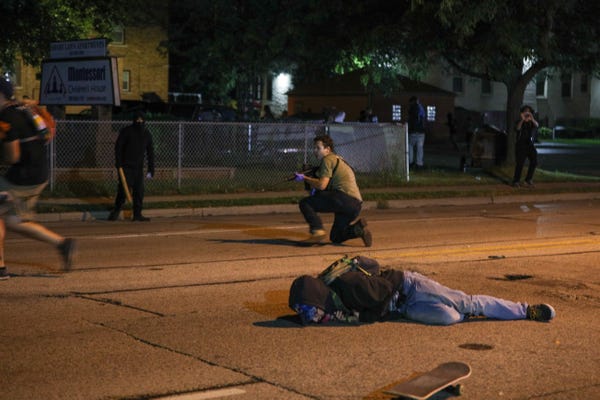 Two protesters are dead and one is injured after a 17-year-old white man from Illinois brought an illegally owned AR-15 rifle to the unrest in Kenosha, Wisconsin.

Kyle Rittenhouse was arrested in Illinois Wednesday on a first-degree murder charge after video taken in Kenosha showed him leave the area with his gun, The New York Times and USA Today first reported.

At a Wednesday press conference, Kenosha city and police officials didn't name Rittenhouse or the victims. Instead, they blamed everyone who was out passed the 8 p.m. curfew for the violence.

"Last night, in a situation that began peaceful and turned somewhat unruly … persons who were out after the curfew became engaged in some type of disturbance and persons were shot," Police Chief Daniel Miskinis said. "Had persons not been out involved in violation of that, perhaps the situation that unfolded would not have happened."

The small city of Kenosha has been in chaos since the police killing of Jacob Blake on Sunday.

Organized protests, and unorganized riots, have taken over the city at night, with people burning cars, businesses, and other property.

Rittenhouse is under the legal age to openly carry firearms, but joined the small groups of armed civilians who took it upon themselves to defend the town's businesses.

In one graphic video from the scene, Rittenhouse is shown running through a crowd of people in a street. One person appears to yell "That guy shot someone." He trips and falls and, as several people move close to him, he's seen opening fire.

Directly following the shooting, a group of police vehicles advances on the crowd. Rittenhouse walks toward them and can be seen alternately putting his hands up and touching his gun. As he approaches, the vehicles drive away and Rittenhouse gives them a slight wave.

Rittenhouse aspired to be a police officer

Web sleuths tracked down Rittenhouse using videos from the scene and social media hours before he was announced as a suspect in the shooting.

Rittenhouse had idolized police and had participated in programs aimed toward youth who aspire to work in law enforcement.

Miskinis stopped short of criticizing the teen who crossed state lines and fired the gun. He said he didn't have details on the shooting, or the shooter's motive, to release.

"A 17-year-old from Antioch, Il., was involved in the use of firearms to resolve whatever conflict that was in place," he said. "What I can't tell you is what led to the disturbance, what led to the use of deadly force by this person, and if both deaths are related to the same person."

Kenosha County Sheriff Dan Beth said Wednesday that the violence that carried out was an example of why he doesn't want to encourage civilians to take up arms on behalf of law enforcement.

"Yesterday I have a person call me and say, 'why don't you deputize citizens who have guns to come out and patrol the city of Kenosha,' Beth said. "And I'm like 'oh hell no."

While they might not have been working for the city, videos taken at the protests Tuesday show law enforcement thanking the armed civilians for being on city streets. In one video, they offer Rittenhouse water.

Reporters pressed city officials to say whether or not they want these civilians in the city working on their behalf.

"I don't want violence regardless of which side of any issue you're on, so showing up with firearms doesn't do us any good," Miskinis said. "It's no different than those on the protester's side who are walking around armed, or those who are counter-protesters, or those who are just witnessing."

"No, I don't need more guns on the street in the community when we are trying to make sure that we keep people safe," he said. "Law enforcement is trained. They're the ones who are responsible. They're the ones we have faith in that they'll do their jobs."