Couple say they are living ‘retirement from hell’ after mystery vandal twice covered their cars in paint and masked stranger beat up the husband, 70, outside their home

A couple are living out the retirement from hell after a series of mystery attacks.

Kay and Peter Lowe have been left shaken by an unknown vandal who covered their cars in paint, before a masked stranger beat up Mr Lowe outside their home in Maidstone, Kent.

The couple have lived on the neighbourly estate for 45 years and have no idea why they are being targeted.

Mr Lowe, 70, who suffered a heart attack four years ago, considers himself lucky to have escaped with minor injuries after the unprovoked assault sent him to hospital. 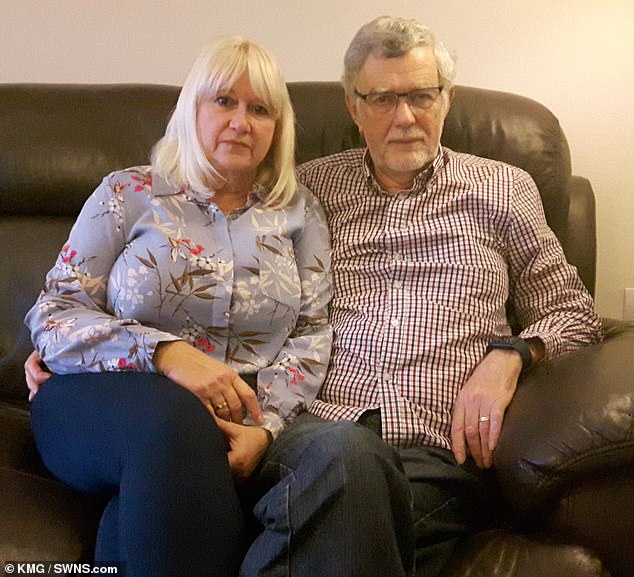 Kay and Peter Lowe are  being targeted in a series of mysterious attacks. They have had their cars covered in paint twice and Mr Lowe was beaten up by a stranger outside the couple’s home  in Maidstone, Kent

While his wife Mrs Lowe, 65, a former head teacher’s assistant, is so anxious she has been put on tranquillisers.

The first incident took place on September 19 when a neighbour knocked to ask if they knew paint had been thrown over the cars on their driveway.

Kay said: ‘It was white oil paint. It covered both our cars, the drive, the wall and front door.

‘It was clearly deliberate and clearly aimed at us.No-one else had suffered any vandalism but we were at a loss to know who would do such a thing or why.

‘We’ve had three insurance claims go through, my car was written off, we’ve had costs to the house insurance and we’ve just had more CCTV cameras put in.’

One month later, the couple arrived home in their car to find a man banging on the front door who asked ‘are you Pete?’

When told yes, the man immediately started punching Mr Lowe through the open car door who was left in fear of his life.

Mr Lowe a retired credit manager, said: ‘I’m afraid I was hysterical. It took a long time before I could calm down. 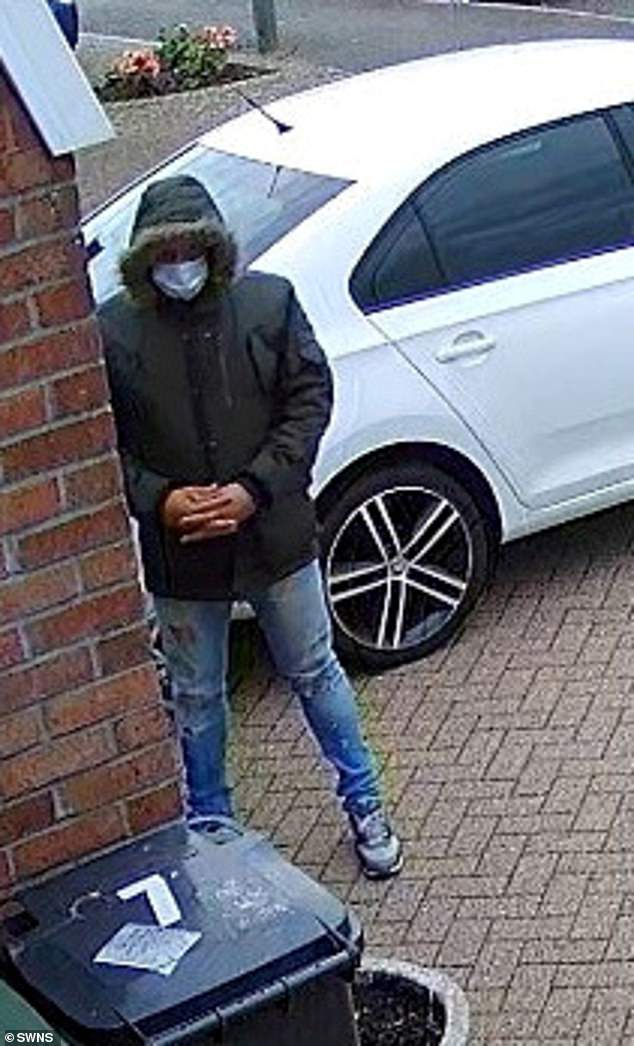 The pair’s CCTV  recorded the whole assault- the attacker  is a man in his 30s wearing jeans, a face mask and a Parka jacket

‘He just laid into me. The first blow was the worst. It broke my glasses and cut my eye.

‘After that I held my arms in front of me to protect myself and after he hit me about five more times he ran off.’

Police and ambulance attended and Mr Lowe, who has to take blood-thinning medicines after suffering a heart attack, was taken to hospital for a CT scan.

He said: ‘The paramedics were concerned that a blow to the head such as I had could cause a bleed on the brain, which might have been the end of me.’

The couple’s CCTV clearly recorded the whole assault but the attacker – a man in his 30s wearing jeans, a face mask and a Parka jacket with the hood up, was unknown to the couple.

On November 10, the couple found  they had been attacked for a third time when a neighbour knocked again to say there was paint thrown over the cars.

This time the CCTV caught the perpetrator, but he was in scene for only a few seconds and the picture is too grainy to identify him.

Kay said: ‘We both rushed to the window and my husband shouted ‘oh it’s happened again.’

‘He ran up with what looked like a coffee carton of paint in each hand and threw it immediately before turning to run off.

‘Now we feel like we are sitting ducks waiting for the next attack.’

The couple, who celebrated their 45th wedding anniversary on Sunday, have been left shaken and bewildered by the attacks.

The pair, who have two children and four grandchildren, are desperate for the perpetrator to be found and for the nightmare to end.

Mrs Lowe said: ‘I am up and down like a jack in the box all day and with every noise at night, I am up looking out the window.

‘Somebody out there knows who has done this and we just want it to end.

‘It’s a lovely estate and there’s just no sensible reason why anyone should have such a grudge against us.

‘If we have upset someone in some way, I just wish they would come round and discuss it face to face.’

‘We keep asking ourselves, who is doing this and why?

‘We’re worried it will just go on and on. I think the only way this is going to come to a conclusion when the police catch the man behind it.’