Unlicensed driver, 21, who killed boy, 13, in hit-and-run after losing control on a blind bend while speeding at 58mph in a 20mph zone is jailed for four years 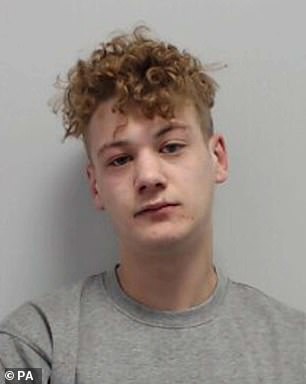 An unlicensed driver who killed a 13-year-old boy after speeding and losing control on a blind bend has been jailed for four years.

Liam Wilson, 21, who only had a provisional licence, was doing 58mph on a 20mph road when he lost control of the £250 Jaguar car he had bought just three days earlier.

He hit Jack Worwood, who was on his phone to his grandmother and was walking to meet friends to play football around 4.30pm on July 7, Bolton Crown Court heard.

Andrew and Catherine Worwood, parents of their ‘amazing, clever and funny’ son, later went looking for him only to find paramedics battling to save his life on the street in Old Road, Ashton-in-Makerfield, near Wigan.

A day later he died in their arms in hospital after they were told the catastrophic head and chest injuries he suffered were not survivable and his life support machine was being switched off.

Wilson, in trouble with police since the age of 10 with 14 previous convictions, ran off but was arrested the next day.

He admitted at an earlier hearing causing death by dangerous driving and was jailed for four years.

Passing sentence Judge Graeme Smith said: ‘The main cause of this collision was your greatly excessive speed.

‘You should never have been driving in the first place.’ 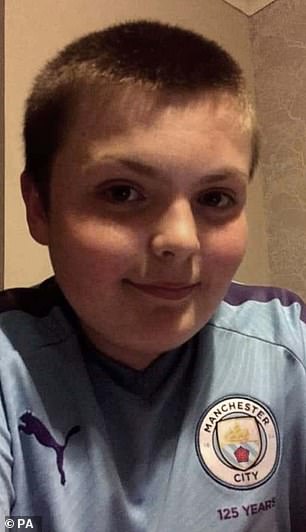 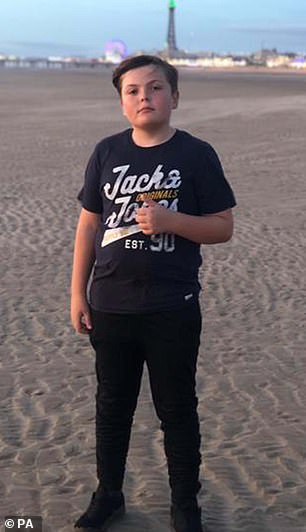 Jack Worwood, 13, pictured, died the day after the collision after his parents were told his injuries were to catastrophic for any hope of a recovery so they agreed to switch off his life support machine

Outside court relatives of the deceased clashed with those of the defendant, one woman shouting: ‘Four years is nothing!

Earlier, victim impact statements were read in court from Jack’s parents, saying their son, who had a brother and sister, was exceptional at maths and had his heart set on going to university to become an accountant.

‘I then realised it was my Jack they were desperately trying to save. 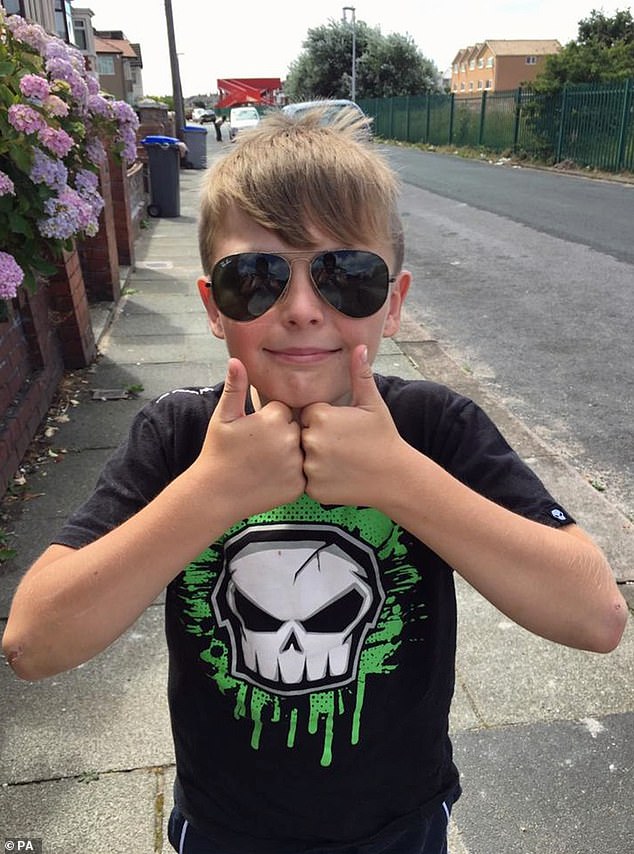 Jack’s mother Catherine Worwood said she will never be able to recover from her loss. She said Wilson had killed her son ‘and left him for dead’

‘I was told to expect the worst.

A day later hospital consultants told the family Jack’s life could not be saved.

The statement added: ‘I can never forgive you for this.

‘We sat there with him until the end, the machine turned off and watched him finally slip away from us.

‘You killed my son and I will never forgive you.

‘You will have your life, my son will never have his.’

Jack’s mother, Catherine Worwood’s statement said: ‘I don’t think I will ever heal from this.

‘He killed my son and left him for dead.’

Rob Hall, prosecuting, told the court Wilson, who was under investigation for a street brawl at the time of the crash, had bought the car, an old style Jaguar X type vehicle, three days before for £250, but it had no MoT and no insurance.

Wilson, of Livingstone Street, Ashton-in-Makerfield, was on his way back from a trip to KFC doing 58mph on a blind bend when he lost control and instead of braking tried to steer as the car ‘fishtailed’ before the vehicle ploughed into other parked cars and hit Jack walking on the pavement.

Neil Ronan, mitigating, said Wilson, who has learning difficulties, had an ‘appalling’ upbringing, with a heroin addict mother, who died last week, and no one to curtail his wayward behaviour.

‘He is riven with guilt and remorse,’ he added.

Wilson was also banned from driving for four years after his release from custody.

Jack’s father Andrew in a victim impact statement said: ‘You killed my son and I will never forgive you. You have your life and my son will never have his

‘No parent should ever have to make the decision to end their 13-year-old son’s life but you took that decision away from all of us with your selfish actions of getting behind the wheel of a car and driving when you shouldn’t have. I can never forgive you for this.

‘Losing our son feels like we’ve been given a life sentence that we can’t see a way out of. Our lives as a family are over. Our daughter Caitlin has not been home since Jack passed away. She cannot face being without him so not only have we lost Jack but we’ve lost her too.

‘Every aspect of family life is empty without him. Whenever I think of a future, I see a huge void.

‘Jack was exceptional at maths and wanted to be an accountant. He would have made it as he was bright enough. He was supposed to be my best man. I am unable to go to work now as a HGV driver.

‘It’s affected his friends, his grandparents, his uncle, his cousins and everyone who knew him.

‘You killed my son and I will never forgive you. You have your life and my son will never have his.’

Jack’s mother, Catherine Worwood, added: ‘Jack was a caring, kind and conscientious kid, a loveable rogue who had his whole life ahead of him. His innocence is something that is unbearable throughout his story.

‘Some people may say that he was simply in the wrong place at the wrong time but he wasn’t. Jack was innocent and had every right to be where he was.

‘Liam Wilson was in the wrong place at the wrong time. He broke the law, Jack didn’t. He killed my son and left him for dead. He is alive to tell the tale, Jack isn’t.

‘My whole life was turned upside down in less than 24 hours. I don’t think that I will ever heal from this. I will never see him graduate, marry, or have children – all the amazing milestones that a mother should share with her son.

‘No sentence will ever be enough. No amount of apologies will ever be forgiven. At the end of the day, is that all my son’s life is worth, a few years imprisonment?’