A MAN has been arrested after allegedly performing a sex act on himself outside Ibrox during Rangers' title celebrations over the weekend.

Thousands of supporters gathered at the stadium on Saturday afternoon after Steven Gerrard's side beat St Mirren 3 – 0. 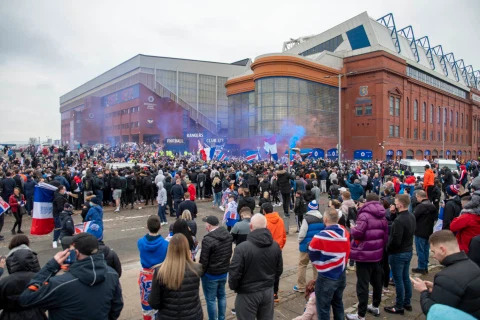 Scenes before Rangers' match on Saturday were marred by fans flouting lockdown rules to stage a pre-title party outside Ibrox.

Lots of footage of the celebrations spread on social media.

And cops launched an investigation into an alleged sexual offence close to the stadium in Govan.

Now detectives have confirmed that a man, 46, has been charged.

A spokesperson for the force said: "Police can confirm that a man, 46, has been arrested and charged in connection with an alleged sexual offence.

"He is due to appear in court at a later date."

Supporters descended on Ibrox on Saturday – against lockdown rules – to welcome players and staff ahead of the 3-0 win over St Mirren.

Fans then flooded the streets outside Ibrox, in George Square and Larkhall when the club were crowned champions as Celtic drew 0-0 with Dundee United on Sunday.

He also slammed the club over a "lack of leadership" and claimed the "silence" over fan gatherings "is deafening".

Police chiefs also let rip at Rangers fans who gathered in the city centre and at Ibrox and condemned a "lack of support" from the club.

Cops were attacked during the celebrations with 28 people arrested and seven fined amid alleged sectarian breaches.

Memorial benches were also destroyed in the celebrations, but Gers fans have raised money to repair any damage.