Matt Hancock misses the ‘WFH’ memo! Health Secretary has ‘absolutely no idea’ where his staff are working and says he doesn’t care as long as ‘they’re effective’ – despite Boris’s ‘back to the office’ drive to save the economy

Matt Hancock veered wildly off-message today by admitting he had ‘absolutely no idea’ how many of his staff were still working from home and was more interested in ‘how effectively people work’.

The Health Secretary’s comments came amid a massive push by Boris Johnson’s Government and business leaders to breathe life into the UK’s high streets by refilling the nation’s workplaces.

New Office for National Statistics (ONS) figures revealed this morning that Britain’s high streets are rebounding at a slower rate than shopping centres and retail parks.

They highlighted how the reluctance of staff to return to workplaces is harming businesses.

In an interview on Times Radio, Mr Hancock was asked if he knew what percentage of staff in the Department for Health were working at home.

‘I have absolutely no idea,’ he responded.

‘What I care about is how effectively people work and obviously people should come back to the office if that is what they need to do their job. 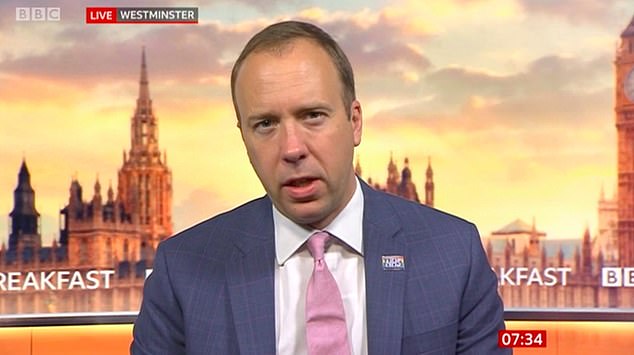 In an interview on Times Radio, Mr Hancock was asked if he knew what percentage of staff in the Department for Health were working at home. ‘I have absolutely no idea,’ he responded 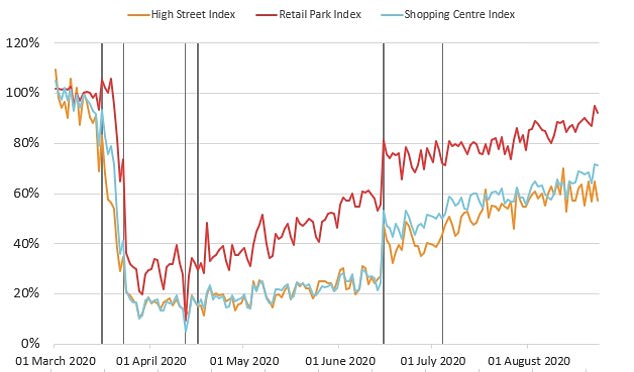 New Office for National Statistics (ONS) figures revealed this morning that Britain’s high streets are rebounding at a slower rate than shopping centres and retail parks.

‘And also employers need to make sure the offices are Covid-secure, as we have obviously in the Department for Health, as you would fully expect us to.

‘But what I care about is that people perform and so the people I work with, some of them have been working from home, some come in sometimes, some are in full-time, and what matters to me is that they deliver and, frankly, they’ve been delivering at an unbelievable rate.

‘I mean, you know, there’s sometimes this caricature that people who work in the Civil Service work a 9 to 5 day, it’s just completely untrue in my experience.

‘And people are working incredibly hard because, ultimately, it’s a mission-driven job and, in the middle of a pandemic, the whole department has stepped up to that mission.’

Writing in the Mail, Dame Carolyn, the director-general of the CBI says getting staff back into offices and workplaces is as important as the return of pupils to school.

‘The UK’s offices are vital drivers of our economy. They support thousands of local firms, from dry cleaners to sandwich bars. They help train and develop young people. And they foster better work and productivity for many kinds of business,’ she said.

‘The costs of office closure are becoming clearer by the day. Some of our busiest city centres resemble ghost towns, missing the usual bustle of passing trade. This comes at a high price for local businesses, jobs and communities.’

Dame Carolyn’s intervention will pressure the Prime Minister to match his rhetoric on the need to return to school with similar words – and action – about workplaces.

But the Health Secretary also said that getting staff back to work is a matter for employers.

‘But employers are doing that and the rules are clear about that.’

He added: ‘I see that the CBI yesterday put out a statement saying that people need to get back to the office, and I’ve been talking to the chief of the CBI about what more we can do in addition to saying that the rules are that this is a matter for employers so long as their place of employment is Covid-secure.

‘And of course we’ll work with the CBI on the things that they want to see to help make this happen.’