Baghdad: At least six missiles targeting Irbil international airport in northern Iraq were intercepted on Wednesday evening (Thursday AEST), a statement from the Kurdish Interior Ministry said, as diplomatic tensions between Washington and Baghdad mounted over a spate of rocket attacks targeting the US presence. 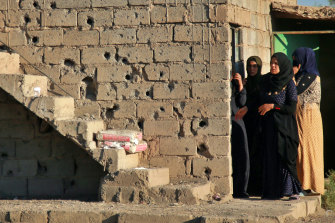 Women inspect the aftermath of a katyusha rocket attack near international airport in Baghdad, Iraq.Credit:AP

According to the statement, the missiles were intercepted at 8.30pm and did not cause any major damage. Two Kurdish officials said one of the rockets hit the headquarters of an Iranian-Kurdish opposition party banned in Iran. The officials requested anonymity in line with regulations.

The statement said the rockets were fired from a ute near Bartella, south of Irbil in Nineveh province, which are areas under the purview of Brigade 30 of the Popular Mobilisation Forces. The brigade is composed of ethnic Shabak militiamen. The PMF is an umbrella grouping of mostly Iran-backed Iraqi Shiite militias that is part of Iraq's armed forces.

The Iraqi military said the perpetrators were “terrorist groups” and that one rocket had landed close to Hasansham camp for internally displaced people. 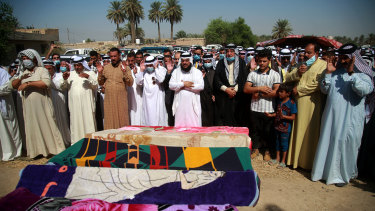 Mourners pray over the coffins of civilians killed by a Katyusha rocket attack near the international airport in Baghdad on Tuesday.Credit:AP

Washington blames such attacks on Iranian-backed militia groups. Iran has not directly commented on the incidents

The frequency of the attacks led to US threats last week to close its Baghdad embassy unless decisive action was taken to reign in Shiite militias suspected of launching the attacks. Iraq's foreign minister on Wednesday said the government was taking measures to consolidate security in the Green Zone and airport.

The attack in Irbil, a rare target for rockets, is considered a serious escalation by Iraqi officials.

Kurdish officials, and former Finance Minister Hoshiyar Zebari, said the incident was “yet another escalation” to undermine security in the country by “the same groups who are attacking the US embassy in Baghdad and its convoys. Action is needed to stop it.”

Related posts:
TV and Movies
Real Housewives’ Rachel teases drama ahead of Lystra Adams’ debut with a ‘bang’
Vikings’ Katheryn Winnick reveals huge announcement for directorial debut ‘Wow!’
Jon Hamm on the 'Fletch' Reboot: 'We’re Not Going to Remake the Chevy Chase Version'
The 4 Best 'American Horror Story' Episodes, Based on IMDb Ratings
Recent Posts
This website uses cookies to improve your user experience and to provide you with advertisements that are relevant to your interests. By continuing to browse the site you are agreeing to our use of cookies.Ok