How to embarrass your daughter! Hilarious moment teenage girl freaks out when her mother rolls down her car window next to a ‘cute guy’

This is the hilarious moment a mother embarrasses her teenage daughter by rolling down the window of her car after they pull up next to a ‘cute guy’.

Instagram star Karsen Veazey posted the footage of her embarrassment online where it has attracted more than 16 million views.

The 19-year-old social media influencer was in a car with her mother in Tuttle, Oklahoma when they pulled up to a set of traffic lights. 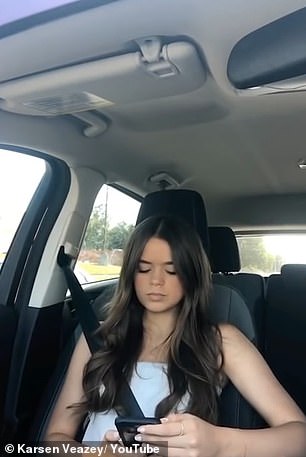 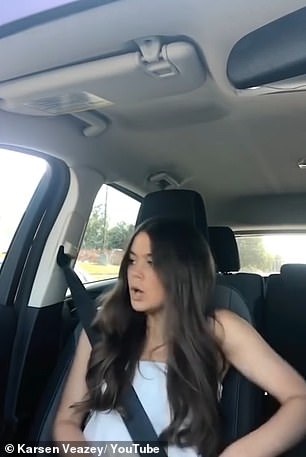 Karsen Veazey was videoing herself while on a trip with her mother in Tuttle, Oklahoma

A dashboard-mounted camera filming inside the vehicle records Veazey’s mother pointing out of the passenger window and saying: ‘He’s cute.’  as they pull up beside a ‘truck full of guys with their windows down’.

Veazey’s mother then rolls down the teenager’s window and her daughter slides down in the seat trying to duck out of sight.

Veazey undoes her seatbelt and squeals hysterically while trying to hide in the footwell of the vehicle. 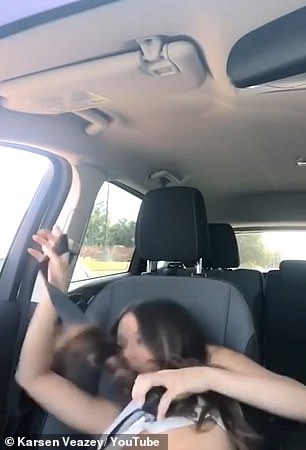 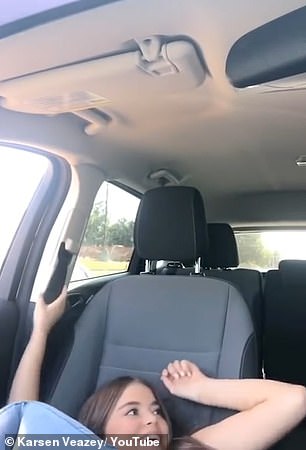 Veazey, pictured, hid in the footwell of the car so the ‘cute guy’ couldn’t see her. She then posted the footage on the internet where more than 16 million people have viewed it.

She pleads: ‘Mom, mom, stop,’ hilariously alternating it with instructions to ‘Go’ instead.

As she sprawl in the footwell, the teenager looks up at her mother and complains that she has to ‘sit here now’.

Posting the footage online, Veazey commented ‘All I’m saying is I should’ve saw it coming.’

Viewers on her social media found the clip hilarious, saying her mother was ‘cool’, ‘funny’ and legendary.