People still in the park after the curfew was enforced were filmed jeering and shoving cops after being told to leave, with scuffles breaking out as NYPD cops moved to enforce the new curfew, which is aimed at tackling rampant anti-social behavior and crime in the Manhattan hangout spot.

Police used pepper spray to disperse the crowd afterwards, with some people throwing bottles at officers. One shirtless man was arrested after he was caught on camera trying to square up to officers with a metal barricade.

Cops could then be seen using physical force, including pushing and grabbing. Some were filmed using their bikes and batons to shove parkgoers who had formed a human chain. 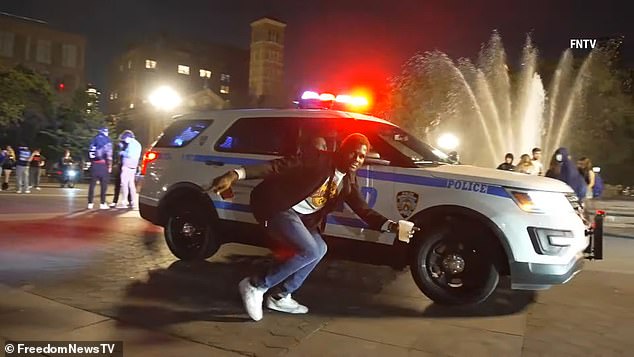 Police used riot shields, batons and even their patrol cars in order to force parkgoers to leave 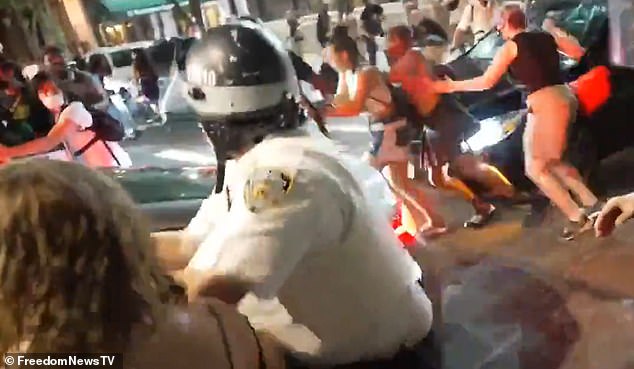 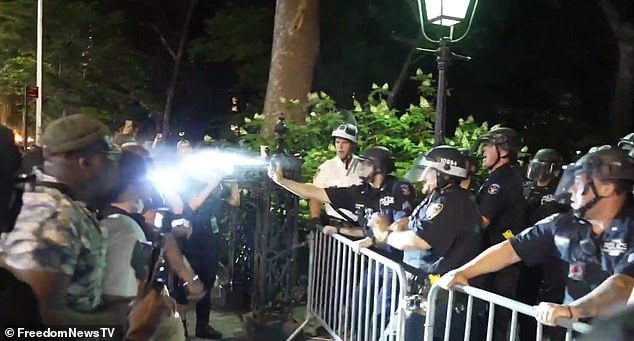 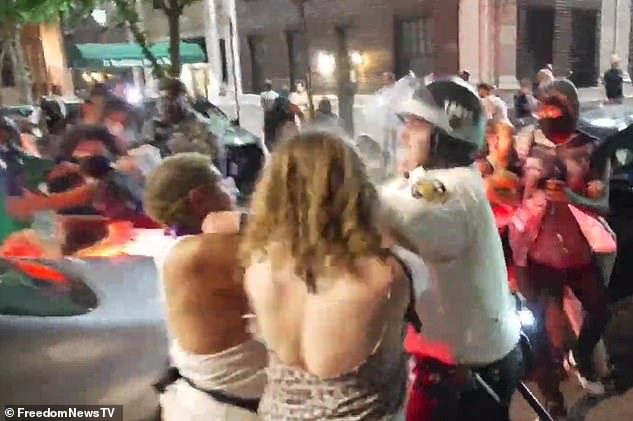 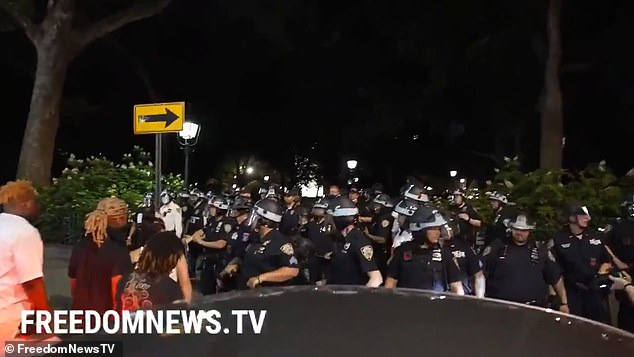 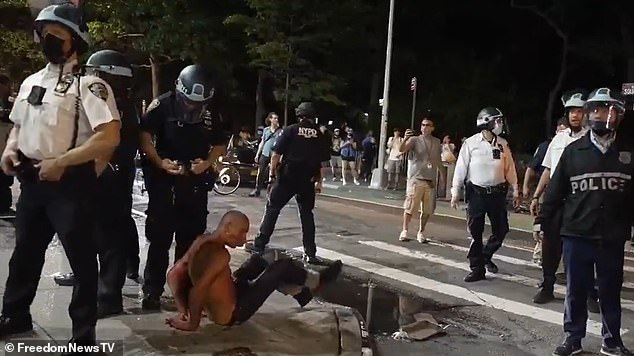 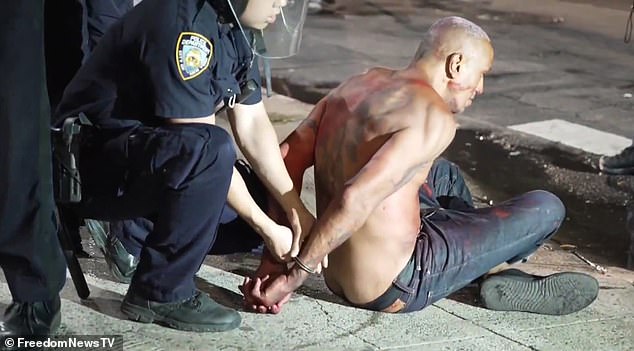 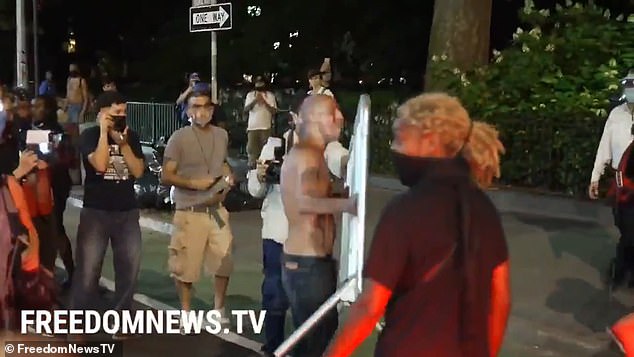 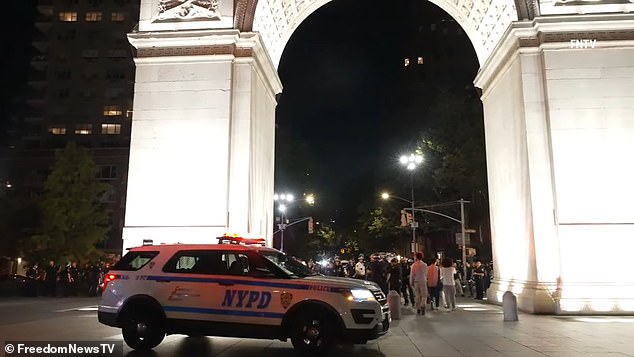 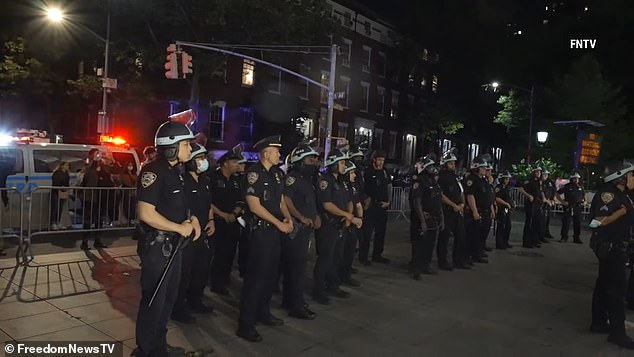 One cop was hit after a garbage can was thrown at them while another pulled a shoulder, according to the New York Post.

Another officer is said to have suffered a possible broken finger while two other officers were hit with bottles.

‘After cops shut down the Washington Square Park arresting multiple people who refused to disperse, they chased remaining crowd through West Village. People ran through restaurants and streets, cops chased and arrested them,’ wrote video journalist ScooterCasterNY on Twitter.

‘[It was] total chaos with pepper spray, bottles thrown and cops chasing people.’

The police were accused of being heavy handed from the very start as officers in riot gear were seen marching into the public space to tell those gathered there to leave.

The park previously closed at midnight, but widespread drug taking, partying and other anti-social behavior led to complaints from well-heeled residents in the upmarket area, with Mayor Bill de Blasio announcing the curfew in response to the crisis last week.

At one point a shirtless man threatened riot-clad officers with a broken bottle before attempting to throw a metal gate at law enforcement. He was subsequently arrested.

‘The NYPD is once again violently evicting everyone in Washington square park and violently arresting people,’ tweeted Josh Potash.

‘Cops at every entrance now, students, random people partying, unhoused folks, and other random folks are still being attacked in the edge of the park,’ he added.

Several police cars entered the park from different sides announcing over their speakers that the park was closed and that people still inside had to leave – or face arrest.

Those who decided to remain had to be forcibly remove by police before metal barricades were pulled across the entrances to the park in order to keep others out.

The park was cleared within 15 minutes of police arriving on the scene. 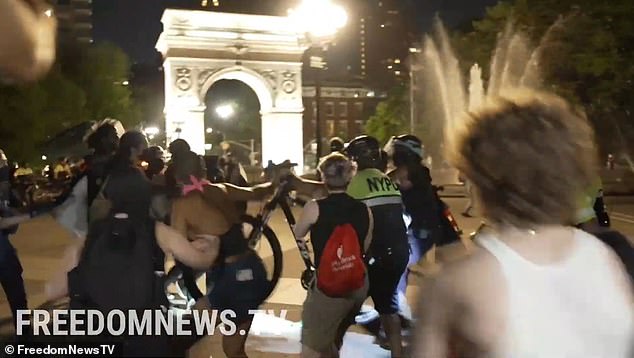 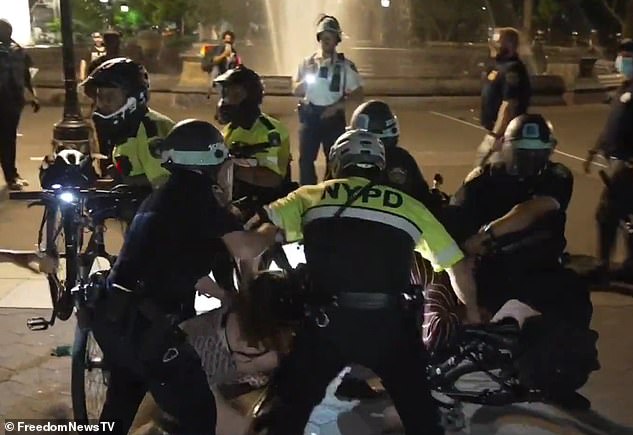 Officers used their bikes to try and push people out of the way, with some people who refused to leave toppling to the ground 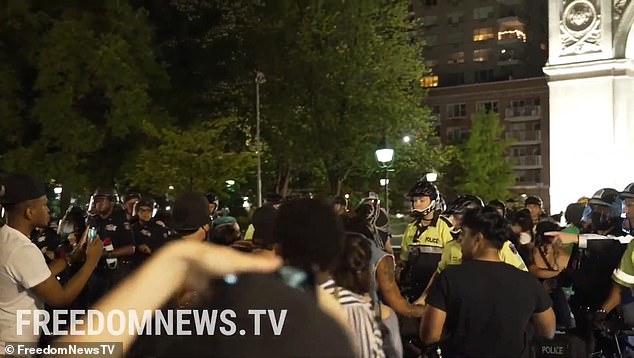 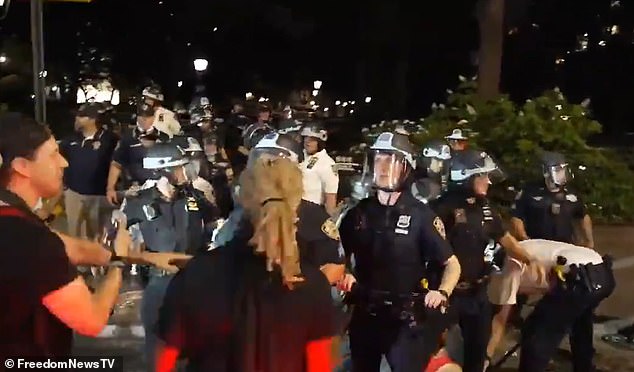 Parkgoers refusing to leave after the curfew pushed back against officers who used physical force to try to remove them, videos of social media showed 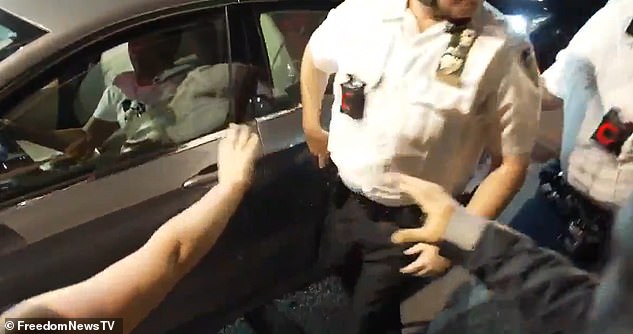 ‘Hell no! We won’t go!’ some chanted as police said the park was closed.

The park was originally shut down at the relatively early hour of 10pm last weekend after a neighborhood organization complained of noise, left over trash in the morning and parties that ran late into the night.

Crowds of rowdy people have been hanging out in the park until the early hours of the morning with loud music and anti-social behavior.

Later statements also alluded to ‘crimes’ that were occurring within the park’s boundaries. 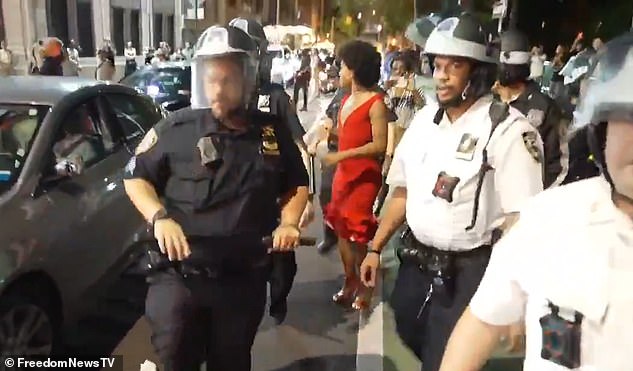 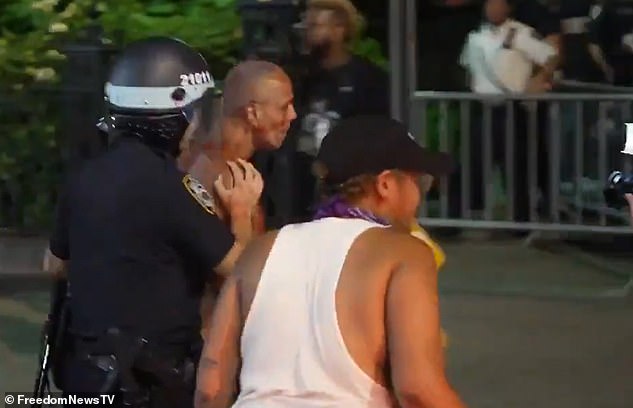 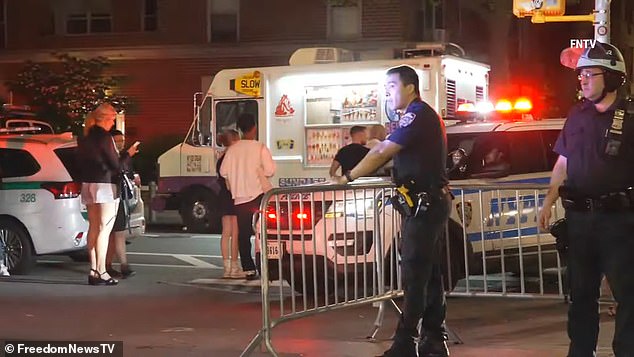 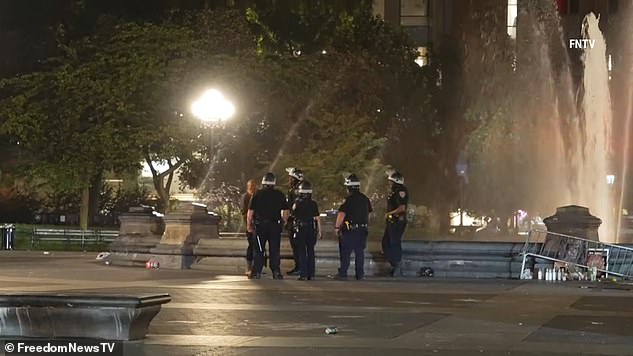 ‘A lot of community residents have expressed concerns. Parks historically have had a closing time. This is an effort to make sure there is real respect for community concerns about noise and safety,’ said Mayor Bill de Blasio earlier in the week.

NYPD and the parks department have said the earlier curfew will be in place indefinitely.​

Some park-goers claimed the reported issues were overblown, and moaned about the new closing time.

‘I think the curfew is stupid,’ Wayne Evans said to NY1. ‘I come here often at night, and I stay late, I stay until 1, 2 o’clock in the morning and people are just out here having fun. There’s no funny business.’

‘That’s ridiculous and it’s summer time, too,’ Omar Nurridin said. ‘I don’t think they’re going to really do a good job of enforcing that, or it’s a setup to give people a bunch of tickets.’

Crime in the 6th Precinct is up 62 percent in the last year, and now activities like drug use and prostitution plague the park, causing it to shut down on Friday, Saturday, and Sunday nights at 10, two hours earlier than the usual midnight closure. 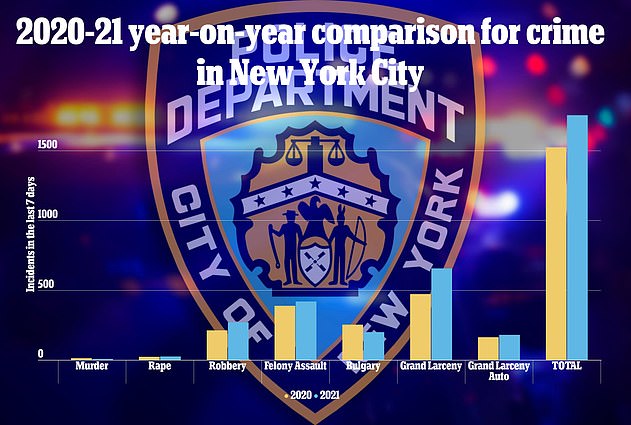 A chart shows crime levels are significantly up in 2021 compared to 2020 for most crime categories, though burglaries are notably down 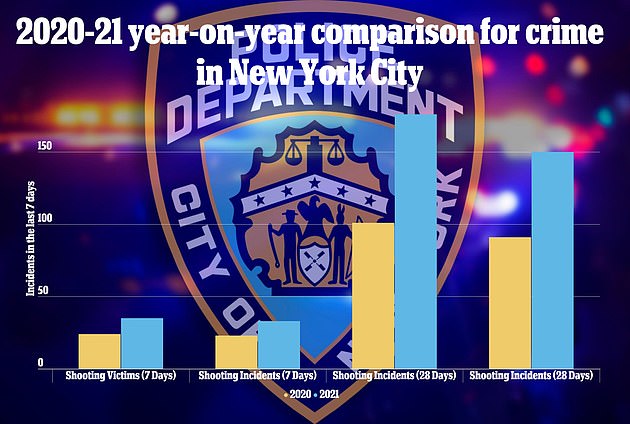 Many New Yorkers will likely support the Washington Square Park crackdown, amid fears the city is sliding back to the crime-ridden ‘bad old days’ of the 1970s and 1980s.

Figures from the NYPD’s Compstate website show serious crime rose by 23.4 per cent in May, compared to the same month last year.

Mayor de Blasio has repeatedly been accused of being ‘pro-criminal’ by critics. They say his bail reforms – intended to avoid leaving people who can’t afford bail languishing in jail for months or years for petty crimes – releases suspects back onto the streets to go on to reoffend.

Morale among the NYPD has slumped amid lukewarm support from de Blasio. Crime on the city’s transit network – including its buses, subways and trains – doubled in May compared to May 2020, up from 78 last year to 154 this year.