Has New York coronoavirus peaked? Daily death toll falls to 594 from 630 prompting Gov. Andrew Cuomo to suggest the crisis may have reached apex as hospitalizations and ICU admissions fall

The daily death toll in New York dipped Sunday, a sign that the state may have hit the apex of the pandemic, Andrew Cuomo said.

A record 630 deaths were reported Saturday. The numbers Sunday reflect the first time fatalities have dropped over 24 hours in a number of days.

Governor Cuomo hesitated to say the worst was definitely over for the Empire state but added: ‘The apex could be a plateau and we could be on that plateau now. We won’t know until you see the next few days, does it go up, does it go down.

March 22 marked the last time less than 600 new hospitalizations were recorded, with 586. 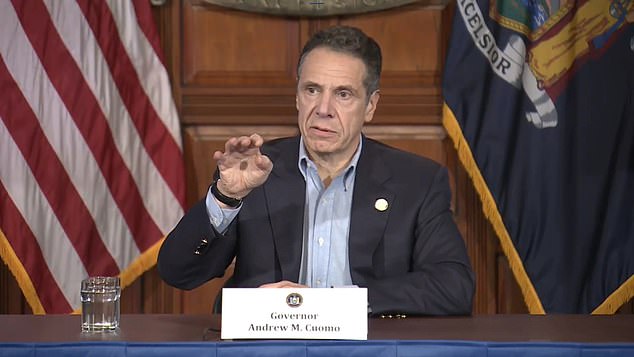 Governor Cuomo, pictured Sunday, hesitated to say the worst was definitely over for the Empire state but added: ‘The apex could be a plateau and we could be on that plateau now’ 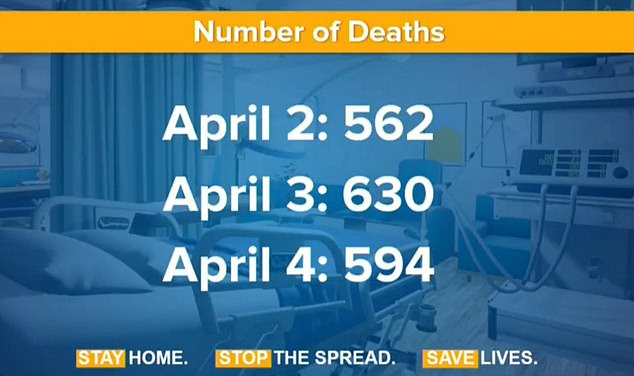 The daily death toll in New York dipped Sunday. There were 4,159 fatalities as of Sunday 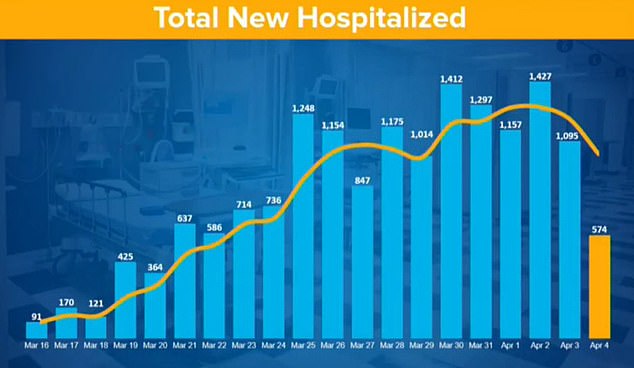 There were 574 new hospitalizations Sunday Cuomo said – down from 1,095 on Saturday

Cuomo said of the dipping death toll: ‘What is the significance of that it is too early to tell.’ He said officials will be able to tell ‘by next week’ if  the figures represent a plateau or dip.

But he did warn there has been a ‘shift to Long Island’ and acknowledged there is ‘overcapacity across the board’ with a ‘tremendous amount of stress on the system’.

‘We are running short of supplies across the board. We are literally going day to day with supplies and staff.’

Cuomo told reporters: ‘For those people who look at the data, you have all these projection models and what’s been infuriating to me is the models are so different that it’s very hard to plan when these models shift all the time.

‘In other words you go up, hit the high and the immediately drop, or do you go up and then there’s a plateau where the number of cases stays high for a period of time and then drops? There’s a difference of opinion.

‘So you have to think about that when you think about what you’re seeing in the numbers because you could argue that you’re seeing a slight plateauing in the data which obviously would be good news because it means you plateau for a period of time and then you start to come down and we’re all feeling our way through this and we have the best minds in the country, literally on the globe, advising us because New York is the first. I also think it will be very helpful for the other states that follow.’

Noting the ‘cabin fever’ New Yorkers may be feeling as a result of isolation, Cuomo said he will be taking up daily runs alongside his family.

He also noted that the crime rate is down in New York City as are hospital admissions for traffic accidents and other traumas.

Cuomo said ‘rapid testing will be the answer’ to the stop the spread of the virus. But said ‘we are not going to make ventilators in two weeks’ in response to companies such as Tesla offering to build the machines.

The governor, whose state is the epicenter of the outbreak in the United States, said New York was part of an effort to develop a program that would identify people who are both negative and not in a vulnerable category, allowing them to go back to work.

A stark new model – created by researchers from the University of Washington’s Institute for Health Metrics – shows New York will reach its peak in five days with 855 deaths on April 10.

Cuomo added: ‘I think you see the return for normalcy when we have an approved rapid testing program that can be brought to scale.

‘People can go back to work because they know they’re negative. I think that is under development, but that is going to be the end and we’re going to get through it because we’re New York tough.’

He added: ‘There’s not enough in the federal stockpile to take care of New York and Illinois and Texas and Florida and California. It’s just not an option.

‘The only option I see is there’s a national deployment. Everyone says this is wartime. It is a war, and the virus is the enemy. Help New York today and then nationally, we shift the resources to the next place that is most impacted.’

Donald Trump reportedly told NFL commissioner Roger Goodell that the football season will still begin in September in a conference call on Saturday as the president claimed we ‘have to open our country again’.

Asked about the return of sport Cuomo said: ‘I would love to see sports back. It would help with cabin fever. But this is not about hopes and dreams and aspirations and what you would like to see.

‘None of us like being here. Follow the data, follow the science. Let the doctors and health-care professionals tell you when it’s safe to reopen and that’s when you reopen.’ 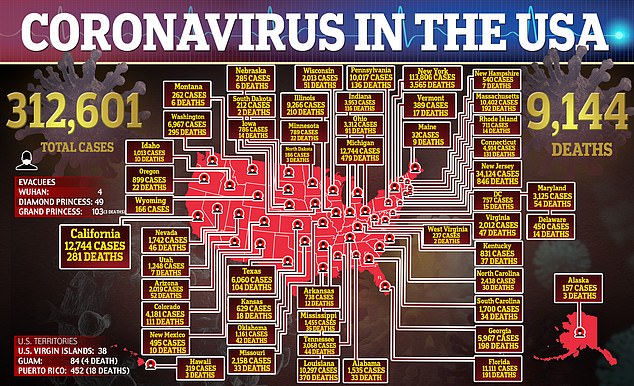 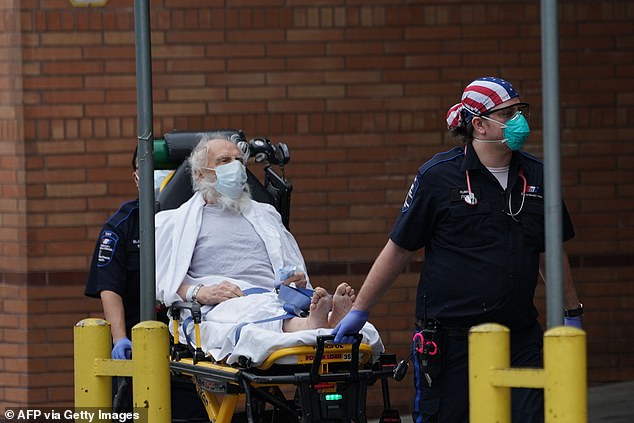 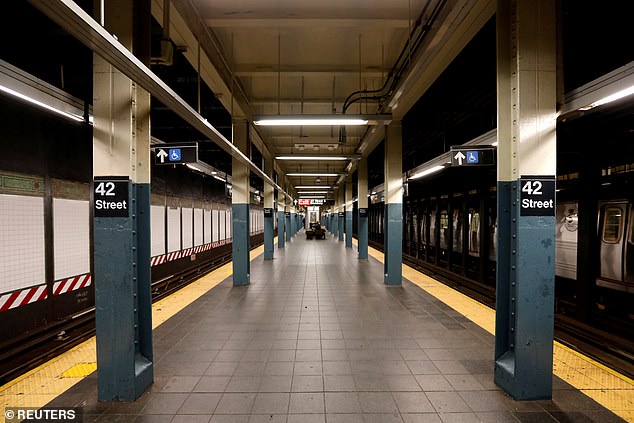