If you want a Christmas casual job at The Body Shop you don’t need a resume, a reference, a background check or even an education.

Instead, you’ll be asked three simple questions: are you legally authorised to work in Australia, can you lift up to 11 kilograms and work an eight-hour shift and are you happy to work with customers?

The Body Shop is one of the first major retailers in Australia to adopt this unorthodox method of recruitment – known as open hiring – which is targeted at people who have traditionally faced barriers to employment, such as the homeless, single parents, young carers and First Nations Australians. 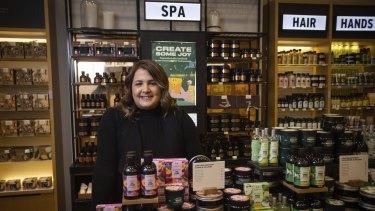 “So many people haven’t had opportunities, they haven’t been given the same access to things that a lot of us enjoy,” says Shannon Chrisp, The Body Shop’s Asia Pacific brand and activism director.

“We really want our stores to be diverse and inclusive, we want people to come into our stores and feel represented.”

Open hiring was pioneered by Greyston, a New York bakery founded in 1982 by Buddhist Zen master Bernie Glassman, which employs anyone, including former prisoners, on a first-come-first-serve basis.

No questions are asked about a person’s history in line with the Buddhist principle of non-judgment.

In 2018, Greyston opened the Centre of Open Hiring, and has partnered with other companies, including The Body Shop, with a goal of filling 40,000 jobs through open hiring by 2030.

“What they did was quite revolutionary,” Ms Chrisp said.

This is the third year The Body Shop has implemented open hiring in its US stores and distribution centres and the company is also rolling it out in Canada and the UK.

For the first time this year it will use open hiring to recruit up to 380 Christmas casuals across Australia, with about 15 per cent of these people who have experienced homelessness, young carers, First Nations Australians and single parents.

While recruitment in NSW and Victoria has been delayed due to COVID-19, casuals have already started in Western Australia, Tasmania, ACT, Queensland and South Australia.

The three simple questions asked by The Body Shop

“For a large global company like The Body Shop to say we will give anyone who wants to work a go is phenomenal and a breath of fresh air,” she said.

APM had put forward people with disabilities, single parents, Indigenous people and people from a non-English-speaking background, with candidates successful from each cohort.

The Body Shop’s inclusion and belonging lead Michelle Nolan said people recruited via these organisations were given a head start to apply via an exclusive online link.

“You go by date order – it literally is first in best dressed,” Ms Nolan said. “If you have 100 applications you go to the first person who applied, and you allocate, and then you move to the second.”

Candidates are then invited to meet the managers of their preferred store who run through the inherent requirements of the role – such as length and frequency of shifts – at an informal meeting.

If they can meet these, the job is theirs.

Jaspal Giff, the manager of the Murray Street Body Shop store in Perth, said it was great to get to know a potential employee in a relaxed setting.

“It was interesting because I’ve never done that before, but I am all up for it,” she said.

“In interviews people can be quite nervous and they don’t really show their personality. I think this is a fantastic way to go.”

Katelyn Eustace has been employed as a Christmas casual at the Murray Street store in Perth after being out of the workforce for eight years caring for her mother. Her employment services agency, APM, encouraged her to apply.

“Since I signed up with APM 18 months ago, I’ve only had one job interview, everything else has just been rejection emails,” she said.

“This is giving me a foot in the door to get back out there with work and meeting new people.”