New York City’s 10,000 homeless people will be moved BACK into shelters after a barrage of complaints about encampments in Manhattan’s wealthiest neighborhoods

The mayor of New York, Bill de Blasio, has been forced to make a u-turn when it comes to the fate of the city’s homeless and will now move thousands who are currently residing in hotels, back into shelters.

De Blasio has said the process will begin immediately although the mayor did not provide an end date by which time all of New York’s homeless would be out of city hotels and off the streets. 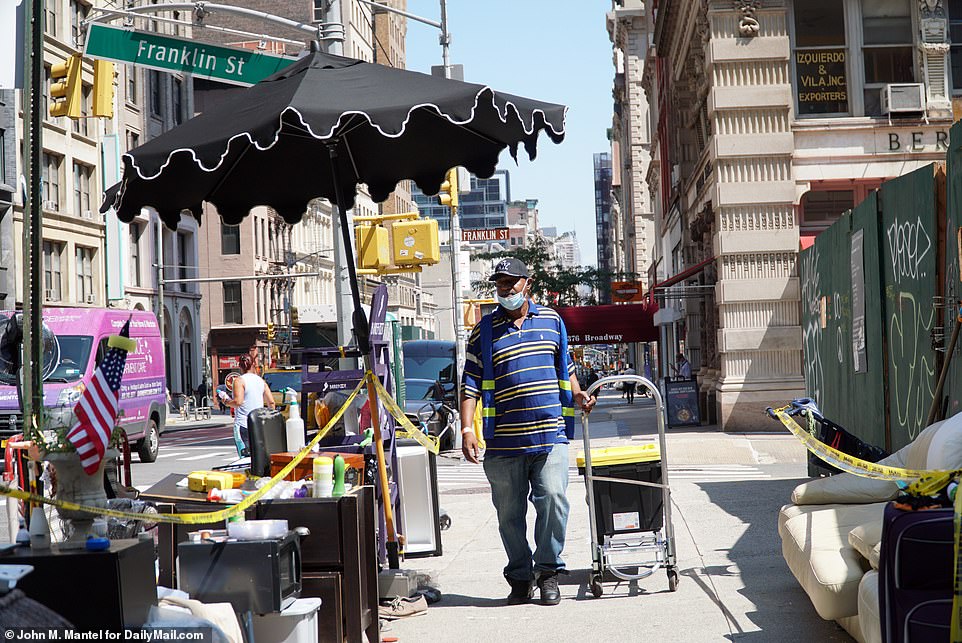 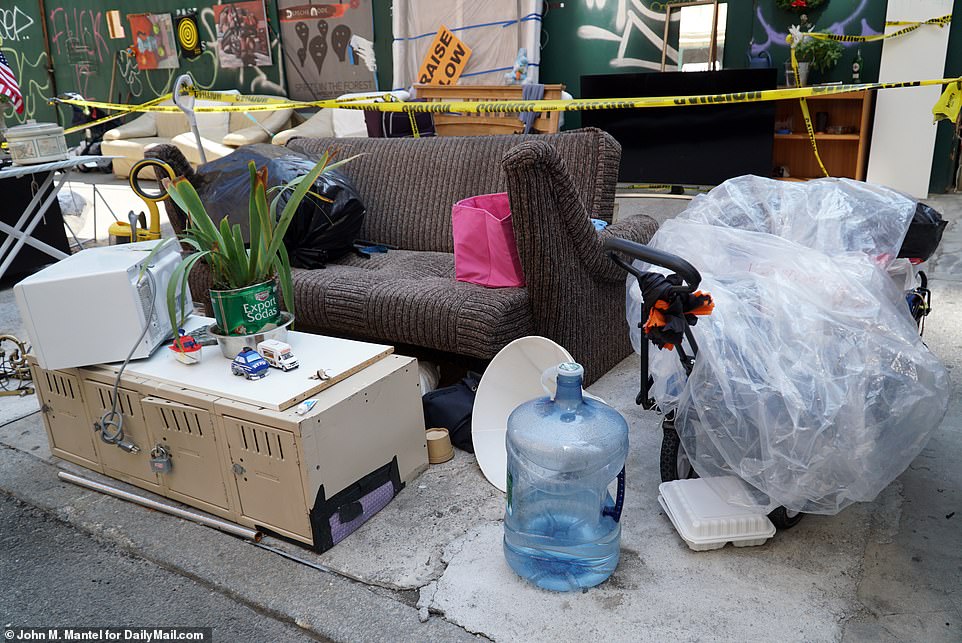 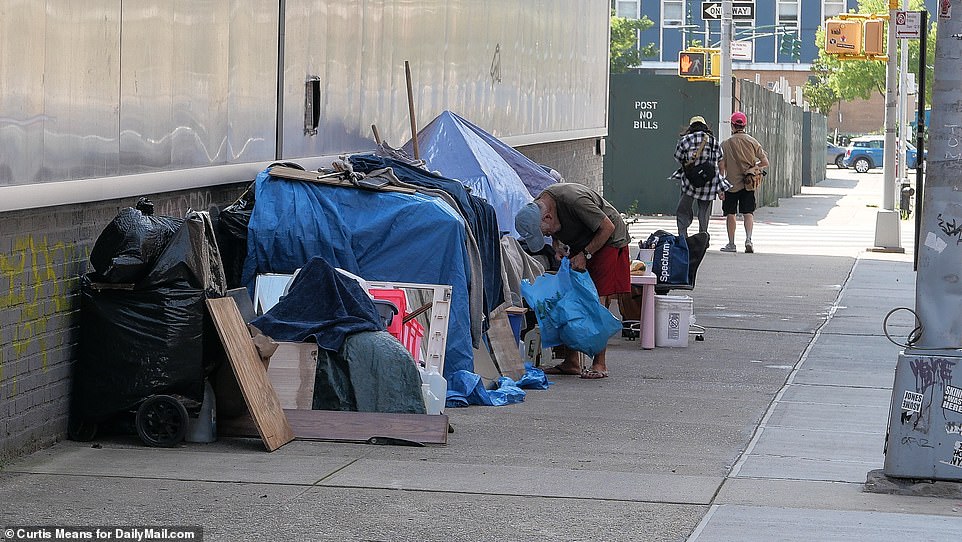 Some New Yorkers have blamed the rising crime rate on the homeless. However police have put that down to the release of people from jail due to COVID-19

‘As the health situation continues to improve, we’re going to start the process of figuring out where we can get homeless individuals back into safe shelter facilities and reduce the reliance on hotels,’ de Blasio said at a press conference.

‘Hotels are certainly not where we want to be in general, and we’re going to start that process immediately.

‘On the specific quality-of-life issues, it’s incumbent upon every city agency involved to get out there and solve them,’ de Blasio said, referring to the NYPD, DHS, and the Health and Sanitation departments.

The mayor said that the city would ‘make sure we can start to get people out of those hotels, relieve some of the pressure on those communities, but do it in a way that’s really safe for everyone involved, starting with those who are homeless.’

As the pandemic struck, the Department of Homeless Services (DHS) moved 10,000 homeless people from shelters into hotels. At least eight were identified as being in Hell’s Kitchen with several more along the Upper West Side areas of Manhattan.

Thousands of homeless people ended up being moved into hotel rooms after fears Covid-19 was spreading fast inside crowded city shelters.

But it has led to a barrage of complaints from locals who are upset and concerned about aggressive panhandling, public urination and drug use, among others.

Some displaced people have been seen doing drugs, urinating and cat calling in the streets, which are free from tourists with a widespread travel ban due to the COVID-19 outbreak.

‘I’ve instructed all of them to address these issues as they come up and make sure that neighborhood residents see that these concerns are being addressed,’ de Blasio noted. 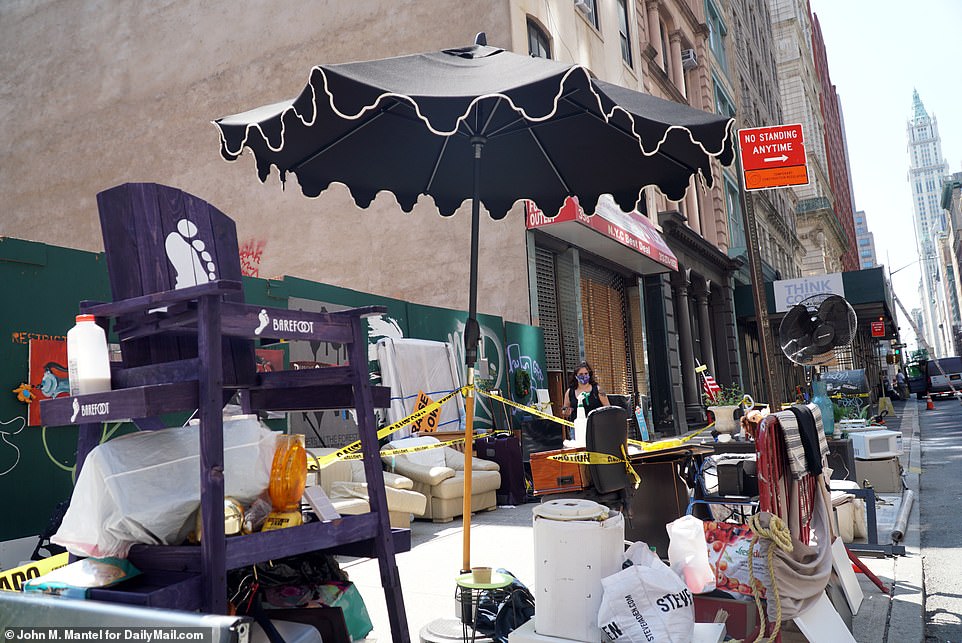 Thousands of homeless people ended up being moved into hotel rooms after fears Covid-19 was spreading fast inside crowded city shelters, and now a number of encampments have arisen in all parts of the city including Lower Manhattan 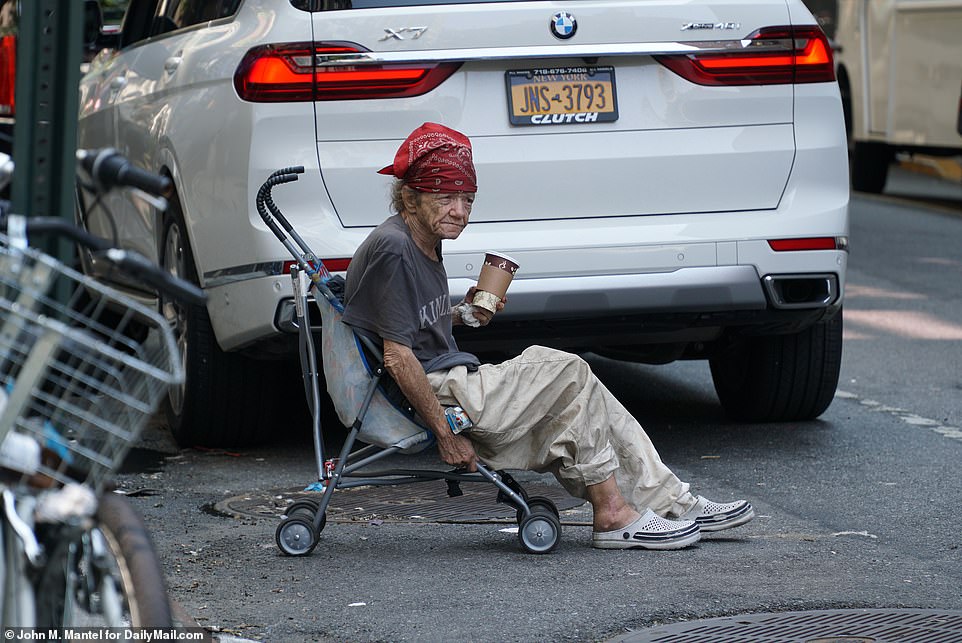 A woman is seen begging for money on the unusually quiet streets of Manhattan. The complaints about the rising homeless numbers have led to a U-turn by the mayor who had earlier suggested that those who were homeless could remain in hotel rooms until Covid-19 vaccine had been produced 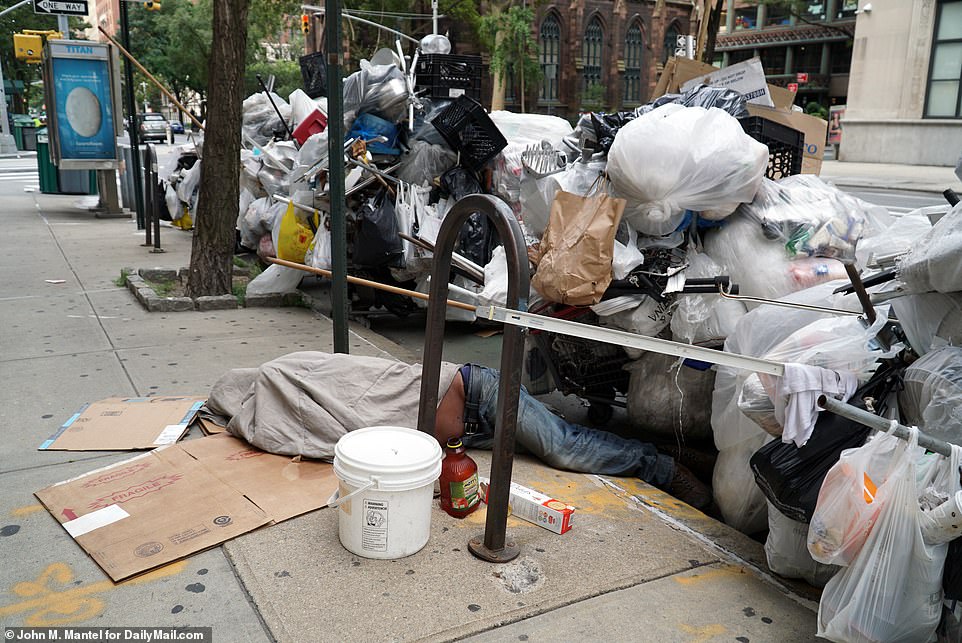 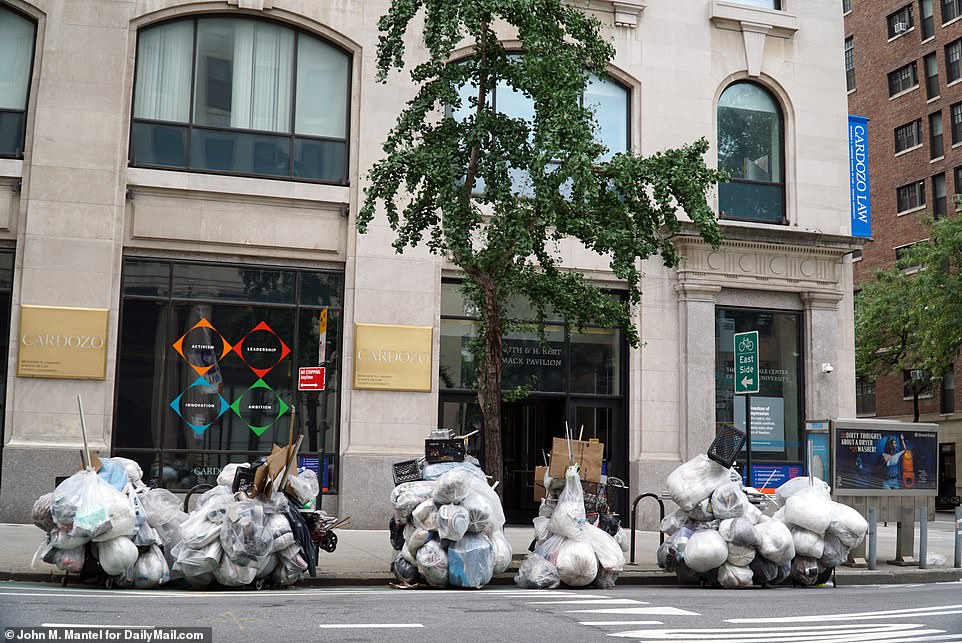 Although the plastic bags may look like trash, they are the belongings of homeless people. Seen here along Fifth Avenue

The mayor stressed that in order for the homeless to be moved out of hotels, the city would need to ensure that there is enough safe space in existing shelters.

‘We’ll have more to say on that as the plans are more deeply developed and as we see what the health situation shows us,’ he added.

The complaints have led to a U-turn by the mayor who had earlier suggested that those who were homeless could remain in hotel rooms until Covid-19 vaccine had been produced which is likely to take at least six months.

‘It’s a matter of months until there’s a vaccine and the crisis is over — then we’re going to bring people back into the shelter system out of those hotels,’ he said earlier in August. 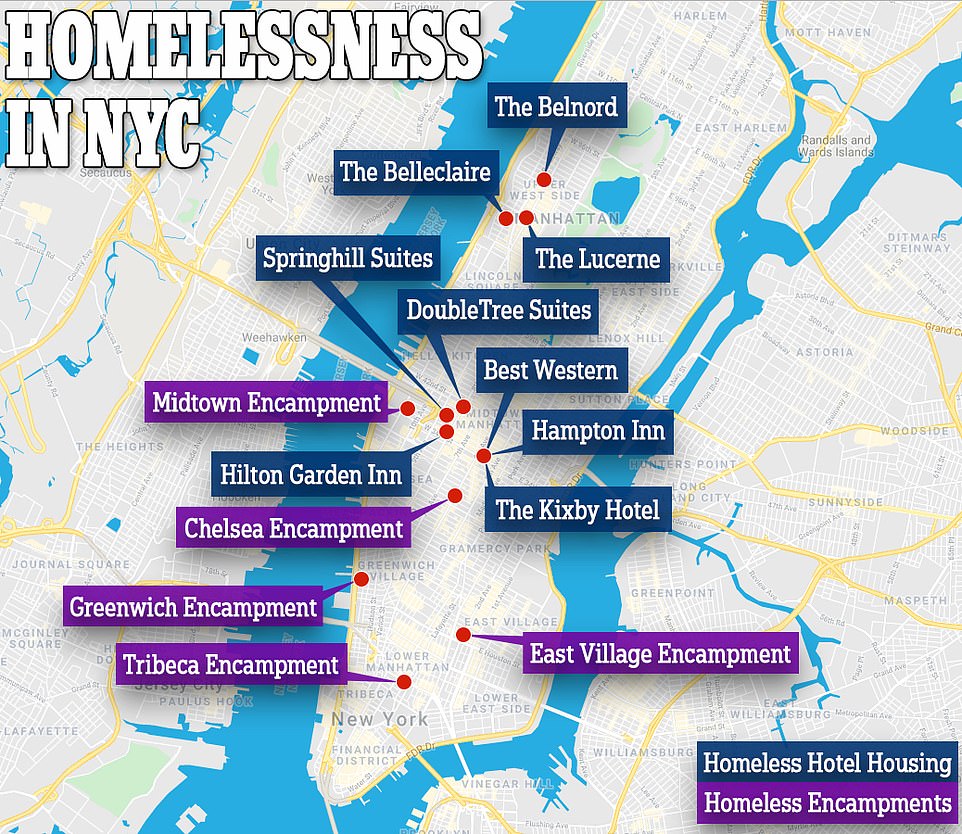 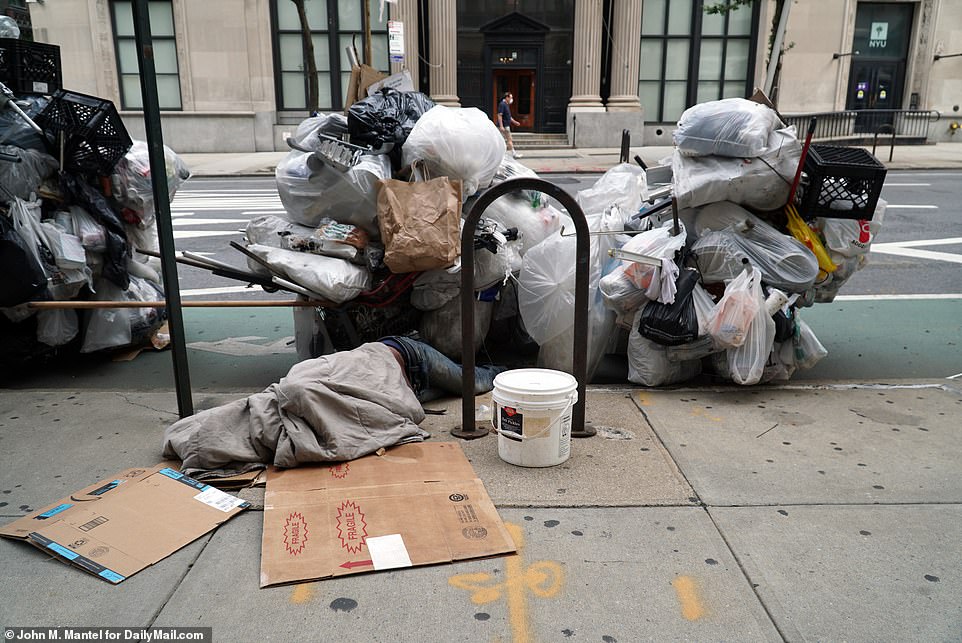 Mayor de Blasio had moved 10,000 homeless people into hotels across the city to stop COVID-19 outbreaks in shelters but many are still living out on the streets 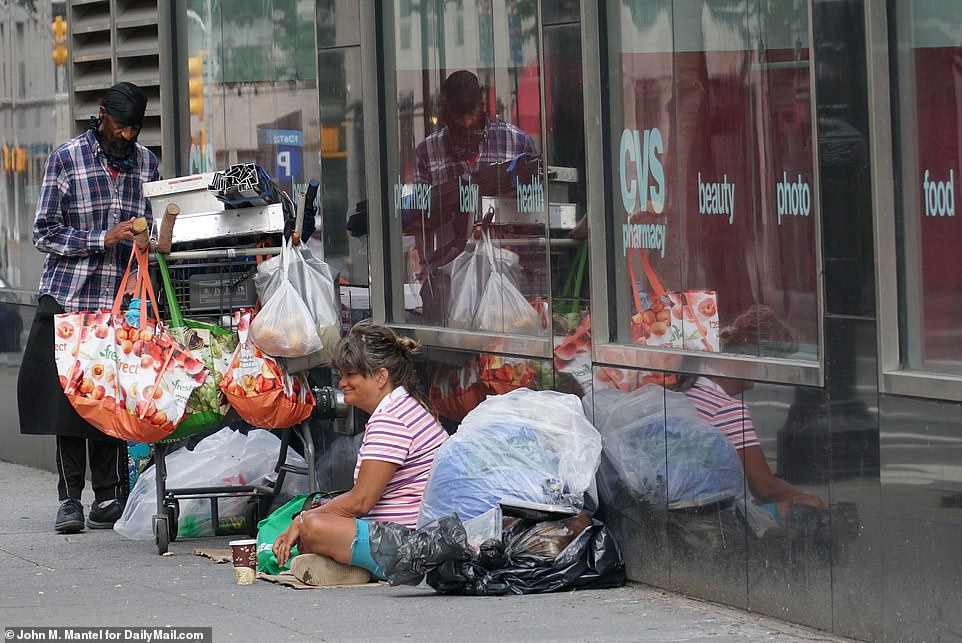 A woman who is part of New York’s homeless community, pictured in the East Village 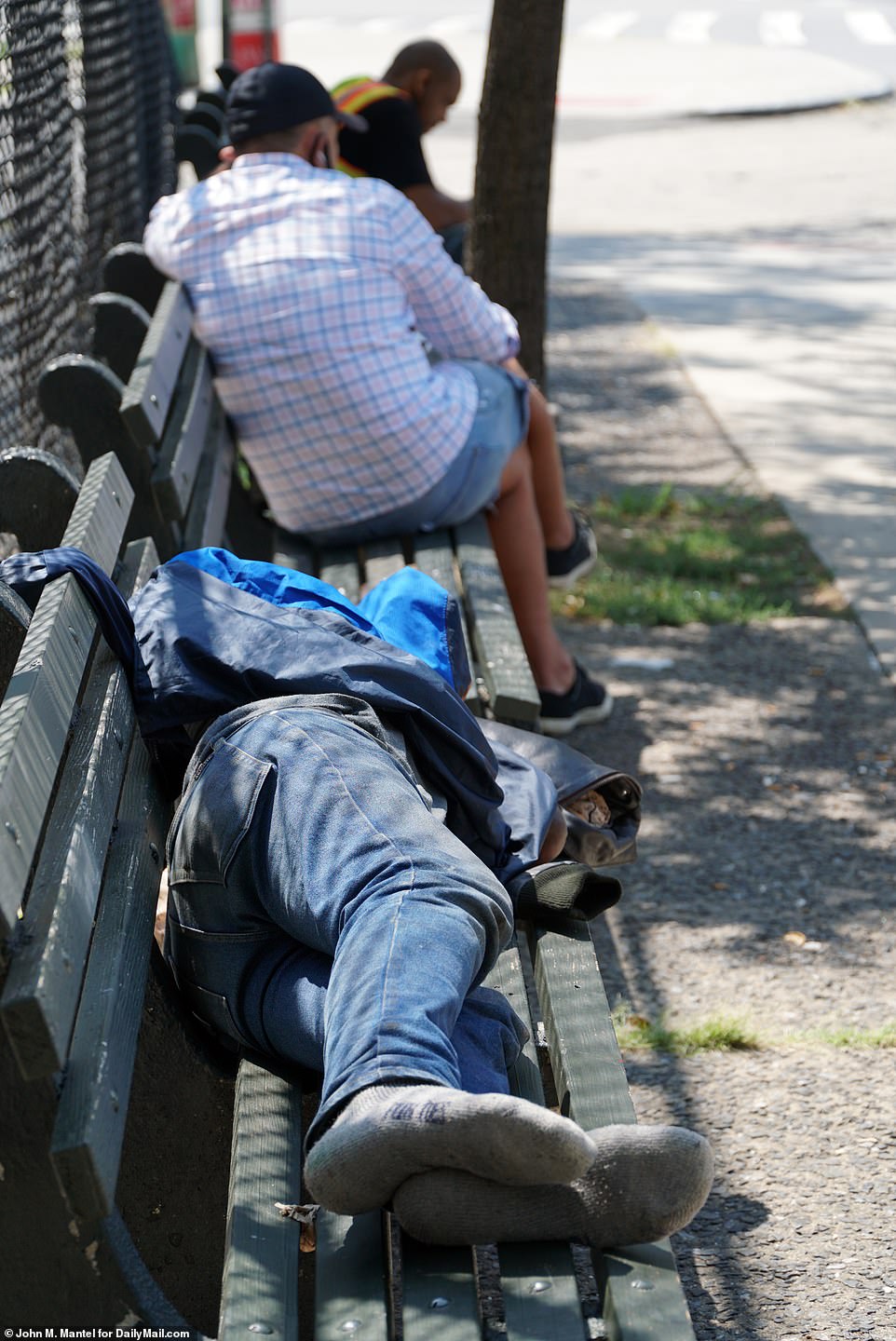 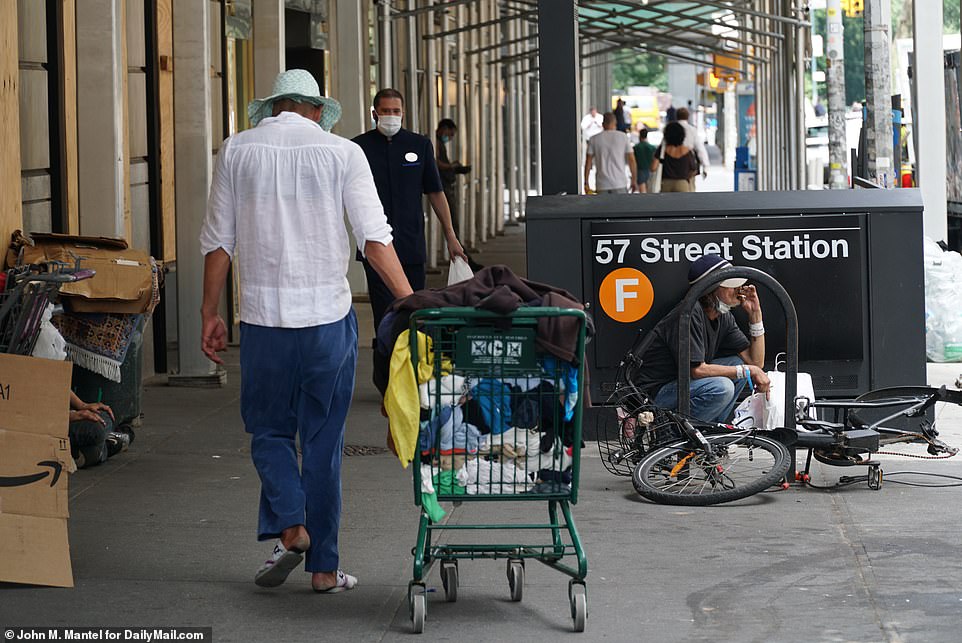 There have been complaints from locals of urinating, loitering and drug-taking by homeless people on the streets 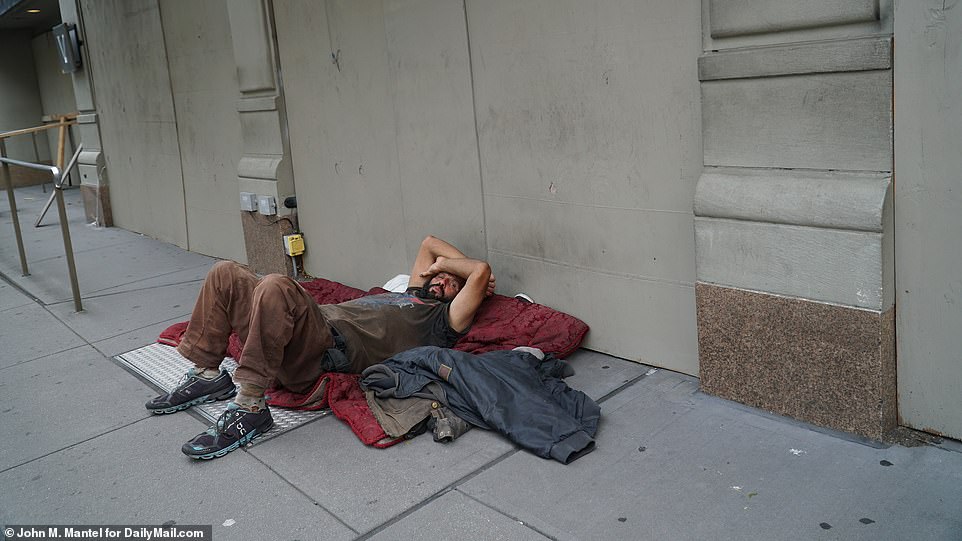 A man is pictured on Saturday, resting on the streets of the Upper West Side where hundreds of people complained 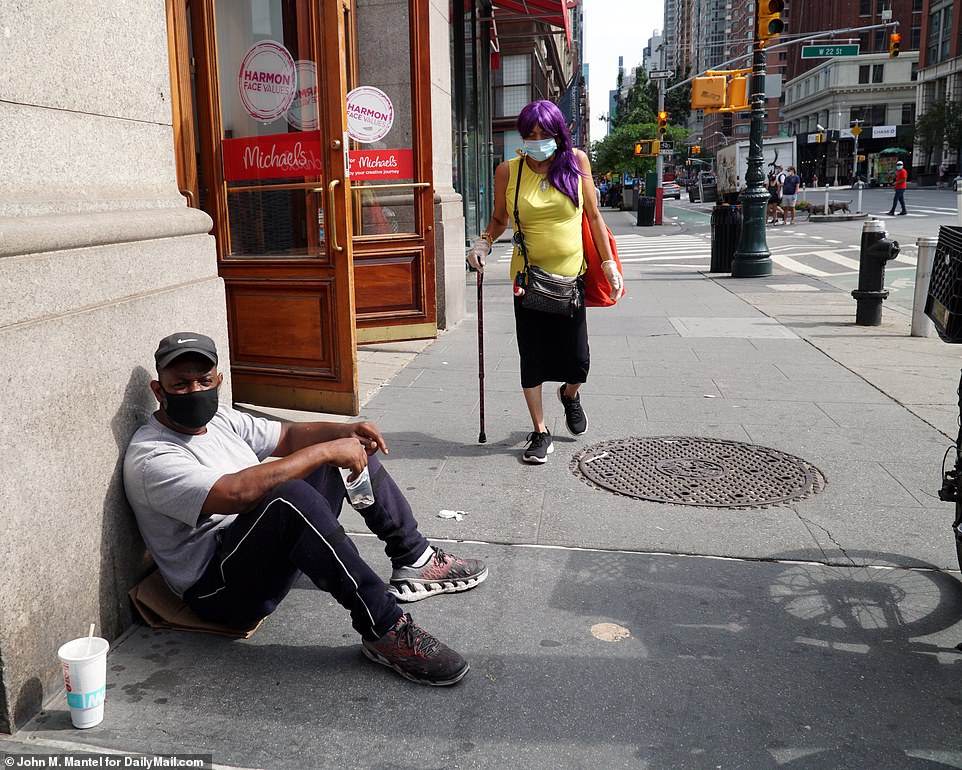 The camp of up to 20 people on West 24th and Sixth Avenue sprung up early in the pandemic. Residents and business owners complained about the mess and chaos and said it harms their livelihoods. A homeless man is pictured on 6th Ave & 22nd St

De Blasio has moved 10,000 homeless people into hotels across the city to stop COVID-19 outbreaks in shelters.

It’s costing the city some $2million a night, which they say they’ll try to reclaim from FEMA later. 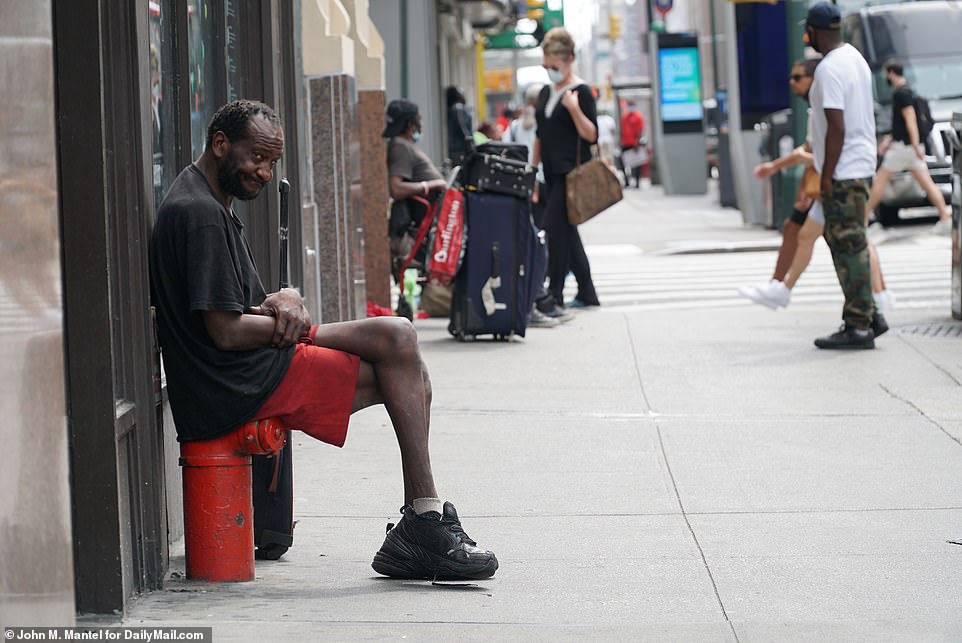 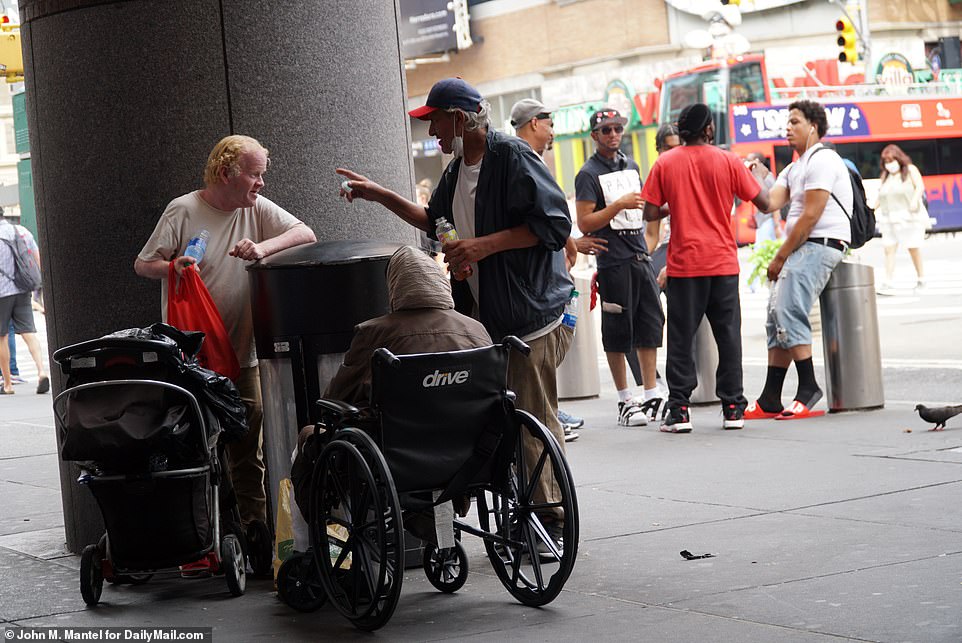 New York’s homeless community outside Port Authority on 8th Avenue. Residents have complained that crime is on the up but last month, de Blasio stripped the police force of $1billion in response to Black Lives Matter protests 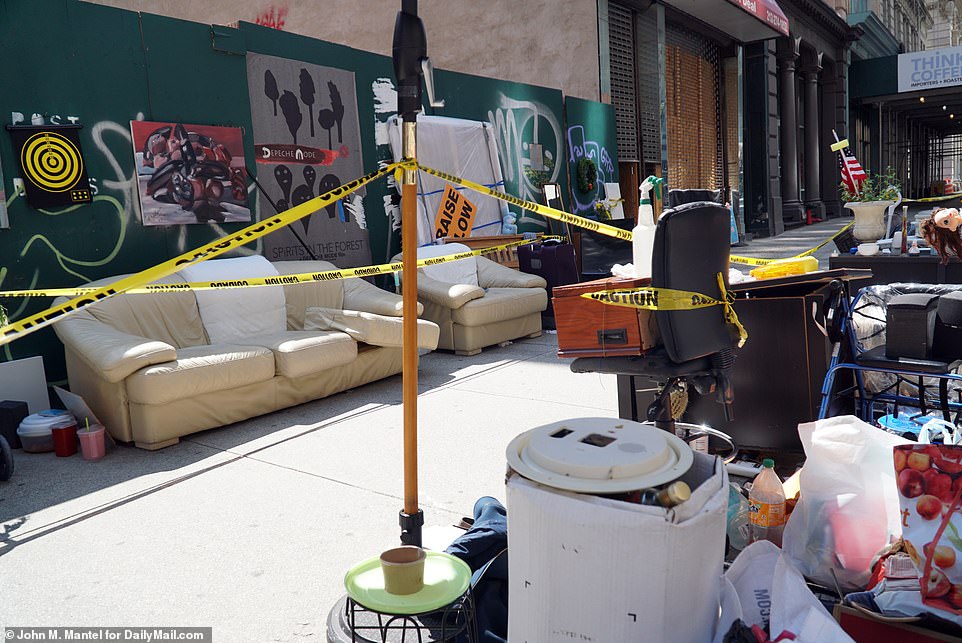 All kinds of furniture  including sofas, office chairs and even fridges can be found out on the the streets in homeless camps 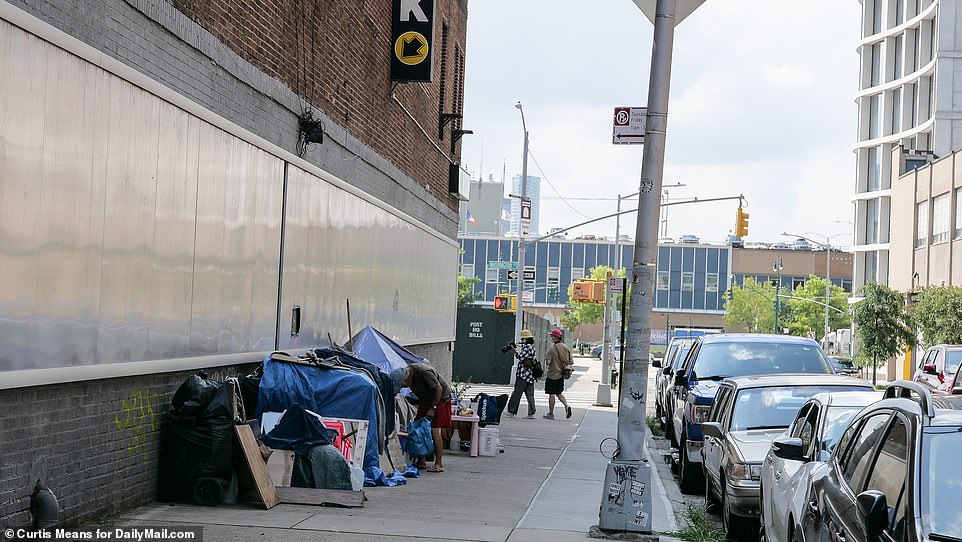 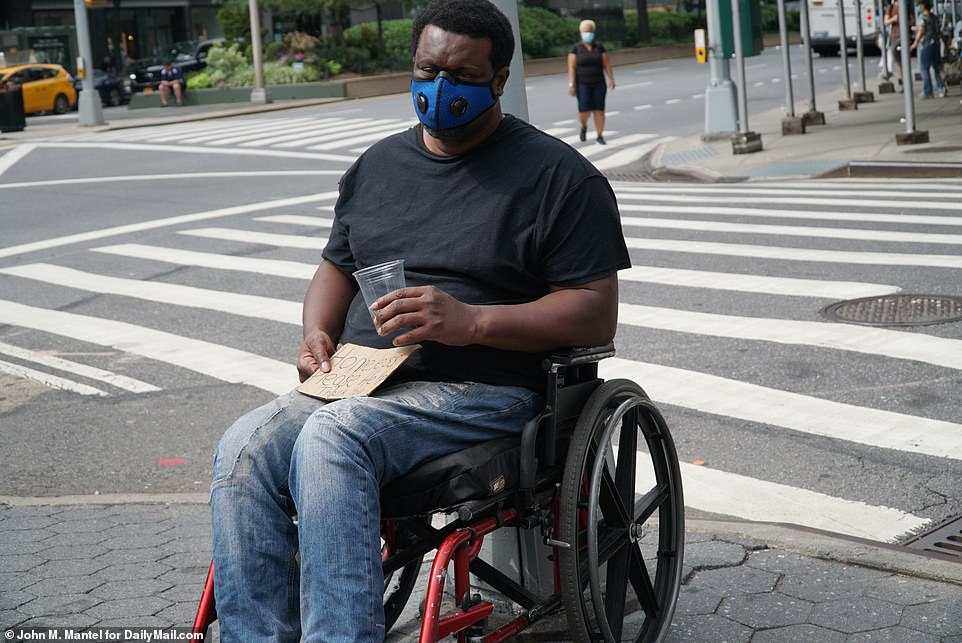 De Blasio said for the city to get homeless people out of hotels, it has to ‘identify space that will work in our existing shelters.’ 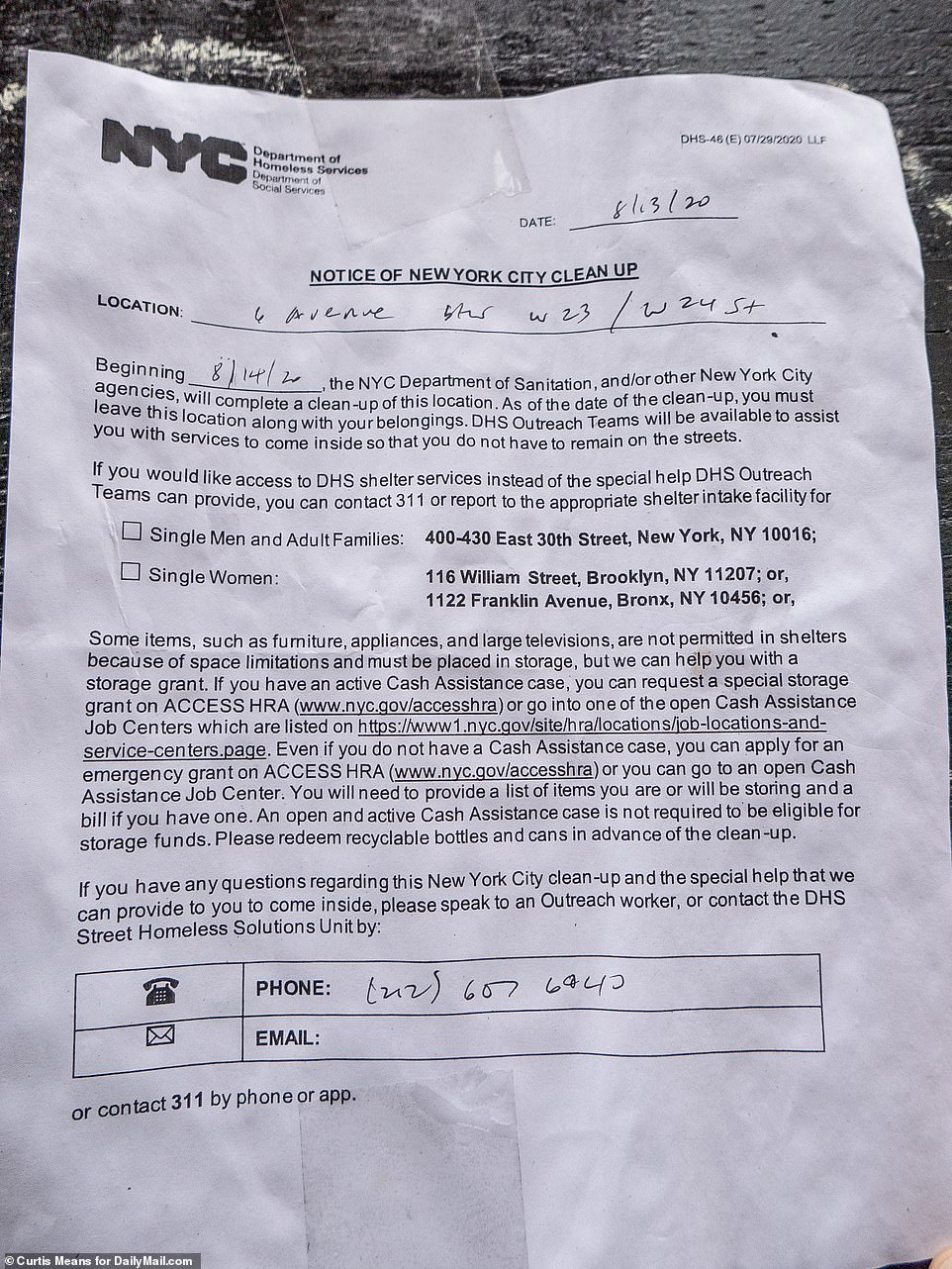 A notice shows that the city has begun a clean-up process, forcing some people to abandon their encampments