NYC is set to destroy nude sunbathing spot considered a sanctuary for gay New Yorkers, as it plans to tear down old TB hospital shielding beach from the road and build a public park

LGBTQ beachgoers are wrestling with New York City’s plan to tear down a long-abandoned tuberculosis hospital that shields a popular gay nudist beach from public view.

Fans of the People’s Beach at Jacob Riis Park in the Rockaways say the private, welcoming attitude of the tiny enclave will be put under threat if plans to demolish the old Neponsit Beach Hospital come to fruition in the coming months.

The hospital previously treated TB, but has lain empty since 1998. It now acts as a privacy shield for the People’s Beach, which is clothing optional and which is a popular spot with LGBT New Yorkers, as well as their friends.

Regulars have even taken to decorating the old hospital, with a pride progress flag and pro-LGBT slogans among those painted on the wall.

Graffiti on the outer walls declare ‘QUEER TRANS POWER’ and ‘KNOW YOUR POWER.’ Air conditioning units rust in the shattered windows of Neponsit Beach Hospital, once also a nursing home.

A shrine on the chain-link fence memorializes a queer icon found dead off the waters nearby.

The city wants to create a park on the site, wiping out the decrepit structure facing a clothing-optional beach in the borough of Queens.

And while the beach itself is not under threat, regulars fear that they’ll no longer be afforded the privacy that was once vital to a segment of society that faced widespread persecution.

The LGBTQ community has long embraced that section of Jacob Riis Park, sunbathing nude and holding gatherings such as memorials for Ms. Colombia, also known as Oswaldo Gomez, who is believed to have drowned nearby in 2018.

Novels by LGBTQ authors including Audre Lorde and Joan Nestle helped to turn the area into a fabled haven.

‘We would like to be assured that we will continue to have this space, which has always been our space, where people from the queer community always end up,’ said Victoria Cruz, 76, who has been coming to the beach since the 1960s.

‘This is the people’s beach. And we are the people,’ said Cruz, nicknamed the ‘Queen of Riis.’

Riis is accessible via bus, bike or car, and is a cheap-but-fun alternative for New Yorkers on a budget who cannot afford to visit the ritzy LGBT enclave of Fire Island, which sits off the coast of Long Island. 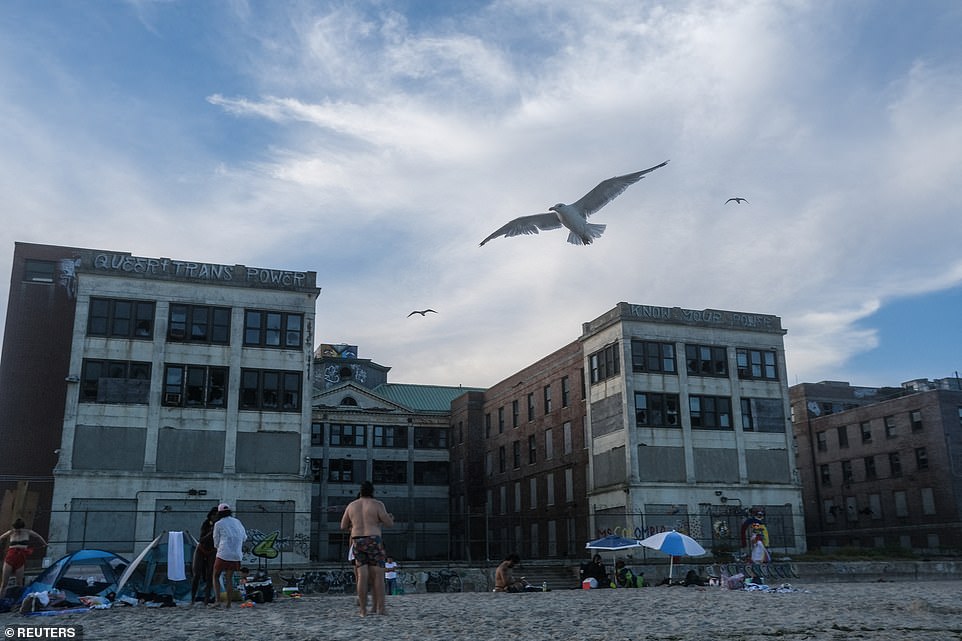 NYC plans to demolish Neponsit Beach Hospital, a former tuberculosis facility, on Jacob Riis Beach in Queens. The city wants to create a park on the site, wiping out the decrepit structure facing a clothing-optional beach in the borough of Queens 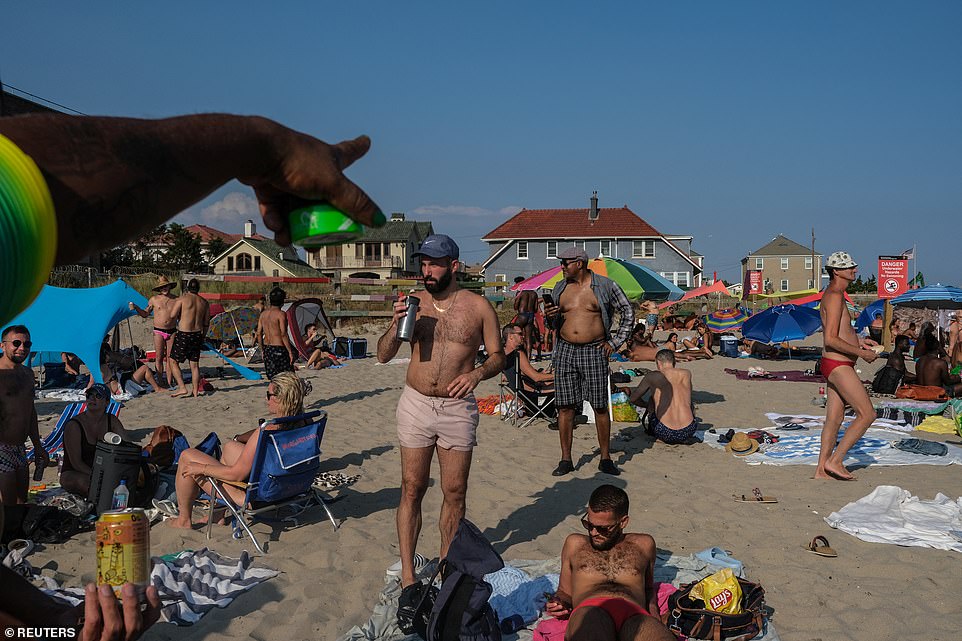 Many have becoming since the 60s and some even started visiting in their childhood and said it makes them feel ‘safe’ and ‘protected’. They fear that demolishing the hospital and building a park would change the vibe on the beach, and end its reputation as a safe and private haven for a section of society that has faced persecution 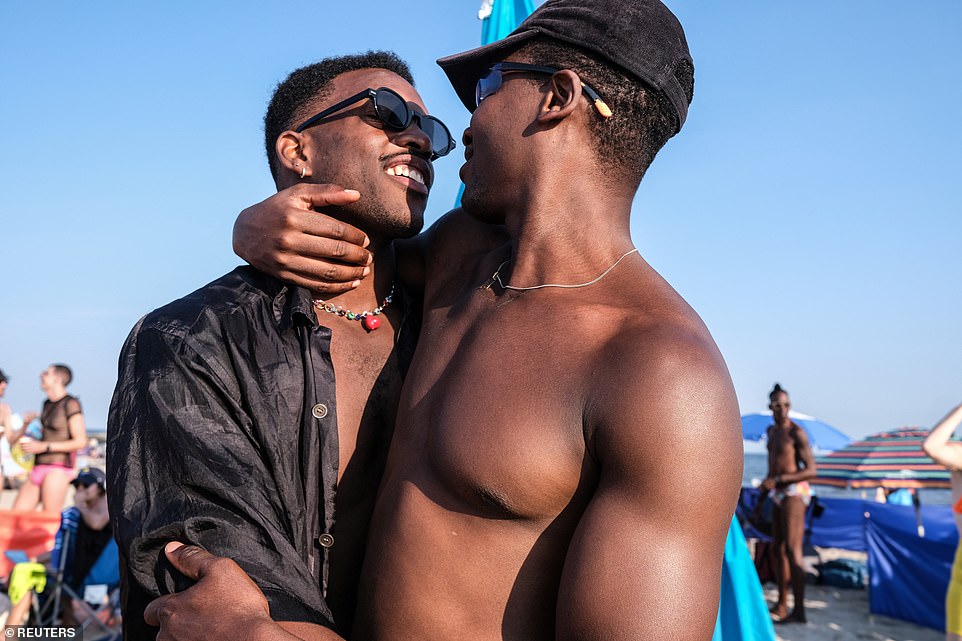 Two men lovingly gaze into each other’s eyes as they enjoyed the beach last month. One longtime beachgoer Adair Green, who goes by they/them pronouns, said: ‘You feel confident to just show up as you are’ 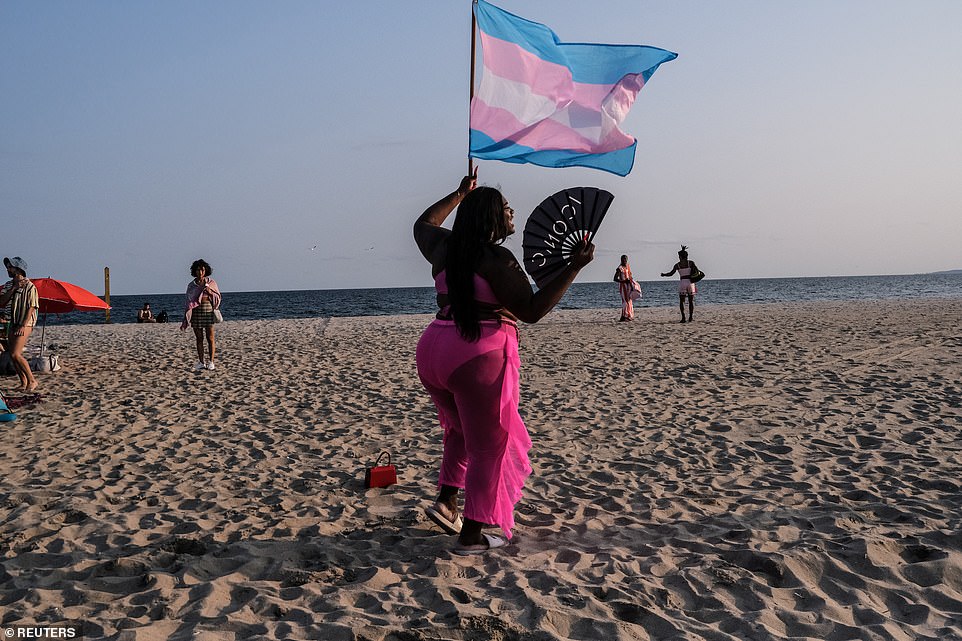 Qween Jean, a transgender activist, flies a trans flag and dances freely on the beach last month. She and others worry that the People’s Beach could change irredeemably if the abandoned hospital which shields it from public gaze is demolished 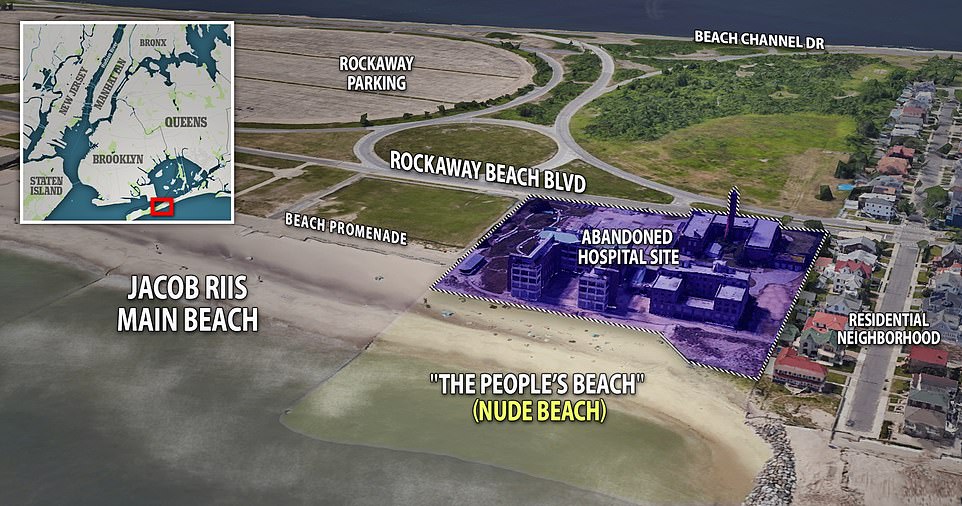 Samir Arboleda discovered the beach a decade ago while he was living in Washington Heights – from the most northern parts of Manhattan – and has since been making weekly trips to the queer haven.

‘It’s my second home,’ he told The New York Times. He said he felt calm and at peace while at laying under the summer sun and said the people at the beach made him feel that way.

Adair Green – who goes by they/them pronouns – said they felt safe at the ‘topless, gay beach oasis’ and felt supported after showing off their chest after top surgery.

‘You feel confident to just show up as you are,’ they told the Times.

Detroit-born artist Timothy French, 43, felt the same way, saying: ‘I just feel protected, and like I can have a good day and just be myself.’

The nonbinary artist said the beach feels like the safest place in the city and a place he can let his guard down.

His art projects Plastics in the City – which show Barbie tableaux across the city – was born on the People’s Beach a decade ago, when he used a few Barbies’ and a miniature pool, according to The New York Times. 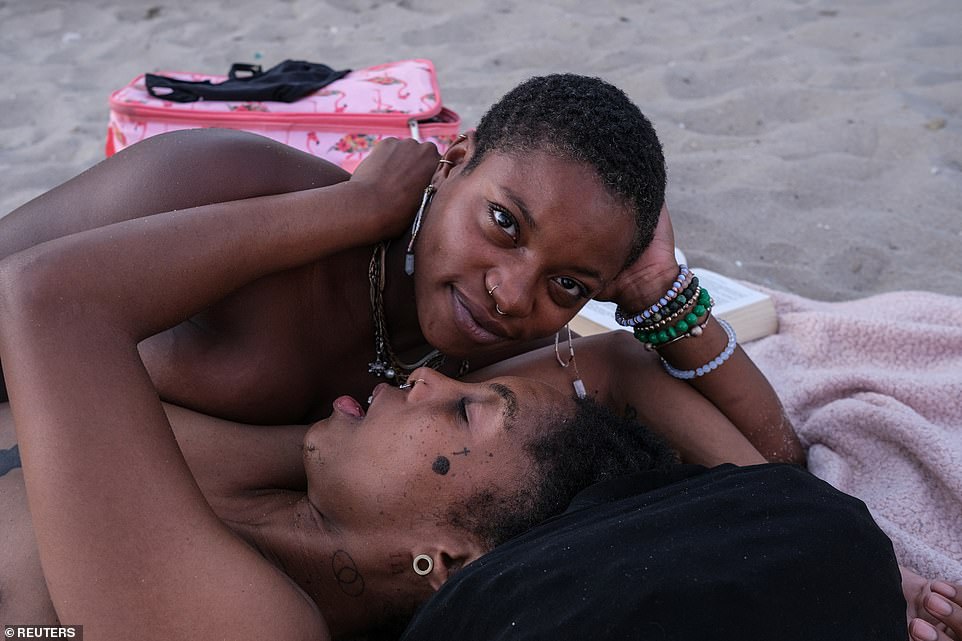 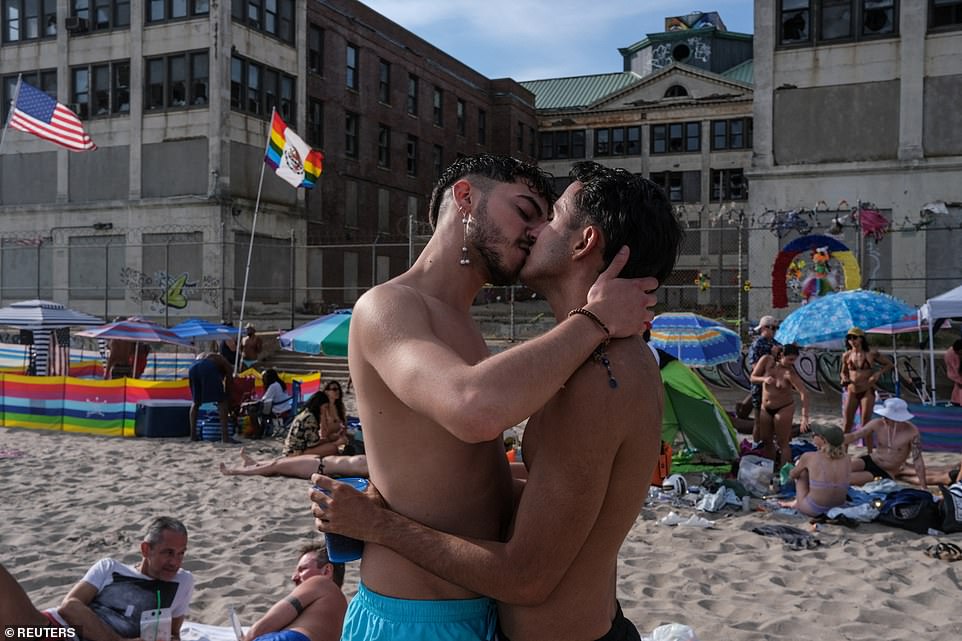 Two men (pictured) kiss as others enjoy the sandy beach. Many said the beach’s fluidity helped them come to terms with their own queerness, including Neariah Leiner, 19, who has been coming to the beach since childhood 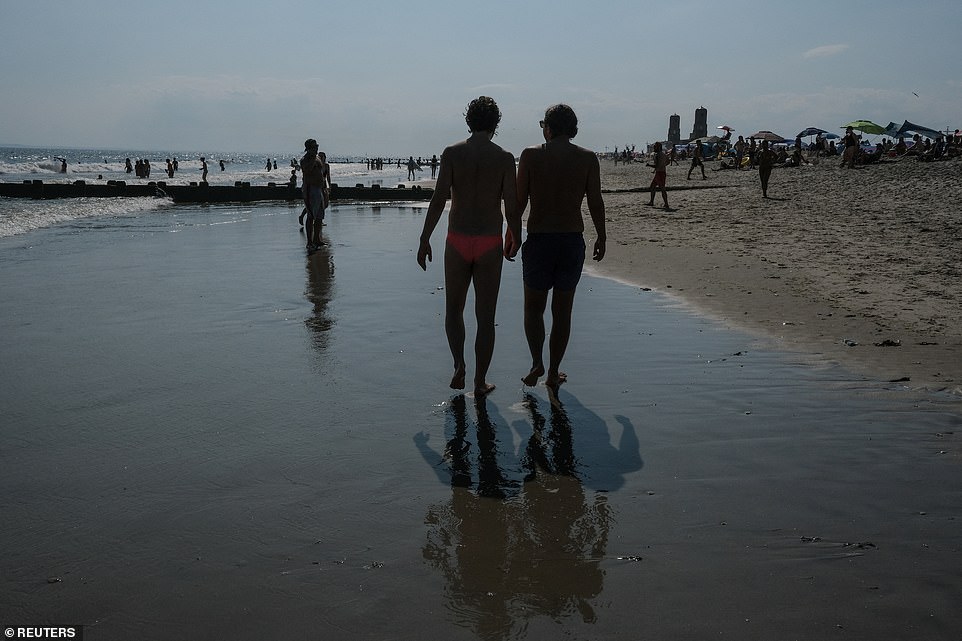 ‘It makes sense because the variety of the kinds of bodies that you’ll see at Riis Beach, it’s just not really something that you would experience anywhere else,’ Leiner said. Two men (pictured) enjoyed the water while holding hands 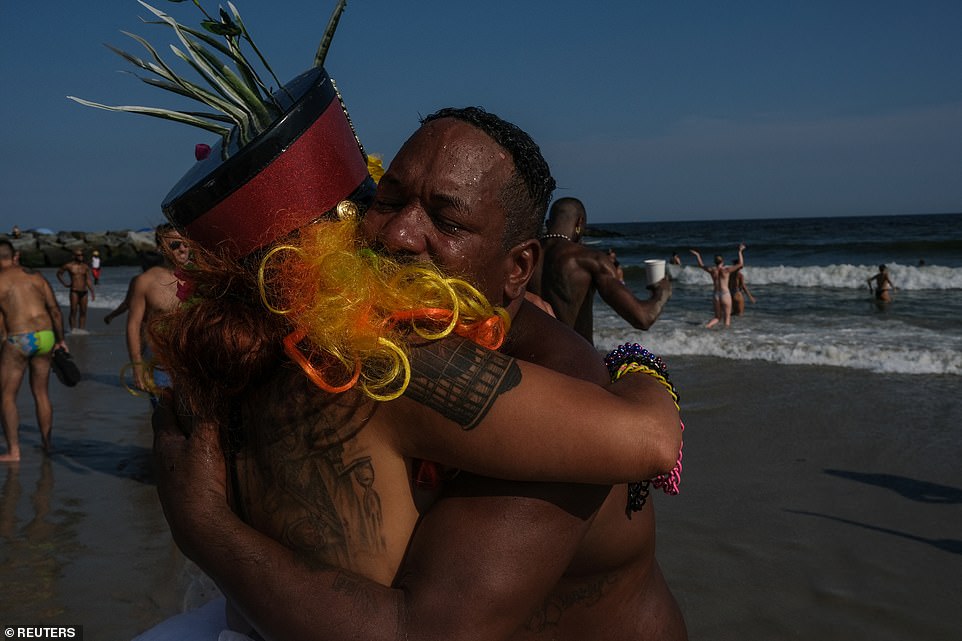 The LGBTQ community has long embraced that section of Jacob Riis Park, sunbathing nude and holding gatherings such as memorials for Ms. Colombia, also known as Oswaldo Gomez, who is believed to have drowned nearby in 2018 (pictured: a man hugs a woman dressed as Ms. Colombia)

For Neariah Leiner, 19, who has been going to the beach since childhood, the beach help her understand her queer identity and embrace nudity.

‘I think it was a really unique experience for me as a kid. I loved going to Riis so much. I would always ask to go back,’ Leiner, who goes by they/them pronouns, told the Times.

‘It makes sense because the variety of the kinds of bodies that you’ll see at Riis Beach, it’s just not really something that you would experience anywhere else.’

He has been known for his legendary end-of-summer parties since the 70s. Hopkins stopped throwing parties in the 90s, but he decided to throw one last party this summer.

He said the people at the beach ‘see’ him, even when ‘sometimes I don’t see it for myself.’

Edgar Scott has been a fan of the beach for so long that he remember when the nursing home was still operating in the 90s.

He used to visit frequently on Mondays at the time because the hairdressers would be there and they ‘always had lots of food, liquor, and all kind of stuff.’

Scott, however, has made peace with the city’s plans to destroy the hospital, saying that ‘change is one of the things that’s been inevitable in the time that I’ve lived in New York City.’

‘It’s lovely when it’s raw, but then sooner or later, modern development is going to come and put up a parking lot where trees used to be,’ he told the Times. ‘“I figured that it would just be sold off, and it would be some high-rise development that would try to push us off the beach.’

Despite the deep love for the beach by the LGBT+ community, many residents have deemed the abandoned hospital and nursing home an ugly health hazard.

‘The community is concerned about the remediation of vermin and asbestos and whatever else is in there,’ said Jenna Tipaldo, a 25-year-old PhD student who lives nearby.

The New York City Health and Hospitals Corporation, which owns the site, has met with neighbors and LGBTQ community members to discuss their concerns. 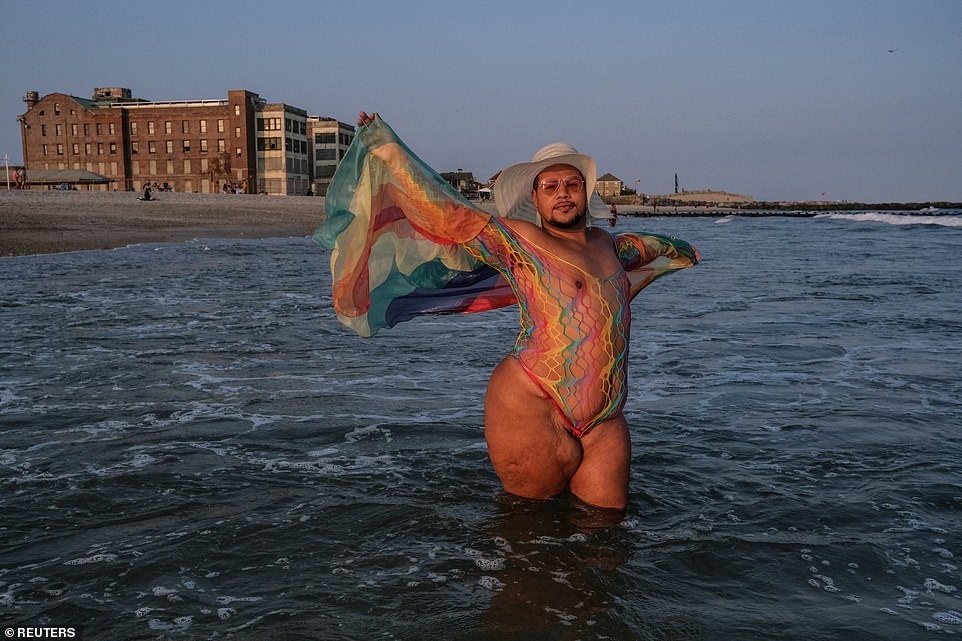 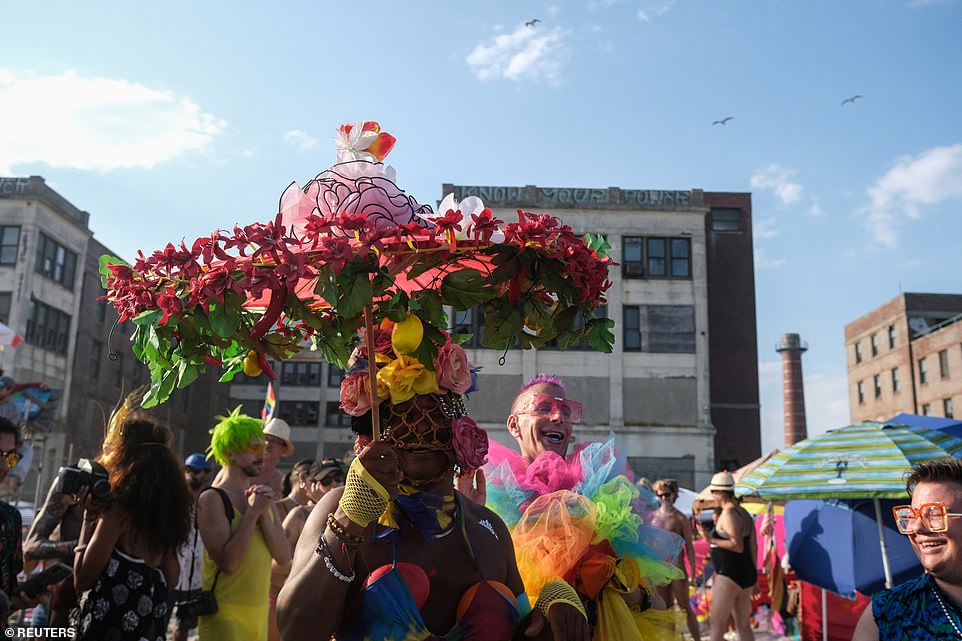 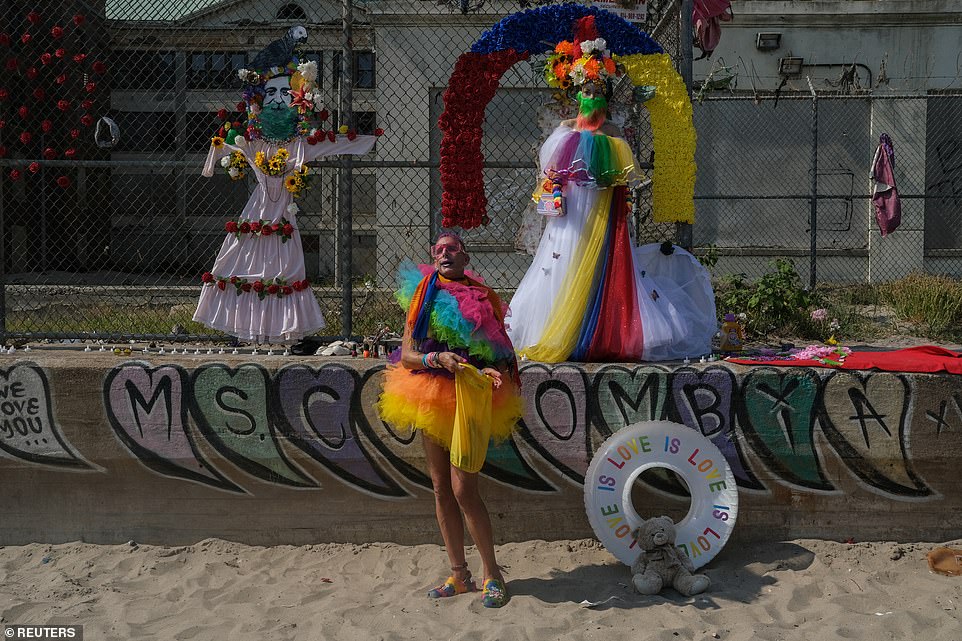 During a Ms. Colombia celebration, beachgoers dressed up in vibrant outfits to celebrate her 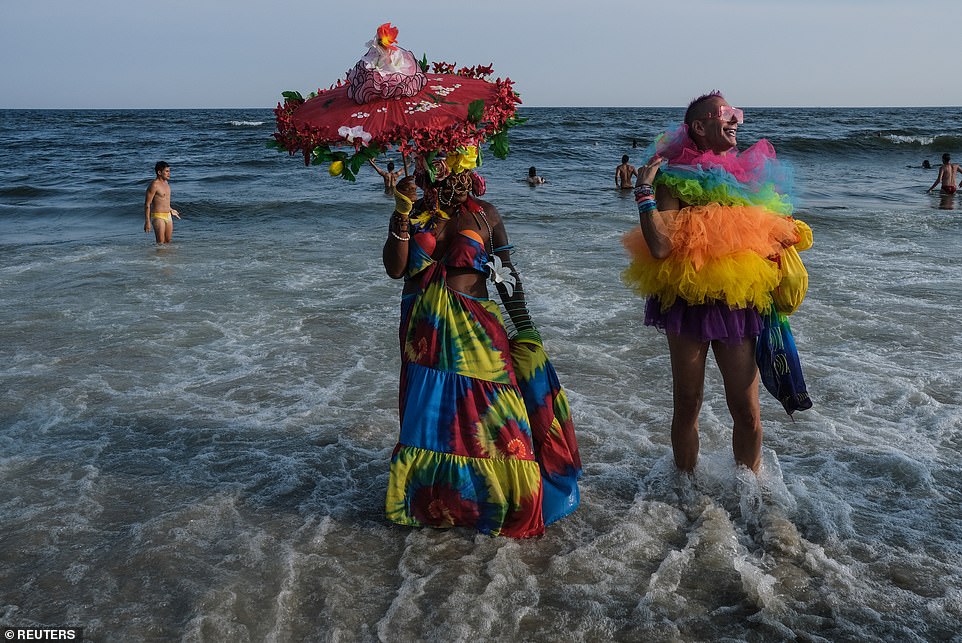 Despite the mass amounts of fun the LBGT+ community has on the beach, residents are concerned about the health hazards the old hospital could bring. The public hospitals agency has not announced what exactly it plans on building on the site, but it is reportedly supposed to be done by 2023 beach season

‘We will continue to engage these communities to learn how we can accommodate their concerns while ensuring public safety,’ Stephanie Buhle, deputy press secretary for the agency, said in an email.

The public hospitals agency has not announced specific plans for the site, and Buhle has not responded to requests for more details.

But Joann Ariola, the city councilwoman whose district includes the building, said in an email this week that a park has been proposed, and surveys and other demolition preparations are underway.

The public hospitals agency has not said when major demolition will begin, but told Reuters by email this week it aims for completion before the 2023 beach season.

Casey Morrissey, a Brooklyn-based bookseller, said they do not mind the demolition as long as the beach is not lost to the LGBTQ community.

‘It has been a sanctuary for us. We just come here without planning and always find friends,’ Morrissey said during a visit with their partner. ‘We don’t have many spaces like these.’ 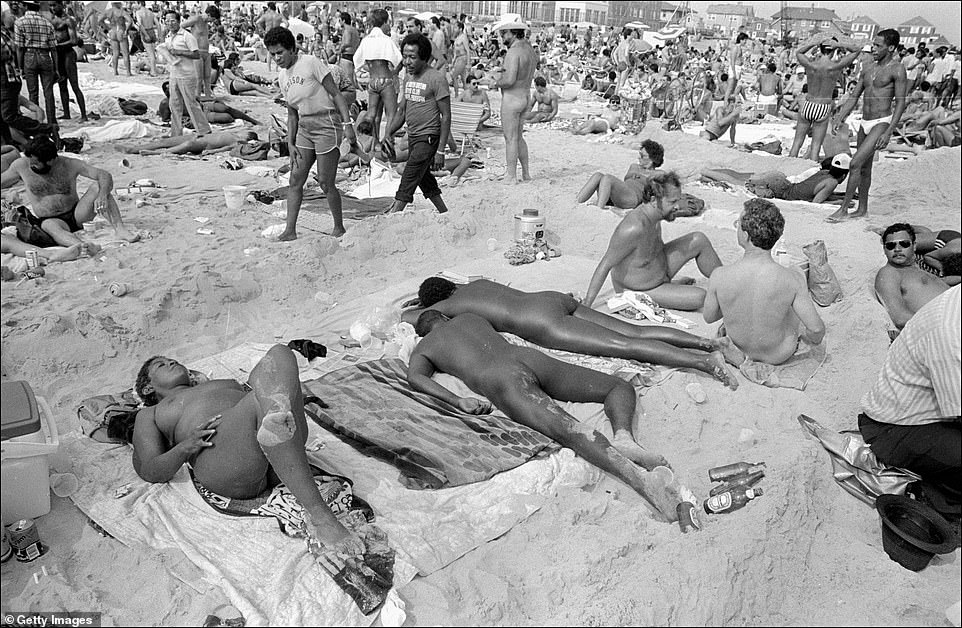 People have long embraced the nudity culture of the beach (pictured: sunbathers in August 1982) 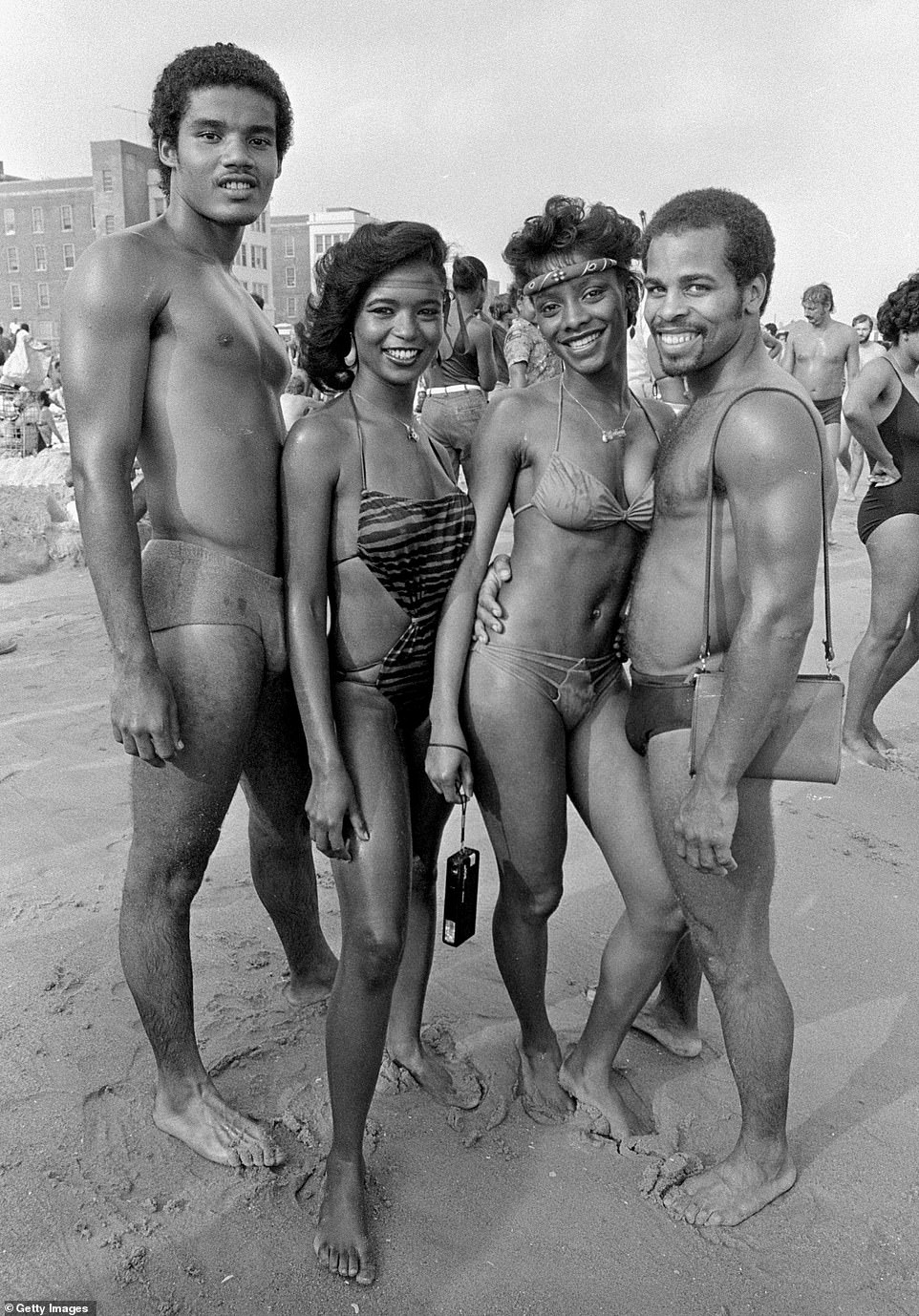 People have freely come as they are and enjoyed the beach’s open environment for many, many decades (pictured: people on the beach in August 1982)