Barack Obama was spotted playing golf in Washington DC on Tuesday, with the 44th president driving a personalized 44 golf buggy.

Obama, 59, looked focused as he took to the greens in an Under Armor golf shirt, sunglasses and golf cap.

Obama’s were custom Titleist golf balls, personalized with POTUS on one side and the number 44 on the other, which he personally paid for.

The former president, on leaving office, has had more time to get to the greens. 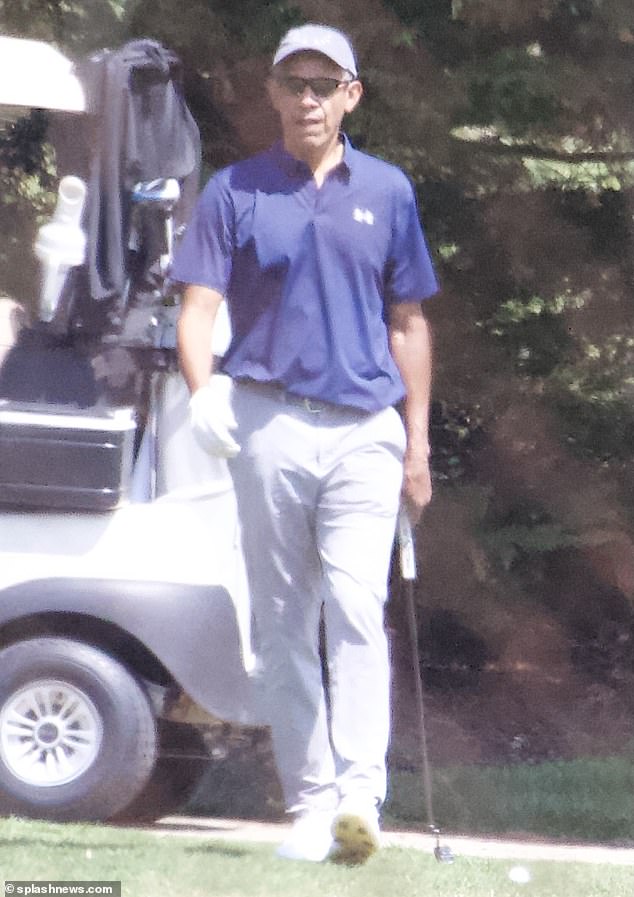 Barack Obama, 59, on Tuesday played a round of golf near Washington DC 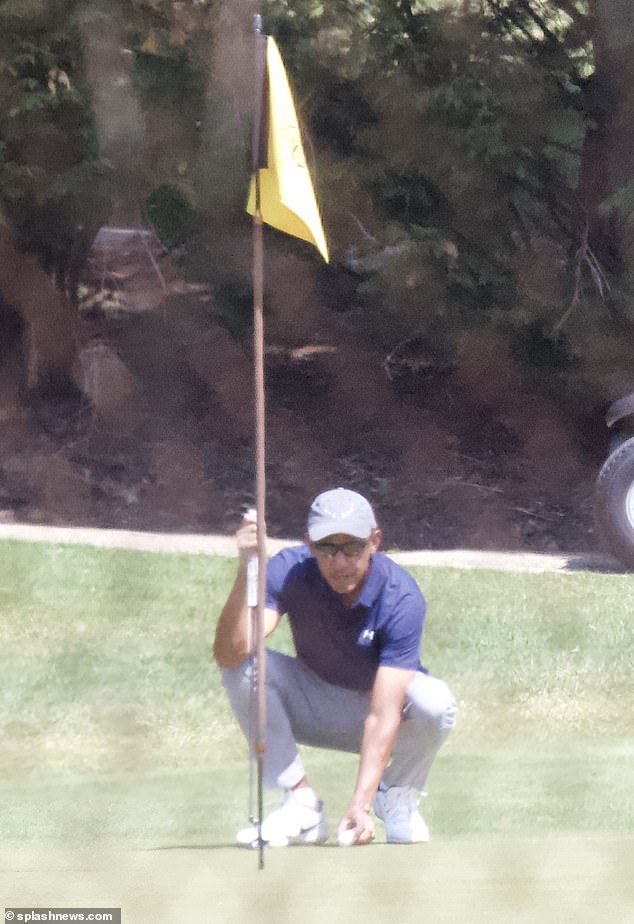 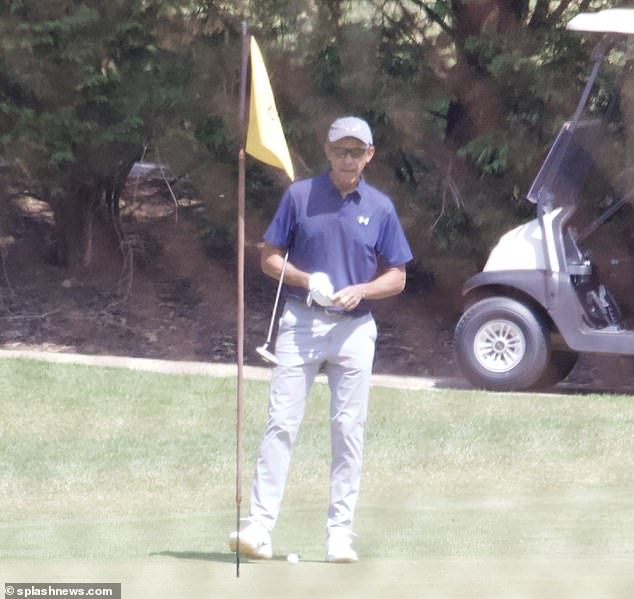 Obama played 333 rounds as president – an average of once every 8.8 days 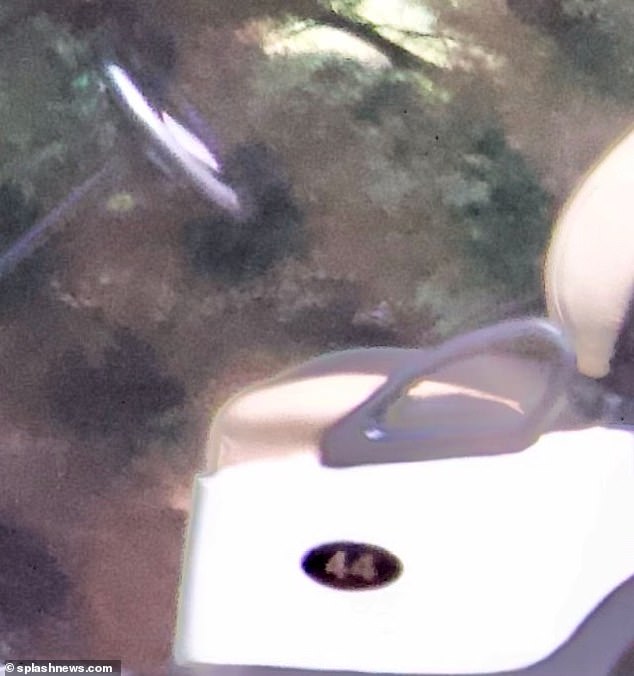 Obama, the 44th president, drove in his personalized 44 golf buggy 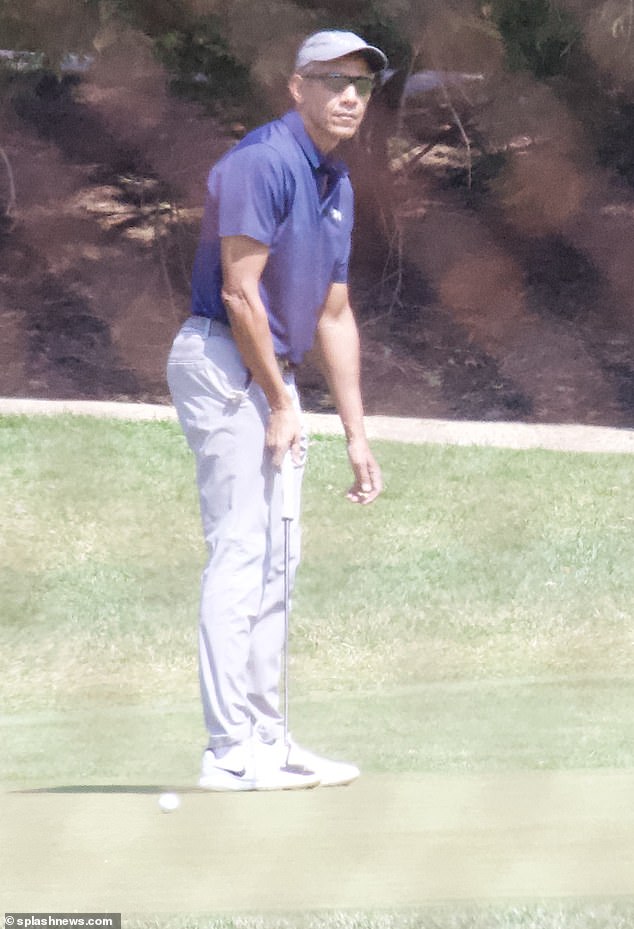 When he left the White House in 2017, Obama flew to Palm Springs to play golf 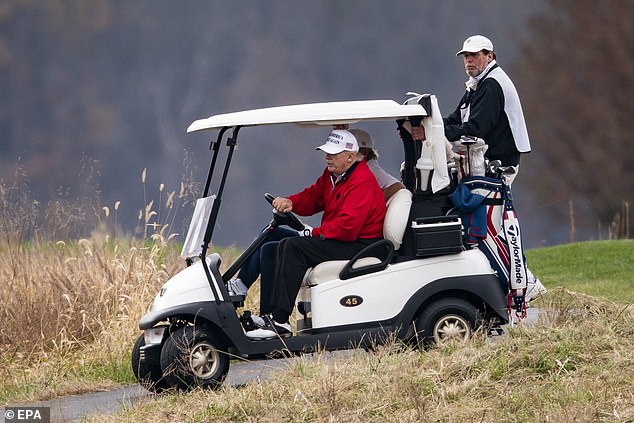 Donald Trump, seen in November, also had his own personalized 45 golf buggy

Last month Michelle Obama told Ellen DeGeneres that her husband’s love of the sport was a source of frustration, confessing that the one thing she would get rid of is his golf clubs because it ‘takes too long’ for him to play the game.

She said: ‘They’re annoying! It takes too long! Why is there a sport where there are 18 holes? They just made that up, that’s somebody trying to avoid their wife!’

Sixteen of the last 19 United States presidents played golf, according to Golf Week – only Jimmy Carter, Harry Truman and Herbert Hoover did not play.

JFK and Donald Trump were both considered the best, with handicaps in the single digits. Woodrow Wilson likely played the most, clocking in over 1,000 rounds in eight years.

While president, Obama played a total of 333 rounds over his eight years – an average of once every 8.8 days. 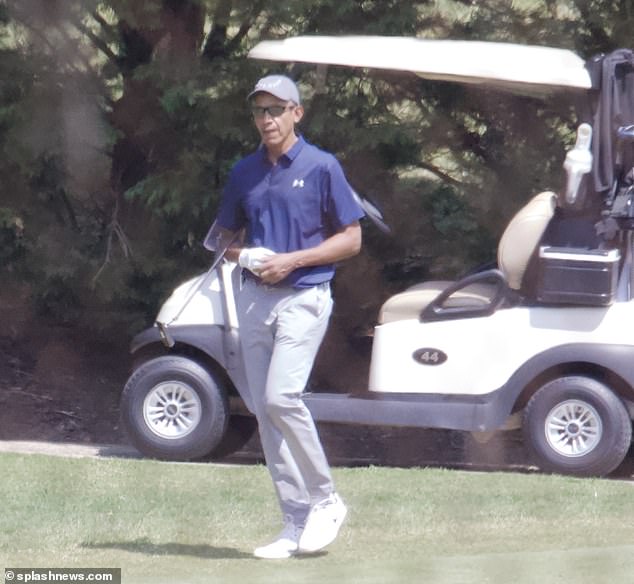 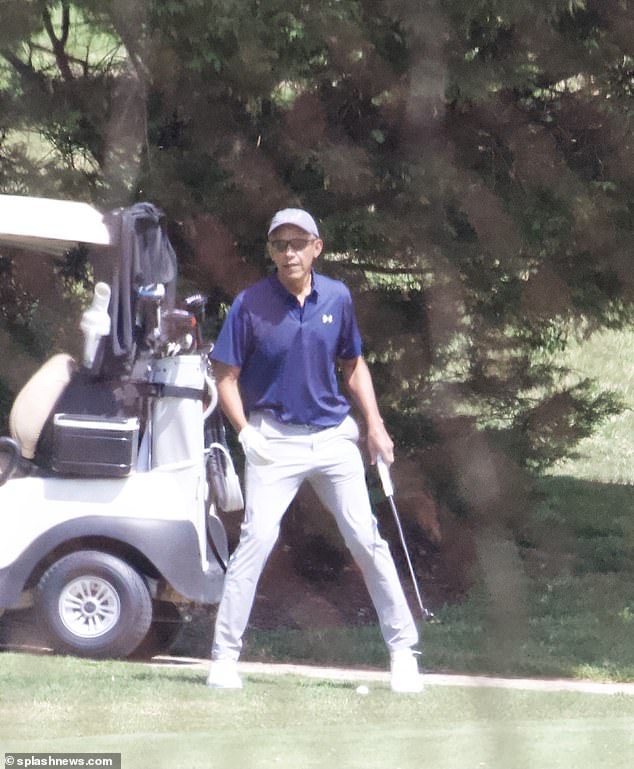 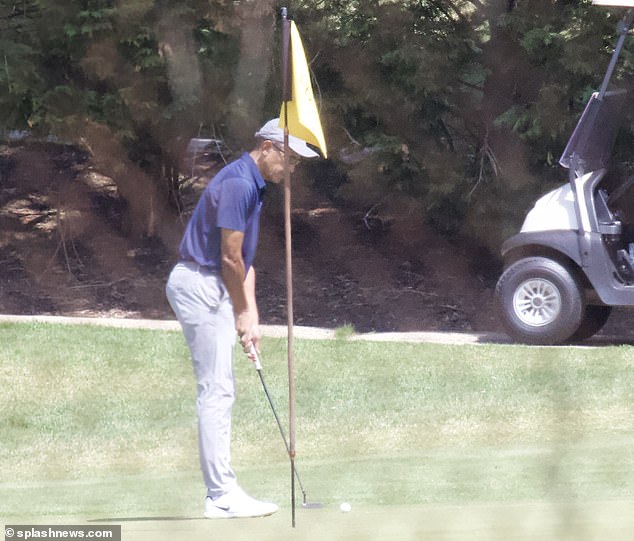 Obama on Tuesday appeared to be taking his game very seriously

Trump mocked Obama for his time on the golf course, saying in August 2016: ‘I’m going to be working for you. I’m not going to have time to go play golf.’

Yet while serving as president, Trump, according to a tally by The Washington Post, probably played 261 rounds of golf in four years – a round every 5.6 days.

In December Obama was asked by Stephen Colbert whether he had ever played a round with Trump, as he has with other former presidents.

‘Listen from what I understand he’s actually a pretty good golfer,’ said Obama.

‘I understand that shockingly enough, there are sometimes problems with the scoring and whether he’s keeping track of his strokes.’

The 74-year-old allegedly frequently cheats while playing the sport. Rick Reilly, author of Commander in Cheat, wrote a book about Trump’s cheating, speaking to some of his former colleagues and round partners.

Former PGA Tour pro Brad Faxon told Reilly that Trump even allegedly cheated during a round with Tiger Woods.

Trump has denied the allegations, telling The Washington Post: ‘I don’t drop balls, I don’t move balls. I don’t need to.’

He told PEOPLE in March 2016 that rumors of him cheating at golf were ‘disgusting.’

He added: ‘I’ve won a lot of golf tournaments.’ 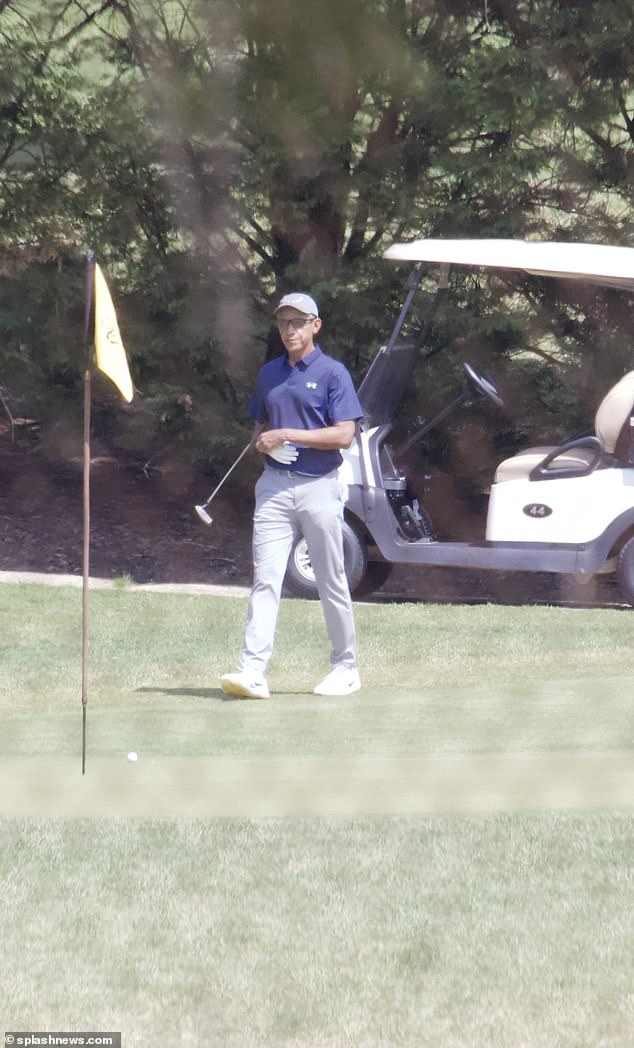 Since 1909, every president except Jimmy Carter, Harry Truman and Herbert Hoover has played 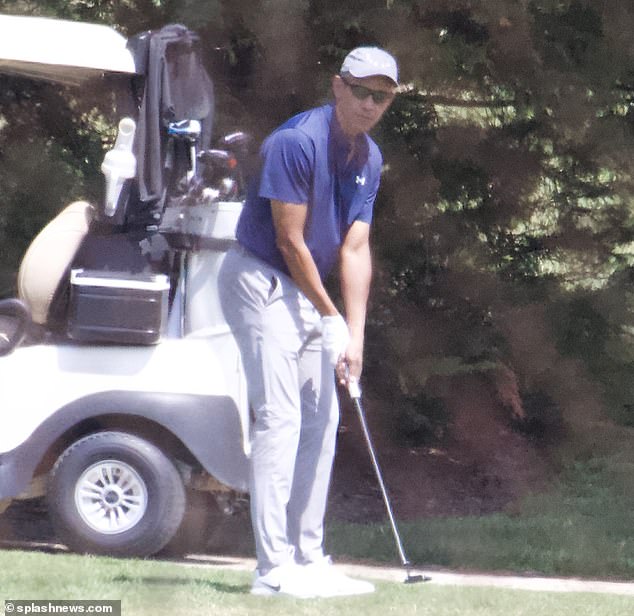 Asked in December whether he ever played with Trump, Obama laughed that Trump cheated 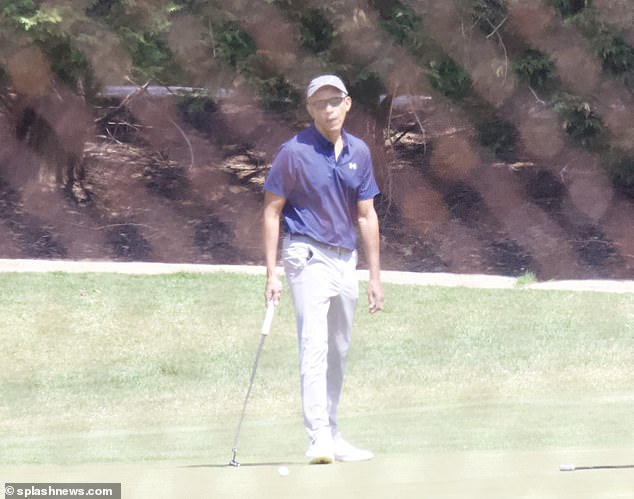