AN OHIO truck driver who shot at bystanders died as his pickup that was allegedly packed with 50 rounds of ammunition explodes.

Cops were initially called at 11.35am to reports of shots being fired at a woman in a Kroger parking lot on Monday. 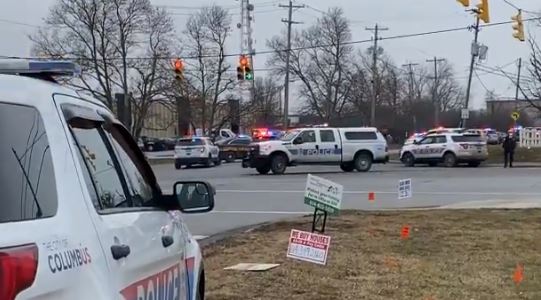 Just 30 minutes later, additional calls were received claiming there were shots fired in different areas across the West Side.

Each call detailed a similar suspect – a white man in his early or mid-20s, driving a red Dodge Ram pickup truck.

Around 12.26pm, cops spotted the man and tried to pull him over, but he ran a red light just two minutes later.

By 12.29pm, the truck has reportedly crashed and flipped over at lead once, setting itself on fire.

The suspect was still inside of the vehicle, with "multiple firearms visible," cops told the Columbus Dispatch.

The man was reportedly armed with a long-barreled shotgun and at least 50 rounds of ammunition, according to an ABC reporter.

Reports claimed that the truck exploded at least twice, and the man is not believed to have survived.

No injuries from gunfire have yet been reported.