A feisty cat in China has been filmed having a scuffle with her worst enemy – her reflection in the mirror.

The two-year-old British shorthair, named Qian Wan or ‘Hundreds of Thousands’, suddenly became hostile after seeing herself in the reflector for the first time.

Footage shows the feline hissing and scratching the furniture belligerently, trying to fight her own reflection. 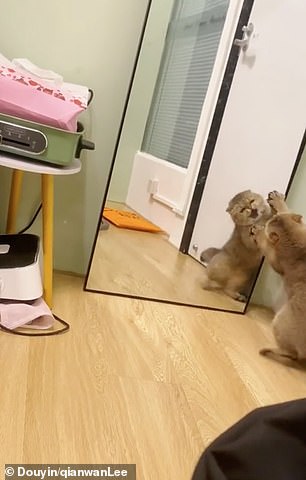 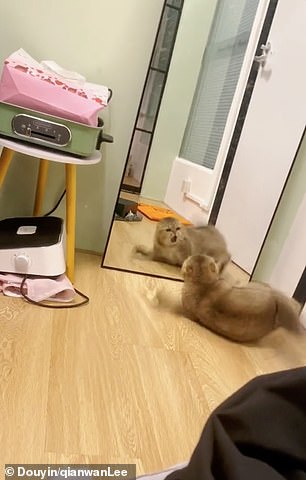 A feisty cat in China, named Qian Wan or ‘Hundreds of Thousands’, has been captured on camera having a scuffle with her own worst enemy – her reflection in the mirror

The clip was recently shared by her owner, known by her surname Deng, on Douyin, the Chinese equivalent of TikTok.

In the viral video, the British shorthair first appeared stunned as she stared at herself in the mirror.

She then became aggressive and started hissing before launching a full-on attack at the reflector.

The pet owner is seen rushing to hold the mirror as it started toppling over. She shouted at the feline: ‘Hey, hey, that’s enough.’

Ms Deng, 27, told MailOnline that the footage was captured when Qian Wan saw herself in the reflector for the first time.

Since then, the feline would fight her reflection whenever she walked past the mirror.

‘[She] gets very jealous,’ the pet owner from southern Chinese metropolis Guangzhou said. 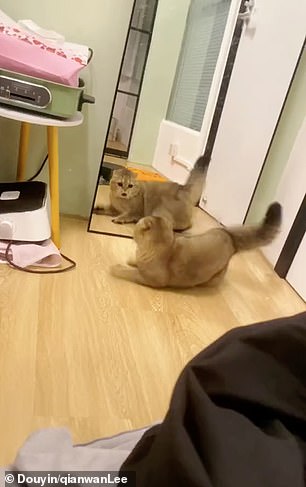 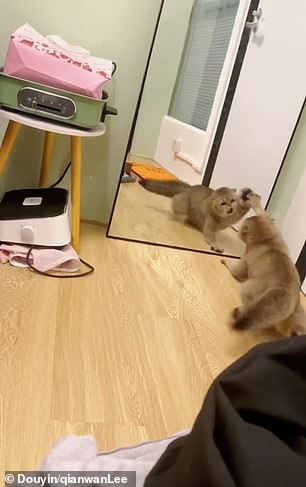 The two-year-old British shorthair living in Guangzhou, named Qian Wan or ‘Hundreds of Thousands’, suddenly became hostile after seeing herself in the mirror for the first time

‘She can’t stand being with other cats and often attack them. She also gets into fights with dogs,’ Ms Deng added.

To prevent the family cat from getting angry at her reflection, the pet owner is forced to turn the mirror facing the wall when it’s not being used.

‘I tried putting the mirror in the bedroom and forbade her from entering the room. But it wouldn’t work,’ Ms Deng said.

‘She is so curious that she would try everything to come in when she’s not allowed to do so.’

The pet owner said she named her cat ‘Hundreds of Thousands’ in the hope that she would make a handsome profit from the business she has with her husband. 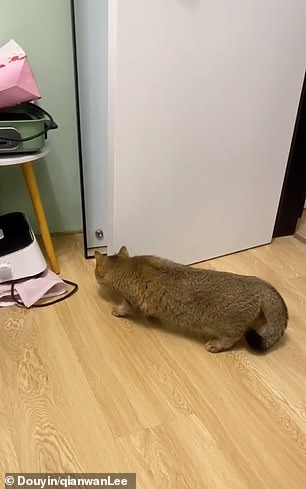 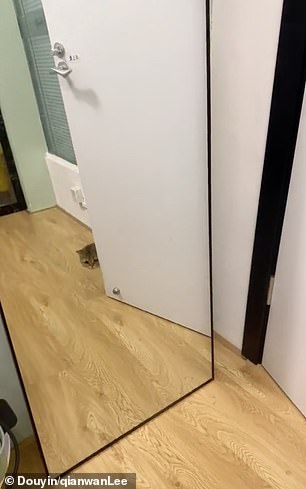 The clip was recently shared by her owner, known by her surname Deng, on Douyin, the Chinese equivalent of TikTok Millions of web users were amused by the cat’s funny reaction

Millions of social media users were amused by the cat’s funny reaction as the footage became viral.

One commenter wrote: ‘Qian Wan seems to have gone mad because of herself! Look how upset she got.’

Another one replied: ‘What a feisty cat! But her opponent is pretty tough as well.’

The viral video comes as another pet owner in China has captured the ultimate guilty face of his husky after the hound was caught tearing up his leather sofa.

The Chinese man was shocked to find the wreckage of his couch with shredded yellow foam scattered around his living room as he returned home.

While going through his security camera footage, the pet owner spotted his naughty Husky, nicknamed Oreo, dragging the furniture with its teeth and tearing up the covers.