Hunt for the jewellery thieves: Police release CCTV of man and woman after bag containing £15,000 of diamond rings was swiped from jewellers

Police have released a CCTV image in the hunt for thieves who stole a bag containing £15,000 of diamond rings from a jewellers.

Detectives launched a probe after a bag of rings worth £14,820 was swiped from a  store in Bournemouth, Dorset, on July 26.

A man and woman had entered the shop to try on some rings. After they left, a worker noticed a bag of rings had been taken.

Police have since released a CCTV image of two people they wish to speak to in connection with the incident at Samuel James Jewellers at 2.15pm.

The male suspect is wearing ripped jeans and a black jacket while the woman is dressed in a black coat and lighter coloured jeans. Both of them are wearing satchel-like bags in the photo. 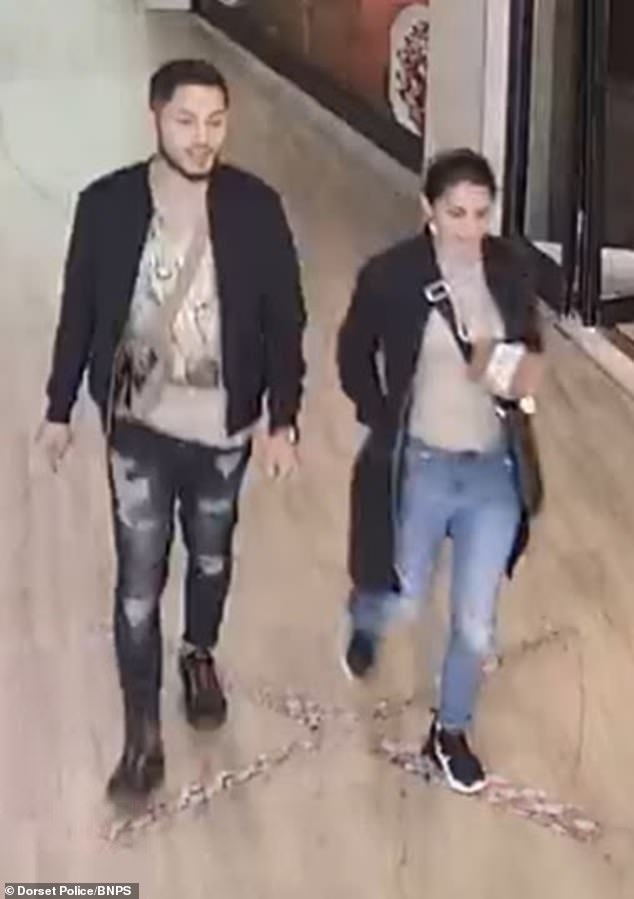 Police have released the CCTV image above after the high-vale theft at Samuel James Jewellers in Bournemouth, Dorset

Police Constable Heidi Nielsen, of Bournemouth police, said: ‘Since the incident was reported, I have made a number of enquiries and am now in a position to release an image of two people I would like to identify.

‘I am appealing for anyone who recognises them to please come forward.’

It comes after a damning report found how the vast majority of burglary victims – as well as those targeting by thieves and robbers – are being let down by the police.

Officers are ‘missing opportunities’ to catch suspects from the moment crimes are reported, the report concludes.

Although recorded crime hit a 20-year high in 2022 but the charge rate has plummeted to a new low.

Fewer than 5.6 per cent of offences resulted in a charge and/or summons outcome this year compared to 7.1 per cent in 2021.

The low charging rates are ‘unacceptable and unsustainable’, according to a devastating audit by Her Majesty’s Inspectorate of Constabulary.

Its bombshell review comes amid increasing concern that police are putting too much focus on ‘woke’ issues and not enough on crimes that shatter people’s lives.

Some forces can take six months to return fingerprint identifications, which can rule out prosecutions in magistrates’ courts due to statutory time limits – rendering an entire investigation useless.

Inspectors found that in 71 per cent of burglary reports, call handlers failed to give victims any advice on crime scene preservation – meaning vital forensic evidence could be lost.

However although levels  of robbery were up 15 per cent year on year they remain below pre-pandemic levels.