London: The Queen is considering appointing a diversity chief, it has emerged, as Buckingham Palace aides acknowledge they are not “getting the results they should” on minority representation.

The Palace has drawn up plans to “seek independent views” on how to improve its approach to diversity, including towards ethnic minorities, disabled people as well as the gay and trans communities.

The news comes after the Duchess and Duke of Sussex alleged in their recent interview with Oprah Winfrey that a member of the royal family had raised “concerns” about how dark the skin of their son Archie Mountbatten-Windsor would be. 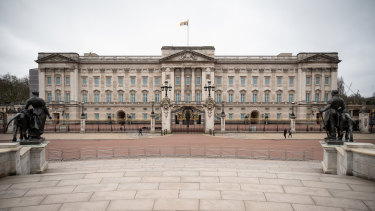 A handful of pedestrians and tourists walk past Buckingham Palace on the day that Queen Elizabeth II is set to move to Windsor Palace in a bid to avoid the COVID-19 coronavirus pandemic in London, England. Credit:Getty

The couple refused to name the member who allegedly made the remarks, but Winfrey later revealed Prince Harry told her it was neither the Queen nor her husband the Duke of Edinburgh, Prince Philip.

The Telegraph understands the Palace’s plans to improve diversity, which were first reported in the Mail on Sunday, have been in train since before the Oprah interview.

A royal source said: “This is an issue which has been taken very seriously across the royal households. We have the policies, the procedures and programmes in place but we haven’t seen the progress we would like and accept more needs to be done, we can always improve.

“Therefore we are not afraid to look at new ways of approaching it. The work to do this has been underway for some time now and comes with the full support of the family.”

Commenting on the potential appointment of a diversity chief, the source added: “It is something that has to be considered but it is too early for any firm plans to be announced. We are listening and learning, to get this right.”

Following the Oprah interview, the royal family released a statement saying it took the Sussexes’ accusations “very seriously”, but that “recollections may vary” on the alleged conversation about skin tone.

The royal aide said that while much of the Palace’s diversity work pre-dates the Oprah Winfrey interview, the couple’s comments will be taken on board as part of the process. Senior palace staff are understood to have had an HR briefing on the plans just last week.

“A lot of these actions have been underway for some time but there is an awareness that we are not doing as well as we would like on diversity,” one source said. “This is obviously an area where members of the royal family have a strong track record in terms of their work, including through their charities. And we are seeking out independent views to help us assess and improve our approach.

“We take a broad view on diversity, this includes LGBTQI+ and disability representation as well.”

Meanwhile, this week Gayle King, a US TV anchor and friend of Prince Harry and his wife Meghan, revealed that the couple had been left frustrated that their allegations of racism had dominated coverage of the Oprah interview.

She said: “I think it’s frustrating for them to see that it’s a racial conversation about the Royal family when all they wanted all along was for the royals to intervene and tell the press to stop with the unfair, inaccurate, false stories that definitely have a racial slant.”