We ARE going back to the office: Two-thirds of workers have returned to their desks, claims Grant Shapps – but rail ticket sales are still down 85% for first half of year compared to 2019

Ministers said today that two-thirds of workers have returned to offices across the UK while rail ticket sales slumped by 85 per cent on last year.

Transport Secretary Grant Shapps made the announcement to the House amid reports that officials are gearing up for a second round of economic carnage by planning curfews and even a second national lockdown.

Meanwhile rail ticket app Trainline revealed that ticket sales fell to £67million in the first quarter of 2020, while second quarter sales were still 22 per cent of 2019 levels.

Critics are now blasting talk of imposing even tougher coronavirus restrictions as economists show the Government’s work from home policy has been extremely damaging, with public debt at an all-time high of £2trillion – and counting.

In a sign that the Government is preparing to lock the public away again, Health Minister Edward Argar today failed to rule out a return to compulsory working from home in England as coronavirus case numbers continue to increase.

Mr Shapps told the Commons: ‘I can report to the House some numbers which might be helpful overall and say that 62 per cent of workers across the country are now going back to work – that’s the highest level since the crisis began.

‘And in particular on National Rail, the figure for the week commencing September 7 was 42 per cent back on our National Rail services.’

‘In terms of non-London buses, ridership has gone back up to 58 per cent.’ 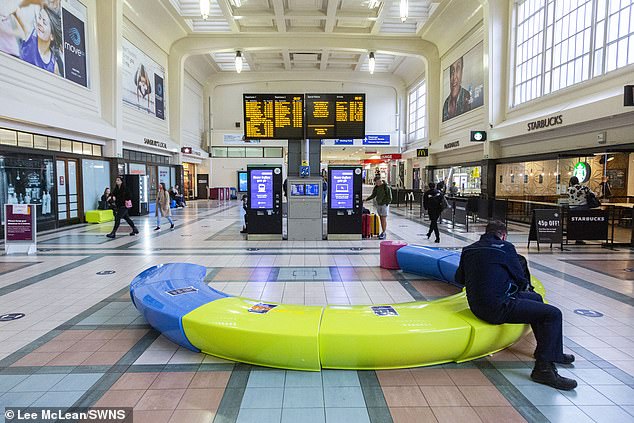 Rail ticket sales are down 85 per cent on last year for the first half of 2020 as work-from-home inflicts damage on the wider economy, ticket app Trainline said (pictured, Leeds train station) 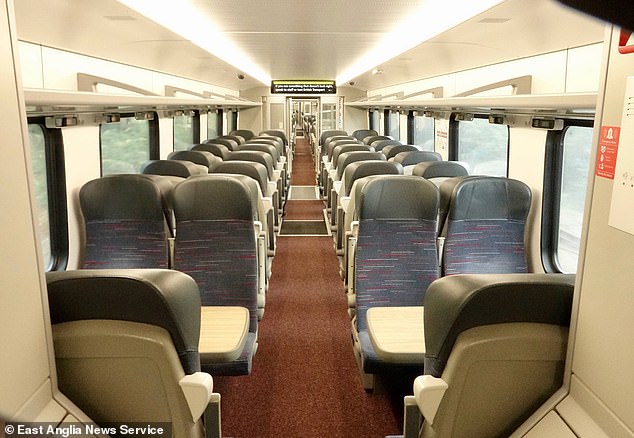 The group said that ticket sales across the UK slumped to £67million in the first quarter, with just eight per cent of prior year levels. Though sales picked up in the second quarter to £174million, this was still just 22 per cent of those seen a year earlier, the group added

The Transport Secretary has sought to reassure the public that buses and trains are safe to use during the pandemic, telling the Commons: ‘The number of passengers now returning was just 42 per cent last week and I think it’s incumbent on all of us to demonstrate that the railways are safe, to take the railways from time to time which I’m sure members across the House do and to reassure people of the safety and efficacy of the use of the railways and all other public transport systems.’

Meanwhile, Trainline said: ‘With the industry now on a path to recovery, albeit more slowly than previously expected, Trainline is phasing its operations back to normal.’

Its chief executive, Clare Gilmartin, said: ‘By acting quickly and remaining agile, we continue to successfully navigate through the significant disruption Covid-19 has caused to the rail and coach industry.

‘I’m pleased to now see the industry recovering, particularly in our International markets, as well as a faster shift to online reservation and digital ticketing, as anticipated, given the increased customer need for touchless travel.’

The Trainline boss added: ‘We will continue working hard to make rail and coach travel easier, safer and more accessible, reassuring customers and generating incremental demand for the industry.’

It comes amid threats from public health chiefs to have another go at smashing the UK economy as they warn of looming curfews in London, while ministers warn the ‘work from home’ order could be reinstated soon.

Employers will be left with no choice but to send staff to work from home, business leaders claimed, due to the shortage of Covid-19 tests.

Such a move would put a sizeable dent in the little progress that has been made to boost the economy since certain restrictions were eased. 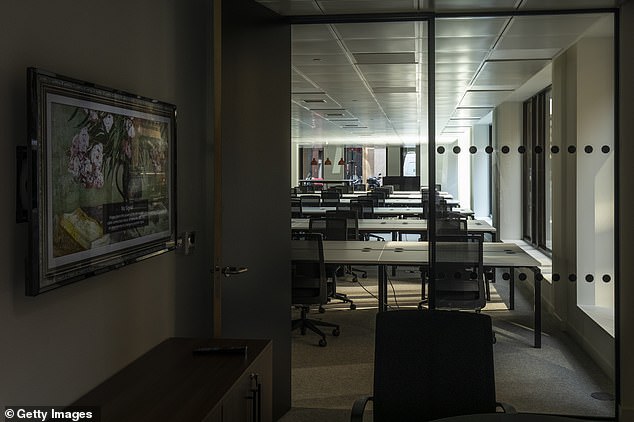 A fortnight would be needed to determine whether Boris Johnson’s new rule of banning gatherings of seven or more people had successfully reduced infections, senior government sources told the Telegraph.

They added that further lockdown measures may be required if not, with Chief Medical Officer Professor Chris Whitty understood to be recommending a second.

Official messaging of ‘go to work if you can’ appears to have been dropped, while No10 has also insisted there is no ‘back to work’ campaign being driven in the same way other key advice is being communicated with the public.

However, telling workers to stop going back to their desks would inflict further woe on pubs, cafes and restaurants which have already struggled during the pandemic and are only recently reaping the benefits of more footfall.

Mr Argar said there are ‘no plans at the moment’ to advise all workers who can work from home to do so as he left the door open to the possibility in the coming weeks.

The minister said the Government is focused on ‘making the rule of six work’ and the hope is that the new restriction on social gatherings will be enough to get the virus back under control.

But he said the Government is ‘continuing to review the science’ as well as the latest infection rates amid fears that tougher lockdown rules could soon be reimposed.

At the start of September Mr Johnson had told his Cabinet that ‘people are going back to the office in huge numbers across our country and quite right too’. 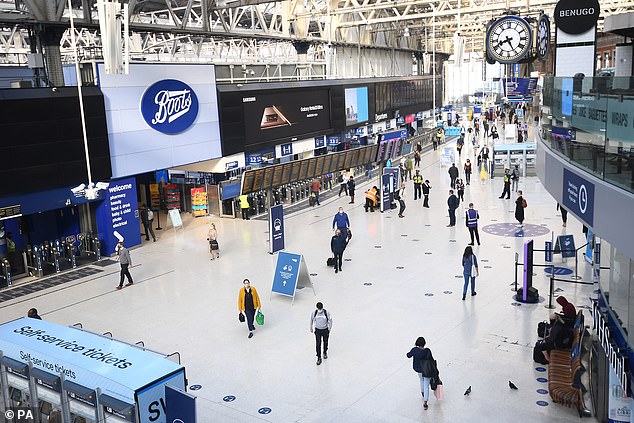 The Government has faced sustained pressure from Tory MPs to do more to encourage workers to return to their offices.

They fear continued working from home will sound a death knell for many businesses in urban centres which are reliant on commuter footfall to survive.

It comes as more than half of workers have said they never expect to return to a five-day working week in the office, a new survey by TalkTalk has found.

A new report called ‘Lockdown Lessons’ also found that 58 per cent of people in employment said they felt more productive as a result of working from home.

Bosses also agreed, with 30 per cent of business leaders saying the changes had seen a boost in productivity and 35 per cent said the moves had seen more collaboration.

Professor Chris Whitty is pushing for a new two-week national lockdown amid concerns the true number of coronavirus cases is far higher than being reported, a former World Health Organisation expert claims.

Anthony Costello, who sits on the independent SAGE panel, made the statement on Twitter on Wednesday evening, adding that daily infections could be as high as 38,000.

According to Mr Costello, the Prime Minister has been told by his Chief Medical Officer that such a move may be needed to stop the recent rise in infections.

He wrote: ‘I’m hearing from a well-connected person that government now thinks, in absence of testing, there are 38,000 infections per day. Chris Whitty is advising PM for a two week national lockdown.’

The new working arrangements for millions of office workers also found that with the commute being removed, many are turning to learning a new skill or hobby, the survey found.

Around 40 per cent said they had watched an online educational video during lockdown and 16 per cent enrolled in an online learning course.

In other areas, nearly one-in-four work-from-home staff started learning a new language, with a similar number also learning new cooking methods. Around 15 per cent said they researched baking and 13 per cent learned about gardening.

TalkTalk added that internet usage during lockdown increased 40 per cent year-on-year and has remained at high levels, despite the relaxation of rules and the reopening of pubs and restaurants. Uploads have also increased significantly, the data found.

The company is hoping the increase in work-from-home staff will lead to demand for more reliable internet and has launched a business-quality broadband service for companies willing to install faster connections in workers’ homes.

But less than half – 40 per cent – of business leaders said they have provided financial support to employees for phone or home broadband bills and only one in four have invested in mental health and wellbeing apps for staff.

The survey also found that 62 per cent of bosses believe they can save money to spend on upgrading home working due to less work trip costs and 45 per cent said company entertainment spend is also expected to fall.

Tristia Harrison, chief executive at TalkTalk, said: ‘Lockdown Britain has seen a boost in skills and productivity for home workers, with unexpected lessons for how we emerge from the pandemic.

‘As people have been working from home, they’ve also been learning: from new languages, to cooking, to IT skills. With flexible working we’re becoming so much more productive it seems that Britain is now getting five days’ work done in four, which is encouraging as we build back from the crisis.’

Catherine Barnard, from consultancy Working The Future, which analysed the data for TalkTalk, said: ‘A future where a four-day work week is the norm could be a lot closer than people think.

‘If someone can do their work in four days rather than five as a result of flexible working hours, it stands to reason that they can use the fifth day to further improve skills that complement their role. The challenge is to pivot from a ‘one-size-fits-all’ approach to employment.’