Ignoring NHS Covid app alerts is NOT illegal: Pub owner wants to remind public that refusing to self-isolate after being ‘pinged’ is NOT against the law 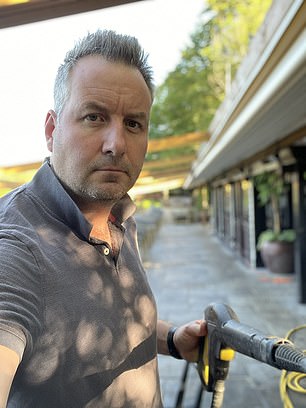 A pub owner wants to remind the public ignoring NHS Covid app alerts is not illegal, amid fears Test and Trace is causing a ‘lockdown by stealth’ by forcing people to stay at home even when they have been vaccinated and test negative.

App users who are ‘pinged’ after coming into contact with someone who has tested positive are under no legal obligation to stay at home.

They are kept anonymous through the app, meaning authorities are unable to track them down if they have been told to quarantine.

But anyone contacted by NHS Test and Trace workers does have to self-isolate under regulations brought in last autumn to tackle coronavirus. That rule won’t be dropped for fully vaccinated adults until August 16.

Amid fears millions could be told to self-isolate over the next few weeks because of soaring cases, one pub owner was keen to point out notifications on the app carry no legal obligation to quarantine at home.

The reminder comes amid claims that Brits are deleting the NHS app to avoid being ‘pinged’. It has been downloaded almost 26million times.

Business have voiced alarm the test and trace system is ‘casting the net wide’ with how many people it orders to stay at home after coming close to a positive case — as anger grows at the six week delay in exempting double-jabbed people from the regime.

Hospitality chiefs said say they are already seeing staff uninstalling the official app to avoid the threat to their livelihoods, with many unaware there is no legal obligation to follow its instruction.

MPs questioned whether customers will take the chance of going to pubs while the rules are so tight. 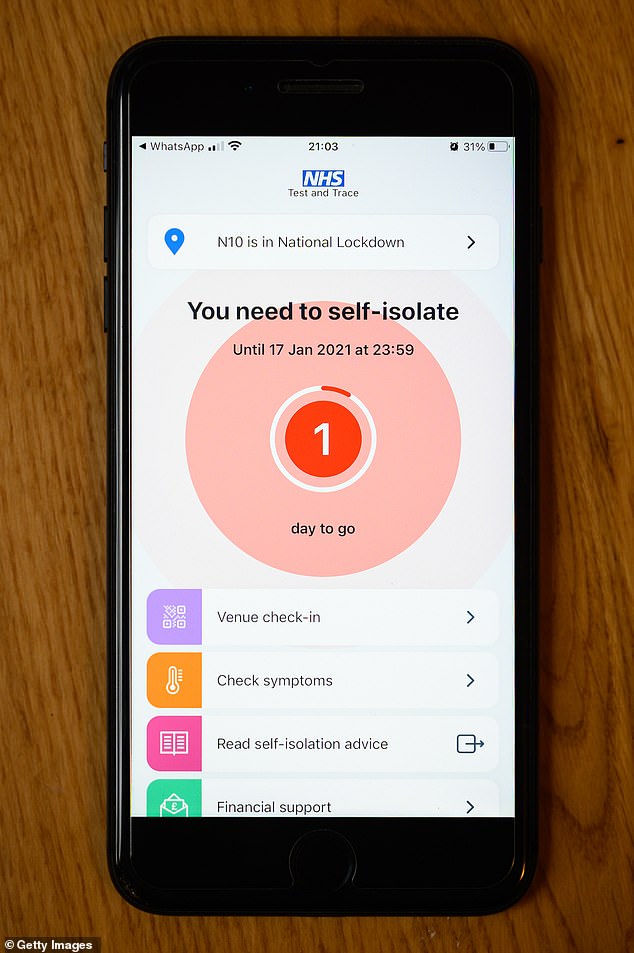 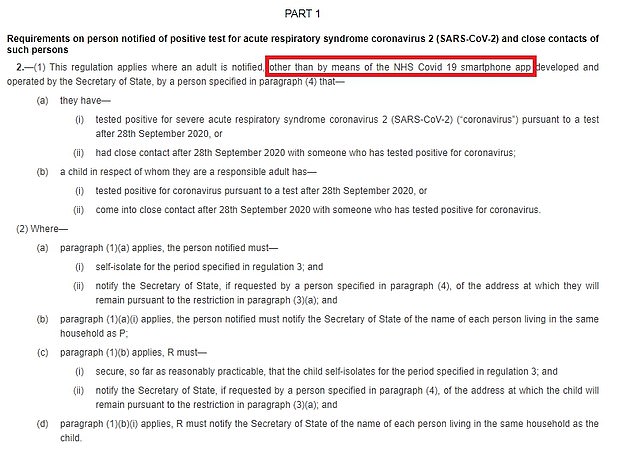 The Health Protection (Coronavirus, Restrictions) (Self-Isolation) (England) Regulations 2020 order people to self-isolate if contacted by Test and Trace, but not the app [bolded in red] 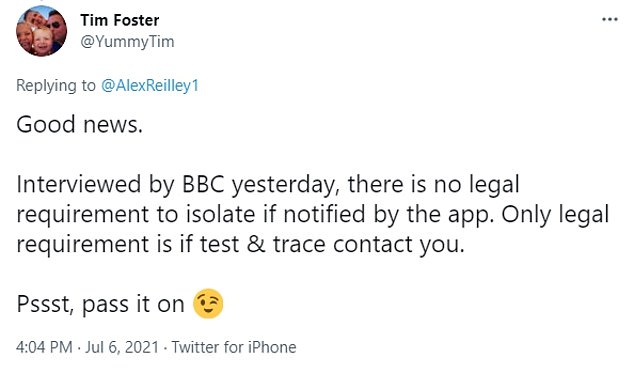 How does it work?

Bluetooth technology keeps a record of which phones spend 15 minutes within two metres of one another and then alert people if they have been near someone who later tests positive for Covid.

People’s phones are only recognised by the system if they are running the app themselves — it cannot detect others.

The contacts it keeps track of are all anonymous and phones exchange digital ‘tokens’ with every app-using phone within Bluetooth range.

If one person develops symptoms of Covid or tests positive, they will be able to enter this information into the app.

The phone then sends out a notification to all the devices they have exchanged tokens with during the infection window, to make people aware they may have been exposed to Covid.

Each phone keeps an individual log of the Bluetooth profiles someone has come close to. These are linked anonymously to people’s NHS apps and alerts can be pushed through that even after the person is out of bluetooth range.

Will the app produce me a sick note?

The app does not generate a sick note itself.

But if you need one for an employer you can inform the NHS’s online 111 service that you have been told to self-isolate by the app and it will generate one.

Will the government know if it tells me to self-isolate but I don’t?

No, the system relies on the goodwill of users to comply with the app’s request to self-isolate.

App users are entirely anonymous and the app cannot force them to self isolate or identify them if they are failing to do so.

Any personal data is anonymous and will not be sent to the government so police can check if the app’s instructions are being followed.

The app can only react to data that people put into it, and it will only ever offer guidance. If a user reports that they have symptoms of coronavirus – a new continuous cough, a fever, or a changed sense of smell or taste, they will be urged to self-isolate for 10 days from the start of the symptoms and to get tested.

How well does it work?

The app is far from perfect, with the Department of Health has admitted that around half of people who are warned they have been near an infected person will actually not have been within the 2m for 15 minutes danger window.

A Government document published in April, which outlined the effects of the app, said: ‘A key point to note is that an app notification to isolate, based on exposure, is not legally enforceable.’

But it said the instruction becomes legally enforceable as soon as someone who is pinged attempts to apply for isolation support payments.

From the middle of next month people who have received two vaccine doses — with the second administered at least two weeks previously — can take PCR tests rather than self-isolating, and will no longer be ‘pinged’.

Under-18s will also not be subject to the restrictions from the same date.

The NHS Covid-19 app was finally rolled out in September last year, four months later than planned, but people with phones more than five years old reported being unable to download it.

Its software works by using Bluetooth technology to detect when users have come into close contact with someone who tests positive for the virus.

They then receive an alert telling them to self-isolate for up to 10 days and to book a test if they start suffering from Covid symptoms.

But although ‘close contact’ in theory means being within a two-metre radius of someone for at least 15 minutes, some people will receive alerts when they have been further away.

The app struggles to calculate distances so it may record someone as being in close contact even if they have been just over two metres away, and in rare cases up to four metres away.

It is for those living in England and Wales. Northern Ireland and Scotland have their own contact tracing apps, which were launched at earlier dates.

People across England must now self-isolate if they test positive for Covid or are contacted by the Test and Trace service or risk being hit with fines.

Fines start at £1,000 and increasing up to £10,000 for repeat offenders or serious breaches, according to the Department of Health and Social Care (DHSC).

People who have received a positive test must isolate for ten days after displaying symptoms or their test date if they do not have symptoms, while members of their household must isolate for 14 days.

The DHSC also said that police resources will be used to check compliance in the highest incidence areas and in high-risk groups based on ‘local intelligence’.

But people on low incomes who cannot work from home and have lost income as a result are eligible £500 Test and Trace support payment in England.

The DHSC said a number of other measures will be taken to ensure people comply with the rules including Test and Trace call handlers increasing contact with people self-isolating.

High profile and ‘egregious’ cases of non-compliance are investigated and prosecuted while action has been taken on tip-offs from ‘third parties’ about people who have tested positive but are not self-isolating, the DHSC said.

A DHSC spokesman said: ‘Users of the official NHS Covid-19 contact tracing app are anonymous and we cannot force them to self-isolate or identify them if they are not self-isolating.

‘The app will advise a user to self-isolate if they have come into close contact with someone who has tested positive for coronavirus. Users should follow that advice to protect their loved ones and stop the spread of the virus.’