A Ukrainian religious leader who blamed gay marriage for the spread of coronavirus has tested positive for Covid-19.

Patriarch Filaret, 91, who heads one of Ukraine’s largest Orthodox congregations, is in hospital and in a stable condition after being diagnosed with the disease following routine testing.

Filaret has also developed pneumonia, according to the Ukrainian news website 112.international.

The Patriarch’s diagnosis was confirmed on Friday in a statement posted on Facebook.

‘We inform that during planned testing, His Holiness Patriarch Filaret of Kyiv and All Rus-Ukraine tested positive for Covid 19. Now His Holiness Bishop is undergoing treatment at a hospital,’ the statement said.

Filaret is one of Ukraine’s most prominent religious leaders, and claims to have 15 million followers among its 42 million people.

He is a renowned figure in the country, having led a split of the Ukrainian church from its Russian parent which had him defrocked and excommunicated.

But he was on the end of heavy criticism from LGBT groups in March for his comments, saying that the spread of the deadly virus was divine retribution for same-sex activity, which he sees as sinful. 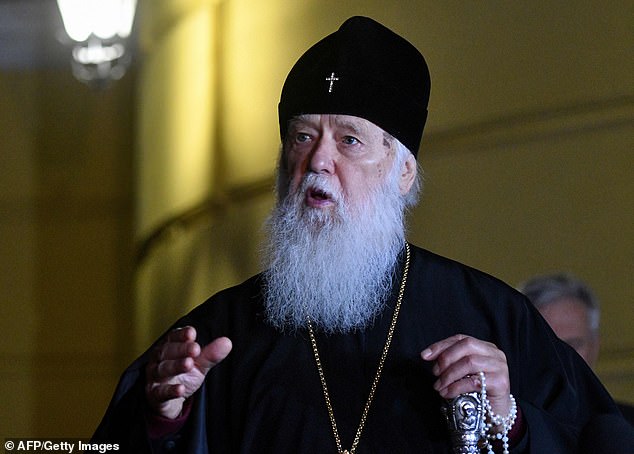 Pictured: Patriarch Filaret of the Ukrainian Orthodox Church of Kiev’s Patriarchy, who blamed the spread of Covid-19 on gay marriage, has tested positive for coronavirus himself

Filaret told Ukrainian national TV network Channel 4 that the epidemic was ‘God’s punishment for the sins of men, the sinfulness of humanity. First of all, I mean same-sex marriage,’ he said.

On April 13, a Ukrainian LGBT+ group said it had sued Filaret for his comments, in what the group said was the first such case in an ex-Soviet nation.

Rights groups described his comments as ‘dangerous’ saying they risked stirring violence at a time where the health crisis was already stoking tensions and anxieties.

‘Such statements … are very harmful because they could lead to increased attacks, aggression, discrimination and acceptance of violence against certain groups,’ Maria Guryeva, a spokeswoman for Amnesty International Ukraine, said at the time.

Responding to reports about a possible lawsuit in March, the Patriarchate said Filaret’s remarks were consistent with Ukrainian laws.

‘As the head of the church and as a man, the Patriarch has the freedom to express his views, which are based on morality,’ the Patriarchate’s press service said in a statement.

‘The Patriarchate reserved the right to bring counterclaims against those who sought to abuse judicial protections to encroach on Ukraine’s traditional family values,’ it added.

The administrative proceeding filed in a Kiev court sought to obtain an apology for disseminating false information and a rectification from the Patriarch and the TV channel that aired the interview, said Shevchenko of Insight the group that filed the lawsuit.

‘We just want them to be more responsible the next time,’ she said. ‘Our aim is to show people that there is no longer place for such statements from church leaders in Ukraine.’

While the Ukrainian government has increased support for LGBT rights in recent years, same-sex unions are not legally recognised and activists say homophobia remains widespread.

Patriarch Filaret is not the only religious leader to have blamed the virus on LGBT people since it first emerged in China late last year.

Prominent leaders in the US and a rabbi in Israel have since claimed the virus is ‘divine intervention’ in response to LGBT rights.

In response, the World Health Organisation has condemned the spread of misinformation, and warned that it fuels discrimination and stigmatisation.

Related posts:
TV and Movies
Holly Willoughby grills Celebs Go Dating's Wayne Lineker, 58, and asks 'why can't you date women your own age?'
Drag Race UK: What day is Drag Race UK on?
WWE Stock Slips on News WWE Network Is Folding Into Peacock
James Bond cast: Could the next James Bond be a woman? ‘Odds on’
Recent Posts
This website uses cookies to improve your user experience and to provide you with advertisements that are relevant to your interests. By continuing to browse the site you are agreeing to our use of cookies.Ok