Two former LSU students say they were raped by former Washington Football Team running back Derrius Guice while he was a freshman at LSU, according to USA Today.

The two women claim both incidents were reported to officials at the school, including coaches. It does not appear, however, that LSU investigated either accusation, according to USA Today. Under Title IX rules — which were in place at the time of the alleged rapes — universities are required to investigate sexual assault claims.

Guice, 23, was released by Washington on Aug. 7 after a domestic violence arrest. Earlier that day, Guice turned himself in on three charges of assault and battery, one count of destruction of property and a felony count of strangulation.

USA Today says it began reporting on its story Aug. 3, four days before Guice was arrested. USA Today also says it interviewed one of the women in January regarding Guice’s alleged assault. The woman also documented her encounter with Guice in June as part of a lawsuit against the NCAA.

Content warning:There are graphic depictions of domestic violence below.

One of the alleged victims was a former tennis player at LSU. She claims she was raped by Guice after the two met at a bar. Guice bought the woman multiple shots. She told USA Today she was “extremely” intoxicated to the point where she was “way too drunk to give consent in the first place.”

Guice drove the woman home and then texted the woman about coming to her apartment. The woman agreed, saying she told Guice nothing was going to happen. She says she remembered Guice forcing her to perform oral and vaginal sex.

The woman — who said she had been abusing alcohol and prescription drugs before meeting Guice — started drinking more after the alleged rape and eventually checked herself into rehab. While in rehab, the woman informed a counselor about the alleged assault by Guice. An employee at the rehab center reportedly informed LSU. 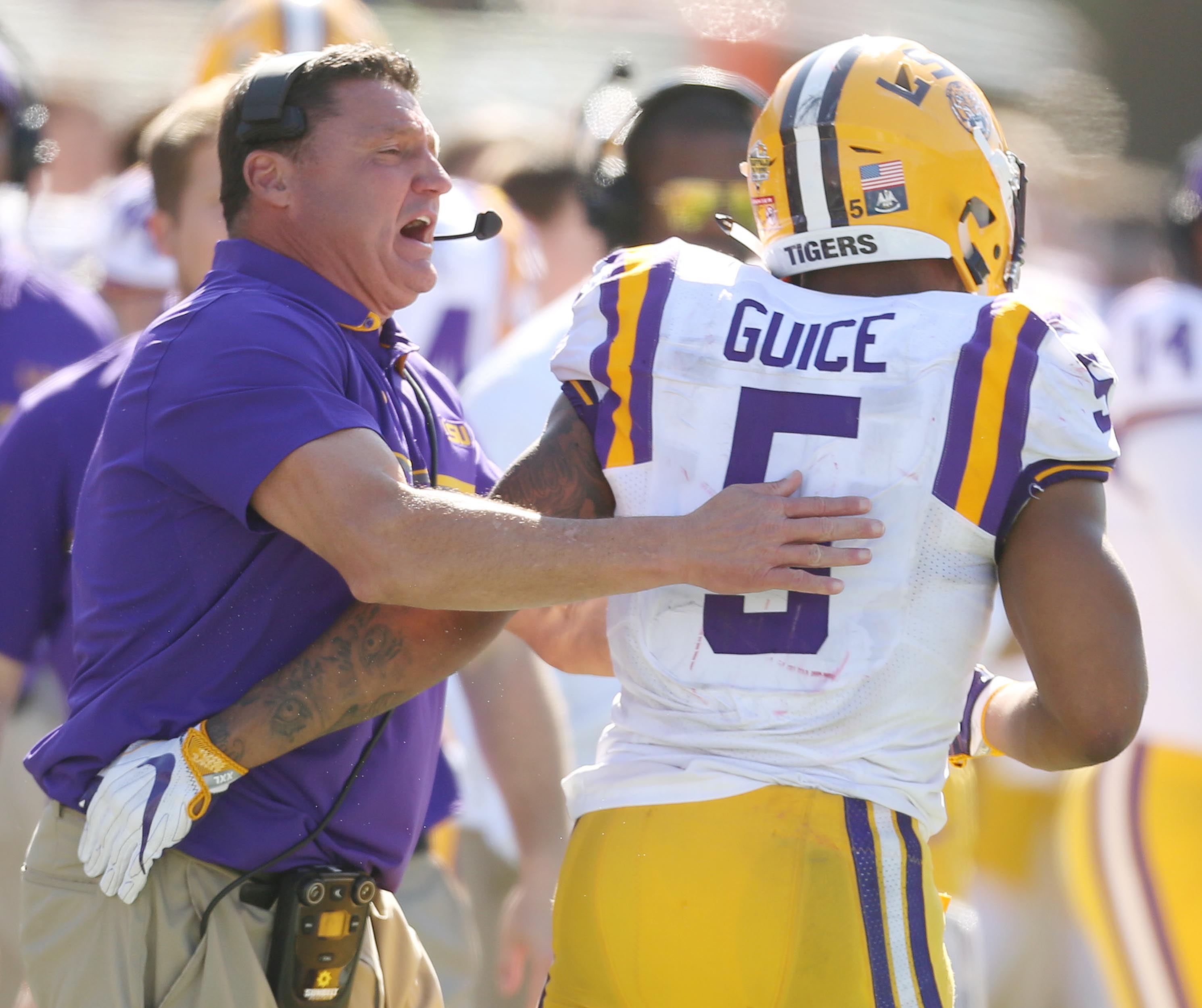 The other victim says she was raped by Guice while sleeping in her bedroom. The woman reportedly hosted a party in her apartment, which was attended by Guice and other football players. The woman says she eventually went into her room and shut the door to go to sleep. When she woke up, the woman said she knew she had been assaulted. She believed Guice assaulted her because he put his number into her phone. Other players on the LSU football team said Guice told them he had sex with the woman.

The woman informed a friend — a diver at LSU — of the assault. The diver reported the assault to her coach, who reported it to LSU officials. The woman who says she was raped by Guice says she received an email from LSU saying the university was aware of the incident and that the woman could get treatment at the university health center.

When a school nurse asked whether the woman would file a complaint against Guice, the woman said she was “scared to go forward with it because he was so violent.” The woman claims the nurse said the allegations “probably would get pushed under the rug” considering Guice’s status at LSU.

The woman was dating an LSU football recruit at the time, though he was not present at the party. He redshirted with the LSU football team as a freshman, but steered clear of Guice. According to USA Today, the former LSU redshirt freshman claims head coach Ed Orgeron approached the player about a year after the alleged assault to tell him he shouldn’t be bothered by Guice sleeping with his girlfriend. The player claims Orgeron told him, “everybody’s girlfriend sleeps with other people.”

Orgeron did not respond to USA Today’s request for comment.

Once the woman made it clear she did not consent to sex with Guice, she claims Guice got violent. Guice allegedly confronted the woman while she was at a friend’s apartment. The woman claims Guice went off, telling the woman she doesn’t know Guice and threatening to get his gun.

The woman got into drugs and was eventually arrested. While in rehab, the woman wrote a letter to Guice, which she shared with USA Today. While the letter doesn’t mention Guice’s name specifically, it asks, “I wonder what the media would say if they knew the real monster you are.”

When the woman heard Guice was arrested, she told USA Today, “Wow, they finally got him. They finally caught him.”

LSU did not answer specific questions regarding the Guice accusations. It did, however, issue a statement to USA Today saying the university takes sexual assault accusations seriously.

“LSU and LSU Athletics take all accusations of sexual assault with the utmost seriousness. Formal complaints are promptly and fully investigated and the rights and privacy of students are protected as stipulated by the Family Educational Rights and Privacy Act. Complainants are also strongly encouraged to report the offense to law enforcement and are provided information on health care, counseling and supportive measures available.”

Guice is due in court Aug. 28 following that arrest. The NFL has not issued a statement regarding Guice’s arrest. NFL vice president of communications Brian McCarthy told USA Today the NFL was not aware of any sexual assault allegations or Title IX complaints against Guice until last month.