Back to the future on a Victorian marvel: They’re lockdown’s most unlikely revival. But as ROBERT HARDMAN found, it’s one thing to get a penny-farthing moving – and quite another to stop at the traffic lights!

Only when you stand next to one of these things do you appreciate what an astonishing prospect this must have been for Victorian Britain.

Here is the man-made equivalent of the bumblebee: a mathematically absurd, fundamentally flawed design that cannot possibly work — and then does.

What’s more, in the space of an hour, I have gone from being a traffic hazard to a London tourist attraction. People smile, wave, yell friendly remarks.

‘Give us a wheelie!’ shouts a builder on a fag break.

With no brakes and a very rudimentary stopping technique, I trundle serenely through three red lights in full view of the police who merely smile indulgently.

Indeed, when I go past Buckingham Palace, I upstage the guards. A group of tourists swivel round from gawping through the railings and start snapping me instead. 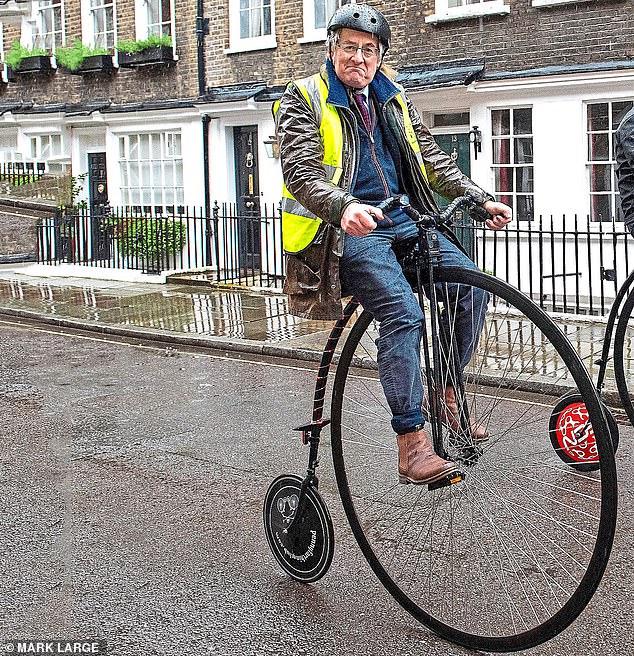 But we may soon be seeing rather more of the most famous — if challenging — character in the history of cycling.

And for that, bizarrely, we can thank the coronavirus.

Of all the unexpected side-effects of this pandemic, none, surely, is as wonderfully bonkers as a surge in demand for the penny-farthing.

Cycling in general has seen a marked upswing over the past year — and it’s not all about Lycra and 27-speed carbon-fibre mountain bikes. Some purists are turning to the tweedy, one-speed world of 19th-century pedalling.

Roger Davies of UDC, a leading distributor of penny-farthings, says business has rocketed. ‘We used to sell maybe 100 a year but that’s doubled since the first lockdown and there’s a waiting list for spare parts,’ says the dealer, based in Billingham, County Durham, who has his £1,295 models made in Taiwan.

The tiny handful of British manufacturers are seeing a similar rise, too. This week, Joff Summerfield, a former Formula One engineer who built his own penny-farthing and then rode it round the world via Everest base camp, will start production of a £1,500 model at a new workshop in Kent.

The first model — known as the ‘ordinary bicycle’ — appeared in the 1870s and was instantly nicknamed after the coinage of the day, the (big) penny and (tiny) farthing.

Vast crowds would flock to watch these things racing but, come the turn of the century, they had been superceded by the advent of the chain, the gear and the pneumatic tyre.

After a century as a museum piece, they started to enjoy a modest revival ten years ago. As one or two started to reappear on the road, so more people had the same idea. But what is the appeal? Why now? And, besides, where do you store a device the size of a small horse?

Having taken the plunge three years ago, Jeremy Vine, the BBC presenter and ardent cycling fan, has an ingenious storage solution: when not riding his penny-farthing, he hangs it on the wall of his living room like a painting. 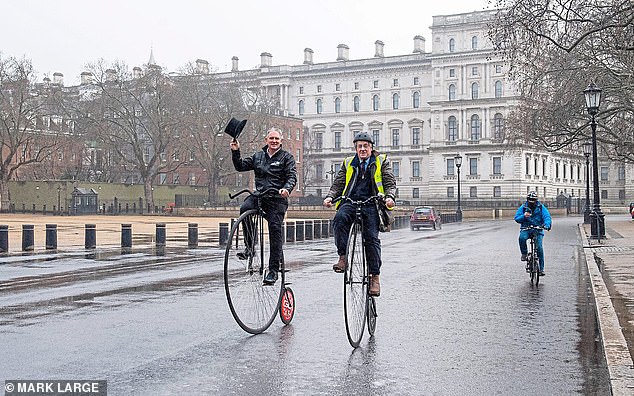 ‘It’s a brilliant invention, one of the most beautiful things designed by man,’ he says.

It’s time to see what the fuss is about. I contact the Penny Farthing Club, which offers tuition and tours of London, Bath and Brighton. The club was founded eight years ago by former Royal Marines officer Neil Laughton, who holds assorted Guinness world records, including speed and distance for riding a penny-farthing with no hands.

We meet at the club’s London lock-up, near Westminster, where Neil keeps a stable of machines, ranging from a 46in front wheel to a 56in whopper.

In essence, your choice of penny-farthing is governed by your inside-leg measurement. Those shorter than 5 ft will not reach the pedals.

Neil talks me through the history of the design — ‘it was actually invented by the French but we won’t dwell on that’ — before we head for a quiet square to master the basics.

The only way on to a penny-farthing is from the rear, and you can’t clamber aboard until it is in motion. That means pushing it like a scooter from behind with one foot on a peg. Once you have got momentum, it is a case of stepping up to another peg with the other foot then swinging both legs up to the saddle.

Easier said than done. With no gears, the pedals go round with the wheel and vice-versa. Put a foot on the pedals before sitting down and you will perform what is known as ‘a header’ — over the handlebars.

On the other hand, if you don’t start pedalling pronto, you will stall. We all experience that when we first learn to ride a bike — but the difference is there are no stabilisers on this thing and it’s a very long way down.

It takes me back to my six-year-old self as Neil runs alongside holding me upright until I can break away on my own. It is still an exhilarating ‘Eureka!’ moment, even for a panting middle- aged lump.

While there is no suspension, the big wheel actually absorbs a lot of the bumpiness. But you have to steer it very delicately. Turn too sharply and you will either go over the front, hit the kerb or chafe the wheel against your inside leg.

So far, so good. But then comes the really tricky bit. Unlike every other form of transport I have ever known, I can only get off this thing while it is still moving. It takes me back to the day I went to report on the world’s tallest horse at a farm in Staffordshire. He was so large that no saddle would fit him and I had to ride him without one. That was bad enough but at least he would stand still when required.

A penny-farthing, however — like a shark — demands constant forward motion. The trick is to slow down, without stalling, and then quickly follow the mounting process in reverse. Except I find myself desperately waving a foot in search of that elusive foot peg and collapse in a heap.

A few more trial runs, though, and I feel I have cracked it.

‘It’s all about thinking ahead,’ says Neil. ‘You can’t just pull up at a red light and stop.’ Indeed not.

As we set off for a tour of the local landmarks, that is uppermost in my mind. Most cyclists live in dread of lorries and car doors. Up here, I am paranoid about traffic lights.

Neil rides ahead to guide me and we are soon in Parliament Square. Uh oh! The light in front is turning from amber to red, I am 50 ft away and there must be half a dozen police officers watching (everyone watches a penny-farthing).

Neil just beckons me to keep on going — there are no pedestrians in range — so on we go.

Down in the Mall, I see two mounted police officers up ahead riding side by side. They stop their horses when the lights go red. I am afraid I do not, though I am going at a very modest speed. Full steam ahead . . .

At the next lights, however, there is a problem. Two lanes of traffic have stopped ahead and I am going to have to stop, too. Momentarily forgetting the drill, I go into a terrible wobble and then keel over sideways.

Fortunately, I land on my right foot and just manage to prevent the bike from hitting the paintwork of the car alongside. ‘The worst thing you can do is panic,’ says Neil, ‘and you just did.’ I don’t make that mistake again.

Later on, I talk to Jeremy Vine, who tells me that there is nothing quite like an occasional spin on the penny-farthing for focusing the mind: ‘If you are into mindfulness, then get a penny-farthing.’ He regards it as a perfect pandemic pursuit.

‘Your head is 10 ft above the ground, you’re not breathing over anyone and it’s proper exercise.’

His only prang, he says, was when he was riding through a park and suddenly found himself in the midst of a throng of slow-walking pedestrians. Running out of momentum, he simply had to look for the nearest patch of grass and fall on to it.

In common with most enthusiasts, neither Jeremy nor Neil feel that modern cycling kit is quite right on a penny-farthing. While Jeremy has a stylish tweed-cover for his cycle helmet, Neil prefers a top hat.

At the extreme end of the sport, there is a very competitive penny-farthing racing scene. Neil takes part in an arduous annual race from Eastbourne, East Sussex, up the hill to Beachy Head and back.

Unlike normal races, however, competitors tend to get off and push their bikes on the way down.

So how do you stop one of these things when you’re going flat out? Neil laughs: ‘You can’t.’