Not just the Bare Necessities! Rudyard Kipling’s bachelor pad where the Jungle Book author wrote his famous poem ‘The Road to Mandalay’ goes on the market for £2.49million

A lucky buyer could soon own the home of famed British poet and Jungle Book author Rudyard Kipling after his two-bedroom London flat went on sale for £2.49 million.

Kipling is said to have written his famous poem The Road to Mandalay and The Light That Failed, his first novel, while he lived in the Embankment flat near Covent Garden between 1889 and 1891.

His former flat is on the fifth floor of an eight-storey building, on a site which traces its history back to the Bishop of Norwich in 1237. 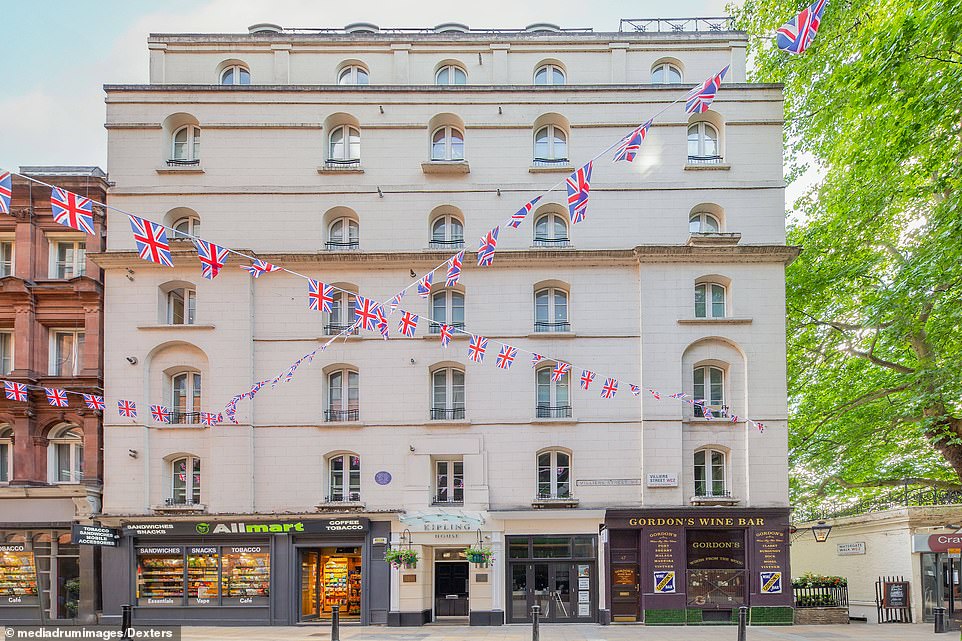 The historic building is walking distance from Embankment station on one side and Covent Garden on the other. It also sits above the hugely-popular Gordon’s Wine Bar- believed to be around 600 years old 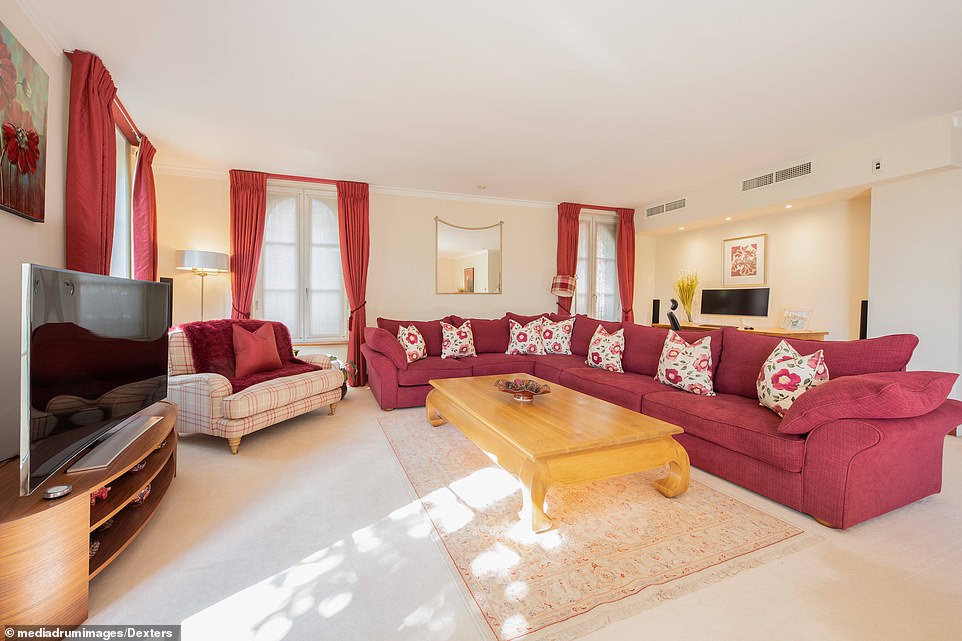 The spacious flat has been refurbished several times in the century since Rudyard Kipling lived there, and has a homely modern interior 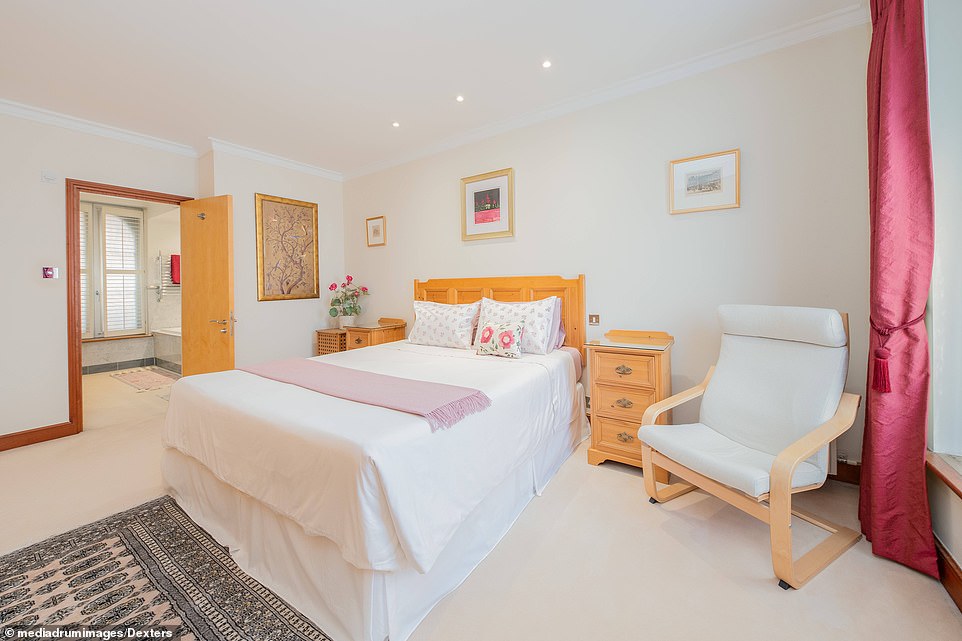 The flat has two bedrooms as well as its living room/dining room and kitchen. It has been put up for sale for almost £2.5 million 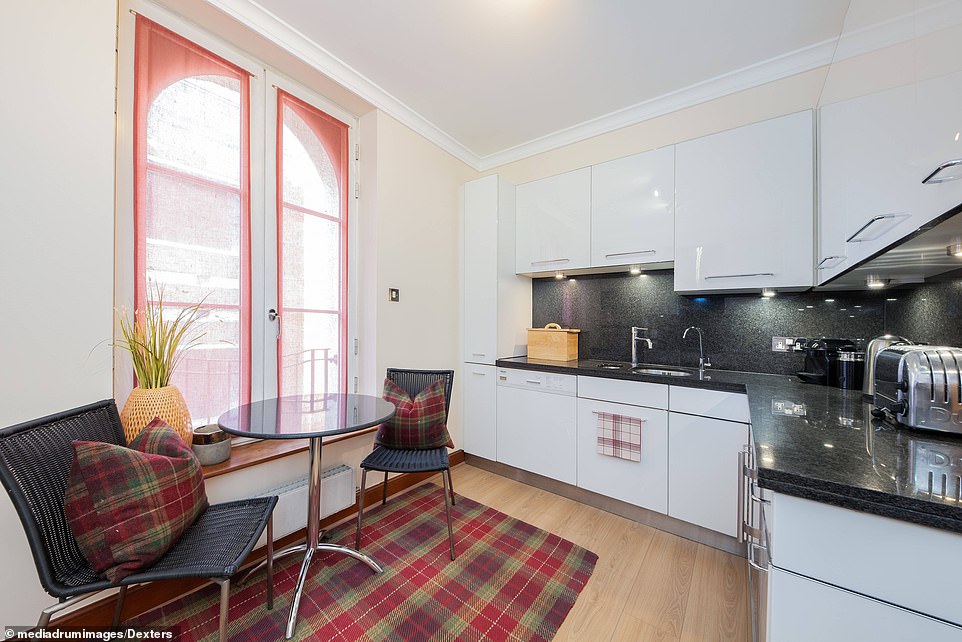 The building was refurbished in the 1920s and renamed Kipling House in the 1950s in honour of the poet – his blue plaque hangs outside it marking the time he spent there.

Samuel Pepys, the famed 17th-century diarist, is also believed to have lived in the building in the 1680s.

Now on sale once again for almost £2.5 million, the flat offers a spacious living room, dining room and study.

Kipling recalled the happy times he spent in the flat in the late 19th century in his autobiography, Something of Myself. He wrote: ‘From my desk I could look out of my window through the fan-light to Gatti’s Music-Hall entrance, across the street, almost on to its stage.’

The flat also sits above Gordon’s Wine Bar – a 600 year-old institution believed to be one of the oldest of its kind in London. It became a wine bar in 1890 while Kipling was still living above it and has remained hugely popular with Londoners since.

It is believed Kipling wrote the 1890 poem The Road to Mandalay in the flat, among other works. The poem was based on Kipling’s travels around Burma and India, and is considered one of the best English-language poems ever written. 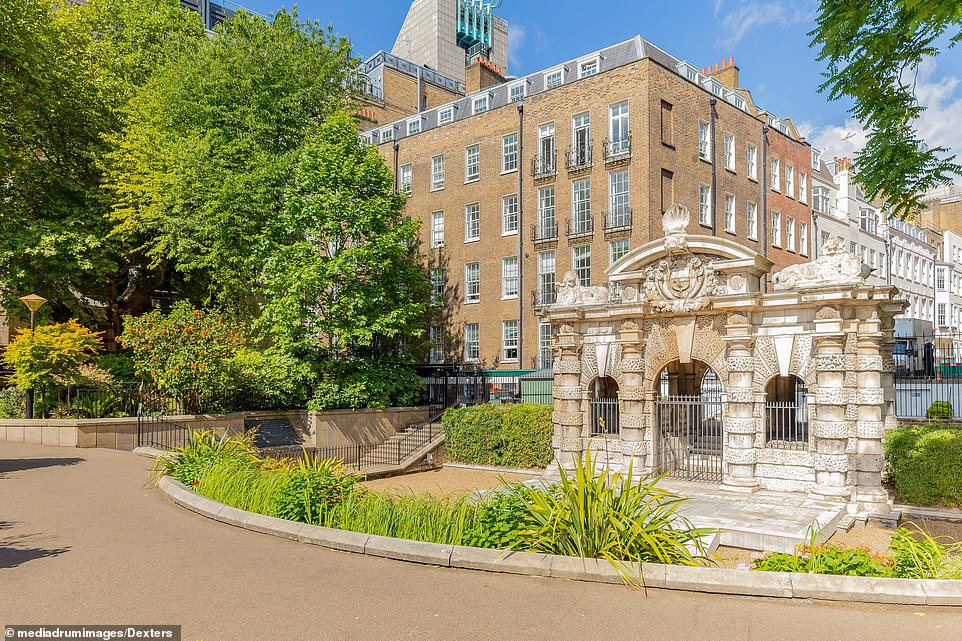 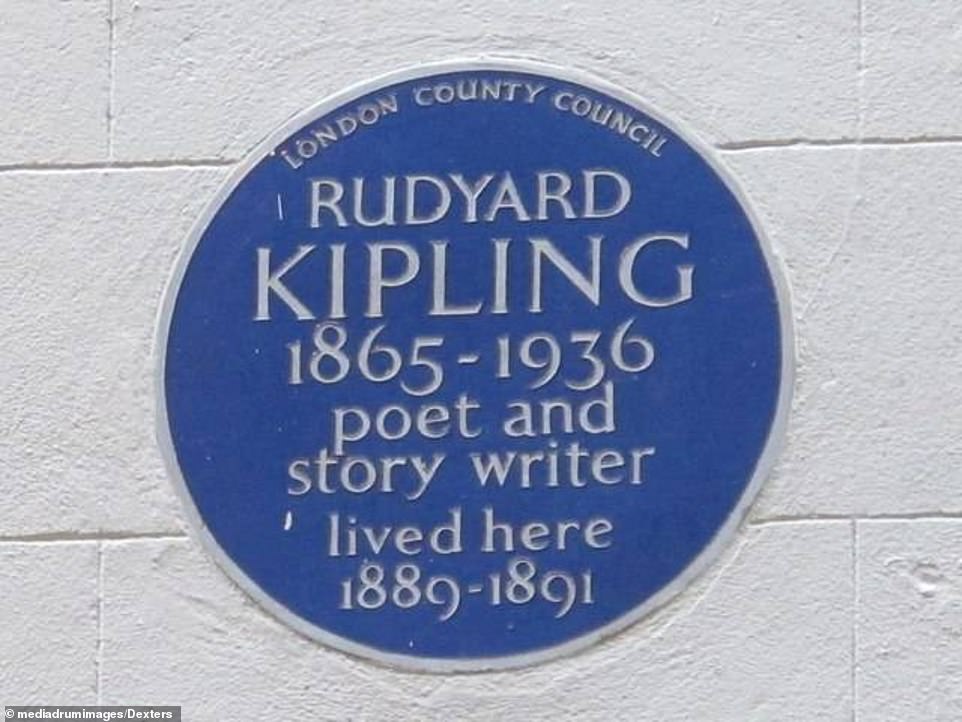 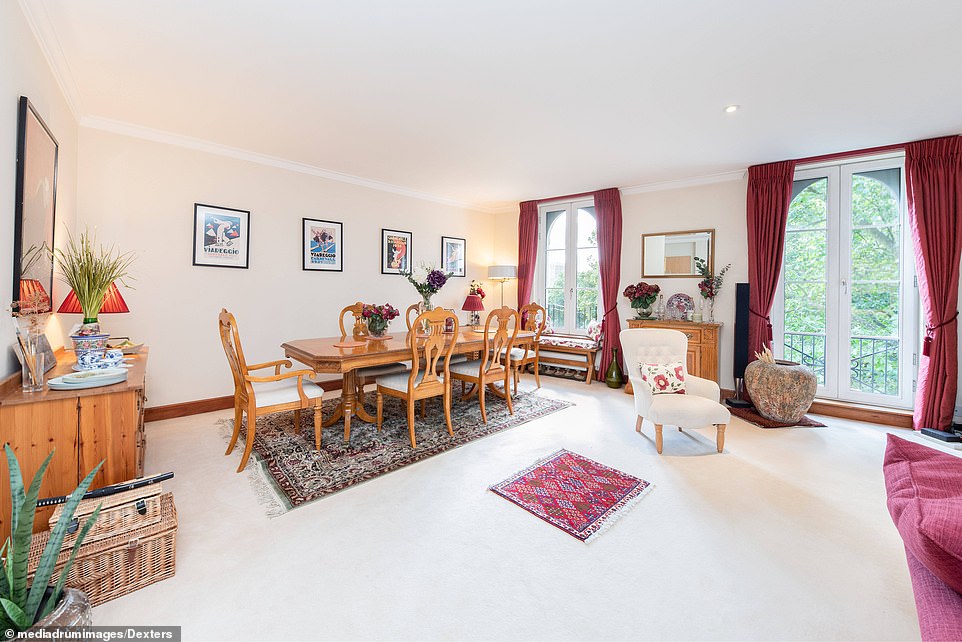 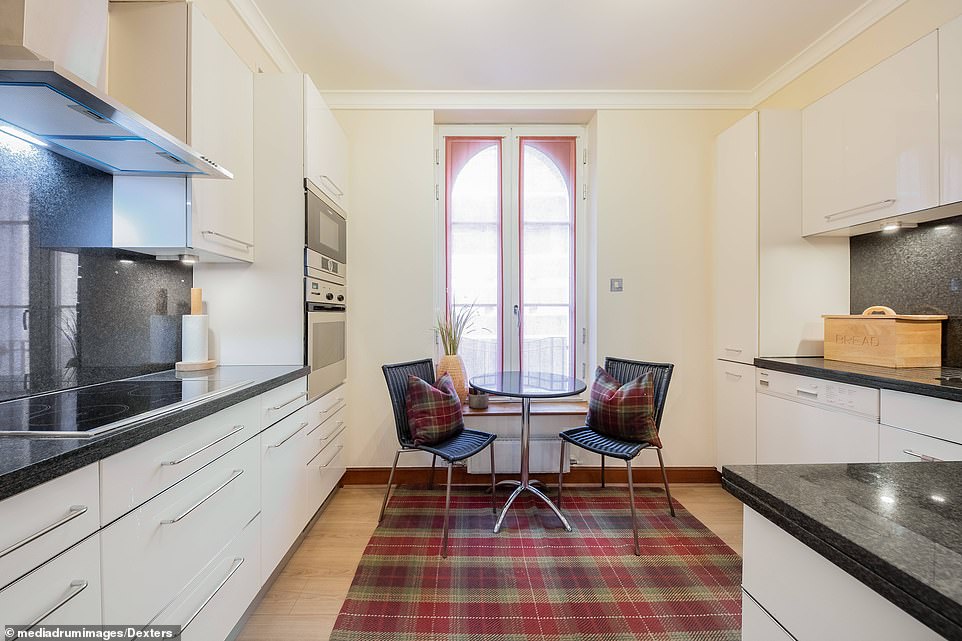 It is believed Kipling wrote the 1890 poem The Road to Mandalay during his time in the flat, among other works

Real estate agent Dexters said of the building: ‘With a Blue Plaque erected in 1957 in Rudyard Kipling’s honour, Kipling House, at 43 Villiers Street is located in Embankment, on the doorstep of Covent Garden and Whitehall,’ reads the listing.

‘Kipling’s fifth-floor apartment, at that time, was above the ground floor shop of ‘Harris the Sausage King’ where Kipling often dined on a cheap meal of sausage and mash.

‘In 1891 Kipling started dating Caroline Balestier, who he later married in 1892, so he left his ‘bachelor lodgings’ at 43 Villiers Street and eventually moved in with Caroline, the family living from 1894 onwards on Ebury Street in Pimlico.’

The listing adds: ‘It is also where he wrote Barrack-Room Ballards, whose verse Mandalay, published in 1890, is famously recited by Lord Mountbatten in Coup, The Crown Series 3, on Netflix.

‘The fully fitted kitchen has stone flooring, sleek white built-in cupboards and cabinets, dark stone worktops and integrated appliances with space by the tall window for a two-to-three-seater dining or breakfast table.’

WHO WAS AUTHOR RUDYARD KIPLING? 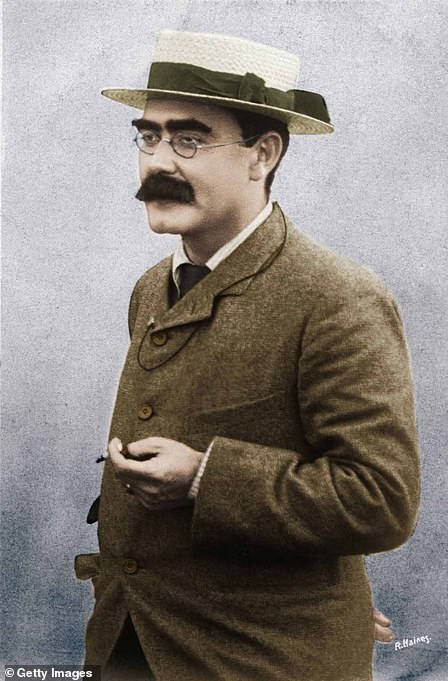 Joseph Rudyard Kipling (pictured) was born in 1865 in Bombay to his British colonial parents, John and Alice Kipling

Joseph Rudyard Kipling was born in 1865 in Bombay to his British colonial parents, John and Alice Kipling. His father was an artist and worked at the Jeejeebhoy School Of Art in Bombay, and young Rudyard and his sister enjoyed exploring local markets with their nanny.

When Kipling was six, his mother decided he needed an English education and sent him to live with a cruel foster family, the Holloways, while he attended school in Southsea. Mrs Holloway beat and bullied him and he struggled to fit in at school, finding comfort only in books.

At the age of 11, Kipling was on the verge of a nervous breakdown, so a family friend contacted his mother and she rushed over from India and removed him from the Holloways’ clutches.

After finishing his schooling in Devon, Kipling returned to India to work on a local newspaper. He also began to write short stories, and published a collection of them, entitled Plain Tales From The Hills, in 1888, just after his 22nd birthday.

As Kipling’s writing career burgeoned, he returned to England to great acclaim, having taken the scenic route to get there, via a long detour to North America.

The author’s arrival in London was met with great acclaim, and he met and became friends with American agent and publisher Wolcott Balestier, at around the same time as he published The Light That Failed.

Kipling fell in love with Balestier’s sister Carrie, and married her in London in 1891. The newlyweds moved to America and had a baby girl, Josephine, shortly after settling in Vermont in a house called Bliss Cottage.

It was in this cottage that Kipling began work on what would become the Jungle Books – he had an idea about a boy who was brought up by wolves.

In four years Kipling produced a series of Jungle Books, and a second daughter, Elsie, was born in 1896. His tales of and for children won huge acclaim, and by the age of 32, Kipling was the highest-paid writer in the world.

A legal scandal sent the Kiplings back to England, and another child, a son, John, was born in 1897. But tragedy struck when the Kiplings sailed back across the Atlantic to visit Carrie’s mother: Rudyard and his elder daughter became seriously ill with pneumonia, and the child died. It was said Kipling never got over the tragedy.

The Kiplings returned to England and the picaresque novel Kim was serialised in a magazine and then published in book form in 1901.

In 1902 Kipling bought Batemans, a house dating back to 1634. Here, the author began to find some happiness again, and published his Just So Stories, which he had crafted for his late daughter as he put her to bed. The name came from his daughter’s request for her father to repeat his stories for her just as he had first told them, or ‘Just So’.

In 1907 he won the Nobel Prize for Literature – the first English-language recipient – and in 1906 he published Puck Of Pook’s Hill and Rewards And Fairies, which contained the poem If, came in 1910.

In 1915 Kipling travelled to France to report on the First World War, and his son John, to whom he had become very close in the wake of Josephine’s death and for whom If was written, signed up with the Irish Guards thanks to his father pulling strings.

In October of that year the family heard John had gone missing in France but no trace of him was found. Kipling felt so guilty about encouraging his son to sign up, he went to France to search for him but no trace was ever found.

Kipling continued to write but, with two of his three children dead, had lost the will to write the children’s stories that had made his name. He died in 1936 and his ashes were buried at Poets’ Corner in Westminster Abbey.