A top Russian scientist with close links to Edinburgh University who was ‘working on a Covid-19 vaccine’ has been found dead in suspicious circumstances in St Petersburg.

Biologist Alexander ‘Sasha’ Kagansky, 45, best known for his work on fighting cancer, was reported to have fallen in his underwear from a 14th floor window of a high rise residential building.

He also had a stab wound on his body, according to Moskovsky Komsomolets (MK).

The news comes as seven Russian coronavirus patients plunged to their deaths from hospital windows earlier this year. 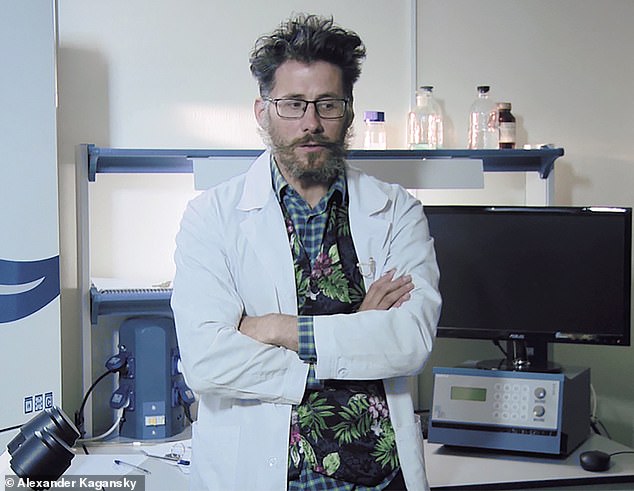 Biologist Alexander ‘Sasha’ Kagansky, 45, best known for his work on fighting cancer, was reported to have fallen in his underwear from a 14th floor window of a high rise residential building

The Russian Investigative Committee has opened a murder probe into the death of Dr Kaganksy and a 45-year-old male suspect has been detained.

Dr Kagansky – an assistant professor in Vladivostok – had been working in Edinburgh for 13 years until at least 2017.

He was lately Director of the Centre for Genomic and Regenerative Medicine at Russia’s Far Eastern Federal University in Vladivostok, where he continued research collaboration with the Scottish university.

MK reported that the academic had been ‘developing a vaccine against coronavirus’ and that he died ‘under strange circumstances’.

The report gave no further details about which of a number of international Covid-19 vaccines he was supposed to have been working on.

He had gone to St Petersburg to visit the graves of his relatives, and had gone to see an old school friend named Igor Ivanov, said one account.

Police believe there was a ‘scuffle’ before Kagansky fell, according to a report. 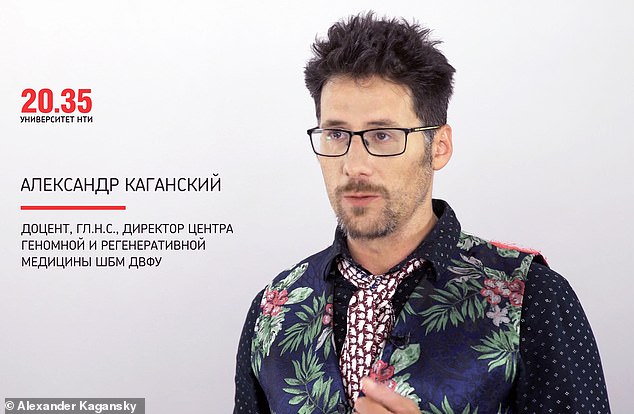 Dr Kaganksy’s murder brings the number of coronavirus-linked window falls in Russia to eight, all but one of them fatal

His body was found by a woman resident under a block on Zamshin Street in Russia’s second city in early afternoon yesterday (SAT). Law enforcement are investigating the circumstances of his death, say reports.

The committee said today a St Petersburg resident, aged 45, had been detained as a suspect, and a criminal case for murder had been opened following the discovery of the body ‘with signs of a violent death’.

He had recently received a Russian grant to study new ways of diagnosing and treating malignant brain tumours.

He was an advocate of research into the uses of herbs and mushrooms as potentially offering solutions in treating cancers. Earlier he had studied and worked in the US.

In 1991 as the USSR collapsed he was the first Russian delegate to the European Youth Parliament. He was also a member of Young Academy of Scotland.

Dr Kaganksy’s murder brings the number of coronavirus-linked window falls in Russia to eight, all but one of them fatal.

Nadezhda Salkova, age 74, fell in June from a fourth floor window of Semashko Hospital in Moscow where she was undergoing treatment for coronavirus.

She had been alone in a hospital room where she had been undergoing treatment for nearly three weeks, and the circumstances of her 40ft fall are under investigation by police.

Family members of other victims have suggested coronavirus sufferers are experiencing suicidal thoughts from drugs used to treat them, causing them to try and kill themselves. 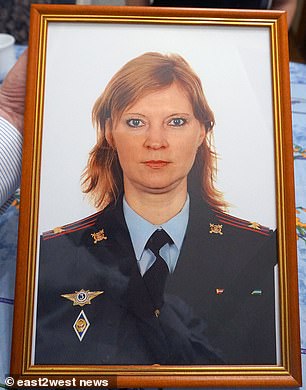 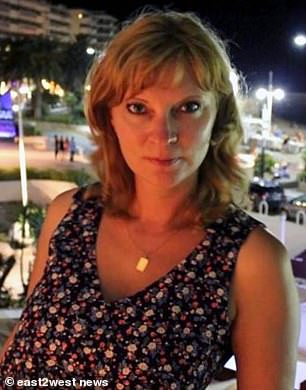 Ten days earlier, a 68-year-old man suffering from Covid-19 plunged to his death from a window in the intensive care ward of Veterans’ Hospital in Yaroslavl.

It has also emerged that a man, 49, with confirmed coronavirus fell 60ft from the window of a Moscow perinatal hospital which was reassigned to treat pandemic victims.

The family of police lieutenant-colonel Natalya Shcherbakova, 45, who died after a 50ft fall on 30 May, believe that drugs used to treat her coronavirus may have altered her state of mind.

She and her widower Konstantin were both senior police forensic experts, and her distraught family have called for checks on the medicines and their mind-changing impact. 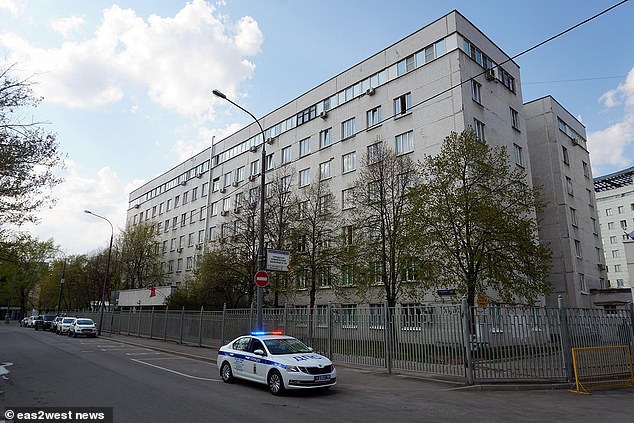 Mrs Shcherbakova fell from the fifth floor of this hospital, crashing through mosquito netting before suffering fatal injuries as she hit the ground 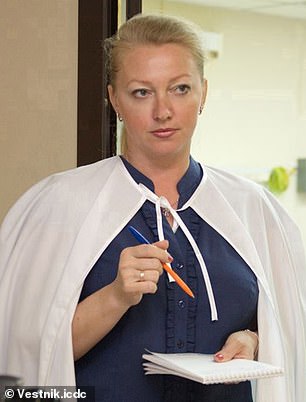 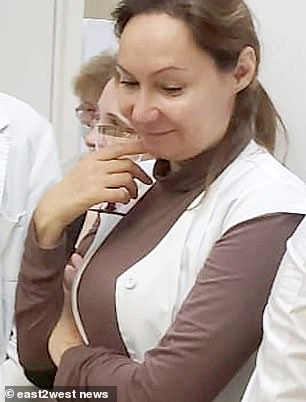 Levofloxacin is an antibiotic that is used to treat infections of bones, joints, ears and airways.

The drug has common side-effects that are often seen with antibiotics – including diarrhea, rashes, dizziness and heartburn.

However, it can also interfere with the nervous system of patients and cause a range of rare but mind-altering effects.

These include hallucinations, anxiety, paranoia and suicidal thoughts or behaviours.

Patients with a history of mental illness are considered more likely to suffer from these effects.

People with a history of seizures are also asked to inform their doctor, because the medication could also put them at risk of suffering more.

Shcherbakova had told a family member she was horrified about earlier Covid-19 hospital fall cases – all involving medics – and could not understand why they were happening.

Then she plunged to her death in exactly the same way.

Her family – including widower Konstantin, 61, and their twin daughters, 19 – are now seeking urgent answers about her death, which they say may have been caused by antibiotic levofloxacin that she was given before her fall.

The forensic expert began feeling ‘anxious that she could die’ and in phone calls to her family ‘her mood was going downhill’.

Yet a doctor told one of her daughters, who expressed concern at her mood swings, that she was not in danger.

‘She is completely fine, are you mad?’ said the medic.

On May 31, shortly before falling from the window, she had made herself a cup of tea and managed to eat, she told one of her daughters.

At 7.44pm she informed her family she was being put on a drip, a procedure which should have taken two hours. She was briefly online at 8.37pm.

At 11pm her husband and one daughter took a call from the hospital saying: ‘You know, she jumped from the fifth floor….’

She died soon afterwards despite attempts to save her.

She was ‘happily married’, close to her daughters, and a respected forensic specialist consulted by experts from across Russia. 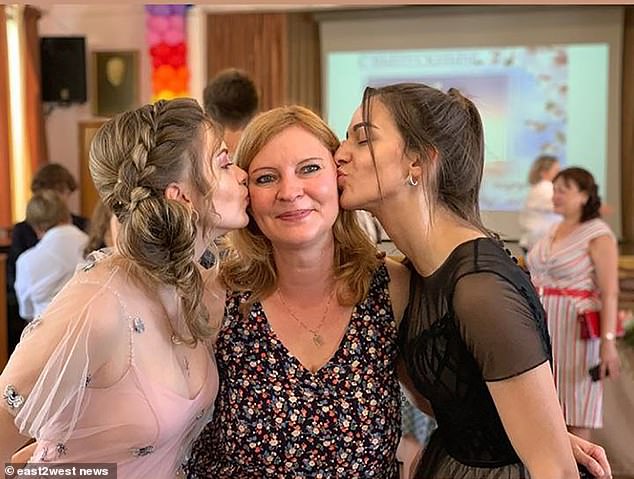 Natalya Shcherbakova, 45, fell 50ft to her death from a hospital window in Moscow on May 31 while being treated for coronavirus

The family have been told that she was being treated with antibiotic Levofloxacin.

The powerful antibiotic can be used to treat pneumonia, but in rare cases can interfere with the nervous system and cause serious psychological side effects.

These can include hallucinations, paranoia, anxiety and suicidal thoughts.

It is not known if other hospital window victims were treated with this same drug.

Dr Yelena Nepomnyashchaya, 47, a mother of two from a medical family, sustained fatal injuries after falling 50ft from a window at her Krasnoyarsk hospital.

She fell soon after complaining of an ‘acute shortage’ of PPE and died on 1 May, the only one of the victims who was not known to be suffering from coronavirus.

Dr Natalya Lebedeva, 48, was hospitalised with Covid-19 when she plunged 60ft to her death on 24 April after she was ‘unfairly blamed’ for the spread of coronavirus at her clinic in Star City, near Moscow, the training centre for cosmonauts. 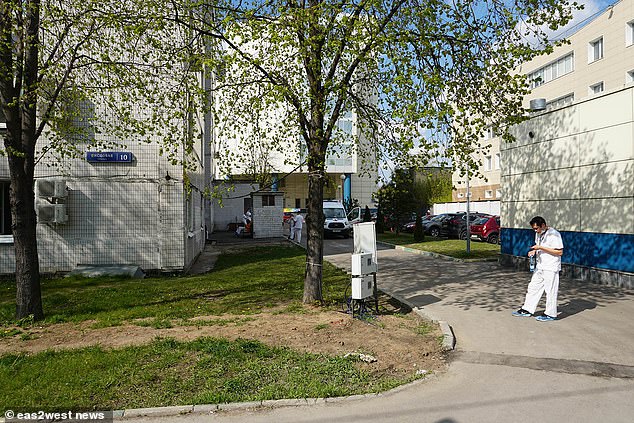 He was diagnosed with Covid-19 and had complained about PPE shortages and being made to work despite suffering from the virus.

His wife Maria Shulepova was banned from speaking to the media over the incident.

Lt Col Shcherbakova had been treated for coronavirus with antibiotic Levofloxacin, a drug which can trigger ‘suicidal thoughts and attempts’ as rare side effects, according to Russian sources.

Her family were told there were also traces of an unnamed antidepressant in her blood.

Close medical observation for two hours after taking this drug was recommended, her relatives were informed, but she had not been put under any supervision, say sources.

She is known to have been on a drip shortly before her fall. 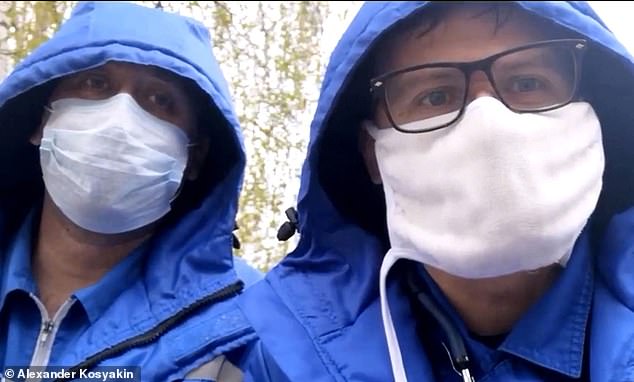