This is the shocking moment thieves broke into the house of a schoolgirl while she was having a lesson on Zoom and robbed her in front of her shocked classmates.

The attack on the girl, named as Maria Jose, took place while she was on the Zoom chat with 25 others including her teacher in the city of Ambato in Tungurahua, central Ecuador, on Friday.

The thieves were apparently unaware that their threats against the student were being filmed, which allowed her classmates to alert authorities and the victim’s family, and cops were able to detain four suspects after they fled the scene.

Video shows the moment the girl, seen in the video box located in the third column of the second row, was threatened by masked thieves after entering the residence.

Her classmates then alert the teacher who was speaking and had not noticed what was taking place.

One of the pupils says: ‘Does anyone have the address or the number of her parents?’ 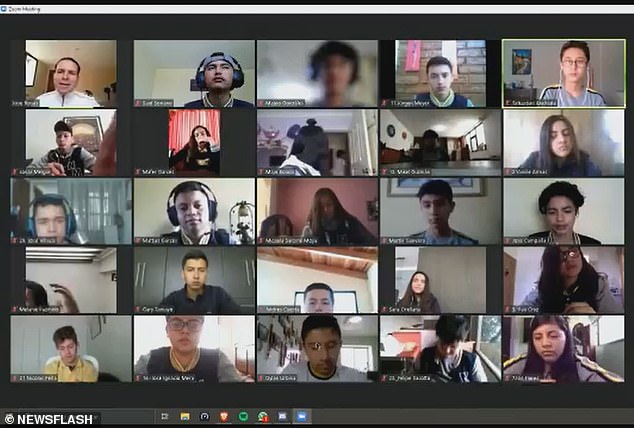 Video shows the moment the girl, seen in the video box located in the third column of the second row, was threatened by masked thieves after entering the residence 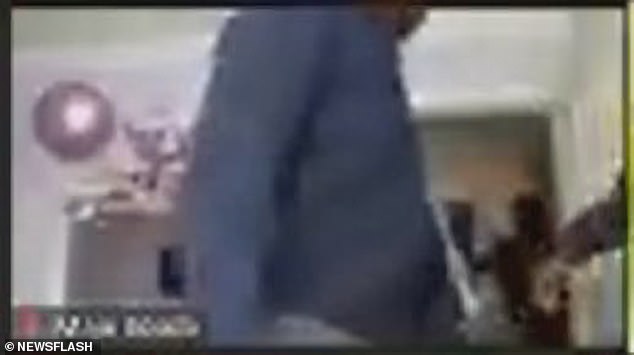 Another replies: ‘I have her mother’s number’.

A third classmate then says ‘call her straight away’.

The image appears to freeze on the screen after one of the thieves closed down the laptop in order to steal it together with other valuables from the property.

A police report from Ecuador Police read: ‘During this operation, units from the Organised Motorised Group (GOM) were dispatched and were informed of the criminal act upon arriving at the location.

‘The perpetrators of the robbery fled the scene in a motorised vehicle and thanks to the location of the mobile phones they robbed, they were located and captured in an area known as “Huachi Grande”.’

The four suspects that were arrested have been identified as Luis C., Valentin P., Carlos A. and Dorian R.

They were found in possession of a safe, £3,017 in cash, two guns, one puncturing weapon, two mobile phones, one laptop and one video games console.

The suspects have been placed under the custody of the appropriate authorities. It is unclear if they have been charged with anything as of yet.