Countries in Europe are increasing their deployments of armed forces in order to help combat the devastating impact the coronavirus is having on their societies.

There have now been over 270,000 confirmed cases across Europe, with over 16,000 deaths, according to the European Centre for Disease Prevention and Control. Both Italy and Spain have now overtaken China in total deaths.

Countries are working tirelessly to get the spread of the virus under control and throwing countless resources behind their healthcare systems which are under severe pressure from the numbers of people who need treating. 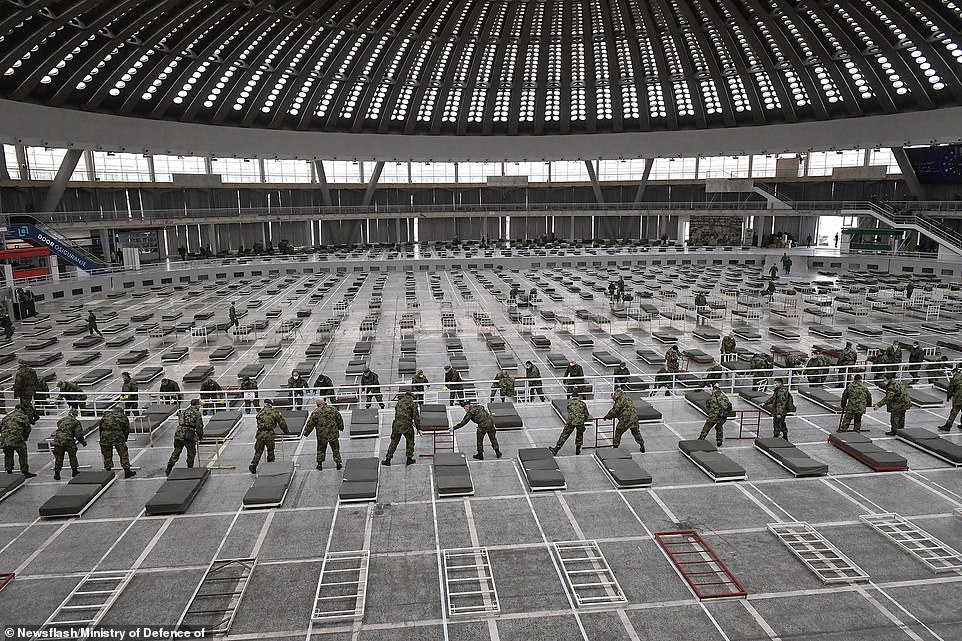 Serbian soldiers work quickly to convert an enormous convention centre into a field hospital that can hold 3,000 patients with mild symptoms

Images from both Serbia and France show how their governments are mobilising troops domestically to help their respective healthcare services fight the crisis by either relieving the pressure on the already over populated hospitals or moving people across the country quickly.

The first set of images show how the Serbian government has converted a huge convention hall into a makeshift hospital for a potential 3,000 coronavirus patients. Meanwhile, France will use flying hospital planes to evacuate patients from one side of the country to the other. 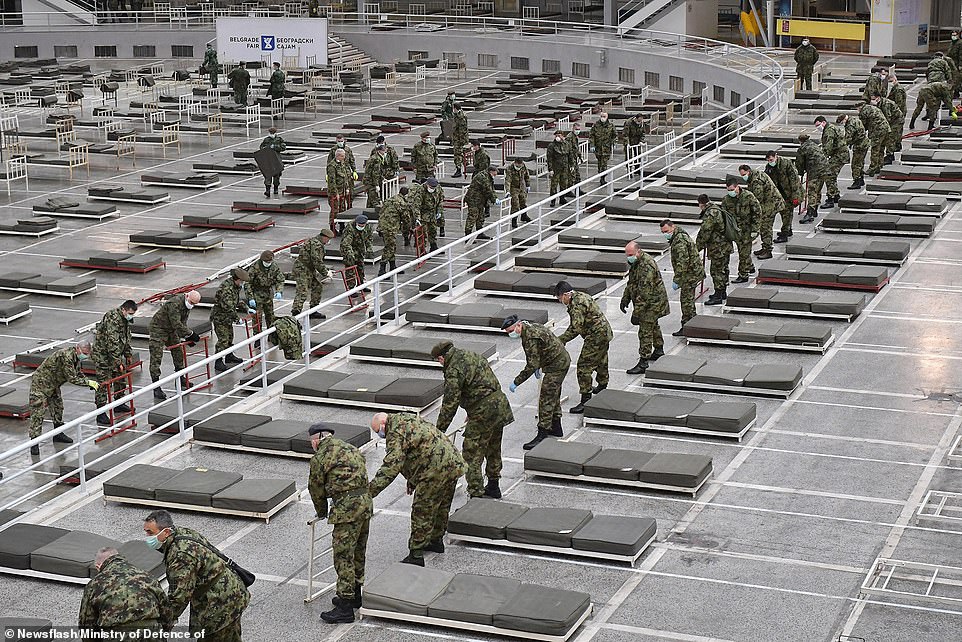 The Serbian Prime Minister said that he wants the temporary hospital in Belgrade to be more than just a ‘3,000 person bedroom’, and rather somewhere ‘better and more humane’ 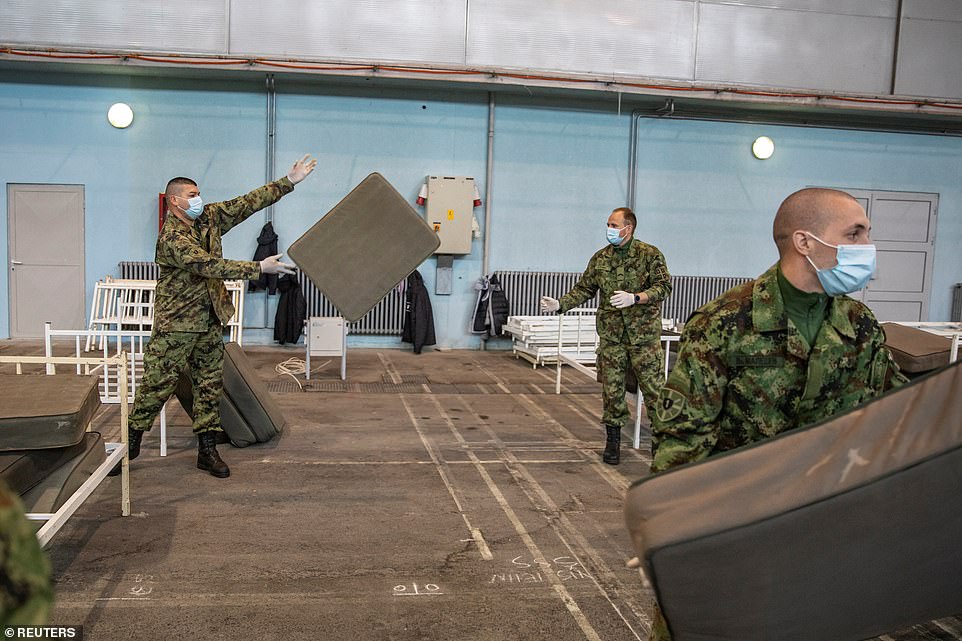 Serbian military personal throw a cushion to one-another which will be used in one of the 3,000 beds inside this makeshift field hospital

The Serbian Army has completed the adaptation of the largest hall of the Belgrade Fair located in the Serbian capital into a makeshift hospital with 3,000 beds.

Local media report the hall will be used for the reception and accommodation of people with the symptoms of COVID-19 and should be fully functional from today (Friday).

The Serbian government decided hopes the temporary hospital will help them deal with the spread of the virus more effectively and said there will be more around the country. 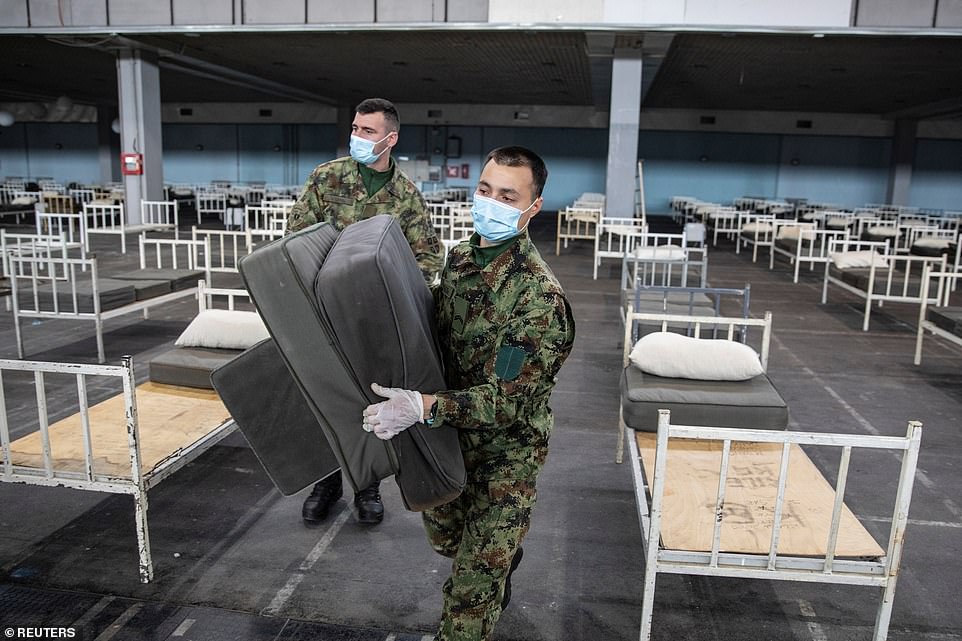 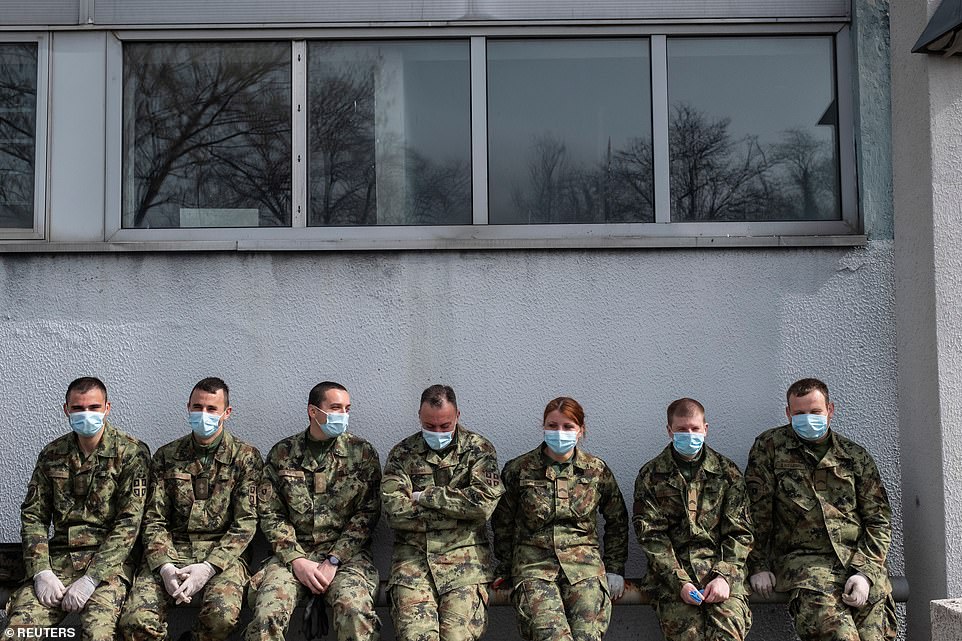 Outside the convention centre, soldiers and volunteers take a break from setting up beds inside

The Prime Minister of Serbia Ana Brnabic stated: ‘I saw comments asking why we are not using hotels? Because more police, military, security is needed that way. The second reason is that the whole intention is early detection, early treatment, to make everything more effective.

‘That is why it is important to have people in one place so that we can immediately detect who is not feeling well and if they have stronger symptoms. We believe that this is the way we will fight it effectively.’

According to local media, part of the adapted space will be divided into separate rooms that will host five to nine people at most.

Brnabic said: ‘We will have rooms for five to nine people, televisions, table tennis, and various additional facilities so people feel more comfortable. 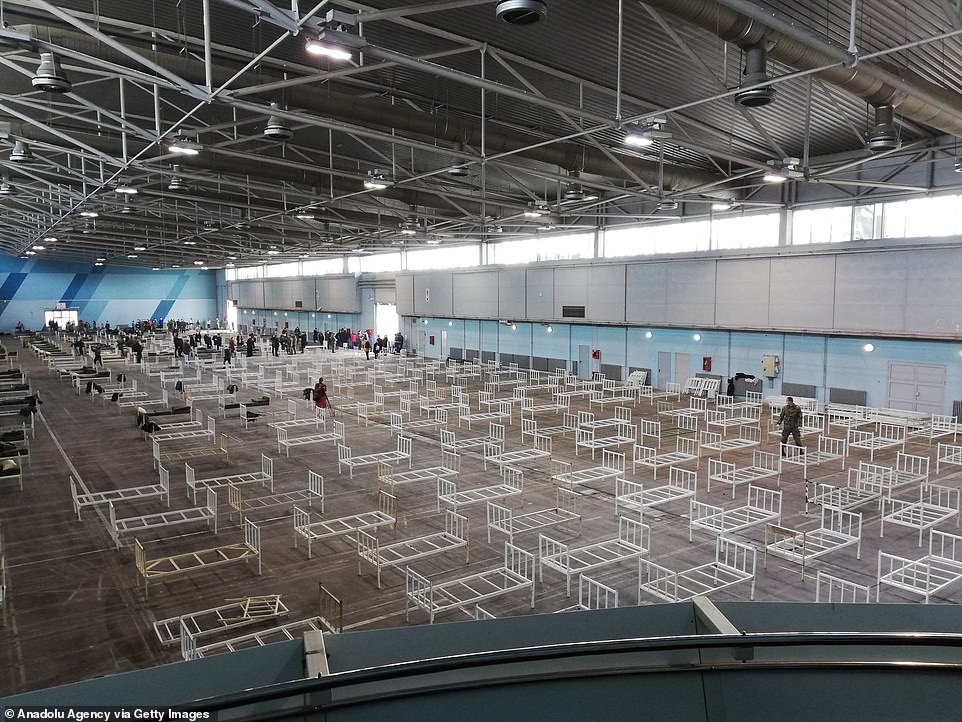 A photo showing the sheer scale of the operation. The Serbian PM has said there will be more field hospitals around the country set up soon

According to the Serbian government, the country has 457 confirmed cases and seven deaths.

The government has already asked for international aid for the battle against the virus, and have received medical staff help from China and Cuba, as well as received financial support from Norway and the European Union.

Meanwhile, Russia and UNICEF have helped the country by sending medical supplies and COVID-19 tests.

The FRENCH authorities will use their new A330 MRTT Phenix flying hospital planes to evacuate patients from the East of the country to the West as coronavirus cases surge.

The aircraft is not just a hospital. It can also be used to refuel fighter jets. The coronavirus crisis marks the first time the French are using it on national soil since it began service.

A330 MRTT Phenix flying hospital planes will evacuate people from the East of France to the West. The aircraft cal also be used to refuel fighter jets 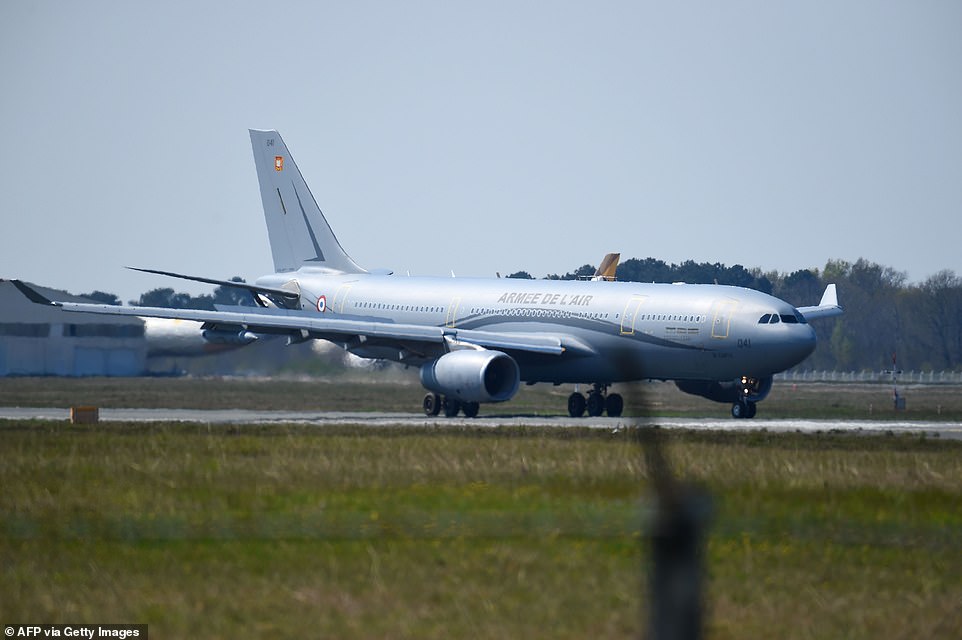 With its special MORPHEE medical configuration, the plane can transport 12 patients lying down over a distance of over 10,000 kilometres.

The French Minister for the Armed Forces, Florence Parly, 56, said: ‘The Airbus A330 will repeat, as it has done three times, an operation which is intended to relieve Mulhouse hospital.’ The six patients it is transporting are headed from a hospital in Mulhouse to a Bordeaux hospital today.

Inside the military plane, army medics can be seen treating patients who are being evacuated from one side of France to the other. The plane can fit 12 people lying down 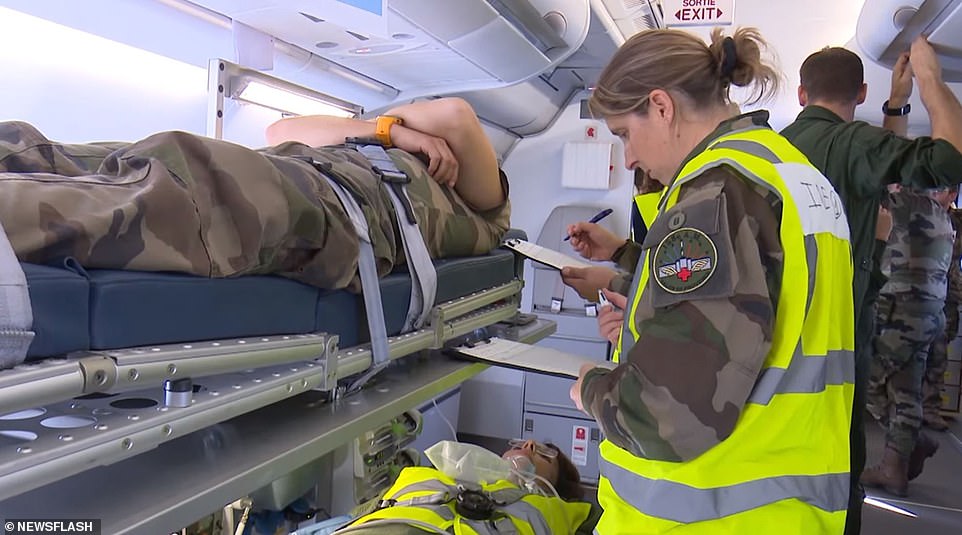 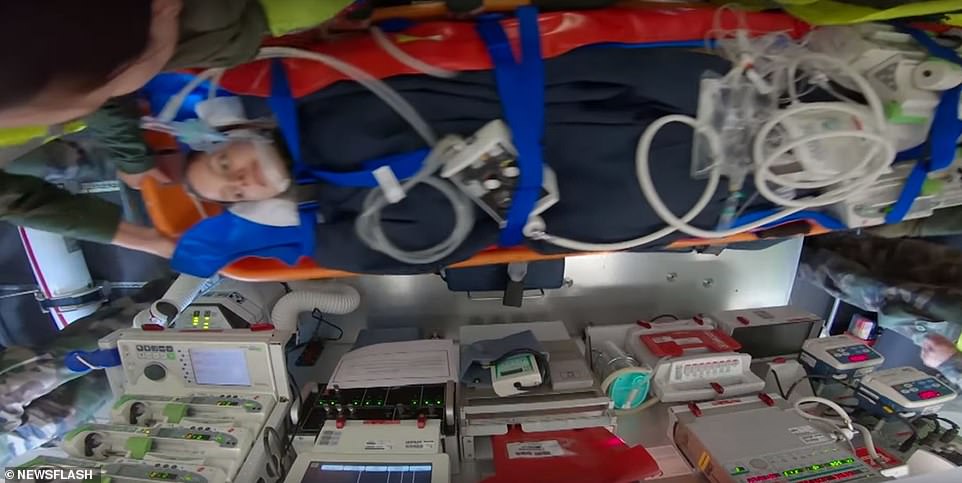 This will be the fourth time the French use their plane in recent days to ferry people suffering from the coronavirus. Others had been evacuated to Marseille, Toulon and Brittany last week.

With its maximum payload of 45 tonnes and its transport capacity of over 100 tonnes of fuel, the A330 Phoenix has been chosen by the French army to refuel its Rafales fighter jets. A total of fifteen A330 MRTT Phoenix aircraft are set to enter service with twelve already funded. Six are scheduled to be delivered by 2022, the remainder by 2024. By October 2019, the first two Phenix planes had been put into operational service.

These images were shared by the Air Force on 20 March to show off the inside of the plane after the first missions.

According to the latest data from the Johns Hopkins University, France has 29,155 cases and 1,696 deaths.

Field hospitals are up all over the globe

Serbia are not the only ones quickly establishing field hospitals to deal with the overwhelming number of people falling sick because if the coronavirus. Iran and Italy, two of the world’s worst hit nations by the virus have set up military hospitals to ease the burden on their healthcare services. 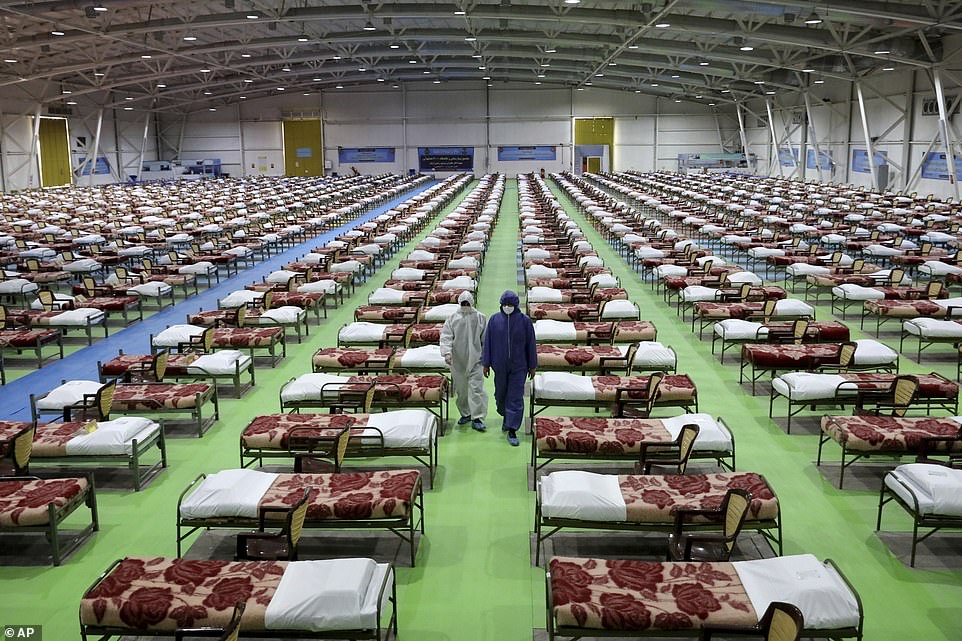 IRAN: A field hospital that will hold 2,000 patients set up in the international convention centre in Northern Tehran 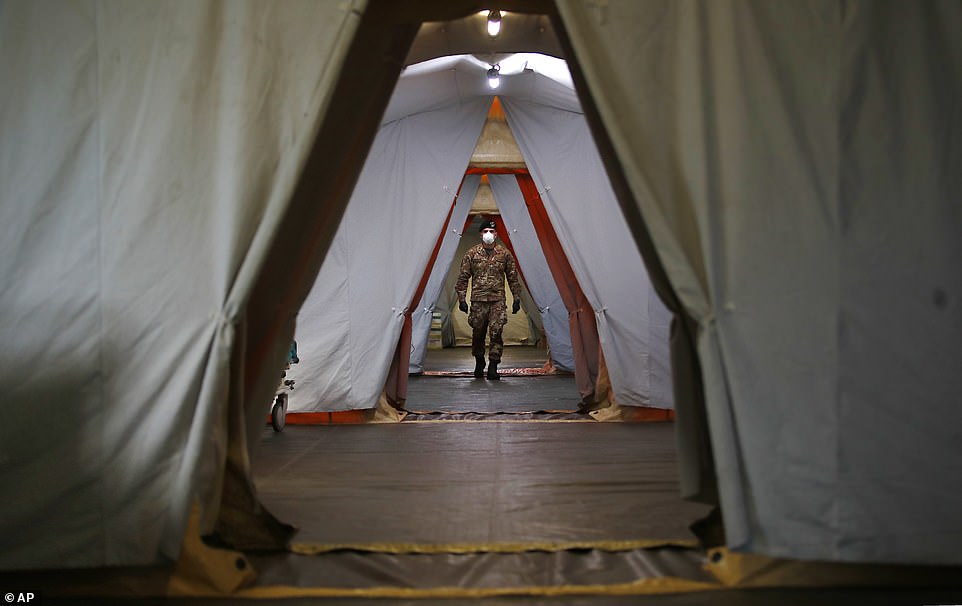 ITALY: A soldier walks through a makeshift corridor in a field hospital in Crema, Italy 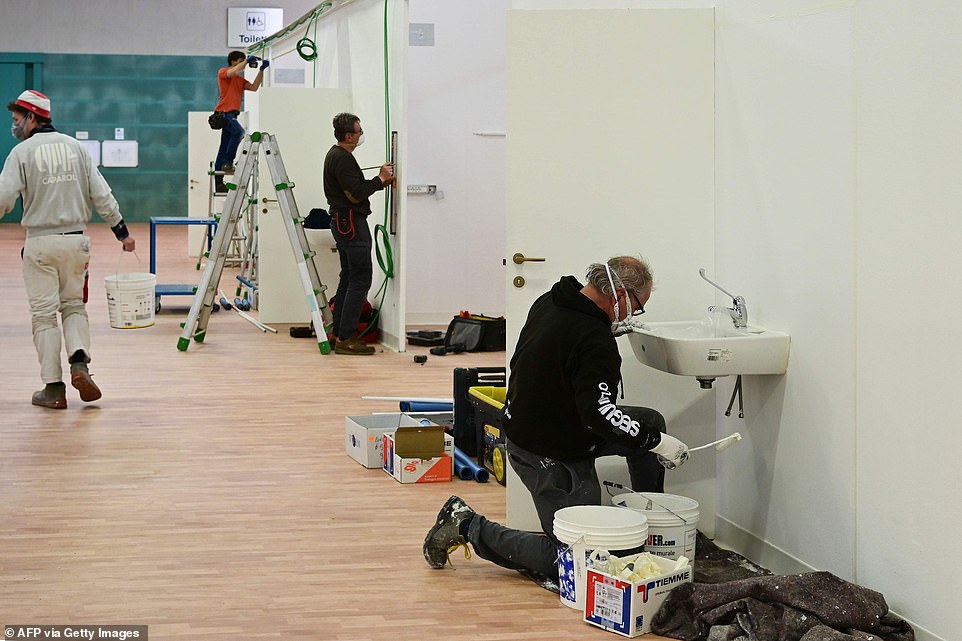 ITALY: Volunteer artisans, Civil Protection workers and members of the National Alpine Association are working in Bergamo, the Italian epicentre of the coronavirus, to build a field hospital for patients

Other countries, such as Spain, France, Sweden, the US and the UK are all either converting large public centres into field hospitals, or setting up temporary structures to house the influx of people expected in the coming weeks. 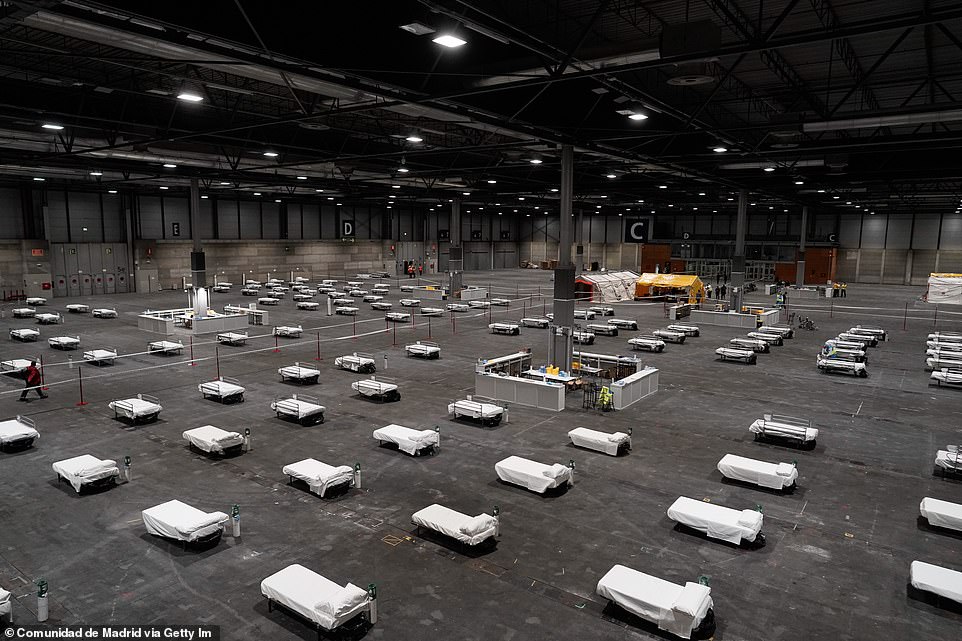 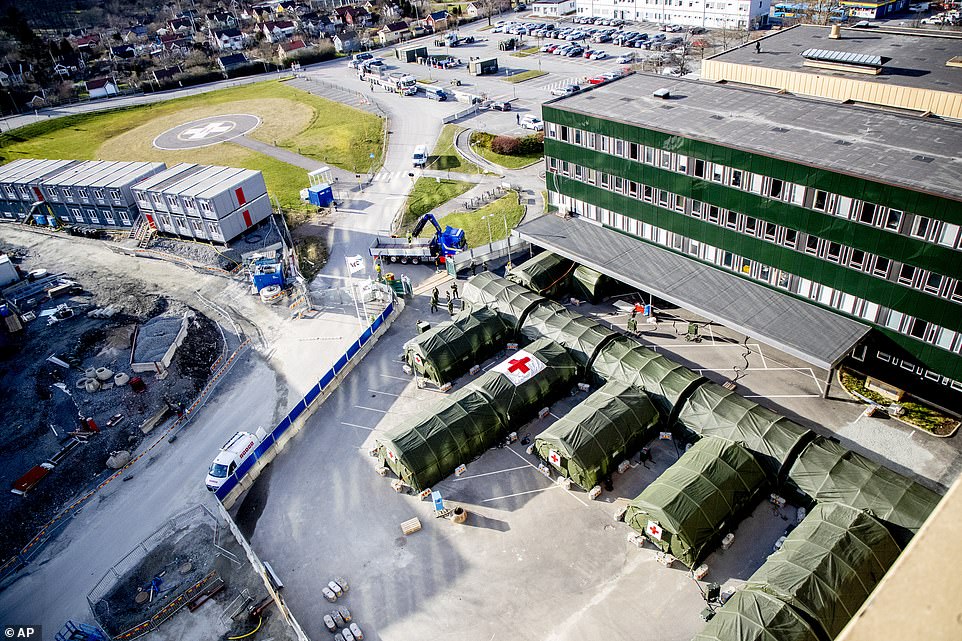 SWEDEN: An aerial view of the military field hospital being constructed at the Ostra Sjukhuset hospital area, part of Shalgrenska Unversity hospital, in Gothenburg 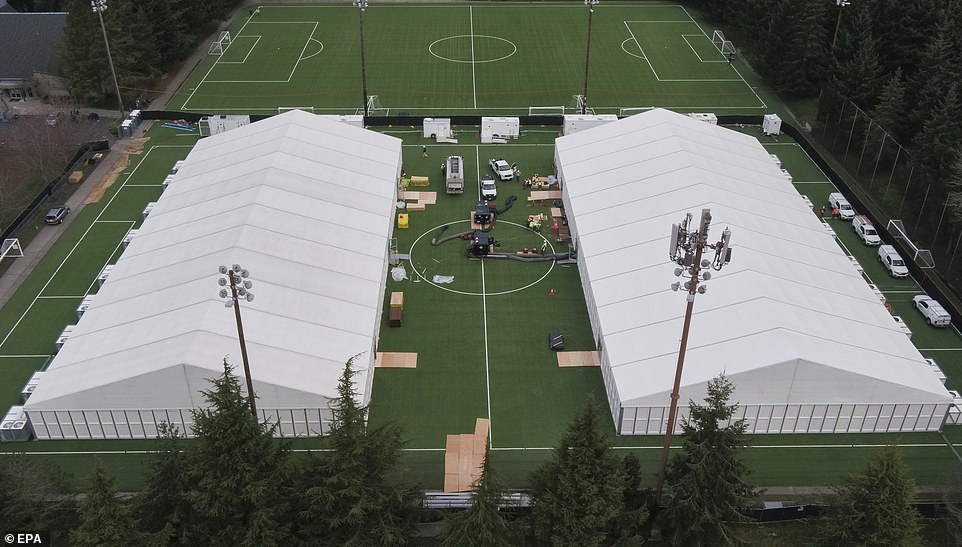 USA: A football pitch is used for the site of a temporary field hospital in Shoreline, Washington 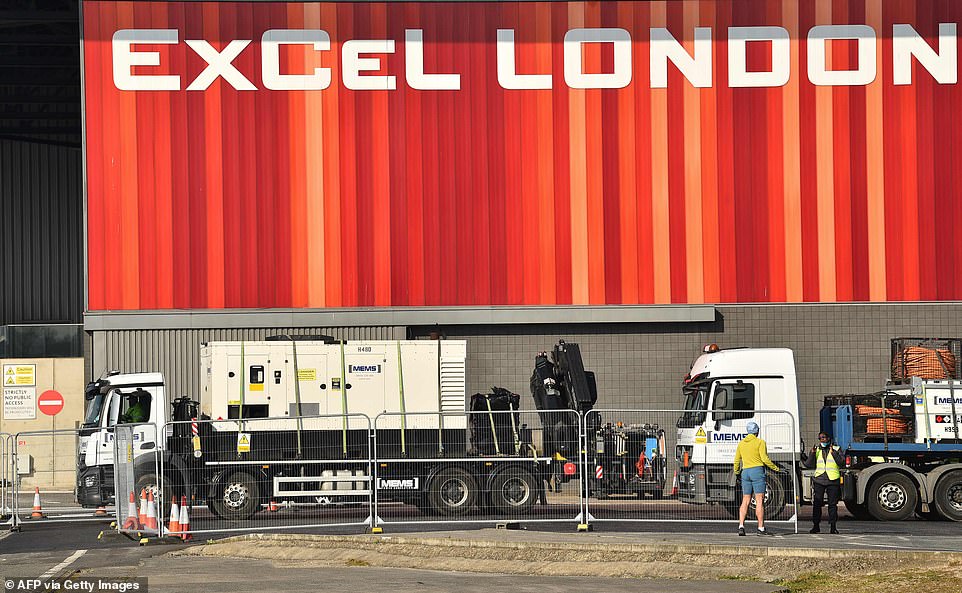 UK: The ExCel centre in London is currently being turned into a temporary field hospital to house coronavirus patients in the UK’s capital city as numbers continue to rise

Famously, China, the country where the coronavirus originated, built a huge temporary hospitals in just six days in the Hubei province, where Wuhan is, China’s virus epicentre. 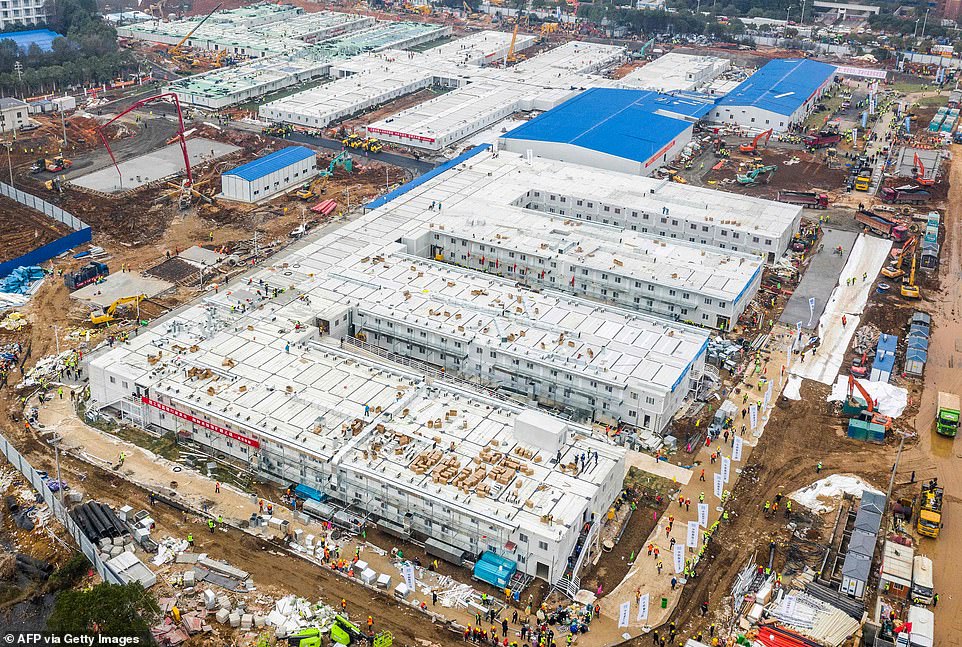 CHINA: This aerial photo shows the Huoshenshan hospital, which means “Fire God Mountain”, after being handed over to China’s army in Wuhan in China central Hubei province 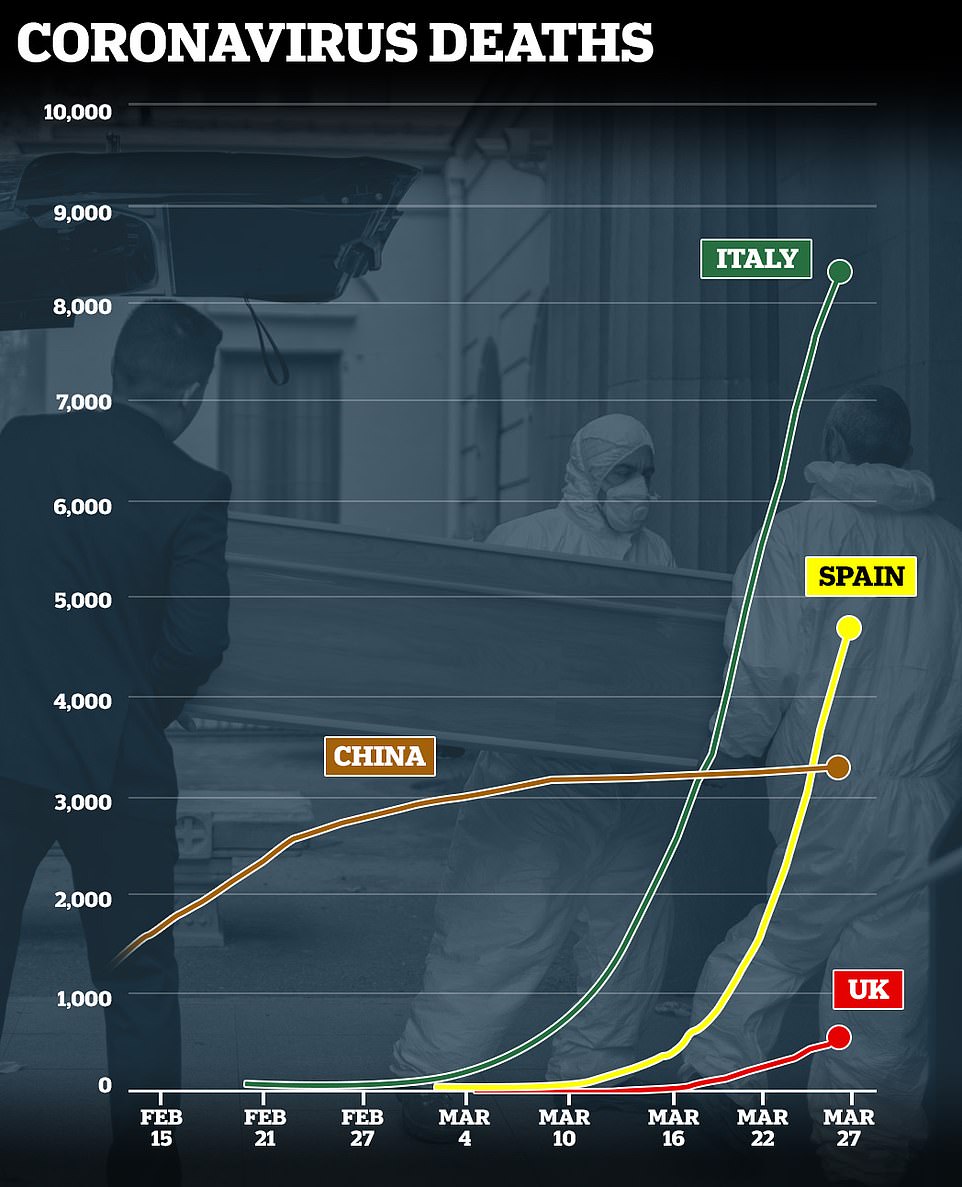 European deaths rise: This graph shows how the number of deaths in both Italy and Spain have overtaken the number of people who have died from the coronavirus in China