Almost two-thirds of students say their mental health got WORSE under the university campus lockdown that left them paying £9,000 a year to stay shut in halls and not allowed to party or go to lectures

The mental health of university students has plummeted with almost two thirds now saying they are more unhappy now than when the academic year began.

Students have faced a torrid year that has included long periods locked in their halls of residence amid outbreaks of coronavirus on campuses.

They have were were closed down completely at Christmas, but students were still left to foot the bill for their courses and accommodation.

A study by the Office for National Statistics found a higher proportion of students (63 per cent) have reported a worsening in their wellbeing and mental health since the start of the academic year, compared with 57 per cent when polled in November.

Nearly two in five (37 per cent) students reported being ‘dissatisfied’ or ‘very dissatisfied’ with their learning, compared with 29 per cent in November, according to an Office for National Statistics (ONS) survey.

The findings came as the majority of university students in England have been told to stay at home and not return to campus until at least mid-February.

Thousands spent the autumn term locked in their halls of residence and unable to socialise or go to lectures.

And now a number of universities have taken the decision to continue with their offer of online lessons for the majority of courses until even later in the academic year amid the tighter coronavirus restrictions.

Earlier this month, students forced to work from home following Boris Johnson’s latest lockdown ruling revealed their fury over paying rent and bills for accommodation they’re no longer allowed to be in. 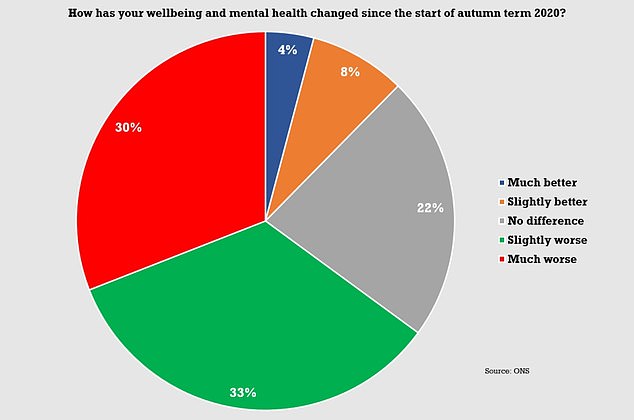 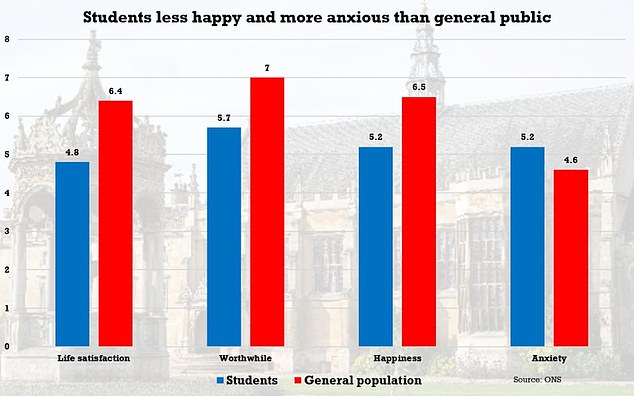 Thousands of students detailed on social media the hundreds of pounds they’re paying every month in hall fees and to private landlords plus regular bills such as gas, water and electricity.

One mother recounted how her daughter’s housemate was forced to return periodically to their student house to ensure the heating remains on for fear of breaking the lease if pipes freeze up on the property.

The survey, of more than 2,600 students in January, suggests that 60 per cent of the students who travelled to stay with family or friends over Christmas have not yet returned to their university accommodation, while 40 per cent have returned.

Tim Gibbs, from the public services analysis team at the ONS, said: ‘The most recent data collected from the Student Covid-19 Insights Survey show a further decrease in students’ average life satisfaction scores, with almost two-thirds of students reporting a worsening of their mental health and wellbeing.

‘These numbers are not surprising considering the new lockdown measures in place and the fact that many students have not yet returned to their university town or city.

‘This is also reflected in the academic experience scores, with the number of students reporting dissatisfaction showing an increase since the last report.’

More students whose term-time living arrangements have changed since the start of the autumn term said that their mental health has worsened (73 per cent), compared with those whose arrangements stayed the same (62 per cent).

The survey, carried out between January 8 and 18, found that more than half (56 per cent) reported being ‘dissatisfied’ or ‘very dissatisfied’ with their social experience since the start of the autumn term.

It came amid hopes that Boris Johnson could unveil a roadmap out of lockdown within weeks if coronavirus cases keep easing – as ministers today insisted the government took the ‘right decisions at the right time’ despite the UK passing the grim milestone of 100,000 deaths. 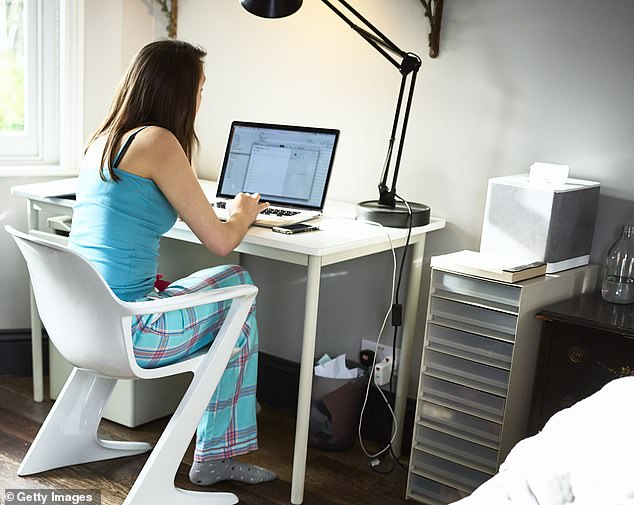 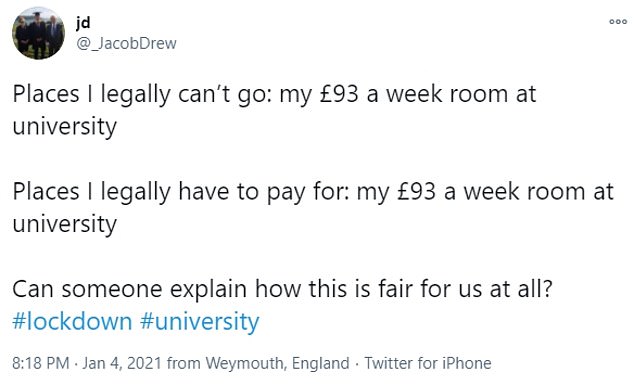 The blueprint, which Tory MPs have been demanding for weeks amid fears about havoc being wreaked on the economy, is expected to be published by February 15, when ministers will review the draconian measures in force to get the mutant strain under control.

News that work on the exit strategy is under way came after Prof Chris Whitty provided a small but much needed glimmer of hope – saying he believed the UK had reached the peak of the latest wave.

The chief medic said cases were falling fast – down from 68,000 cases recorded on January 7 to just over 20,000 yesterday. The figure is the lowest it has been since December, while the vaccine rollout is gathering speed.