Six times as many illegal migrants are arriving on the Canary Islands compared to last year as increased security in the Mediterranean is pushing them to try the more dangerous Atlantic crossing.

Illegal migration to the chain of volcanic islands in the Atlantic Ocean, west of Morocco, has risen over six-fold this year compared to the same time last year, to 3,448 people as of August 16, according to Spanish interior ministry data.

Last year just 556 had reached the islands by mid-August.

The move followed an agreement with the European Union, which has struck similar deals with other nations, such as Libya and Turkey, that have long served as launch pads for attempted crossings of the Mediterranean to Europe.

‘If you move them away from the north, you push them south. And the Canaries are in the south,’ Santana said. 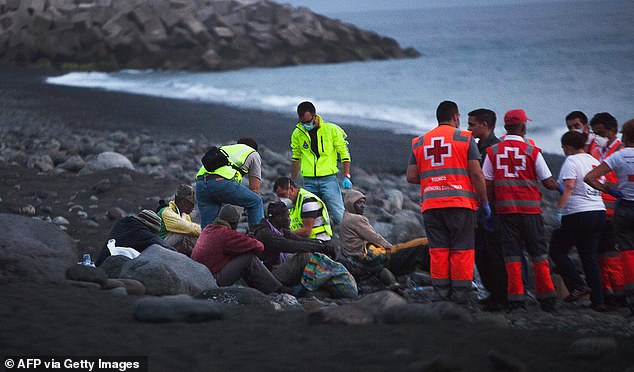 In this file photo taken on June 30, 2014 members of the Red Cross tend to would-be immigrants upon their arrival in Tazacorte, on the Spanish Canary Island of La Palma

‘This (the Atlantic) is a much longer crossing, which increases the number of deaths,’ said Maria Greco, of Entre Mares, a migrant rights group based in Fuerteventura, the Canary island closest to Morocco.

‘The Atlantic is not the Mediterranean. It is a very complicated ocean. The distance, the disorientation, and the currents make it far more dangerous.’

A total of 239 migrants have died trying to reach the Canaries between January 1 and August 19, compared to 210 during all of last year, and 43 in 2018, according to the International Organization for Migration (IOM).

But the actual number of deaths is much higher, Santana believes.

He estimates that one migrant dies for every 16 who reach the archipelago alive.

‘People set off on packed, shaky boats which are driven by people without experience,’ he said.

The archipelago has been a hotspot for migrants before – in 2006, some 30,000 migrants managed to reach the Canary Islands before stepped-up Spanish patrols then slowed the pace.

‘Before, they came in more robust and stable boats. Everything has deteriorated. Boats are fragile, without captains, sometimes they don’t even give them a compass,’ Greco said. 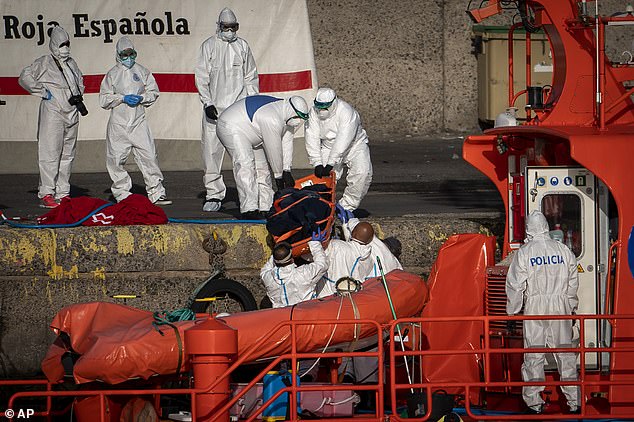 Emergency services carry the dead body of a migrant rescued by the Spanish Maritime Rescue Service, at the Arguineguin port in Gran Canaria island, Spain last Friday. A total of 239 migrants have died trying to reach the Canaries between January 1 and August 19

The boats depart not only from Morocco and Mauritania, the two nations closest to the archipelago, but also from Senegal and Gambia, over 600 miles further south.

But some arrivals have originated from as far away as South Sudan and the Comoros Islands in the Indian Ocean, she added.

The pandemic is no deterrent.

‘When people decide to get on a boat, risking their lives and those of their children, the pandemic is not something that weighs much on their decision,’ said Jose Javier Sanchez, of the Spanish branch of the Red Cross.

Migrants who arrive are tested for COVID-19 and anyone found to be infected must quarantine.

Spain’s migrant reception centres ‘were not ready for quarantine… with rooms for six, eight people and a shared bathroom. Now we have smaller rooms with private bathrooms. It’s a challenge,’ Sanchez said.

Migrant rights groups complain that the government is not processing asylum requests fast enough and often does not inform migrants of their rights when they arrive.

The Spanish government argues that it is dealing with a surge in asylum requests but is doing all it can to process them efficiently.

Santana also urged the government to speed up the transfer of migrants from the archipelago to mainland Spain, to make room for an expected rise in arrivals in September, when winds are usually more favourable for the crossing and waters are calmer.