Smaller aged care facilities and those owned by government are much more likely to offer the highest quality care, according to Australian research to be released on Thursday.

Only 11 per cent of Australia's 2700 aged care facilities were rated as providing a high quality of care, the research commissioned by the Royal Commission into Aged Care Quality and Safety found. 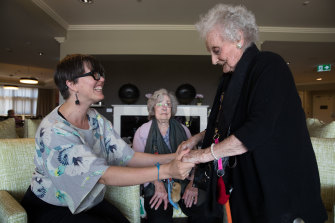 Kiama’s council-run nursing home, Blue Haven, has fewer residents than most, with residents clustered around a central hub. Credit:Janie Barrett

It estimated that providing the highest quality of care that's found in homes with fewer residents to all 200,000 residents in facilities would cost an estimated $3.2 billion more than the $18 billion spent by the federal government on aged care in 2018. A less expensive option would be to improve quality within the existing structures, which would cost $620 million more a year.

Researchers from the University of Queensland found that as aged care facilities increased in size, quality declined.

About 41 per cent of care homes with 15 or fewer places provided high quality care, and none were found to offer poor quality care. In contrast, none of the largest facilities, with more than 200 residents, met the criteria for the highest quality of care.

About a quarter of government-run facilities offered the highest quality care, compared to only four per cent of those operated by for-profit providers.

The royal commission has also released a range of submissions on how to fund reforms to a system it described last year as a "shocking tale of neglect".

Many groups backed the introduction of a Medicare-style levy to provide universal aged care. Some supported the use of government-funded homes which usually have more staff and higher ratios for nurses. These homes have had far fewer cases of COVID-19 than in Victoria.

Researchers broke the 2700 aged care facilities around Australia into three clusters: 11 per cent were rated as providing the best quality care, 78 per cent fell in the middle, and 11 per cent offered the worst quality care.

The best quality homes: met accreditation standards; were less likely to use high-risk medicines including sedatives, antipsychotics, opioids and antibiotics; had fewer complaints; and had higher customer experience ratings.

The researchers used detailed financial data, occupied bed days, and quality indicators, and combined it with data from a University of Wollongong study that looked at the relative health needs of residents.

Commissioners Tony Pagone,QC, and Lynelle Briggs said the research showed higher funding was needed just to meet basic standards. Even more funding would be required to provide the highest quality care. “Australians expect that all are entitled to the best quality level of care in aged care homes," they said.

Associate Professor Tracy Comans, a health economist from the Centre for Health Services Research at the University of Queensland, said the research showed smaller homes provided higher quality care, but they also had higher costs.

"What are we prepared to pay for higher quality care, because someone has to pay for it? " she said.

The research found the sector was efficient, spending what it was given. However, some aged care facilities operated in the red.

While punitive measures were in place for those facilities that failed to meet existing quality and safety standards, Professor Comans called for incentives for those which excelled.

And while there was a strong correlation between the size of the facility and government ownership, Professor Comans said it was important to note that many for-profit operators and larger facilities also provided "good" and "high quality" care. About 82 per cent of for-profit homes fell into the middle category, as did 81 per cent of homes with 121 to 200 residents.

Aged and Community Services Australia (ACSA), representing not-for-profit providers, also backed reforms underpinned by an "earmarked" Medicare-style levy. Its submission said 60 per cent of operators were experiencing a loss, rising to 74 per cent in regional areas.

In its submission, the United Workers Union supported universal access to aged care funded by the federal government, saying many workers in aged care facilities wouldn't be able to afford care when they needed it.

The UWU said previous research had shown for-profit providers were likely to provide lower care. "The current COVID-19 crisis in private aged care in Victoria had raised further questions about care quality and accountabilty in private aged care," it said.

The most important news, analysis and insights delivered to your inbox at the start and end of each day. Sign up to The Sydney Morning Herald’s newsletter here,  The Age’s newsletter here, Brisbane Times‘ here and WAtoday’s here.