The Taliban on Thursday accused the U.S. of violating the peace deal reached under the Trump administration by keeping members of its recently announced interim government on the U.S. most wanted list.

Sirrajudin Haqqani, who was named by the insurgent group as acting interior minister earlier this week, is known as the leader of the Haqqani Network — a designated terrorist organization by the U.S. and sanctioned under the United Nations.

Haqqani is wanted in connection with a 2008 attack on a hotel in Kabul that killed six people, including one American. 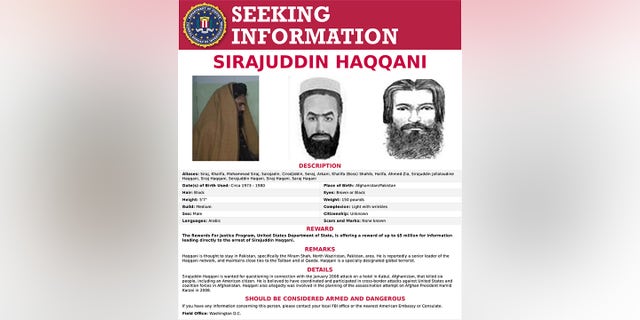 The ‘Seeking Information’ poster issued by the U.S. Federal Bureau of Investigation for Sirajuddin Haqqani, who is Afghanistan’s newly appointed acting interior minister. (FBI/Handout via REUTERS)

“The Islamic Emirate considers this position a clear violation of the Doha Agreement, which is not in the interest of either the United States or Afghanistan,” Taliban spokesman Zabihullah Mujahid said in a statement on Twitter.

“Such remarks are a repetition of past failed experiments and America’s detrimental position,” he added. “We demand that this misguided position be changed to a diplomatic one as soon as possible.”

A State Department spokesperson confirmed that the designation of Haqqani as “terrorist” is not a violation of the Doha Agreement.

Former Secretary of State Mike Pompeo, who oversaw the U.S.-Taliban deal, also told Fox News any sanctions against the insurgent group are “consistent” with the agreement.

“The Doha agreement was plain. All U.S. commitments were contingent on the Taliban living up to the premises it signed off on in the agreement,” Pompeo said. “We had leadership figures sanctioned from Feb. 29, 2020 on, and we didn’t lift one sanction during our administration.

“We would never have done so until all conditions were met,” he added. “Since the conditions have clearly not been met, continued sanctions on terrorists connected to the Taliban are entirely consistent with the agreement.”

In a Wednesday press briefing, Secretary of State Antony Blinken said he was “concerned” by the individuals listed under the “caretaker” government, and said the administration was “assessing” the announcement.

“Despite professing that a new government would be inclusive, the announced list of names consists exclusively of individuals who are members of the Taliban or their close associates, and no women,” he told reporters. “We’re also concerned by the affiliations and track records of some of those individuals.”

Blinken said the department will judge the Taliban-run government by “its actions.”

“The international community has made clear its expectation that the Afghan people deserve an inclusive government,” he added.

The secretary urged the Taliban to allow the continued evacuation of Americans and at-risk Afghans stuck in the country.

But the administration has remained mum on what consequences the Taliban can expect if they do not permit continued evacuations and it remains unclear how many people are still trying to flee the collapsed state.