State primary schools are putting off building new playgrounds and fixing run-down sports facilities this year after cancelling fetes that often raise tens of thousands of dollars from the community.

Coronavirus restrictions have put a stop to fetes and fairs that are typically a government school's biggest source of community cash for student facilities. 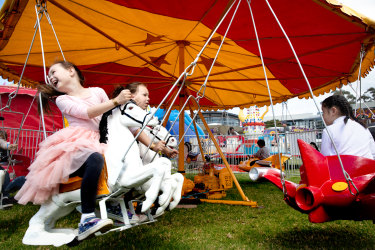 Children at a fair in Sydney last month. Melbourne schools have had to cancel fetes this year, losing important funding. Credit:Edwina Pickles

Beaumaris North Primary in Melbourne’s south-east generally raises between $65,000 and $80,000 at its biennial fete, which was originally scheduled for March, before being postponed to December and then ultimately cancelled.

Previously, the school used funds raised at its fete to put airconditioning in classrooms. This year it hoped to raise $65,000 for a new junior playground and to repair the cracked surface of its netball court, principal Sherril Duffy said.

Instead, it is at least $10,000 out of pocket for the amusement rides it booked and must wait two years for its next big fundraiser.

"We have an agreement with the local principals in our network – we all hold them on alternate years so we don't clash with each other," Ms Duffy said.

"We will have to wait for our next fete in 2022. It might be just a bit of polyfilla [on the netball court] until we get there."

Gail McHardy, executive officer at Parents Victoria, said the mass cancellation of fetes and carnivals would have a huge financial impact on many public schools, some of which count on them to cover essentials.

"Such a large proportion of public schools rely on these monies not only for the educational "extras" for their students, but to contribute to operating budgets and to support those with the least in their schools," Ms McHardy said.

They wouldn't have to do this if governments funded schools to 100 per cent of the school resource standard, she said.

"An equitable system would level out the opportunities for all students and do away with the reliance on local communities for fundraising dollars."

The school resource standard is an estimate of how much public funding a school needs to meet its students' educational needs.

According to a report commissioned by the Australian Education Union, combined state and federal funding for schools between this year and 2023 will fall $19 billion short of meeting the standard.

Funding for Victorian public schools, which get 87 per cent of the resource standard, will fall $5.45 billion short, the report calculated.

The report's author, education economist Adam Rorris, said the standard was the target amount of money required for students to achieve minimum numeracy and literacy standards.

"It's the real tangible stuff that a student can benefit from every day, without even looking at the condition of the building, or whether it's got a good playground," Mr Rorris said.

Under a funding agreement signed between the Morrison and Andrews governments last year, funding for Victorian public schools will rise to 95 per cent of the standard by 2029.

Anne-Maree Kliman, president of the Victorian Primary Principals Association, said coronavirus restrictions had helped some schools save on utility bills and salaries for emergency relief teachers.

Many schools in lower socio-economic communities also do not have fetes, she said.

"There are some schools that don't get the opportunity to fundraise because … you can't ask people that don’t actually have money to be chipping in all the time."

Kate Barletta, principal of Essendon North Primary, said the lost opportunity to unite the community was as disappointing as the missed chance to raise money for upgraded play spaces.

The school had hoped to celebrate its 100th birthday last month with a fair, but settled for a virtual party instead. The children were sent a birthday card, balloon and party hat in the mail.

"We still made the most of it. I guess it's just become about connecting with our community rather than the fundraising element of it," Ms Barletta said.

A spokesperson for the Department of Education said schools were able to raise funds in line with coronavirus restrictions, including online events and activities.

"The Department is offering support to any schools that may experience any cash budget shortfalls during the pandemic,” the spokesperson said.