A Chinese middle school student has reportedly stood trial for attempted murder after allegedly throwing a younger pupil off a four-storey balcony during an argument outside a classroom.

The underage suspect, believed to be 15 years old at the time of the incident, is facing up to 10 years in prison, according to Chinese media.

The victim sustained severe wounds after falling four storeys to the ground and could be left disabled for life by the assault last September, his father told the press.

Both the perpetrator, Huang, and the victim, Wei, studied at the Anyang Middle School in Du’an Yao Autonomous County of southern China’s Guangxi Province.

Year-nine student Huang, who was said to be 6ft 3in in height, allegedly picked up 5ft 3in Wei by grabbing Wei’s neck and crotch on the morning of September 16 last year.

It is said Huang then threw Wei, who was a year younger, over the railing of a school building in front of other shocked pupils, reported Chinese news site Purple Cow, which is affiliated to state-run Yangtse Evening News.

The pair had been quarrelling and fighting, which caused Wei to fall from the school building onto the running track, according to the Du’an Education Bureau.

The authority said Wei was taken to a local hospital for emergency treatment before being transferred to the People’s Hospital of Guangxi the next day for further medical attention. 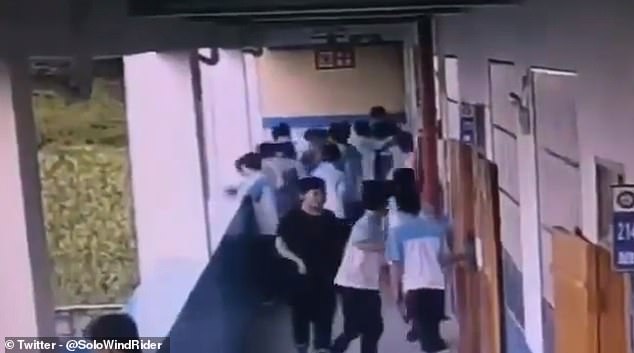 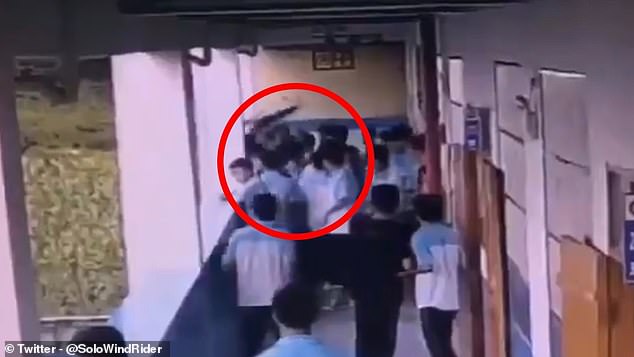 The suspect grabs the victim and throws him down the school building on September 16, 2019

Wei’s father told Purple Cow News that he had spent more than 200,000 yuan (£23,000) treating his son and he was worried about his family’s mounting debts.

The parent said his son had left the hospital. He claimed the boy could walk, but doctors warned that he might not be able to sit for a long period for the rest of his life.

Wei’s father rejected allegations that the incident was caused by the fact that his son was a bully. Mr Wei said he had never got any complaints about his son by his school or other parents.

On the other hand, Huang’s father insisted that Huang had a mental illness despite the police having deemed him as mentally healthy.

He claimed that Huang had had altercations with Wei before the incident and been beaten by several people.

A police statement obtained by Purple Cow suggested that Huang had brawled with Wei and Wei’s classmates before the incident. 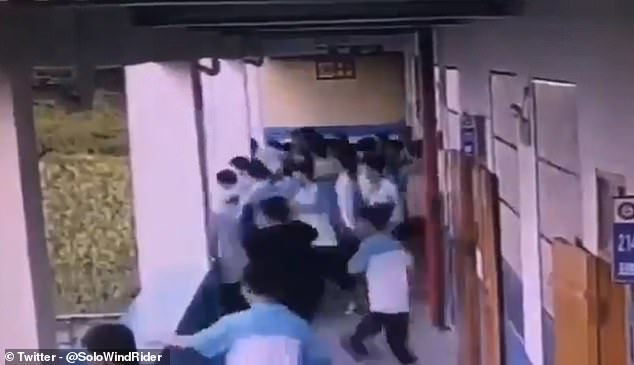 Pupils look in awe after the victim was fell four storeys onto a running track in Guangxi, China 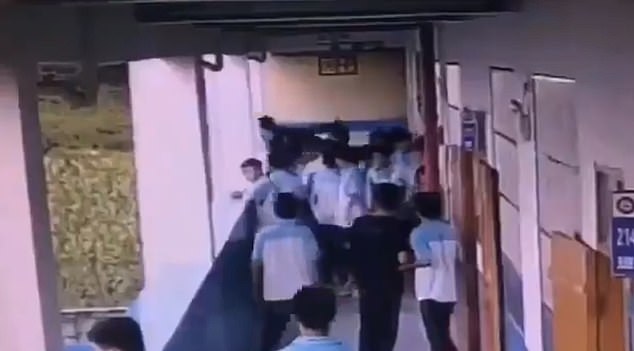 Police said Huang had accused Wei and the others of secretly watching him urinating, which led to the fights.

Police added that Huang lifted Wei and tossed him down the balcony in a fit of rage.

A local court reportedly heard the case on June 17. Huang was charged by public prosecutors with intentional homicide, which includes attempted murder.

Anyone found guilty of the crime is to be sentenced to three to 10 years of imprisonment when the circumstances are relatively minor, according to Chinese criminal law.

These circumstances include causing serious injuries in one person.

Intentional homicide can lead to a death sentence in the most serious cases in the country.

The court is expected to give its ruling in due course.